Mum reveals how she lost 140 kilos in 12 months 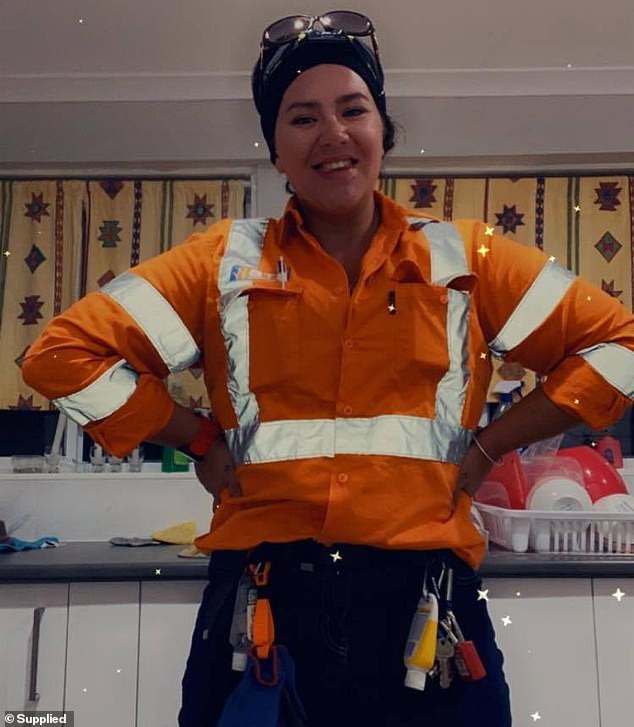 A mum-of-two has revealed how she lost more than 140kg in just 12 months after doctors were able treat mysterious ankle pain which kept the mum ‘drugged up and in a moon boot’ for five years.

Jess Bloomfield, 30, from the NSW central west was 210kg when she refused to hop on the scales again. A year later when she started her weight loss journey she was too embarrassed to measure her weight.

Jess has suffered from chronic regional pain syndrome for six years – any movement, or even a slight breeze can put her in agonising pain.

The 30-year-old was in chronic, excruciating pain for years and when she was she was ‘doped up on drugs’ which made her drowsy and docile

She told Daily Mail Australia the cocktail of drugs she was on to make the pain bearable put her into a fog.

‘I was dizzy all of the time too and couldn’t physically get on the ground and felt like people would take advantage of me because the medicine made me docile,’ she said.

But then she was able to try an experimental drug.

‘I saw a pain surgeon in Sydney and he did research on CRPS and he said this medication will work and wanted to trial me on it.

‘They had previously tried different surgeries, a spinal block and an ankle block, but nothing helped.’

She went from taking over 60 tablets each day to just one, was no longer dizzy and if she feels pain one Panadol is enough.

Jess has to have two more skin removal operations, after losing so much weight. In the first operation doctors removed eight kilograms of skin

As soon as the boot came off the mum was determined to lose the weight.

‘I wanted to do it for my boys, everything I do is for them,’ she said.

‘I had ten miscarriages before I had them and now I can actually go out and play cricket with my eldest or get down on the floor and play with Lego with my youngest,’ she said.

The mum goes on a five kilometre walk every day, has a personal trainer four times a week and does weight training every day.

‘I surprised myself by how quickly I lost it, and surprised the doctors too.’

Standing at 161cm Jess is ‘quite short’ – which means the 220-plus-kg she was carrying around had a huge toll on her body.

She can now walk her kids to school, play with them at the park and even work.

‘I have always dreamed of working with trains and now I am,’ she said.

12 months ago she was wearing size 32 in women’s clothes or 6XL in men’s and wouldn’t have passed the physical.

HOW DID SHE LOSE THE WEIGHT?

After coming out of the walking boot she was able to exercise.

She now goes to the gym every day.

She walks five or six kilometers a day.

She sees a personal trainer four times each week.

She also has a high-protein diet.

‘Now I go into a shop and the ladies get me a ten or 12 and it is really weird,’ she said.

Jess has already had one surgery to remove skin after it started going gangrenous because there was so much excess.

The surgeon snipped away eight kilos of skin.

She has two operations to go and is currently saving up for them.

Her kids and husband are super supportive and proud of how far she has come over the last year – but there’s competition for the title of biggest fan.

‘My sister is ecstatic for me but my grandma has been there every step of the way. I am not sure who has been more supportive, her or my husband, they have both been incredible.’

There’s not a lot known about the pain disorder which left Jess relying on the walking boot for so many years.

‘It is so frustrating that nothing is known about it, I would love to see more research into it after the pandemic,’ she said.

Jess had broken the same ankle when her youngest son was one. It is thought the anesthesia from her hysterectomy triggered the disorder.

‘My sister is ecstatic for me but my grandma has been there every step of the way. I am not sure who has been more supportive, her or my husband, they have both been incredible.’

Pictured here with her husband – the young woman can now get a job, and enjoy being a mum and wife

HOW HAS JESS’ LIFE CHANGED OVER 12 MONTHS?

1 – She has lost 140 kilos officially, but probably more as she didn’t weigh herself for a year before starting her weight loss journey.

2 – She is now working on the railway – a life-long dream.

3 – She is no longer in pain so doesn’t need to wear a walking boot.

4 – Her fitness and mobility have improved greatly.

5 – She can enjoy being a mum and play with her sons, 11 and seven and even take them to school.

‘My foot is always freezing cold and feels like someone has a really tight band wrapped around it,’ she said.

‘The slightest breeze going past my foot had me in tears. The pain is excruciating,’  she said.

The number on the scales has started to level out but the mum’s measurements continue to improve.