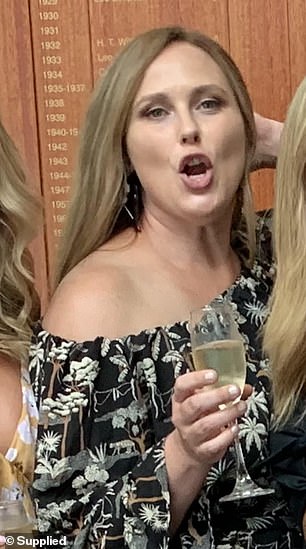 Lucy Quick, 37, pictured here when she still drank, has been sober for two and a half years

A mum-of-two has revealed the moment she knew she had to give up alcohol forever after she ‘blacked out and ruined Christmas‘.

It took Lucy Quick 21 years to realise her relationship with alcohol was toxic.

The 37-year-old never woke up wanting a drink and didn’t consume booze every day but when she did she would often black out, she told FEMAIL.

Sometimes these blackouts were ‘harmless’. She would be having a few glasses of wine at home and not remember how or when she got to bed.

Other times they were far from harmless, and she would have mortifying flashbacks.

The last time Lucy drank – on Christmas Day 2018 – she was ‘enveloped in dread’ when she woke up on Boxing Day and memories of the past 24 hours came flooding back.

She had drunkenly fought with family, fallen over and broken her friend’s front fence and been banned from using Uber.

She had ruined Christmas.

As she sat in the spare room of the home she shared with her husband and two children, she recoiled in shame over her previous night’s drunken antics and decided it was the last time.

That was two and a half years ago.

‘Something inside me shifted that day,’ Lucy said.

‘I was a 35-year-old wife and mum-of-two and I’d just been banned from Uber for reasons I was too drunk to remember.

‘It was pretty clear in that moment that I was falling apart and something had to change.’

Her sister had come to the same conclusion and days later asked if Lucy had ever thought about ‘never drinking again’.

The words were hard to hear but Lucy knew her sister was right, and they were coming from a place of love and worry. 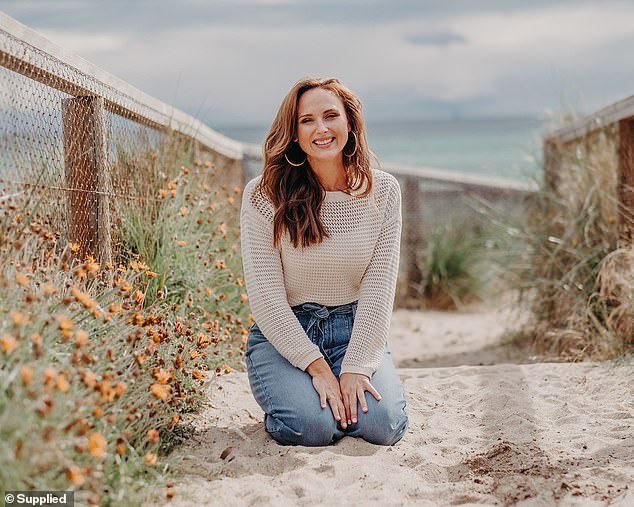 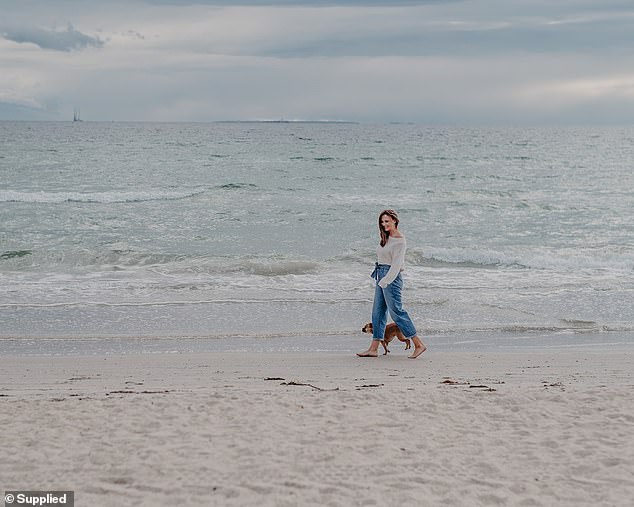 Back then, in Lucy’s mind, someone who had a problem with alcohol woke up craving a drink and drank to excess every day.

But now reflecting on her life she realised she always had had a problem booze since she first started drinking at 14.

Lucy was what she now refers to as a ‘grey area drinker’.

‘I’m sharing my story to let people who are also grey-area drinkers know that there is no shame in it,’ she said.

She was incapable or moderating her alcohol consumption – it was all or nothing.

The weekend was for drinking, blacking out and hangovers – and she was desperately unhappy.

‘I felt like I was broken, my life was 100 per cent not together, despite what everyone thought,’ Lucy said.

‘You don’t need to be an alcoholic to get sober, you just need to look at alcohol and decide whether or not it is serving you.’

Towards the end of her life as a drinker, Lucy would have a few wines to get through bath and story time.

‘My drinking changed after I had kids, it went from being something I did to have fun and let my hair down to being a coping mechanism,’ she said. 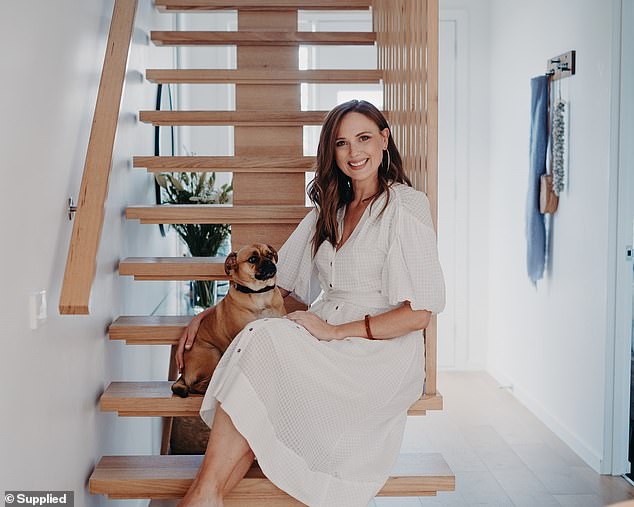 The mum-of-two used to spend her weekends drinking, blacking out and waking up with a hangover… and regrets

Before giving up alcohol Lucy thought being sober translated to being terribly boring.

But her outlook has changed.

‘I found a magic thing in sobriety,’ she said.

‘I thought it would be dull, depressing and sad but instead I found magic, joy and a beautiful life.

‘I realised alcohol had been keeping me small, when actually my life could be limitless,’ she said.

The first few months were difficult and she had to work incredibly hard to get through them but believes she found herself in the process.

‘You have to listen to yourself in those few months and put your sobriety first and protect it with everything you have,’ she said. 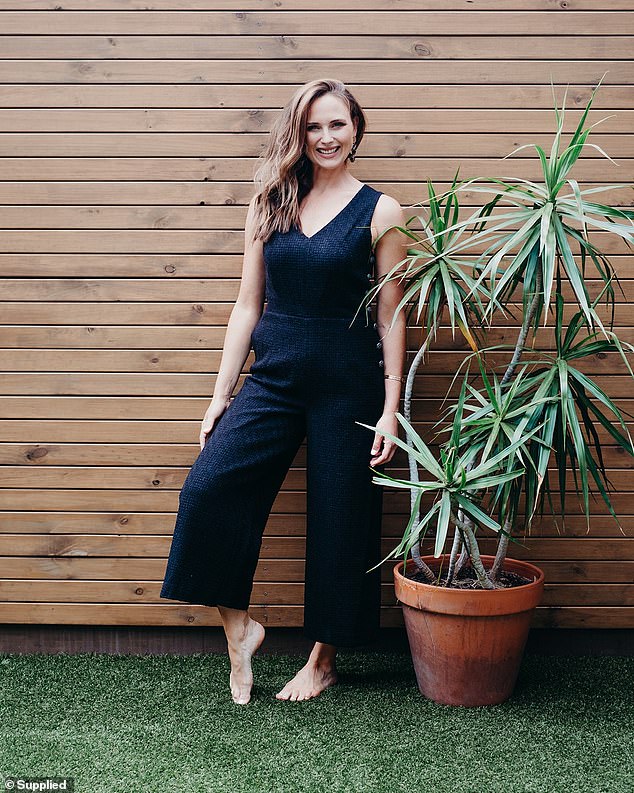 ‘It is all part of the process of rewiring your subconscious. We are conditioned to believe alcohol plays an important role in life.

‘From 21sts and graduations and weddings, it is often a big part of every event.

‘Alcohol equals reward but that’s because that’s what we have learned and we have to work to realise that none of these things require alcohol.’

She admitted that some social events were difficult in the beginning.

‘One night early on I went out with girlfriends and I felt like an outsider, they were doing shots and I was just standing there watching – I don’t go to those nights anymore,’ she said.

Now she prefers to cuddle up on the couch in the evening with a cup of tea.

This comes after bath time and story time, which she now enjoys. 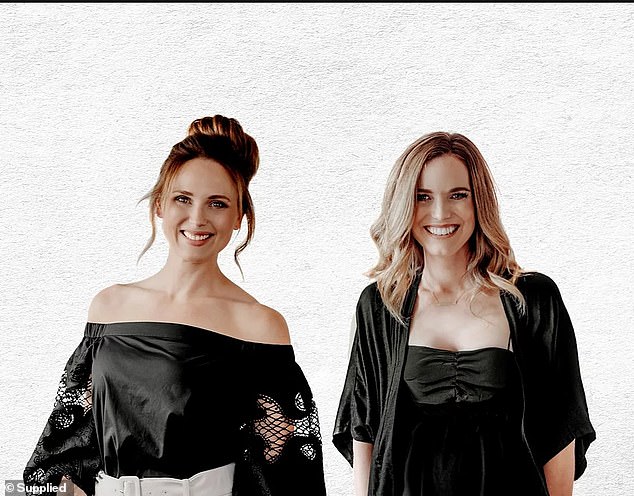 She runs ‘ Thrivalist ‘ alongside her business partner Jen Clements, who has also found a better life after becoming sober

Lucy wakes up at sunrise every morning and lives an active life, fuelled by energy instead of lethargy and a sore head from drinking.

‘It has been a full life transformation, I am now living the life I always wanted to,’ she said.

Lucy quit her job after becoming sober as it no longer aligned with her values and she wanted to follow her dream of helping people.

She now runs ‘Thrivalist‘ alongside her business partner Jen Clements, who has also found a better life after she became sober.

Thrivalist supports other women by helping them overcome their drinking problems in an empowered way.

The private online community has programs that women across the globe can access to help them get sober, stay sober and build a joyous life.

‘I honestly hated myself and often refused to look in the mirror,’ Lucy said.

‘Now I love myself, I have this huge zest for life and so much energy.

‘Life is just so much fun.’ 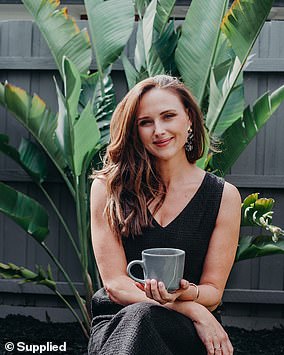 1 – Work out why you are drinking and identify triggers. Plan nights ahead of time so that you aren’t affected by these triggers.

2 – Find and join a great sober community to help you through. That can include a Facebook community like the one run by Thrivalist.

3 – Embody the life of a healthy non-drinker and work out what you need to change or add to your life to achieve that.

4 – Identify your strengths as a person and do more of whatever it is that makes you feel good.

5 – Build a positive mindset this helps you to support yourself more holistically.

A THIRD of children who suffer a concussion develop anxiety, depression or other issues, study says

Beauty: A Hate Story, The End