‘I need to try this’: Mum wows hundreds with her genius ‘toy jail’ idea to teach her children to tidy up

An Australian mum has impressed hundreds of other parents online with her clever ‘toy jail’ idea to encourage her children to tidy up.

Posting to a popular Facebook group, the woman made the ‘toy jail’ using a large plastic box and labelled it with rules on top.

The rules written with black permanent marker read: ‘You left it out and I picked it up. I’ve got your stuff, you’re out of luck. To get it back, please do a chore. Then it’s yours, just like before.’ 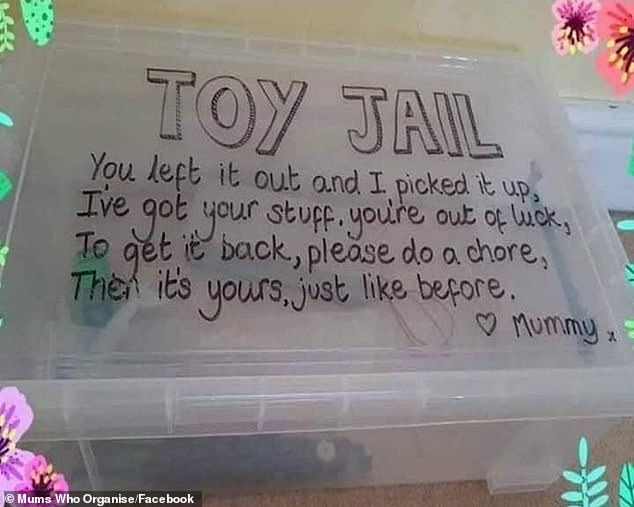 Posting to a popular Facebook group, the woman made the ‘toy jail’ using a large plastic box and labelled it with rules on top (pictured)

The clever idea encourages the children to avoid leaving their toys lying around the house and also teaches them discipline if they don’t take care of the belongings.

Other parents part of the online Facebook community praised the woman for sharing the creative idea.

‘OMG this is brilliant, I am stealing this idea,’ one mum said.

‘We do this, [but] have a jar that has job cards inside,’ another said, a third added: ‘Love this!’

But some mums said the trick hasn’t worked with their children who are only entertained by the idea of the toy jail.

‘Tried it, kids thought it was cool to have toys in jail so they thought to put more toys in there,’ one mum said.

‘If only my kids could read!’ another added.

A third said she’s eager to try it when her kids are older and can understand the concept.