India‘s coronavirus epicentre has been plunged into a state-wide weekend lockdown as the country battles exploding infection numbers and shortages of vaccines, drugs and hospital beds.

Having let its guard down with mass religious festivals, political rallies and spectators at cricket matches, India is experiencing a ferocious new wave with around a million new cases in the past week.

After a lockdown a year ago caused widespread misery and one of the sharpest downturns of any major economy, the central government is desperate to avoid a hugely unpopular second shutdown.

But many states are tightening the screw, in particular Maharashtra and its capital Mumbai, where restaurants are shut and public gatherings of more than five people are banned – which has left the city’s streets deserted.

Every weekend until the end of April the state’s 125 million people are confined to their homes unless shopping for food, medicine or travelling.

It comes after India reported a record 145,384 new Covid-19 cases on Saturday and the highest number of deaths in more than five months, as it grapples with an overwhelming second-wave of infections.

India’s overall case load has swelled to 13.21 million, the third-highest globally, behind the United States and Brazil.

The country has reported the most number of cases in the world in the past week, breaching the 100,000 mark for the first time on Monday and four times after that.

The government blames the resurgence mainly on crowding and a reluctance to wear masks as businesses have nearly fully reopened since February, only to be partially shut again to control the current surge. 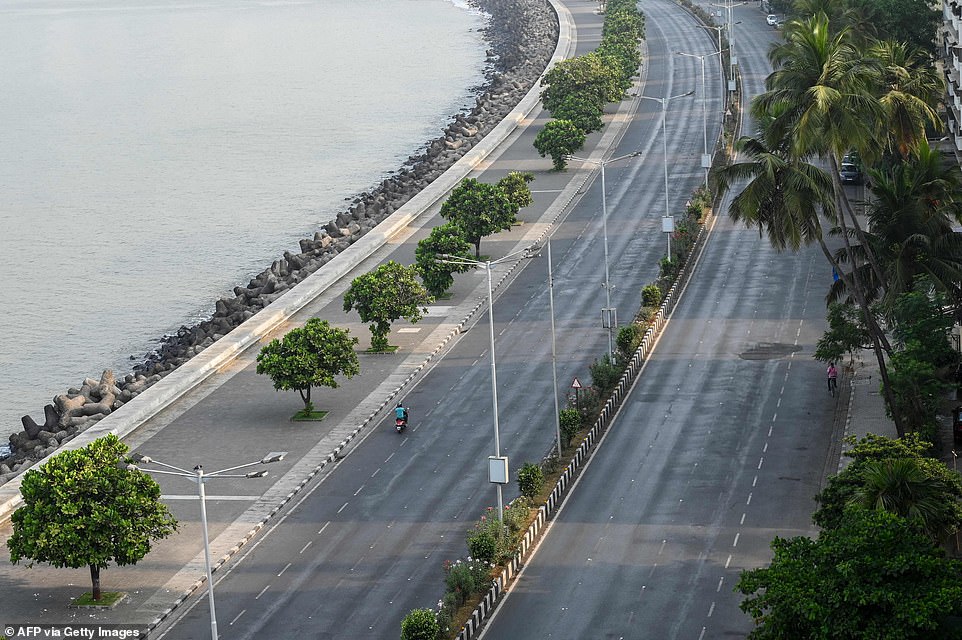 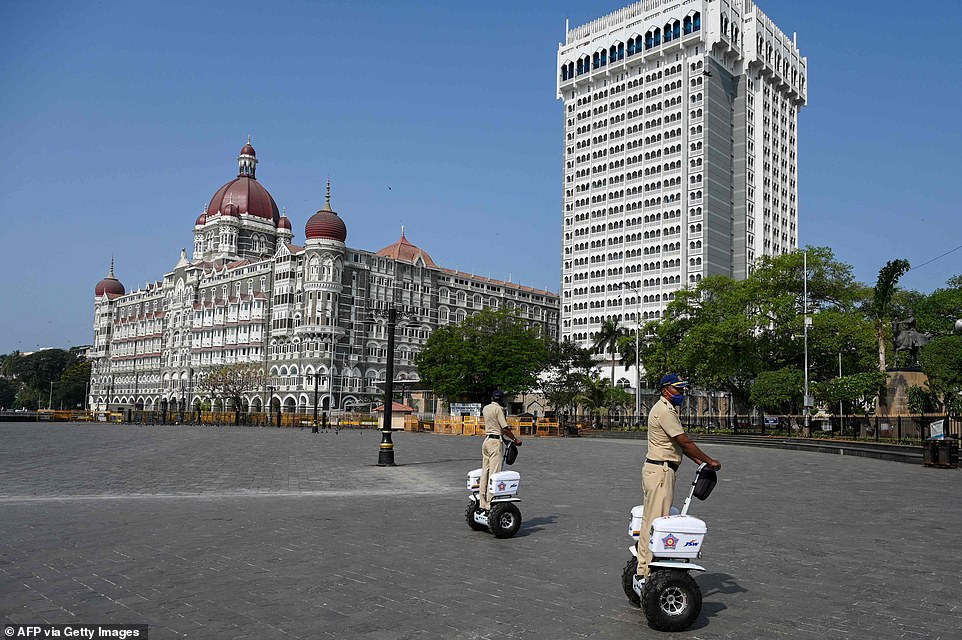 Maharashtra, and its capital Mumbai, has seen restaurants shut and public gatherings of more than five people banned(police patrolling outside the Taj Mahal Hotel in Mumbai)

Fresh lockdowns and curfews have been imposed in India as Covid-19 infections surged again and vaccine roll-outs were hampered by shortages and scares over side effects.

The country’s worst-hit state of Maharashtra has already shut down restaurants, malls and places of worship and barred the movement of most people to control the outbreak that has threatened to overrun medical facilities and created vaccine shortages, officials said.

Its weekend lockdown, that began at 8pm on Friday, will end at 7am on Monday.

In India’s financial capital Mumbai, hundreds of poor migrant workers crammed onto trains this week to flee the city, potentially risking a wider outbreak in smaller towns and villages.

The railways department denied people were fleeing cities because of the surge, calling it a usual rush this time of year because of holidays and as workers move to harvest crops.

‘I’m not for the lockdown at all but I don’t think the government has any other choice,’ media professional Neha Tyagi, 27, told AFP in Mumbai.

‘This lockdown could have been totally avoided if people would take the virus seriously.’ 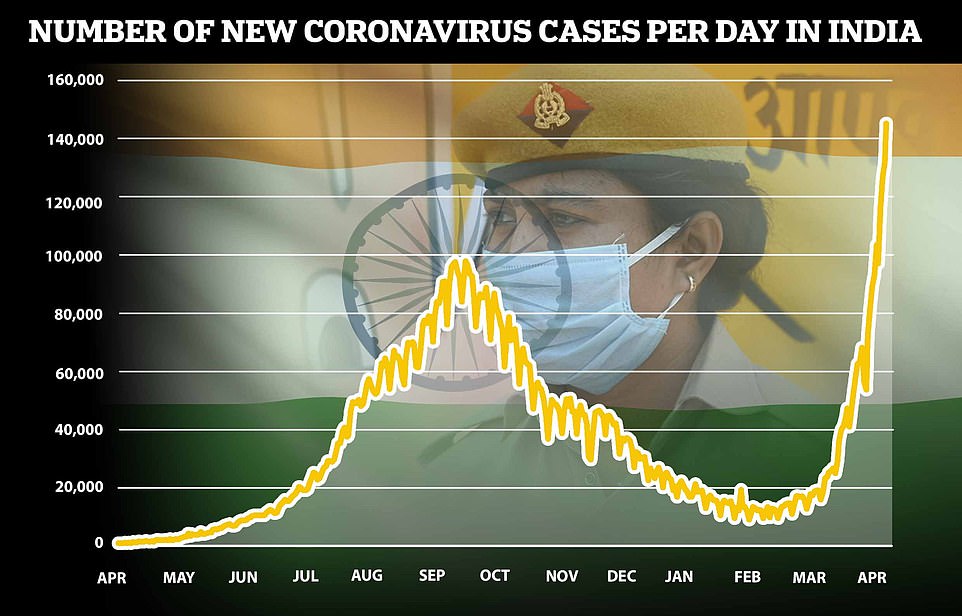 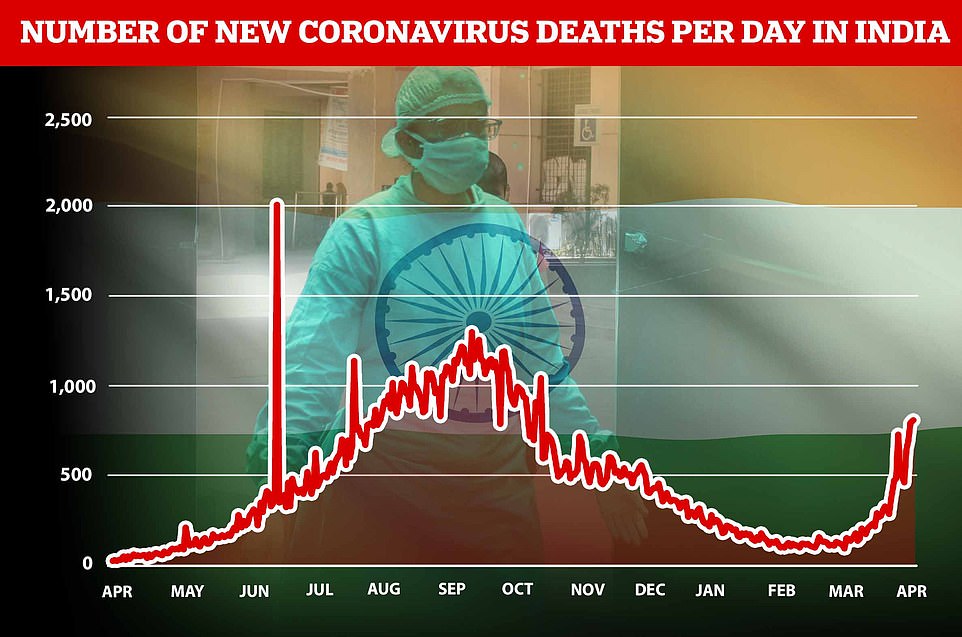 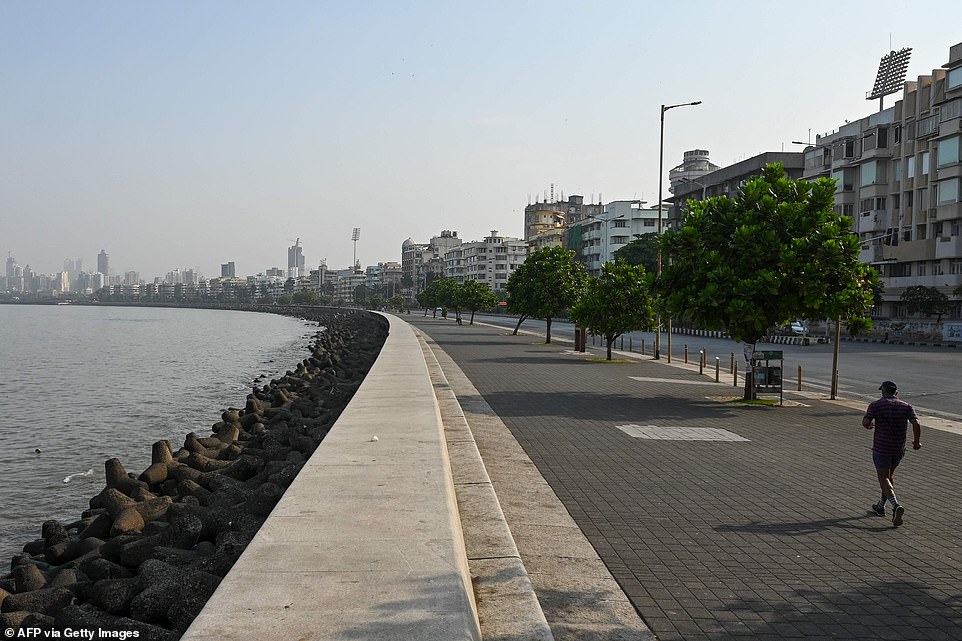 Every weekend until the end of April the state’s 125 million people are confined to their homes unless shopping for food, medicine or travelling (Mumbai pictured) 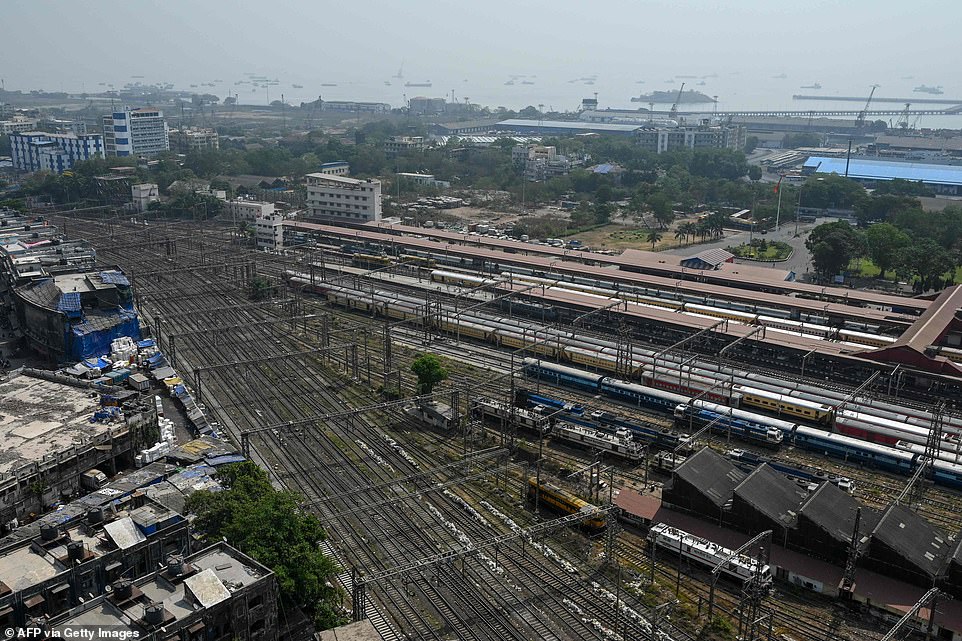 With the country grappling with the new surge, cricket is now being played behind closed doors – including the big-bucks Indian Premier League, which began Friday – and in many regions including in New Delhi and Bangalore a night curfew is in force.

Election rallies in West Bengal are going ahead however, as is the colossal Kumbh Mela religious festival in Uttarakhand with millions expected next week by the holy Ganges river.

Virus tests are in theory compulsory there, but chief minister Tirath Singh Rawat has said pilgrims will not be ‘unnecessarily harassed in the name of Covid-19 restrictions’.

Raipur district, home to the capital of Chhattisgarh state, is under a 10-day lockdown with no one allowed to enter the area unless performing essential services.

But India has been running out of vaccines as the health system buckled under the weight of the contagion which has killed 2.9 million people worldwide.

India has so far inoculated 94 million of its 1.3 billion people but  stocks running low, according to local authorities.

In megacity Mumbai, all 72 private vaccination centres were shut until Tuesday while opening hours were reduced at government and municipal centres, authorities said. 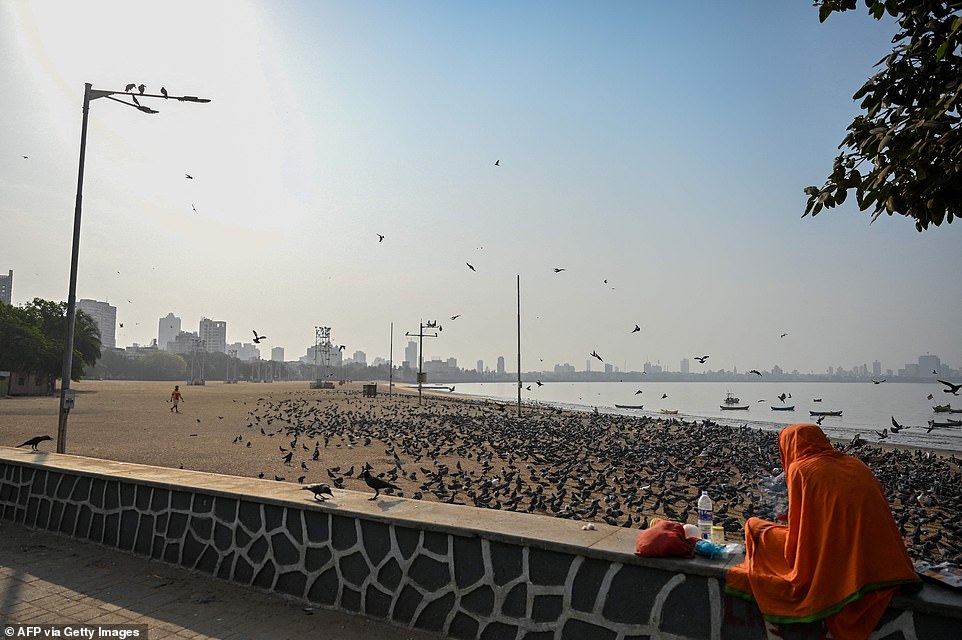 The country’s worst-hit state of Maharashtra has already shut down restaurants, malls and places of worship and barred the movement of most people to control the outbreak that has threatened to overrun medical facilities and created vaccine shortages, officials said (Chowpatty beach in Mumbai pictured) 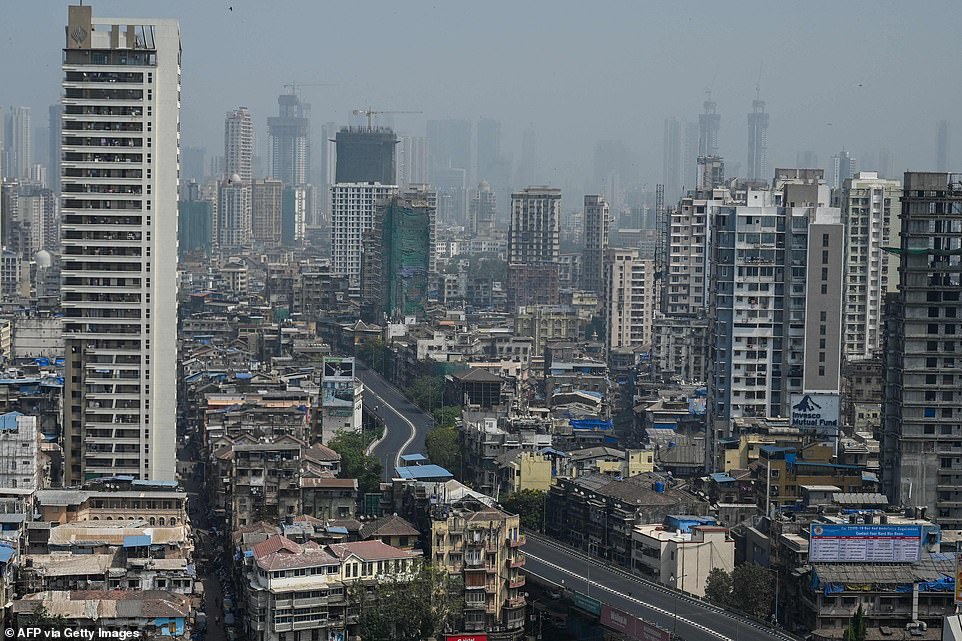 Maharashtra’s weekend lockdown, that began at 8pm on Friday, will end at 7am on Monday (deserted streets in the capital of Mumbai pictured)

West Bengal’s health chief Ajoy Kumar Chakraborty told AFP that a number of vaccination centres in the eastern state have been shut because they ran out of stock.

‘Some hospitals have started rationing their doses from Friday fearing that stocks may run dry,’ he said.

The Times of India reported Friday that states on average had just over five days of stock left even as vaccine makers scramble to increase output.

But the federal health minister has accused some states – run by opposition parties – of playing politics to ‘distract attention from their failures’.

‘It is not right to say that there is a vaccine shortage. Vaccines have been made available to all states according to their needs,’ Home Minister Amit Shah said on Friday.

The CEO of the Serum Institute of India, the world’s biggest vaccine maker by volume, has warned that production capacity is ‘very stressed’.

Poorer countries, as well as some rich nations, have relied heavily on Serum for supplies of the AstraZeneca vaccine, but last month New Delhi put the brakes on exports to prioritise domestic needs.

A lull in demand from December to February led to low or zero production for three months, the Indian Express cited Remdesivir manufacturers as saying.

On Saturday, India reported 145,000 new cases, a new record taking the total to 13.2 million with 170,000 deaths. Per-capita rates are lower than many other nations however.

Food: People expect chocolate to taste more BITTER if it is in black packaging, study finds

Food: People expect chocolate to taste more BITTER if it is in black packaging, study finds