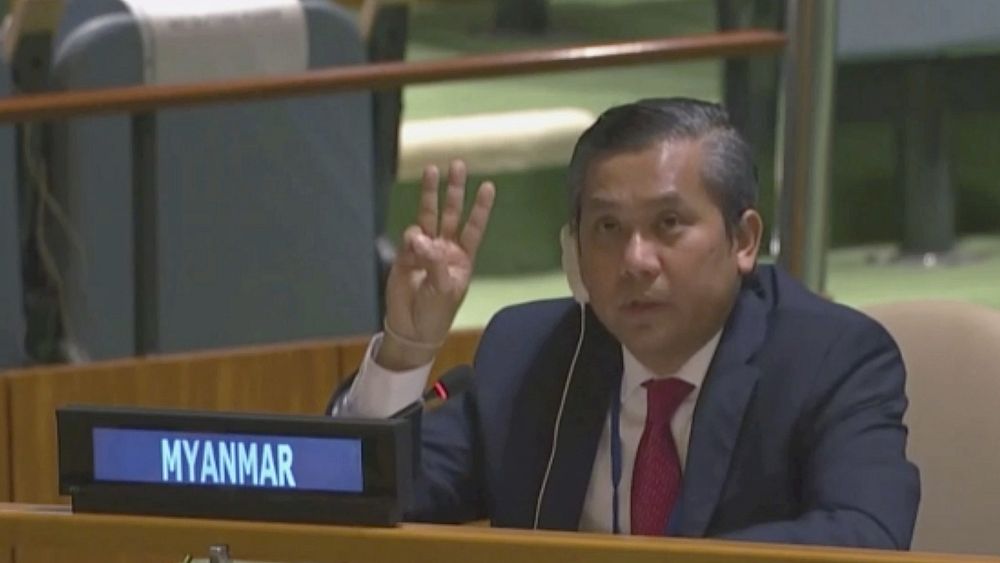 Myanmar”s military rulers have said they removed the its U.N. ambassador from his role after he made an impassioned speech on Friday opposing the military coup in his country.

State television said he “betrayed the country and spoken for an unofficial organization which doesn’t represent the country and had abused the power and responsibilities of an ambassador”.

Ambassador Kyaw Moe Tun decried the military coup and appealed for the “strongest possible action from the international community” to immediately restore democracy.

His dramatic speech to the U.N. General Assembly drew loud applause from many diplomats in the 193-nation global body.

Tun began his statement by saying he represented Aung San Suu Kyi’s “civilian government elected by the people” in November and supported their fight for the end of military rule.

He urged all countries to issue public statements strongly condemning the Feb. 1 coup, and to refuse to recognize the military regime and ask its leaders to respect the free and fair elections in November won by Suu Kyi’s National League for Democracy party.

“It is time for the military to immediately relinquish power and release those detained,” Tun said, agreeing with U.N. Secretary-General Antonio Guterres that military coup “is not acceptable in this modern world and the coup must cease.”

His voice cracking, he ended his statement by addressing people back home in Burmese and raised a three-finger salute that has been adopted by the anti-coup movement.

Tun’s surprise statement not only drew applause but commendations from speaker after speaker at the assembly meeting including ambassadors representing the European Union, the Organization of Islamic Cooperation and the new U.S. ambassador, Linda Thomas Greenfield who she joined others in describing the speech as “courageous,” “powerful” and “brave.”

In her first appearance at the assembly since presenting her credentials to Guterres on Thursday, Thomas-Greenfield said the United States “stands in solidarity” with the people of Myanmar who are in the streets protesting the coup.

She reiterated President Joe Biden’s warning that “we will show the military that their actions have consequences” and demand to the military “to immediately relinquish power.”

In a tweet later, U.S. Secretary of State Antony Blinken referred to Myanmar by its former name Burma and said “the United States commends the courageous and clear statement” of Ambassador Tun, “and by those in Burma who are making their voices heard. We must all heed their call to restore democracy in Burma.”

The assembly meeting was called to hear a briefing from the U.N. special envoy for Myanmar, Christine Schraner Burgener, who said it is time to “sound the alarm” about the coup and the military pushing democratic processes aside, violating the constitution, reversing reforms instituted by Suu Kyi, and arresting peaceful protesters, civil society representatives and members of the media.

She pointed to restrictions on the internet and communication services and the detention of about 700 people according to the Assistance Association for Political Prisoners in Myanmar, and she called “the use of lethal force and rising deaths unacceptable.”

The huge protests in the country are not about a fight between Suu Kyi’s party and the military, she said, “it is a fight without arms.”

Addressing diplomats in the General Assembly chamber by video link, Schraner Burgener urged “all of you to collectively send a clear signal in support of democracy in Myanmar.”

The military takeover in Myanmar shocked the international community and reversed years of slow progress toward democracy.

Suu Kyi’s party would have been installed for a second five-year term that day, but the army blocked Parliament from convening and detained her, President Win Myint and other top members of her government.

Myanmar’s military says it took power because November’s election was marked by widespread voting irregularities, an assertion that was refuted by the election commission, whose members have since been replaced by the ruling junta. The junta has said it will rule for a year under a state of emergency and then hold new polls.