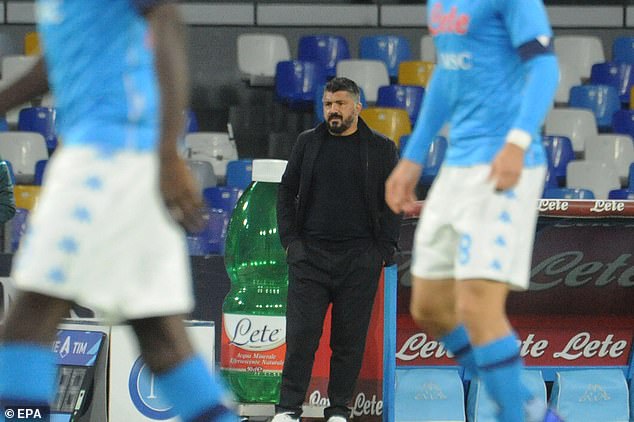 Napoli have been rocked by reports that the dressing room allegedly had a heated confrontation with boss Gennaro Gattuso, placing his future at the Serie A side in doubt.

The Neapolitan side were humbled 3-1 against a Zlatan Ibrahimovic-inspired AC Milan and reports in Italy soon emerged that strong words were exchanged between players and coach after his forthright views regarding accountability for the loss in the post-match press conference.

Gattuso was reportedly ‘scolded’ by his dressing room in a dramatic scene reminiscent of a Sceneggiata Napoletana, a musical drama popular in the region of Naples.

The reports of a bust-up, which were officially denied by the club on Tuesday, come a year on from the club being left at civil war under Carlo Ancelotti’s reign.

Ancelotti, one of the game’s most experienced managers, was left fighting for control against his dressing room over a desire to stay at the training ground following a poor run of results.

A refusal from players caused major friction with owner Aurelio de Laurentiis and it took weeks for moods to calm down and the animosity to cease.

Ancelotti’s tenure never recovered from the row after a Champions League game with Red Bull Salzburg and it remains to be seen how Gattuso reacts following reports of a major clash with his players.

Gattuso, a former team-mate of Ibrahimovic, overhauled the dressing room with new faces and he elected to let experienced players like Brazilian midfielder Allan depart.

Games in Serie A unless stated

But, it appears, history is beginning to repeat itself in the south of Italy.

According to ‘Corriere dello Sport’ Gattuso had a ‘very strong clash’ with some of the most important players at the club following the third consecutive defeat at Stadio San Paolo.

Kalidou Koulibaly, Dries Mertens, Mario Rui and Fabian Ruiz are foundation pieces of this side and they all fell short of expectations in the big match against Milan.

But, those four players reportedly fear that Gattuso’s words against the team’s attitude against Milan could lead fans to identify them as negative figures in the dressing room.

‘It’s not a coincidence that we create so many chances in these games and don’t take them. We have to focus on what we’re doing, get the job done, that’s the main problem,’ Gattuso explained in defeat.

‘We think too much about what’s missing, what we don’t do, what went against us. It’s not bad luck. It’s that we don’t approach these games with the right determination, because technique and quality aren’t enough.

‘I’ve been talking about this for months now. I see an attitude I don’t like and it hurts me. We need to sort this aspect out as soon as possible.’

It was the final remark which reportedly left players furious, leaving it open to the interpretation of fans as to where the negative attitudes that Gattuso speaks of are coming from.

Gattuso was a notoriously tough player in his day and he wants to see his players play with a knife between their teeth, he wants angry pirates and not sailors with clean suits on.

His record as coach is not terrible. He has lost 12 games out of 40 played to date, working out to roughly one for every 3.3 games played.

But, in comparison to last season, Napoli are two points worse off this year and that has left Gattuso very disappointed.

Gattuso appears to feel he is not getting the same level of aggression and fight on the pitch that he provided as a player.

Reports go on to say that not one of the players liked his post-match words on television, not even players who remained on the bench for the defeat against Milan.

The players are said to be fearful that his words will create problems in the city with the fans – particularly given the division which emerged from their last mutiny over salary and they absolutely do not want to experience the same level of hatred towards the team.

Zlatan Ibrahimovic (middle), a former team-mate of Gattuso, was the star in Milan’s victory

The Corriere dello Sport report goes on to add that a clear-the-air briefing happened immediately after the loss to Milan in which players explained that they will no longer tolerate strict reprimands in front of the television cameras.

Ten months ago, back in January, there was a very strong confrontation after Napoli-Fiorentina, and Napoli went on to win the Coppa Italia. With Gattuso a superstitious character, he will likely hope many triumphs will follow once again.

Gattuso’s current deal expires at the end of the 2020-21 season and he has yet to reach an agreement about signing an extension.

Talk of the clash post-Milan has not sat well with the club as they issued a strong rebuttal, about what they describe as an ‘invention’.

‘On some sites yesterday and in some newspapers today, the story, completely invented, suddenly appeared,’ Napoli wrote in a statement on social media.

‘About a heated argument between the Napoli players and Rino Gattuso allegedly took place. We are dealing with a story without any truth.’