NASA‘s OSIRIS-REx spacecraft is getting ready to reach out its robotic arm and collect a sample from the asteroid Bennu’s surface on Tuesday evening.

As of 5pm Tuesday EST the spacecraft was activating its sensors and instruments as it further descended into the orbit of the asteroid that contains material from the early solar system and could provide insight into the origin of life on Earth.

As of 5.38 PM ESP the spacecraft steered to the proper orientation for final descent, with its 11-foot arm and cameras pointed towards the asteroid’s surface.

NASA’s OSIRIS-Rex spacecraft has been orbiting Bennu for nearly two years. In the meticulous 4.5-hour descent, the spacecraft will touch down briefly for a handful of seconds on space rock with its arm in a landing site called Nightingale.

The craft will shoot out pressurized nitrogen gas to stir up the surface and suck up about 2 grams (60 grams) of loose pebbles or dust. Contact is anticipated to last just five to 10 seconds before the spacecraft backs away.

‘We’ll only be kissing the surface with a short touch-and-go measured in just seconds,’ the University of Arizona’s Heather Enos, the deputy scientist for the mission, said. 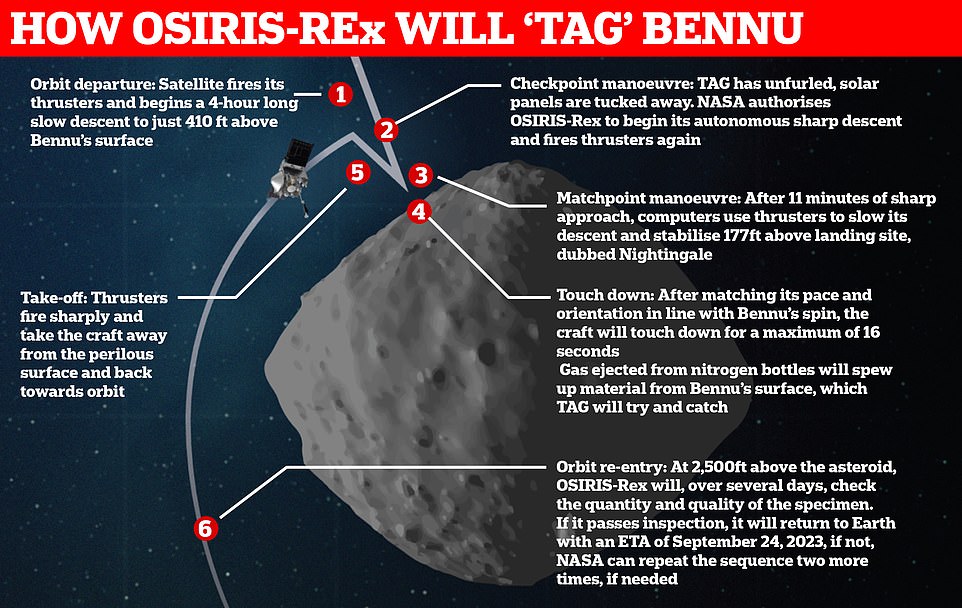 OSIRIS-REx will touch down for a handful of seconds on asteroid Bennu following a carefully orchestrated 4.5 hour descent. Van-sized, the craft will land at 22:00 BST (17:00 ET) on October 20 in an area dubbed Nightingale

Nightingale is a 52ft location in the northern hemisphere of the small asteroid, which is less than a third of a mile in diameter.

Once the sample is collected the spacecraft will launch back into space and will reach Earth in 2023.

This is America’s first attempt to gather samples from an asteroid, something already accomplished by Japan — twice.

BUILDING BLOCKS OF LIFE MAY BE IN BENNU BOULDERS

Asteroid Bennu may contain the building blocks of life within its ‘rubble-pile’ surface, and the body was once part of a much larger, water covered world, scientists claim.

NASA‘s OSIRIS-Rex mission will land on Bennu on October 20 to collect samples of the space rock. 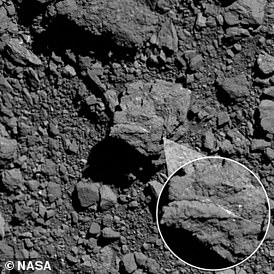 As part of the preparations for this mission, six research papers have been published looking at the history and make-up of the near Earth asteroid.

One of those papers  found evidence of carbon-bearing and organic materials widespread across the surface of Bennu.

These materials were found in veins running through rocks and had to be formed as a result of free flowing water that was on the larger, long destroyed celestial body that created Bennu.

This is the first confirmed detection of these building blocks of life on a near-Earth asteroid.

Bennu’s gravity is too low for the spacecraft to land — the asteroid is just 1,670 feet (510 meters) across. As a result, Osiris-Rex has to reach out with its 11-foot robot arm while dodging boulders the size of buildings, and attempt to grab at least 2 ounces of Bennu.

The Nightingale site has been chosen because it poses one of the clearest areas on the asteroid’s surface with best access to fine-grained material.

However, there are building-sized boulders surrounding the site, leaving a spot the size of only a few parking spots in which to land.

If the landing goes even slightly awry, OSIRIS-REx will find itself in treacherous territory, NASA explained.

‘Next time you park in front of your house or in front of a coffee shop and walk inside, think about the challenge of navigating Osiris-Rex into one of these spots from 200 million miles away,’ said NASA´s deputy project manager Mike Moreau.

Once it drops out of its half-mile-high orbit around Bennu, the spacecraft will take a deliberate four hours to make it all the way down, to just above the surface.

Then the action cranks up when Osiris-Rex´s 11-foot arm reaches out and touches Bennu with contact lasting about 10 seconds.

Bennu sits between Earth and Mars at a distance approximately 207 million miles (334 million kilometers) from our planet.

Because of this, it will take about 18.5 minutes for signals to travel between OSIRIS-REx and NASA headquarters.

Programmed in advance, the spacecraft will operate autonomously during the unprecedented touch-and-go manoeuvre.

With an 18-minute lag in radio communication each way, ground controllers for spacecraft builder Lockheed Martin near Denver can’t intervene.

This means a manual landing is impossible, with all hopes of a successful landing hinging on the on-board autonomous system.

This will be the largest sample selection since the Apollo missions, which had the bonus of much more funding and humans on the surface to aid collection.

Should the collection of Bennu’s surface material be successful, it will be returned to Earth on September 24, 2023.

While NASA has brought back comet dust and solar wind particles, it’s never attempted to sample one of the nearly 1 million known asteroids lurking in our solar system until now.