“She is one of the reasons why I am determined to always make my family proud.”

Southampton winger Nathan Redmond is talking about his mother, Michelle, the biggest influence in his life.

Had it not been for her overwhelming love and support, Redmond might not be walking out at Wembley in an FA Cup semi-final this weekend.

Prior to making his debut for hometown club Birmingham City at the age of 16, and while he was still studying for his GCSEs, Redmond was training alongside Lee Bowyer, Barry Ferguson and Stephen Carr after being elevated to Alex McLeish’s first-team squad.

“There were times I didn’t want to go back to training because I was getting kicked every day,” he tells BBC Sport.

“Sometimes I’d come home crying because all these tough players kicked lumps out of me. The support of my mum, and a few other players in that group, enabled me to get through it.”

Since surviving Birmingham’s school of hard knocks, Redmond has gone on to score 27 goals and provide 20 assists in 229 Premier League appearances. He has scored in a Championship play-off final and played – albeit for only 20-odd minutes – for Gareth Southgate’s England.

Michelle, who worked six days a week and juggled two jobs as a single parent, has been there encouraging, coaxing and screaming from the moment he first kicked a football.

“She put me in a position to live out my dreams,” adds Redmond, who hopes to inspire Southampton to reach a first FA Cup final since 2003 when they face Leicester City on Sunday.

Michelle was at St Andrew’s in August 2010 when her son made a 12-minute substitute appearance against Rochdale at the start of a League Cup run that would end with Blues lifting the trophy after beating Arsenal at Wembley.

Watching him make his first-team debut aged 16 years and 173 days was reward for all the hours she had put in to provide for him and his younger brother, Niall.

“She’d work all week and Sunday was her only day off,” says Redmond, who was on Birmingham’s books from the age of eight until 19 when he joined Norwich, then in the Premier League, in a Â£3.2m deal in 2013.

“But Sunday was also match day when I was growing up. Mum used to work late on a Saturday and sometimes when it was time to leave for my game early the next morning I would find her asleep on the sofa still in her work clothes.

“She’d still drop me off at home games, pop home for a shower, change and come back and watch.

“If it was an away game and I was on the team coach, she’d chase it down the motorway and call one of the coaches to tell him to pull over at a service station so she could hop on and watch us play.

“I didn’t understand the sacrifices she made until later.

“I was on the bench and travelling with the first team to away games just before I sat my GCSEs. When you’re a kid you think ‘there’s no point, I’m going to be a footballer’ but my mum made sure I sat them.

“I can’t remember how many GCSEs I passed. I didn’t get a clip around the ear so I guess I did quite well.”

Although training alongside the likes of Bowyer, now Birmingham’s manager, and other senior professionals proved a bruising experience for the schoolboy trying to impress, Redmond quickly learned to toughen up.

“The type of player you were trying to be, they weren’t really interested because they were fighting for their place and you’re just a young kid trying to prove you can be in the team,” he adds.

It taught Redmond, who would be in the gym at 6am to work on strength and fitness, to move the ball quicker and hone his first touch, traits which have served the 27-year-old throughout a career which has also included a League Cup final appearance in 2017.

“Once I started playing in Birmingham’s first team, the players who kicked lumps out of me in training were protecting me in games,” says the scorer of 10 goals in 38 England Under-21 appearances. 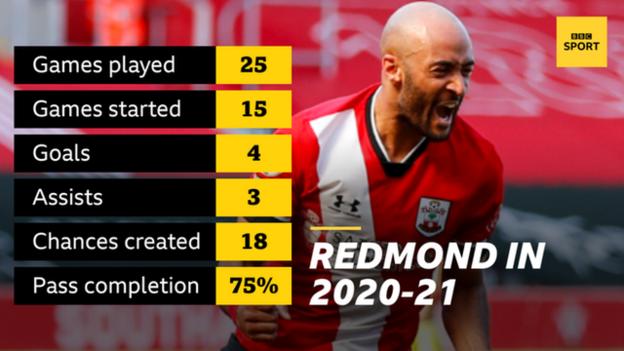 ‘I’m my own biggest critic’

Southampton go into the semi-final on the back of a disappointing 3-0 defeat at West Brom, although Redmond has been involved in five goals in his past three games – three goals and two assists – which has netted the Right To Play charity Â£5,000.

He is an ambassador for the international organisation, which uses sport and play to educate disadvantaged children around the world, and in 2019 visited Ghana to see their work.

As well as donating a lump sum to the charity, Redmond forwards Â£1,000 each time he scores or assists in a game.

Now in his fifth season at St Mary’s, the winger nicknamed “Reddy” by manager Ralph Hasenhuttl is one of Saints’ most experienced players after joining from Norwich for Â£10m in 2016, and is a “big brother” figure to Michael Obafemi, Southampton’s 20-year-old Republic of Ireland forward.

Redmond also helped Che Adams settle when he arrived in 2019, with both being former Birmingham players.

It has not all been straightforward for Redmond, who has been criticised by fans during periods where he has suffered from a loss of form and confidence.

“As much as you get criticised by fans or pundits, I think you, as a player, are your own biggest critic at heart,” says the man who has been involved in more FA Cup goals for Southampton than any other since he joined.

“I’ve won player of the season but there have been times I haven’t played too well. I’m trying to focus on being more consistent.”

Having appeared as a substitute in Southampton’s defeat to eventual winners Chelsea in 2018, this will be Redmond’s second FA Cup semi-final.

Whatever Sunday’s outcome, Redmond’s nan, Jenny, knows her grandson has already “made it” in life.

In 2018 he appeared on an episode of the BBC’s long-running TV sports quiz show A Question of Sport.

“I’d been in a first-team environment for 10 years, played for England, and won a play-off final, but my nan would say ‘you’ve not made it unless you’ve appeared on A Question of Sport’,” he laughs.

“After the episode aired she called me and said ‘Nathan, everything is fine – you’ve made it now’.”