Nathan, the aquatic cat has been spotted in crystal clear water on a beach in Elliot Heads, QLD

Domestic cats and water don’t normally go well together, but one beach-loving feline is defying the common stereotype and has been spotted making a splash.

Nathan, a rescue animal, was filmed in Elliot Heads, Queensland, taking a leisurely stroll in crystal clear shallow water, as her owners walk along the shore.

Nathan was adopted from the Queensland RSPCA by owners Rian and Melissa after she was found in a box in early 2017 and was soon introduced to the beach.

Swimming is not uncommon for the Instagram famous feline, who has amassed a staggering 539,000 followers.

Clearly, the kitten found her happy place, and her social media page is littered with videos of the family frolicking in the water together. 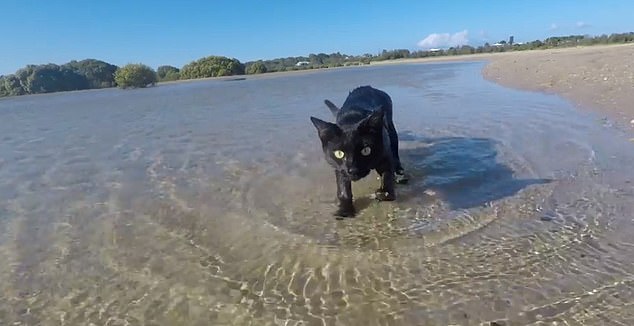 Nathan (pictured), the water-loving feline, has been captured taking a quick dip in an Elliot Heads beach, in Queensland, with owners Rian and Melissa

One user wrote: ‘See how calm they are even in the midst of water! Mine would run away if one drop of water fell on them’.

‘You’re so cool my furry friend, I’m always impressed when I see you in the water,’ another added. 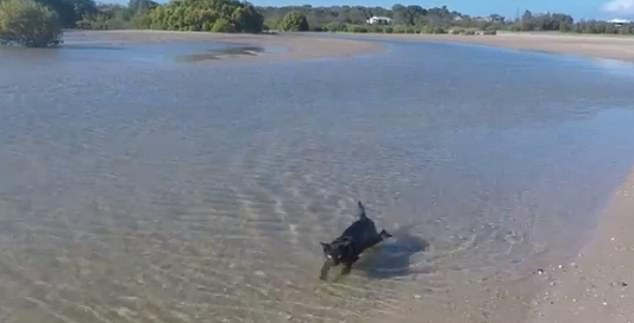 Nathan was first introduced to water when her outdoor loving owners adopted her from a Queensland RSPCA, after being found in a box on the side of a highway 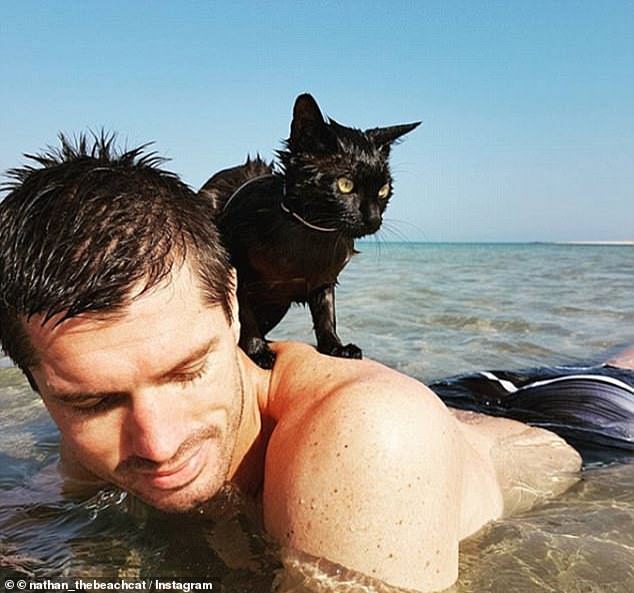 The water-loving cat (pictured with owner Rian) is Instagram famous, boasting 539,000 followers and a loyal fan base of people who love watching her aquatic adventures

Many people asked the question, why did Rian and Melissa choose the name Nathan for a female cat?

‘At first it was just a joke before we got her,’ they told Daily Mail Australia previously.

‘The name Nathan is the name of a character from a show my partner and I have watched called Angry Boys.

‘Once we brought her home we actually quite liked the name and it stuck, despite not really being a girl’s name.

‘It still makes us laugh sometimes and we can’t imagine her being named anything else!’

How to quit smoking: 5 actions you can take now to stop

The soundtrack of the 2020 Masters will be different without patrons

Nathaniel Rowland, 27, was additionally discovered responsible of kidnapping and possession of a weapon throughout a...