Klay Thompson scored 17 points on his return from two devastating injuries that sidelined him more than two-and-a-half years, helping the Golden State Warriors beat the Cleveland Cavaliers 96-82 on Sunday night.

Thompson was seven of 18 from the field and three of eight from three-point range. He added three rebounds, an assist and a steal in 20 minutes, walking off the court to a thunderous ovation followed by chants of ‘Klay! Klay!’ from the Chase Center crowd.

Stephen Curry had 29 points, five rebounds and five assists, and Jordan Poole added 14 points for Golden State. The Warriors snapped a two-game losing streak to tie Phoenix for the NBA lead at 30-9. 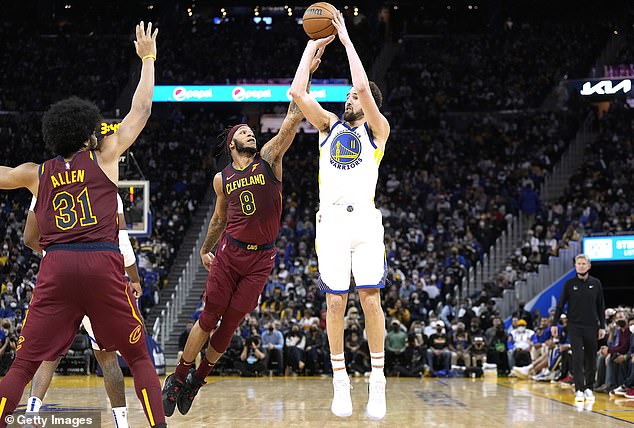 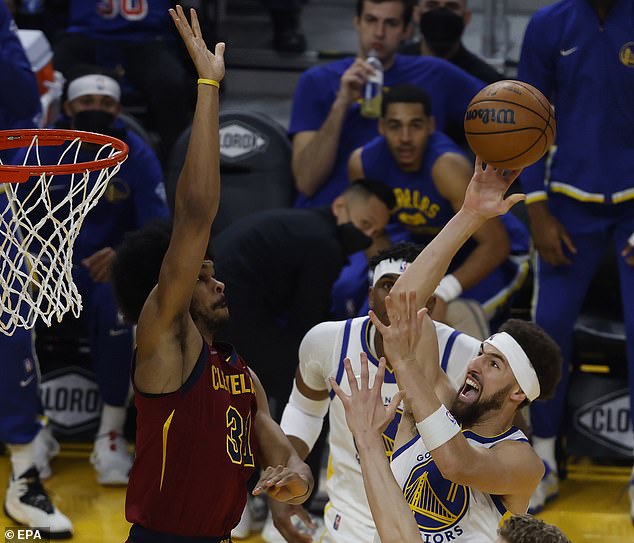 Lamar Stevens had 17 points and four rebounds for Cleveland.

Thompson missed 941 days and hadn’t played since tearing the ACL in his left knee in Game 6 of the 2019 NBA Finals against Toronto. While rehabbing from surgery for that injury, he tore his right Achilles tendon scrimmaging on his own in November 2020.

The five-time All-Star finally made his much-anticipated return, and reached two career milestones – 12,000 points and 1,800 3-pointers.

‘It was just amazing having him out there,’ Curry said on the television broadcast.

Thompson got off to a slow start but showed plenty of the flash that made him a vital component on Golden State’s three championship teams from 2015-18.

At one point Thompson brought the crowd to its feet when he drove around a defender near the 3-point line and scored on a jarring one-handed dunk. Thompson snarled and pounded his chest as he walked back toward midcourt. Moments later he made his first 3-pointer to go over 12,000 points and put the Warriors up 49-41.

After spending time on a stationary bicycle, Thompson started the third quarter and made three consecutive shots, including his 1,800th.

I hate Jarocho | The Economist

NBA: LeBron James can’t be alone if the Lakers want to aspire to something

Cade Cunningham suffered a hazing in the form of expulsion during the game that his team, the Pistons, lost to the Suns 108-135. The number 1 in the...

Comfortable victory for the Phoenix Suns at the home of the Detroit Pistons. The team led by Monty Williams showed their superiority from start to finish and ended...

The Cleveland Cavaliers added their fourth consecutive victory in the Oklahoma City Thunder pavilion (107-102). The team led by JB Bickerstaff continues to collect accolades wherever they go....

Embiid after equaling a Harden record: “I just want to win”

Philadelphia 76ers star Joel Embiid continues to set records while his team is in the prime of the season. In the Miami Heat's home win (109-98), Embiid recorded...

NBA: LeBron James can't be alone if the Lakers want to aspire to something

McDonald’s employee reveals how the grills are cleaned