NBA: Luka Doncic suffers a worrying calf injury on the eve of the play-offs


Luka Doncic strained his left calf in Dallas’ 130-120 victory over San Antonio in what turned out to be a meaningless regular-season finale Sunday night, putting the superstar’s status in question for the play-off-bound Mavericks.

Doncic wouldn’t have even been eligible for the game had the NBA not rescinded his 16th technical foul of the season two nights earlier against Portland. Without the NBA’s decision, Doncic would have served a one-game suspension.

The two-time All-Star had turned to run to the defensive end late in the third quarter when he pulled up after the first step and stopped. 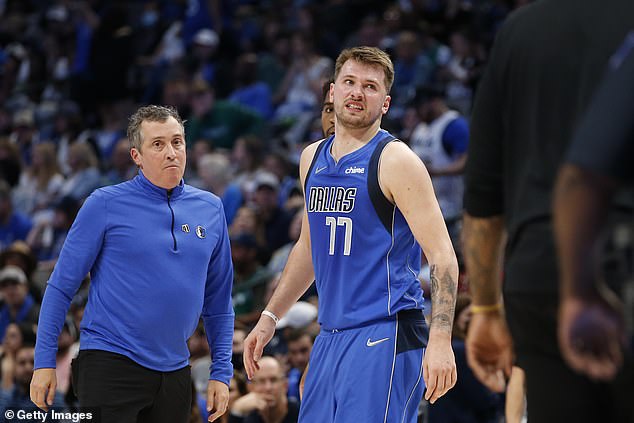 Doncic, who led Dallas with 26 points, nine assists and eight rebounds, called for the medical staff while reaching for his calf after play was stopped and almost immediately went to the locker room. Coach Jason Kidd said after the game he didn’t have any update on the injury, but Doncic’s status could be in doubt with fourth-seeded Dallas set to open the play-offs next weekend against Utah.

The Mavericks had a chance to move up the third seed, but needed New Orleans to beat Golden State when the Pelicans were resting several regulars. The Warriors won 128-107.

The Spurs were already locked into the final spot in the play-in tournament as the 10th seed in the Western Conference. Keldon Johnson scored 24 points for San Antonio, which will play ninth-seeded New Orleans on Wednesday. The winner plays the loser between No 7 seed Minnesota and the eighth-seeded Los Angeles Clippers for the No 8 seed. 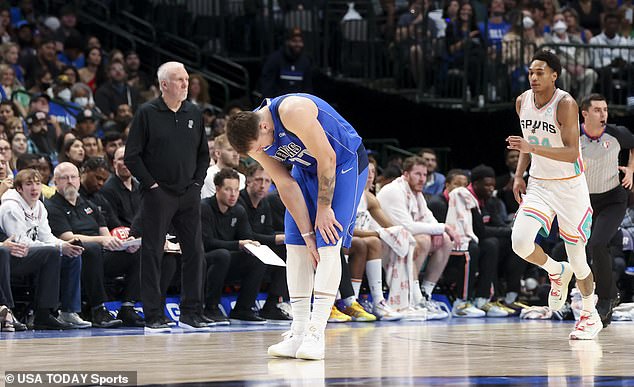 Jordan Poole scored 22 for the Warriors, who opened up a 22-point lead in the second quarter and held on to close out the regular season on a five-game winning streak.

The Pelicans were already locked into the ninth spot in the Western Conference and limited playing time for the usual starters ahead of their single-elimination play-in game on Wednesday against San Antonio. Brandon Ingram (right hamstring), Herbert Jones (bruised right tibia) and Jonas Valanciunas (sore right ankle) sat out, as well as top scoring reserve Devonte’ Graham.

The Nets will host No 8 Cleveland on Tuesday in the play-in tournament, with the winner moving into the play-offs as the No 7 seed. The loser will have a second chance by hosting the winner of the game between the No’s 9 and 10 seeds on Friday.

Brooklyn and Cleveland both finished 44-38, but the Nets won the season series to take the tie-breaker.

Oshae Brissett had 28 points for Indiana. The Pacers lost their final 10 games to finish 25-57. 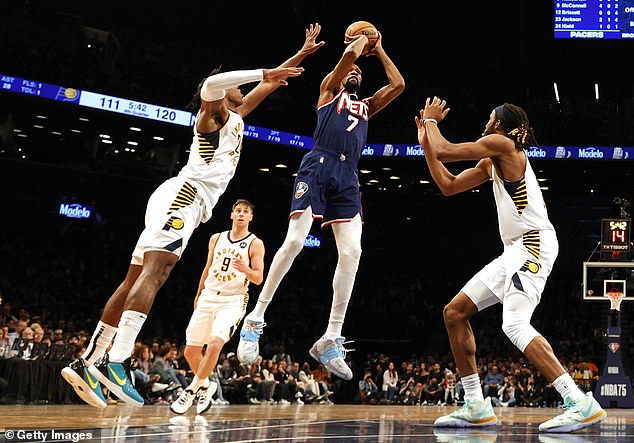 Kevin Love made eight three-pointers and scored 32 points and Cleveland beat Milwaukee to take the No 8 play-in spot – and a match-up against Brooklyn.

Love did all his damage in 15 minutes, matching his career high for threes and adding 10 rebounds. Rookie Evan Mobley added 18 points and 10 rebounds.

The defending champion Bucks rested superstar Giannis Antetokounmpo and their other regulars for the regular-season finale. Milwaukee rookie Sandro Mamukelashvili had a season-high 28 points and added 13 rebounds.

Joel Embiid sat out after he clinched the scoring title and James Harden joined him on the bench, leaving Shake Milton and Tyrese Maxey to lead Philadelphia past Detroit.

The 76ers finished with the No 4 seed in the Eastern Conference play-offs and will open against Toronto. Milton scored 30 points, and Maxey and Paul Reed had 25.

Allen Iverson was in the house and the last Sixer to win a scoring title – four, actually- got to share the arena with this season’s champ. Embiid finished at 30.6 points per game. Milwaukee’s Giannis Antetokounmpo also rested Sunday, finishing at 29.9 points.

Luka Garza led the Pistons with 20 points and 10 rebounds.

At 64-18, Phoenix finished with the best mark in franchise history and had eight more victories than other team in the NBA. Sacramento was 30-52 for it’s 16th-straight losing season.

The Suns rested most of their top players in preparation for the play-offs, including Chris Paul, Devin Booker, Deandre Ayton and Jae Crowder. Coach Monty Williams said his major goal against the Kings was helping some of the back-ups gain confidence heading into the post-season.

Mikal Bridges started but played just six minutes. He extended his games streak to 309 games, which is every possible regular-season game since he came into the league four seasons ago. It is the longest active streak in the NBA.

Malik Monk had a career-best 41 points and Austin Reaves set career highs with 31 points, 16 rebounds and 10 assists to help Los Angeles outlast Denver in overtime in a season finale devoid of star power.

The Lakers were eliminated from the play-in tournament Tuesday and the Nuggets wrapped up a playoff spot Thursday. Denver is No. 6 in the West and will play Golden State in the first round.

The Lakers sat LeBron James (ankle), Anthony Davis (right foot), Carmelo Anthony (non-Covid illness), Russell Westbrook (right shoulder) and Dwight Howard. Coach Frank Vogel said James did not make the trip because he was scheduled to have an MRI on his right ankle.

Markus Howard had a career-high 25 points for the Nuggets.

Trae Young had 28 points and 11 assists and Atlanta wrapped up the regular season with a victory over Houston that didn’t improve its post-season position.

The Hawks finished ninth in the Eastern Conference and will host 10th-seeded Charlotte on Wednesday night in the play-in tournament.

Jalen Green, the second overall pick in the draft, had a season-high 41 points for the Rocket. The lost their seventh straight game to finish 20-62, giving them the NBA’s worst record for a second-straight season. 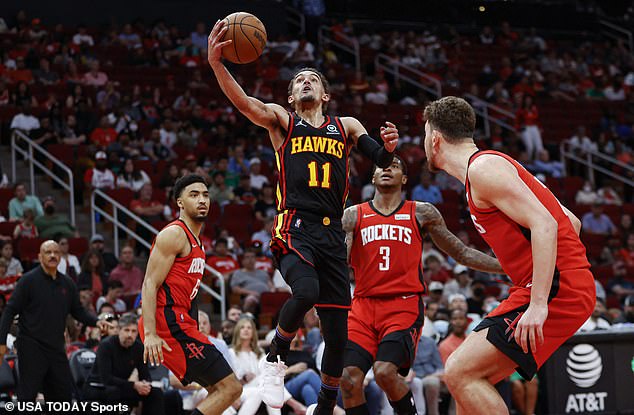 Al Horford added 13 points as the Celtics shot close to 55 per cent against the short-handed Grizzlies.

The Hornets finished 43-39 – 10 more wins than a year ago in an abbreviated 72-game season – and will be the 10th seed in the East for the second straight year.

Rui Hachimura had 21 points for Washington.

Victor Oladipo had 40 points, 10 rebounds and seven assists for the Heat. They wrapped up the top seed in the Eastern Conference on Thursday night and rested several players.

Oladipo, playing in only his eighth game of the season after recovering from surgery on his right quad 11 months ago, scored 25 points in the first half.

Patrick Williams scored a career-high 35 points and Ayo Dosunmu had 26 points in a season-high 45 minutes and Chicago beat Minnesota with both teams resting regulars before the postseason.

Troy Brown Jr. added 17 points and 11 rebounds for the Bulls, who played without four starters and stopped a four-game losing streak. The Bulls already had the No 6 seed in the Eastern Conference bracket secured. They’ll face No 3 seed Milwaukee in the first round.

Nathan Knight had 17 points and eight rebounds for Minnesota. Locked into seventh place in the Western Conference earlier in the week, the Timberwolves will host the Los Angeles Clippers in a play-in game Tuesday night.

The Knicks finished 37-45 after making the playoffs last season, but second-year players Toppin and Quickley ended on high notes. Quickley had career highs in points and assists and equaled his best night on the boards.

Toronto held out Pascal Siakam and Fred VanVleet in their final game of the regular season ahead of their first-round play-off match-up with fourth-seeded Philadelphia. Chris Boucher scored 21 points for the Raptors.

Amir Coffey had career highs of 32 points and 13 rebounds and Los Angeles routed depleted Oklahoma City to end the regular season on a five-game winning streak.

The Clippers finished 42-40, a major accomplishment after playing the entire season without injured superstar Kawhi Leonard – and with Paul George only returning recently after missing 43 games with an elbow injury. The Clippers are at Minnesota on Tuesday in the play-in tournament.

Juancho Hernangomez had a season-high 22 points and Utah beat Portland to take the fifth seed in the Western Conference.

The Jazz will face fourth-seeded Dallas in the opening round of the playoffs. Rudy Gobert added 18 points and 13 rebounds for the Jazz, while top scorer Donovan Mitchell sat out of the game with a non-Covid-19 illness.

Reggie Perry, who signed a 10-day deal with Portland on March 30 that was extended through Sunday, had a career-high 20 points.

Former owner of Mt.Gox believes that security breaches in cryptocurrencies persist By EFE

Former owner of Mt.Gox believes that security breaches in cryptocurrencies persist By EFE