Nearly 20,000 homes in the UK were without power for a fourth night yesterday as engineers battle to repair the damage done to electricity lines by Storm Arwen.

Energy provider SSEN remains at red-alert status for its north of Scotland network as its teams respond to widespread and extensive damage to its network caused by stormy weather.

The north-east of Scotland remains the worst affected, with police declaring a major incident in the region. Areas of Moray, Angus, Perthshire, Dumfries and Galloway and the Borders have also been impact by Storm Arwen.

SSEN said the storm had caused ‘catastrophic damage’, three times greater than that caused by the Beast from the East in 2018. Deputy First Minister John Swinney said the complexity of the recovery ‘cannot be underestimated’.

The Energy Networks Association said the number of homes across the UK powerless as of 5pm yesterday was 66,000, although around a million homes and businesses are believed to have been damaged overall.

This comes as parts of the UK faced the coldest night of the autumn so far, including Shap in Cumbria, north-west England, which the Met Office said recorded the lowest temperature of the season so far at minus 8.7C (16.34F).

The Met Office said cold temperatures will be replaced by a warming trend on Monday, followed by another dip in temperatures on Wednesday night.

Spokesman Oli Claydon said: ‘The whole of the UK will turn milder. The places that will hold on to the cold air the longest will be in the south-east of the UK. The low temperatures will return on Wednesday and Thursday night.

The Prime Minister pledged to help Scotland cope with the aftermath of the storm, which saw swathes of the UK hit by strong winds, sleet and snow over the weekend, while former Lib Dem leader Tim Farron called for the Government to bring in the Army to assist. 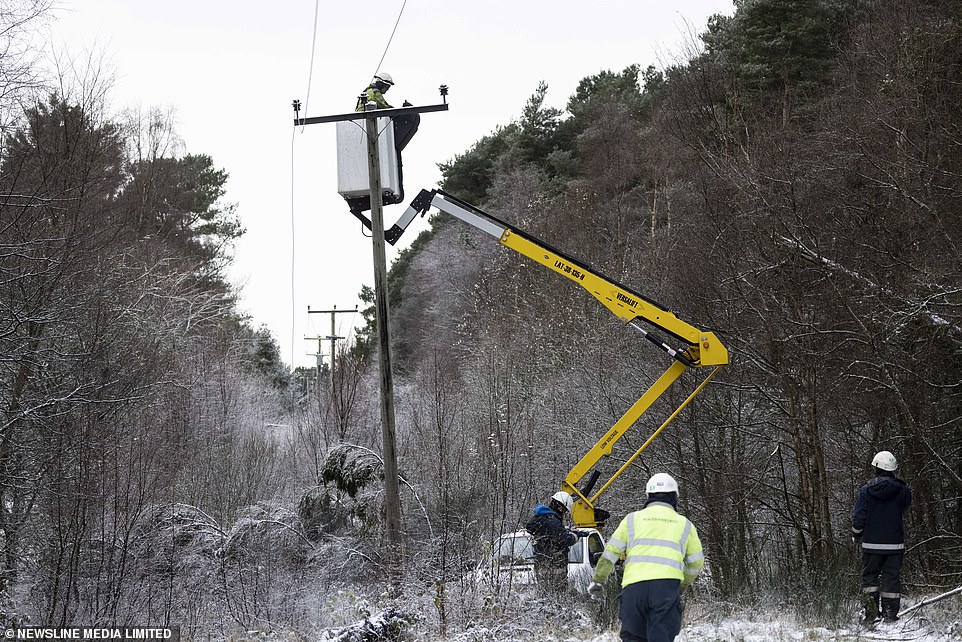 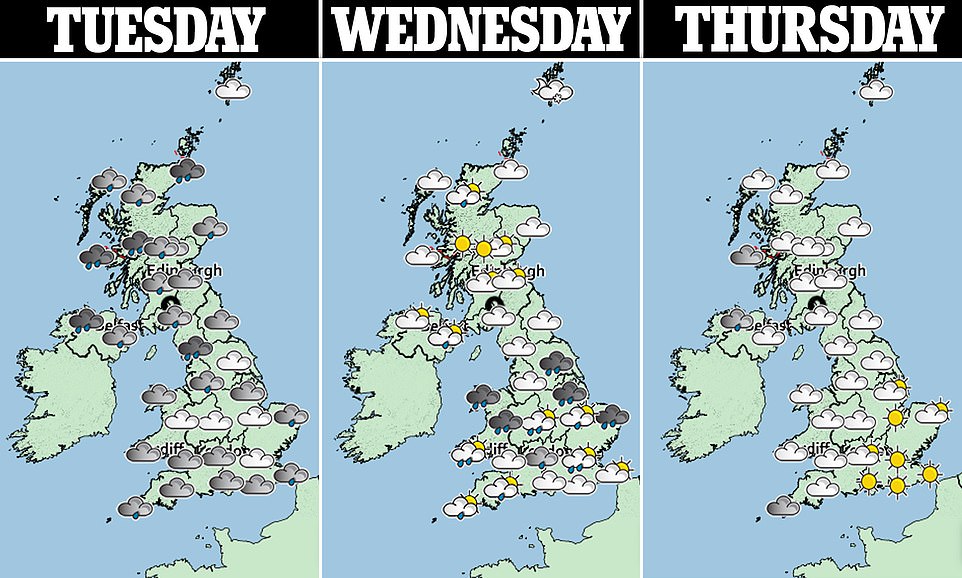 The Met Office said cold temperatures will be replaced by a warming trend on Monday, followed by another dip in temperatures on Wednesday night

All but two of the 61 people who became trapped at a pub cut off by snow have been able to safely make their way home.

The group became trapped in the Tan Hill Inn in the Yorkshire Dales on Friday as a result of heavy snowfall during Storm Arwen.

The pub’s general manager, Nicola Townsend, 51, told the PA news agency: ‘The snow plough managed to get up about 11 o’clock this morning and cleared and gritted.’

The two people remaining at the pub had hired a camper van and plan to leave on Tuesday.

‘They took a little walk out and because they’ve not really had a camper van before they were a bit nervous’, Ms Townsend explained.

Oasis tribute band Noasis continued to provide musical entertainment after their gig on Friday at the pub, which at 1,732 feet (528m) above sea level is the highest in the UK.

People slept on makeshift beds and mattresses on the floor during the three nights, and were treated to films on a projector screen, a quiz night and karaoke.

The ENA said drone and helicopter surveys have revealed problems in hard-to-reach areas, with one patrol finding almost 100 electrical poles snapped and needing to be replaced.

An ENA spokesperson said: ‘Supporting and reconnecting customers is our absolute priority and our customer teams are working around the clock to contact customers and keep them informed.

‘We are also working with other utilities, local authorities, emergency services and the British Red Cross to support this effort.’

Boris Johnson said the UK Government was standing by to help Scotland. In a tweet, he said: ‘My thoughts are with those continuing to face any disruption caused by Storm Arwen. The situation in the north east of Scotland is among the most concerning and while forecasts are improving, we are on stand-by to provide further assistance to the Scottish Government.’

In the Commons, Mr Farron said ‘These people are facing their fourth night without electricity. We need support tonight to help the hard work of the engineers working around the clock to fix those connections, to increase their numbers. That may well mean bringing in the Army.’

He added: ‘We also need support for the amazing community volunteers helping vulnerable people and families who are cold, hungry and suffering in other ways. After four nights without power, most people become vulnerable.’

In Wales, rail services will be affected this week as trains that ran over debris-littered tracks are repaired, Transport for Wales said.

The London Ambulance Service and charity Age UK have urged people to look out for elderly relatives who are most likely to suffer adverse health effects in cold weather.

Age UK advised people to keep moving and ensure they get their winter vaccines, while LAS urged people to check on their grandparents. 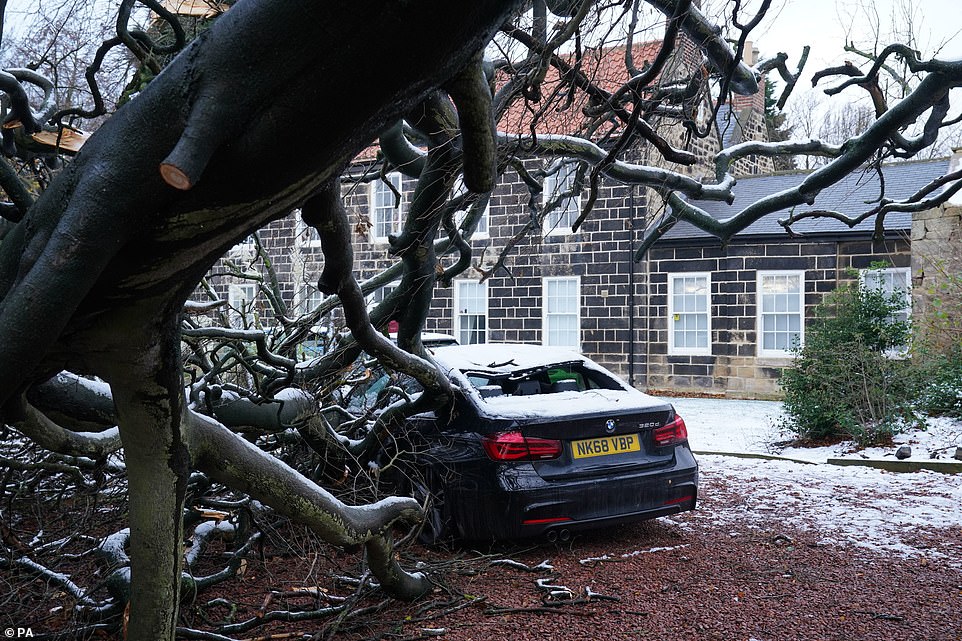 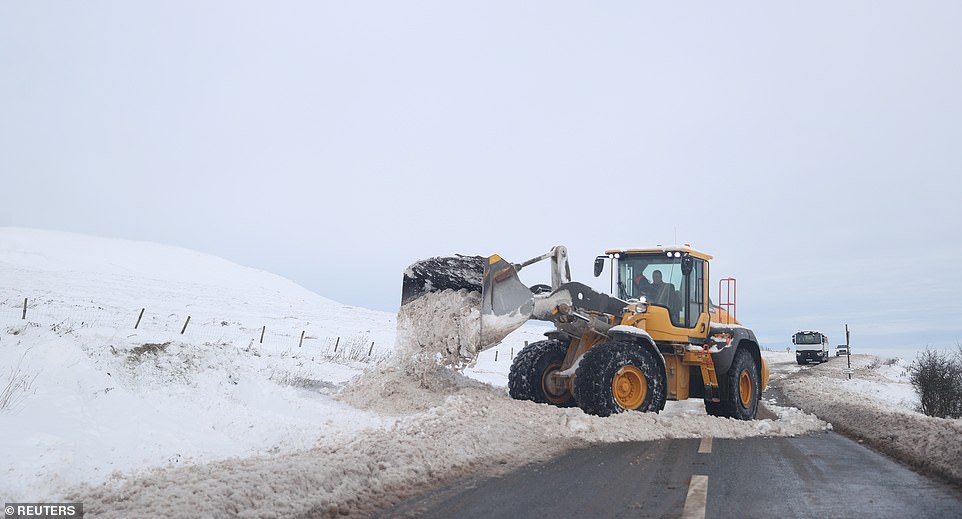 The repair bill from Storm Arwen could cost insurers more than £250 million, according to an expert.

Swathes of the UK have been hit by strong winds, sleet and snow.

Mohammad Khan, general insurance leader at PwC UK, said on Monday: ‘Insurance companies have been fielding a high volume of calls over the weekend and today on Storm Arwen.

‘Most of the calls have been in relation to home and car damage – predominantly home, however, as is usual with a major storm; the claims from businesses take longer to be reported and to assess.

‘Based on the breadth of Storm Arwen and the damage seen so far, we estimate the insurance losses could be between £250 million to £300 million.

LAS said in a statement: ‘Please look out for family, friends and neighbours who may be vulnerable in colder weather.

‘Just popping in for a cup of tea and making sure they are stocked with groceries and their heating is working could make a huge difference.’

An SSEN spokesperson said: ‘Since the start of Storm Arwen at around lunchtime on Friday, power has been restored to over 103,000 customers in total, with 17,000 customers currently off supply.

Mark Rough, director of customer operations at SSEN, said: ‘We continue to make good progress following the extensive network damage caused by Storm Arwen, with additional teams assisting with restoration efforts and major connections made to locations such as Ballater and Braemar.

‘Our engineers are still experiencing challenging conditions and multiple faults on individual circuits, with complex repairs under way that will take longer than normal.

‘The extent of the damage is also hampering the ability to re-route the network to restore supply.

‘We recognise that another day without power brings additional concern to those affected, and I’d like to apologise to all customers for the ongoing disruption and assure them that we are doing all we can to restore power.

‘We continue to prioritise support for vulnerable customers, through co-ordination with our resilience partners, and are also offering to reimburse reasonable costs for accommodation, where customers do not have any alternative option.’

As part of this, support is being prioritised for the most vulnerable Priority Services Register customers.

Masks rule returns… but not everyone is on board