The third wave of the coronavirus pandemic has left nearly 50,000 Americans hospitalized with experts fearing several hospitals will soon be put under severe strain.

According to The COVID Tracking Project, hospitalizations rose in 47 states over the last month with a total of 47,502 people hospitalized as of Sunday – the highest level seen since the summer.

In Wisconsin, a record of more than 1,200 patients are hospitalized and nearly 90 percent of intensive care unit (ICU) beds are in use, the state’s hospital association says.

The state’s Department of Health says this is the tenth consecutive day that New Mexico has set a record for COVID-19 hospitalizations.

It comes as the US recorded more than 81,000 infections on Sunday, with the country’s total case count of 9.2 million rising by more than one million in the last two weeks.

The seven-day rolling average number of new daily cases hit 81,431 – a level not seen since early September – according to a DailyMail.com analysis of data from Johns Hopkins University.

Meanwhile, daily deaths have fallen to lows not seen in two weeks with just 447 reported yesterday.

About 819 people are dying per day, the highest figure seen in more than one month, according to the DailyMail.com analysis.

It comes at the US prepares to head into Election Day on Tuesday with President Donald Trump saying the country is rounding the corner and Democratic rival Joe Biden says the president’s response to the pandemic has been ‘almost criminal.’ 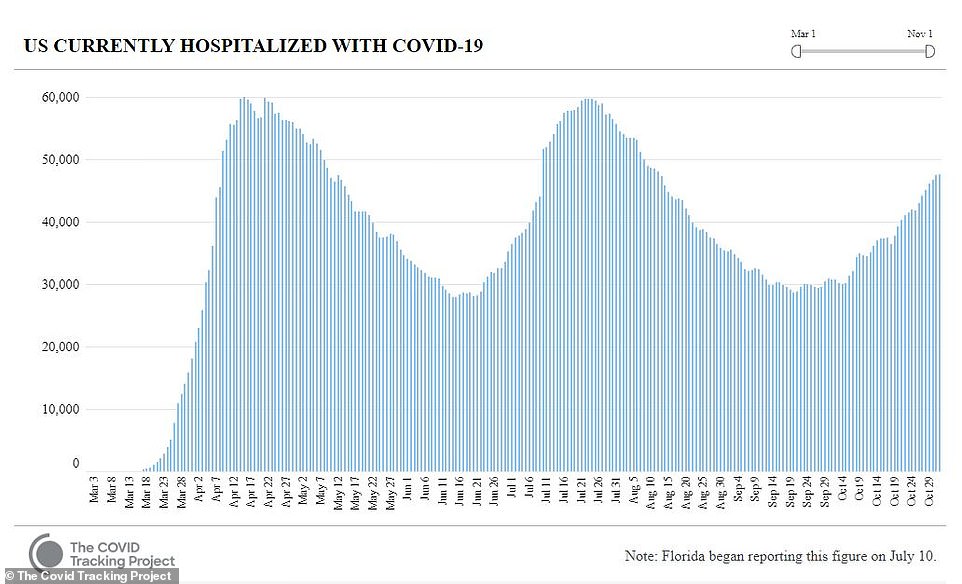 Coronavirus hospitalizations rose in 47 US states over the last month and there are currently a total of 47,502 people hospitalized as of Sunday. 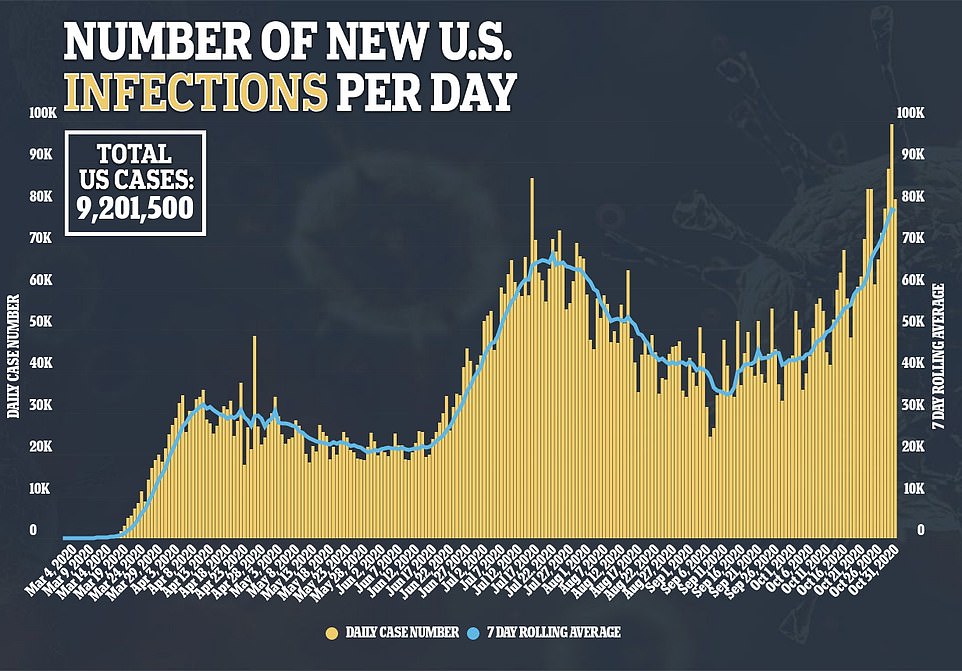 The US recorded more than 81,000 infections on Sunday and the seven-day rolling average number of new daily cases also hit 81,431 – a level not seen since early September – 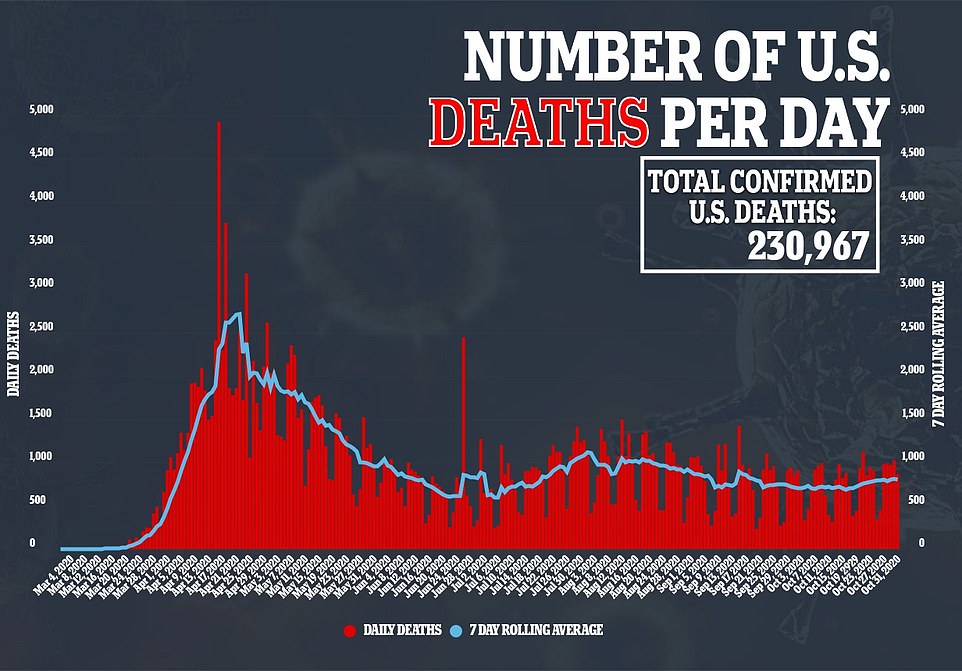 Although just 447 deaths were recorded yesterday, an average of 819 people are dying per day, the highest figure seen in more than one month,

Cases have been surging across the country, with the Midwest, Great Plains and Southwest seeming to shatter new records every day.

In Illinois, 6,980 new cases of coronavirus were reported on Sunday, finally breaking a streak of three straight recording-breaking days.

As of Saturday night, 3,294 Illinoisans are hospitalized with COVID-19. This is the highest level seen since May 30.

Of those, 692 patients are in the ICU and 284 are on ventilators

‘I know that the vast majority of people in this state want to keep themselves safe, keep their families safe, keep their children safe, their neighbors and friends,’ Gov. J.B. Pritzker said in a news conference over the weekend.

‘But unfortunately, as these trends indicate, things are moving in a bad direction all across our state.’

‘Every day now we see these numbers going through the roof, and so the idea that we’re going to make the locations that are amplifying the number of cases and the spread, the transmission of this virus, that we’re going to open those even more at this point makes no sense to me,’ the governor said.

As of Saturday night, 3,294 Illinoisans are hospitalized with COVID-19, which is the highest level seen since May 30, as about 7,000 cases are recorded every day

The Wisconsin Hospital Associations reported that an average of nearly 1,300 people are hospitalized with the virus, taking up 84 percent of hospital beds

There are more than 1,700 people hospitalized due to COVID-19, which is the highest figure seen since early May

Yale University has reported 43 new cases of the novel coronavirus in the last week.

According to the university’s COVID-19 dashboard, that is 35 percent of all cases reported since August 1.

Of the new cases, 22 are among students and 21 are among faculty or staff.

‘We have indeed seen an uptick in cases recently, as has our local region and the state,’ chair of the Yale COVID Testing and Tracing Committee Madeline Wilson wrote in an email to the school’s paper.

‘While we are still in the process of performing the contact tracing for these Wednesday cases, so far they do not represent a cluster or clusters, but are instead largely the result of community spread in the setting of social events or gatherings taking place off campus.’

In the battleground state of Wisconsin, new cases are at an average of about 4,300 per day, which is down four percent from last week, according to Johns Hopkins University.

News 3 Now reports that the state’s seven-day average of positive coronavirus tests is nearly at 30 percent, which is an all-time high.

The Wisconsin Hospital Associations reported that an average of nearly 1,300 people are hospitalized with the virus, taking up 84 percent of hospital beds.

Meanwhile, 317 patients are in the ICU, making up just under 25 percent of all coronavirus hospitalizations.

Currently, the Centers for Disease Control and Prevention ranks Wisconsin as having the third-highest number of cases per 100,000 people over the past seven days, behind North Dakota and South Dakota.

This led to Gov. Tony Evers (D) to extend an indoor mask mandate through November 21 and limit indoor public gatherings to 25 percent capacity – the latter of which is on hold due to a Wisconsin appeals court.

In nearby Michigan, another swing state, 3,792 new cases were reported on Saturday, the state’s highest single-day total.

Daily infections have increased more than 50 percent since last week.

There are more than 1,700 people hospitalized due to COVID-19, which is far from the peak – but is the highest figure seen since early May.

In New Mexico, hospitalizations reached a record high of 365.

According to the state’s Department of Health, compare to the early days of the pandemic, more young people are being admitted to the hospital compared with older residents

In New Mexico, coronavirus hospitalizations have reached a record high of 365 with more young people people hospitalized according to state officials

Another record was also recently broken when deaths in the state recently topped 1,000 on Friday. Gov. Michelle Lujan Grisham (D) ordered flags to fly at half-staff starting Monday for a week of mourning.

Among the Great Plains, North Dakota and South Dakota are experiencing two of the country’s worst outbreaks

The state’s seven-day rolling average of new daily cases has increased by more than 42 percent in the last two weeks, according to data from Johns Hopkins University.

COVID-19 hospitalizations in North Dakota rose to 200 on Sunday, which is the fifth consecutive day of an increase, the health department There are are only 19 available ICU beds and 209 regular, inpatient beds across the entire state, according to the latest figures.

Michael Le Beau, the president of Sanford Health – which has just one ICU bed and five regular beds available, told The Associated Press that there needs to be high compliance regarding mask wearing and social distancing.

‘I do have a concern that the rate of growth is not sustainable,’ he said.

Where the College Football Playoff stands after Week 9

10 horror movies that will get your heart racing