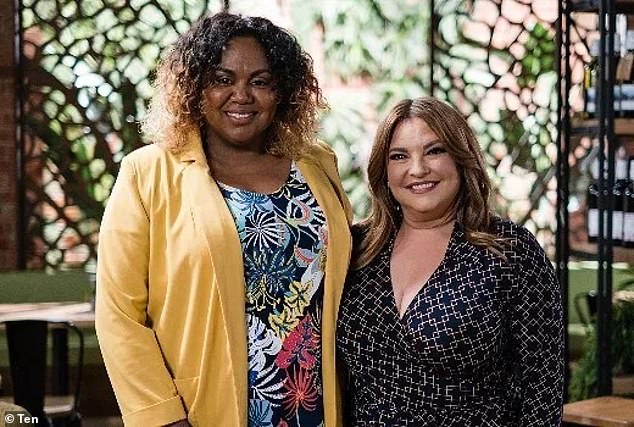 Neighbours will tackle the ‘change the date’ debate in an upcoming episode.

The Australian soap will make the controversial debate about Australia Day a central storyline in episodes beginning on January 26.

According to TV Tonight, the storyline will focus on Rebekah Elmaloglou’s character Terese Willis.

Topical: Neighbours will tackle the ‘change the date’ debate in an upcoming episode

‘Terese has withdrawn Lassiters from celebrating Australia Day, but problems arise when a former statement she made was less supportive of change. Terese finds herself accused of being a hypocrite,’ reports TV Tonight.

‘Terese is disappointed by her past statements,’ Elmaloglou told TV Week magazine.

‘She no longer stands by her comments, but knows she has to take responsibility for the things she’s said. After speaking to Jacinta (Maurial Spearim), she knows that apologising is very important.’

Confronting: According to TV Tonight, the storyline will focus on Rebekah Elmaloglou’s character Terese Willis

A recent study found that just 11 per cent of Australians want to change the date of Australia Day and a huge majority think the country has become too PC.

A poll by the Institute of Public Affairs found 71 per cent of Australians support celebrating the national day on January 26, while 68 per cent say political correctness has gone too far.

More than 1,000 Australians were surveyed, with 70 per cent believing there should be less political disagreement about Australia Day, and 83 per cent saying it should be a day to respect the contribution that everyone has made to the county.

A new poll has found that 71 per cent of Australians support celebrating Australia Day on January 26. Pictured: girls pose with an Australian flag on the water

In recent years, the weeks before Australia Day have been fraught with debate about whether its is wrong to celebrate the day the First Fleet arrived to colonise Australia in 1788.

Some argue the date should be changed, while others think it should be scratched altogether.

The change the date debate isn’t the only exciting thing happening in the world of Neighbours right now.

Invasion Day protesters march on January 26 in Melbourne in 2019

On Sunday, Margot Robbie’s little brother Cameron revealed he will follow in the footsteps of his 30-year-old actor sister by joining the cast of the show.

The 25-year-old has been cast as wealthy lifeguard Jesse Porter, who takes a summer job at Lassiters bar.

In an interview with Adelaide Now, Cameron said: ‘I’m so grateful to kick off 2021 with this role on Neighbours. My experience on set so far has been great and welcoming and I can’t wait to continue with my passions for the rest of the year.’

He’s arrived! On Sunday, Margot Robbie’s little brother Cameron revealed he will follow in the footsteps of his 30-year-old actor sister by joining the cast of the show