‘They have to ignore it… it’s hysteria’: Neil Lennon pledges to get Celtic back on track after consecutive big match defeats to Rangers and AC Milan

Neil Lennon has vowed to blank out the ‘hysteria’ surrounding Celtic‘s stuttering form.

A 3-1 defeat to AC Milan in the Europa League followed a crushing home loss to Rangers and marked the club’s first back to back defeats since December 2018.

A late header from Mohammed Elyounoussi raised hopes of snatching a point before Milan sub Jens Petter Hauge tied up the points in injury time. 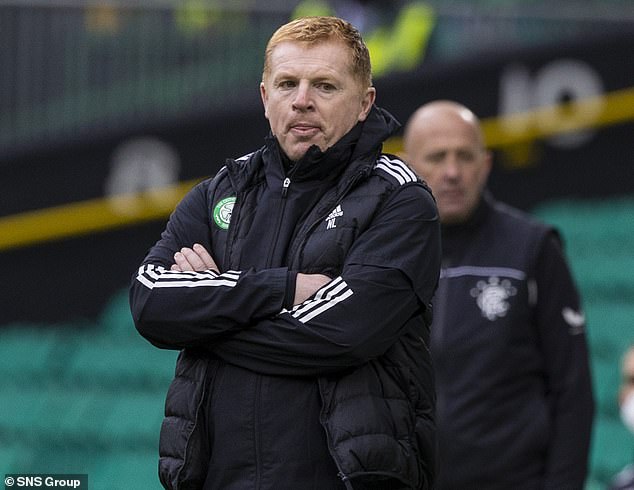 Under growing pressure from supporters ahead of Sunday’s trip to on-form Aberdeen, Lennon urged his players to blot out external noise after insisting they will come good.

‘They have to ignore it. That’s what it is, it’s hysteria. We have played two really good teams and lost both games but we know we will get better.

‘I’m disappointed we lost. I thought we deserved something out of the game against a very good side.

‘In the second half I thought we were lot better, more like ourselves. Our final ball let it down and that has to be better at this level.’ 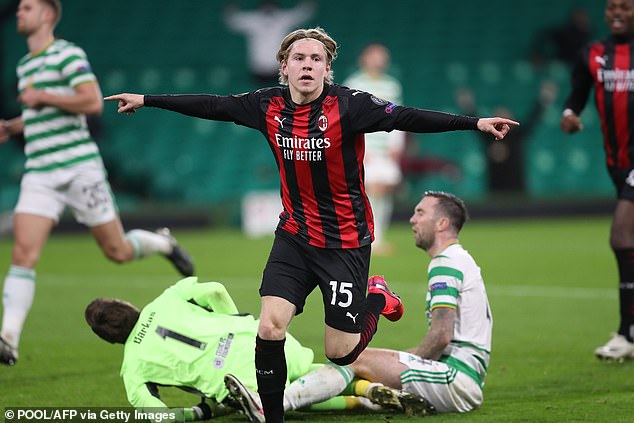 As Celtic pressed late on, Jens Petter Hauge capitalised by breaking through to slot home

New loan signing Shane Duffy missed a key header for the opener and the Parkhead boss admitted: ‘The two goals are definitely avoidable, especially the first one. It was the first real attack Milan had in the game. We need to be far tighter and more secure than that. But our reaction was very good in the second half.’

Refusing to single out goalkeeper Vasilis Barkas for criticism after the £5million signing was underwhelming once again the Parkhead manager said: ‘Goalkeeper is a specialist position. I’m not criticising him I think he can improve and will improve as he goes along. I think it’s unfair to criticise one player after a difficult couple of games. I’m not going to do that.’

Defending the decision to start with the formation which failed to halt Rangers, Lennon countered: ‘I couldn’t start with a back four. I couldn’t start Ryan (Christie) based on what the medical team told me. We had no wingers at the weekend apart from Elounoussi.

‘We have started the season 4-3-3 and were alright in some of the games we scored more goals with 3-5-2 but it’s about personnel and getting players back fitter and hungrier that was a big plus tonight.

‘Laxalt in his second game I thought was brilliant. There were really good signs tonight that they are getting up to speed. They coped in the end very, very well. 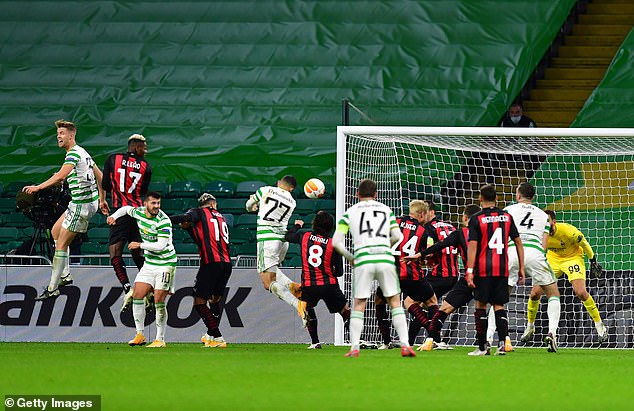 ‘I just felt our play was good it just lacked that cutting edge. When you are two down to a side as good as that you have to be really at it. I thought we were in the second half.’

‘It was the right thing to do at the right time,’ said Lennon of Brown’s removal. ‘He’s an amazing player and personality it’s not a slight on him.’

Lille thumped Sparta Prague in the other group game – with Celtic travelling to face the French league leaders on Thursday.

‘You could see there was a surge in quality and belief in the second half and that was missing on Saturday. 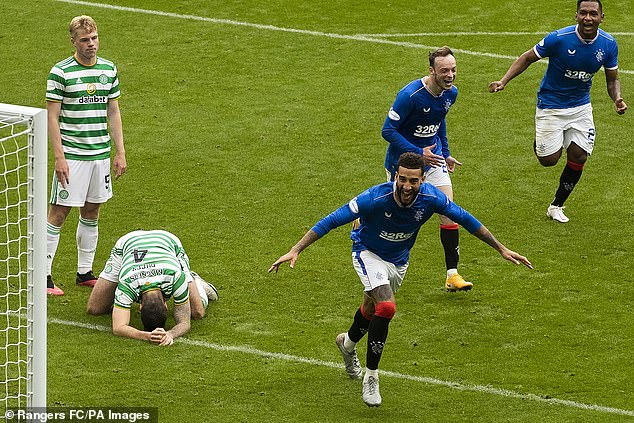 ‘People can be critical of the team on tonight’s performance if they want, that’s fine, and they definitely deserved criticism at the weekend because we weren’t at our best. But there were a lot of signs for me that we will have another good season.

‘We could have shied away from it all after the criticism they and I have taken over the last couple of days but they showed real personality. I know what we’ve got in there and we will get better.’

Decimated by the loss of key players to Covid-19 Aberdeen will come too soon for star striker Odsonne Edouard.

‘Odsonne probably won’t make Saturday. We have to wait and see.

‘Has only done some cardio, a little bit of jogging to make sure he’s okay.

‘Nir Bitton is the same and Hatem Abd Elhamed isn’t back from Israel yet. It will be the same squad for Aberdeen.’