A neo-Nazi student accused of promoting extremist right-wing groups and using social media to ‘stir up a race war’ told a court he was researching the groups for his university dissertation.

He used online platforms to promote and raise money for SRN, which ‘preached zero-tolerance’ to non-whites, Jewish and Muslim communities and described homosexuality as a ‘disease’, jurors were previously told.

The defendant, who studied politics at Aberystwyth University, is accused of 15 charges, including 12 terrorism-related alleged offences.

He has denied being behind the accounts and claims he was ‘set up’, the Old Bailey has previously heard.

Today, Dymock claimed he joined online Alt Right groups on Discord as part of his research for his dissertation. 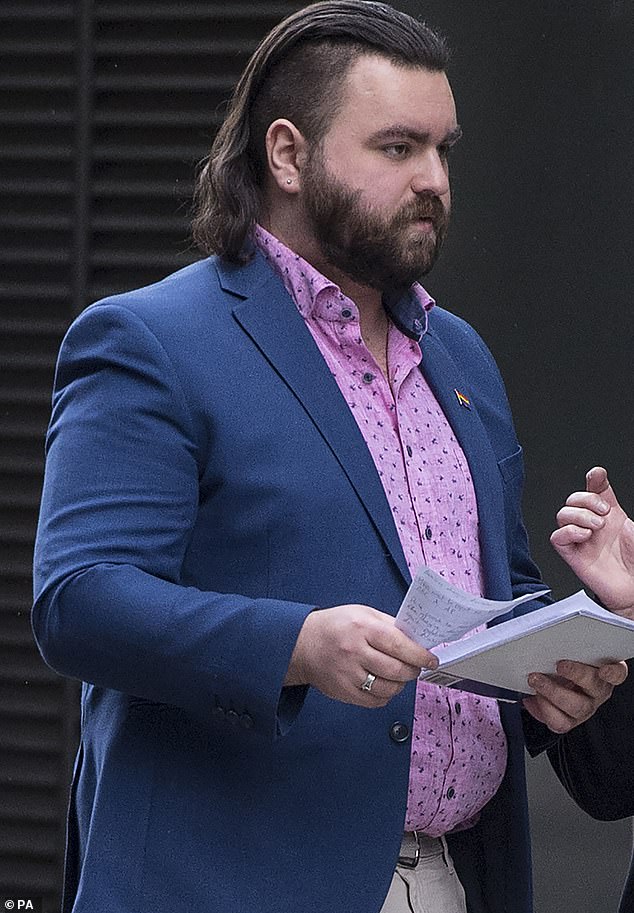 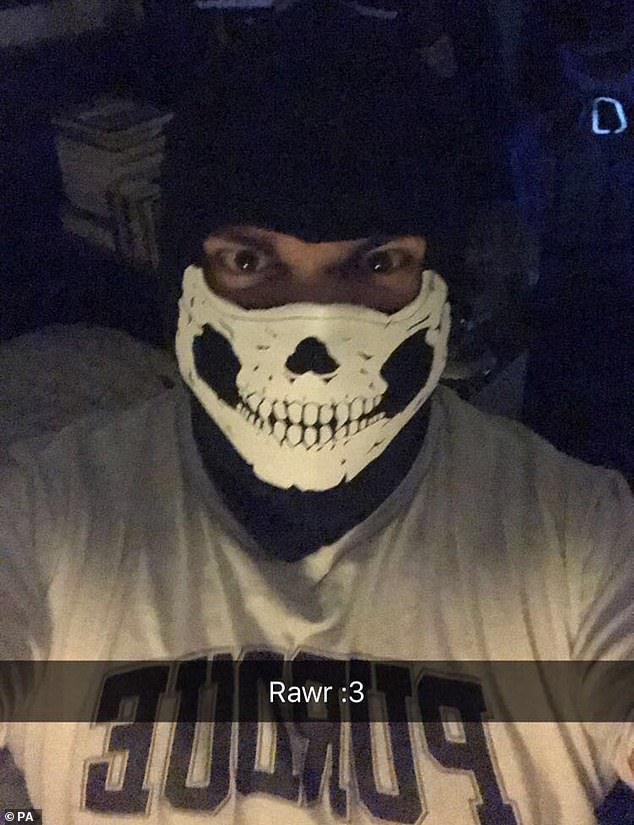 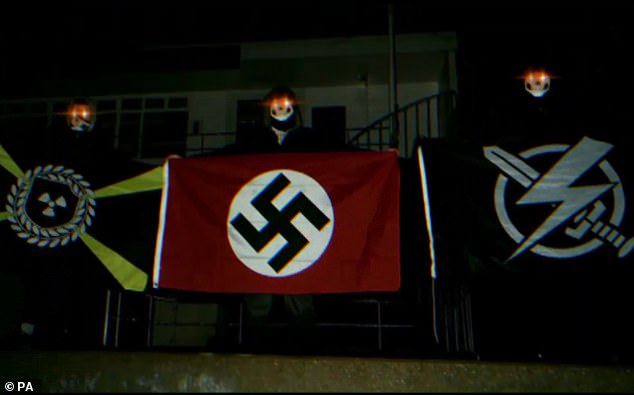 He said: ‘They are quite weird, some of them require you to post a picture of your hand to prove you are white to enter the server. They are extremely strange.

‘It is for my dissertation, I wanted to do something on the right wing due to my time in America, seeing the rise of right wing politics with Trump and then obviously the Alt Right and the far right.’

Dymock said he never ran the Neo-Nazi ‘The Lion Rises’ website, claiming that a purchase in his name from the WordPress platform was simply him buying some music editing software.

‘I never had anything to do with System Resistance Network activity.’

Dymock claimed he owned several copies of Hitler’s Mein Kampf because of a module he was taking in university as well as his dissertation research.

‘I bought a copy of Mein Kampf in 2017 accidentally, but it was in German. I can’t read German, and I bought these copies because they were in English.’

Dymock claimed he had books on topics ranging from Satanism and Neo Nazis and the fascist Christian movement Christian Identity because they were relevant to his research.

He also said the collection of flags including the SS flag, the Attomwaffen flag and the American confederate flag were just part of his research and interest in Vexillology (study of flags).

He went on to say that he took a picture of the Siege, the Koran and Mein Kampf on top of a Nazi flag so that he owed the image copy right to use in his dissertation

During the trial, a court also heard that an email exchange between Dymock and his mother where he called Hitler ‘the greatest feminist’ was just him ‘winding her up’.

‘There is a term used on the internet called ‘Feminazi’ in relation to feminists. There was a Mumsnet threat where it had been used.

The student told the court that as a teenager he had spent a lot of time online on forums such as Reddit and 4Chan, but claimed he mainly talked about music.

He described meeting a Swedish man on an online music forum and the two of them embarking in a two-year relationship which ended in 2017.

Asked about his political beliefs at the time, Dymock described himself as a ‘Libertarian verging on Anarchocapitalist’.

Andrew Morris, defending, asked him: ‘Is that a belief you still hold?’

Dymock replied: ‘Sort of, I stopped caring about politics for a long time, which is why this situation is ironic. 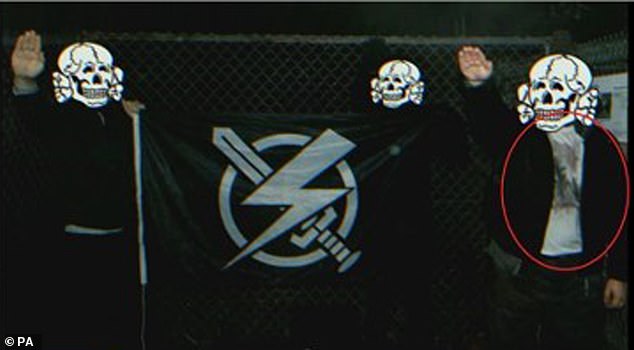 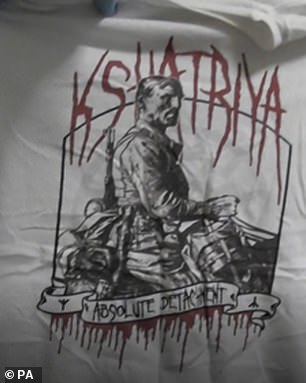 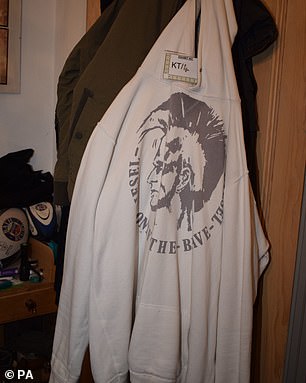 Pictured: T-shirts found in the bedroom of Dymock when anti-terrorism police raided his bedroom

Dymock said he was interested in strategy and military history, finding those topics ‘great fun’.

‘I was very much interested in the Warsaw Pact from the cold war, mythology, Greco-Roman and Pagan mythology,’ he said.

While he grew up in a non-religious household ‘leaning towards’ the Greek Orthodox church, Dymock said that he now identified as Pagan.

He also said he claimed he had never been involved in political activism of any kind.

In court today, jurors were told that Dymock frequented 4Chan, an anonymous board popular with some extremists, to discuss ‘TV shows, Game of Thrones and stuff like that’.

The Atomwaffen Division was founded in the US around 2013 with the aim of destroying civilisation in order to build a national socialist state.

Its UK offshoots were known as the Sonnenkrieg Division and System Resistance Network (SRN).

Jurors heard SRN was one of the organisations that filled the ‘dubious gap’ left after far-right group National Action was banned in 2016.

He admitted operating an Instagram account but claimed he had abandoned it in May 2018, before pictures of swastikas were posted on it.

Dymock said he took a year to study in Purdue University, Indiana, in 2016 because he was always interested in moving to the US and American politics.

He said he supported Republican Rand Paul during the 2016 Presidential election, but after he failed to get the nomination he simply watched the election for ‘entertainment’.

After returning to the UK, he took a university course focused on terrorism and violence in international politics, jurors were told.

Dymock told the court he was ‘tired of politics’ at that stage and was trying to find ‘the most free ideology’.

He claimed he wanted to study philosophy and theology, and to that end bought a Koran, a Bible and a Torah.

Dymock said he became fascinated with the Indo European polytheistic tradition and espoused its philosophy.

He claimed that the reason he had purchased a ring with the Black Sun was not because of the symbol’s popularity with Neo-Nazis but for religious reasons.

‘It has nothing to do with any form of Alt Right extremist ideology. It has been misused by them,’ he added.

Earlier this month, jurors heard that police had found flags, clothing, books and badges all of which had links to far-right groups at his home and university lodgings when they arrested him.

Jurors were also shown a stream of SRN tweets which included images that were later recovered from devices seized from Dymock’s bedroom.

On November 11 2017, a tweet featuring an image of a German SS soldier hailed those who fought for ‘Europe’s freedom against Jewish Bolshevism and Capitalism’.

It stated: ‘Their sacrifice shall not be in vain. Hail victory. #11November #RemembranceDay.’

On November 23 2017, the SRN account tweeted about the former military commander Ratko Mladic the day after he was convicted of war crimes, claiming he ‘did nothing wrong’.

Jocelyn Ledward, prosecuting, said: ‘The prosecution say he used the social media platforms to raise money for the group and to encouraged others to participate in terrorist activity and stir up hatred in their communities.

‘System Resistance Network, or SRN, was a group which preached zero-tolerance to non-whites, Jewish and Muslim communities. The group describes homosexuality as a disease. Its clarion call was for the expulsion of minorities and a white revolution.

‘Its online campaign comprising virulently racist, anti-Semitic and homophobic propaganda sought to stir up a race war against ethnic minorities and others that it perceived as race traitors. 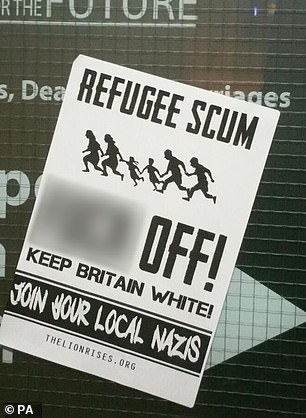 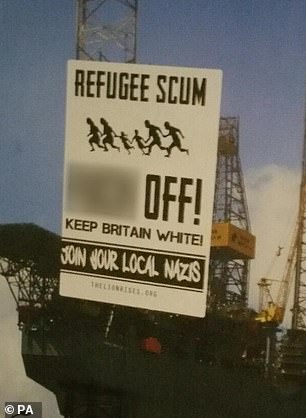 Pictured: Images posted on his account which allegedly matched images found in his bedroom

‘It was hostile to democracy, and sought to recruit and radicalise others using violent imagery and hate-filled language on social media and in local communities.’

Ms Ledward told jurors Dymock was not being prosecuted for holding racist, anti-Semitic or homophobic beliefs, or for his ‘adherence to a neo-Nazi creed’.

She said: ‘Rather, he is facing prosecution for his encouragement of terrorist activity, of violence, as a means to shape society in accordance with his beliefs, rather than through free speech and democracy.’

It came as jurors were shown a photograph allegedly showing Dymock performing the Nazi salute in a picture in front of a flag of banned extremist group System Resistance Network (SRN).

A court heard a T-shirt similar to the one worn by one of the figures in the photograph was found in Dymock’s bedroom during a raid by counter-terror police.

He further claims the material found at his address were for ‘academic’ and personal interest reasons rather than terrorism purposes.

NFL calendar hits key date; here's what it could mean for Aaron Rodgers and Julio Jones