Netflix has launched a linear service with a pre-programmed feed of TV shows, movies and other programming that is similar to an old-fashioned broadcast network.

Called Direct, the option is aimed at Netflix users who are ‘lacking inspiration,’ the company said.

Currently it’s only being offered in France, Netflix’s fifth largest market after the US, Brazil, the UK and Mexico.

Users can access Direct via the Netflix web browser, where a 24-hour real-time schedule programming is on view.

Because it airs live, there’s no rewinding or fast-forwarding. 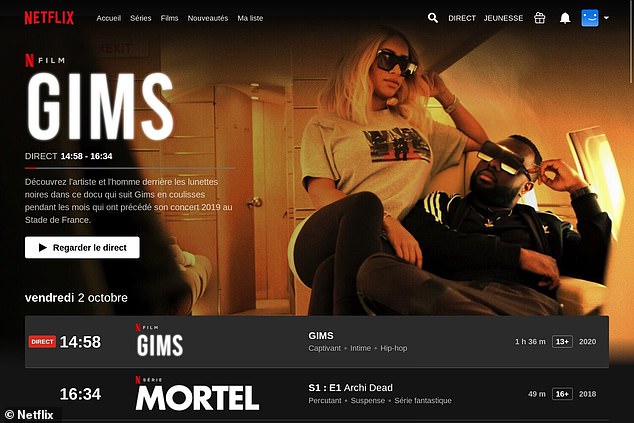 Available only in France, Netflix’s new Direct service operates like a traditional broadcast channel, with a pre-programmed schedule rather than on-demand offerings. Shows are viewed in real-time and cannot be rewound

‘In France, where traditional TV consumption is very popular, many viewers like the idea of ​​programming that avoids having to choose what to watch,’ Netflix product manager Emily Grewal said in a blog post.

‘Whether you are lacking inspiration, or you are discovering Netflix for the first time, you can let yourself be carried away without having to choose a particular title and let yourself be surprised by the diversity of the Netflix catalog.’ 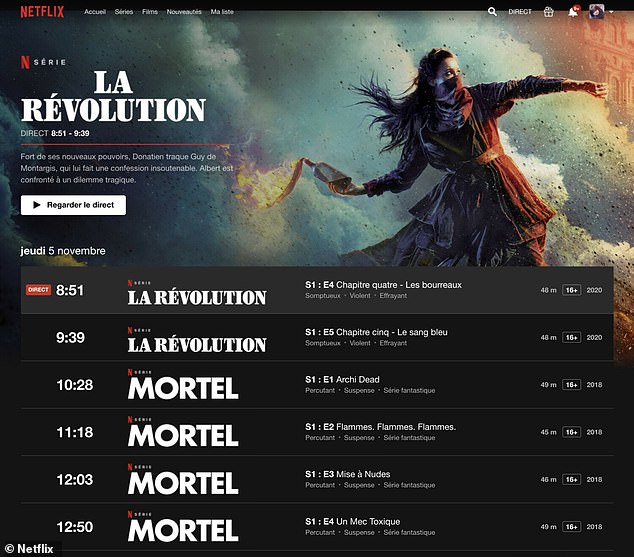 Users access Direct via the Netflix web browser, where a 24-hour grid of real-time programming is on view. The service is not currently available on the Netflix app or via streaming devices like Roku or Apple TV

Unlike standard Netflix, which adapts to each user’s tastes, Direct programming is based on what’s popular on the platform as a whole and regenerates automatically over a five-day period.

For now, the service is only available on the web version of Netflix, not on the app or via streaming devices.

The service was gradually deployed November 5, 2020 and will be available to all French Netflix users by the beginning of December, Grewal said.

There’s no word yet on whether Direct or a similar service will be made available in other markets.

As of January, Netflix had 6.9 million subscribers in France, according to chairman Reed Hastings. 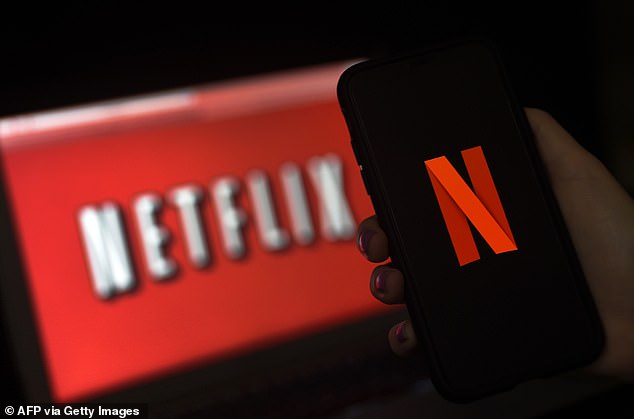 With nearly 7 million subscribers, France is Netflix’s fifth largest market. Starting next year, streaming services like Netflix and Amazon will have to invest a quarter of the revenue they make in France on local productions

Starting next year, streaming platforms like Netflix and Amazon will have to invest at least 25 percent of their locally generated profits into the creation of original French programming, according to a directive from the French culture ministry.

The move is intended to create a more level playing field for local broadcasters, who face more regulations and quotas.

‘It hasn’t always been easy between Netflix and France,’ French culture minister Franck Riester said in January. ‘At first, there were reservations, suspicions and mistakes on both sides… but in the end, we’ve both understood we can’t really live one without the other.’

Some 20 Netflix Original productions are underway in France, Screen Daily reports, including Jean-Pierre Jeunet’s artificial-intelligence comedy BigBug, an adaptation of the tales of turn-of-the-century gentleman burglar Arsène Lupin, and a series about the Paris stand-up scene by Call My Agent! creator Fanny Herrero.

Joaquin Niemann tests positive for COVID, WDs for the Masters