New Alzheimer’s treatment could decrease number of harmful proteins that smother brain neurons by up to 59%, study finds

A new Alzheimer’s treatment may be able to remove proteins associated with cognitive decline related to the age-related brain disease, a new study finds.

Researchers from the NYU Grossman School of Medicine found that elderly monkeys given a new drug saw a decrease of amyloid beta plaques and tau tangles by up to 59 percent.

The treatment ‘swallows’ the amyloid beta proteins that clog nerve cells and cause cognitive decline.

It comes as Alzheimer’s treatment is at the forefront of the medical world, with Biogen Inc’s aducanumab – the first medication in nearly two decades – was given approval by the U.S. Food and Drug Administration (FDA). 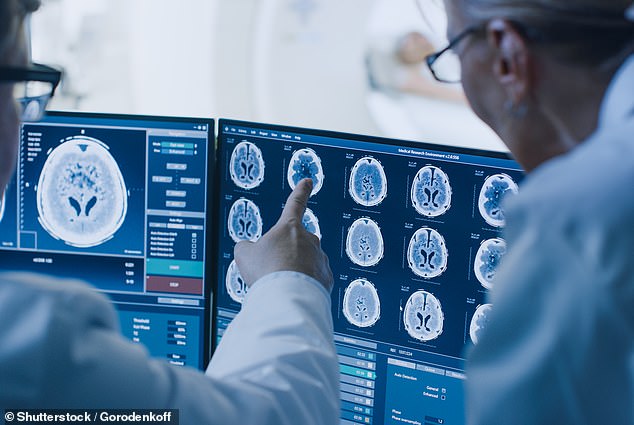 ‘Our findings illustrate that this therapy is an effective way of manipulating the immune system to slow neurodegeneration,’ said Akash Patel, an assistant research scientist in the Center for Cognitive Neurology at NYU Langone Health, in a statement.

HOW TO DETECT ALZHEIMER’S DISEASE

Alzheimer’s disease is a progressive brain disorder that slowly destroys memory, thinking skills and the ability to perform simple tasks.

It is unknown what causes Alzheimer’s. Those who have the APOE gene are more likely to develop late-onset Alzheimer’s.

Researchers compared brain scans and blood samples of the two groups, while also giving the monkeys cognitive tests like puzzles to solve.

The monkeys in the research group showed lower levels of the degenerative proteins and also outperformed the control group on cognitive tests.

‘The similarities in aging between the animals studied and our own species give us hope that this therapy will work in human patients as well,’ said Dr Henrieta Scholtzona, co-senior author of the study and associate professor of neurology at NYU Langone Health, in a statement.

Sholtzona does note that they only used elderly monkeys for the test, and more research will need to be done to find whether the treatment can prevent Alzheimer’s from a younger age.

Researchers believe their drug is more effective than past drugs that have been trialed, as they are not targeting the immune system but instead the brain directly.

Alzheimer’s is the sixth leading cause of death in the United States.

More than 100,000 Americans die every year from the condition and nearly six million Americans are believed to have it.

Last week, the first new Alzheimer’s drug to be available for the public in America since 2003 was given FDA approval.

Aducanumab, which is developed by Biogen and will be sold under the name Aduhelm, received controversial approval after a rocky trial period.

The drug went through two clinical trials, both were ended early as they were believed to have failed.

Data from the second trial was later used to show the drug could potentially stop cognitive decline by 22 percent, though many in the scientific community disagree with the findings.