The Justice Department on Friday released body camera footage recorded by three Washington DC police officers on January 6, showing the moments they were attacked as they tried to rescue a trampled woman.

The woman, Rosanne Boyland, 34, from Georgia, was among four Trump supporters who died as rioters swarmed the U.S. Capitol.

At 4:19pm, the mob can be seen making another push into the doorway of the Capitol, with Boyland among them.

Less than a minute later, the police pushed back, and the mob can be seen tumbling out of the door and down the steps.

The footage shows one of the three officers, identified by the initials A.W., coming out of a tunnel to help Boyland. 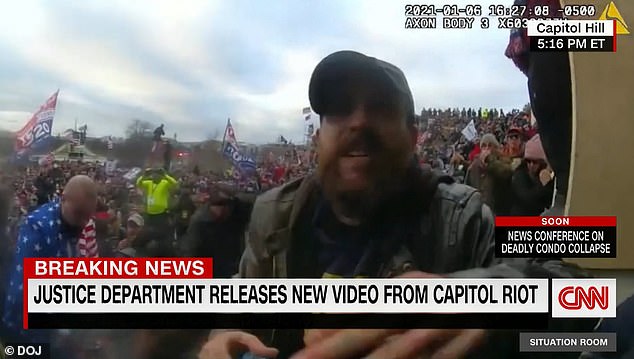 Body camera footage from one officer, identified as A.W., shows him coming out of a tunnel to try and assist Rosanne Boyland, who had been knocked to the ground and trampled. A.W. is confronted by Jack Whitton, pictured, who began attacking him 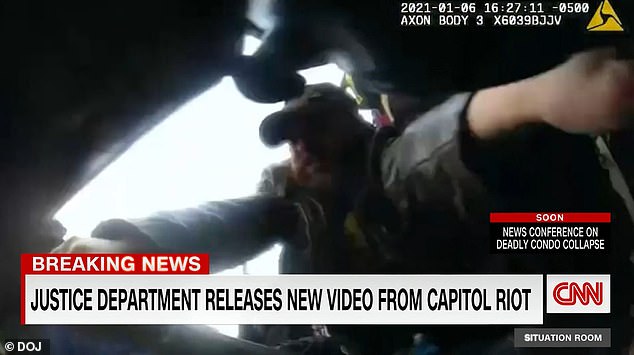 A.W. is wrestled to the flood by Whitton, who then tried to steal his baton 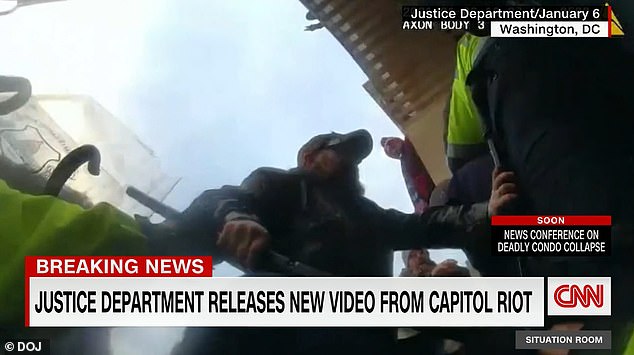 As A.W. lies on his back, Whitton is seen above him shoving other officers out the way

The videos show her body on the ground just outside a door on the Capitol’s west side that was the scene of some of the day’s worst violence. 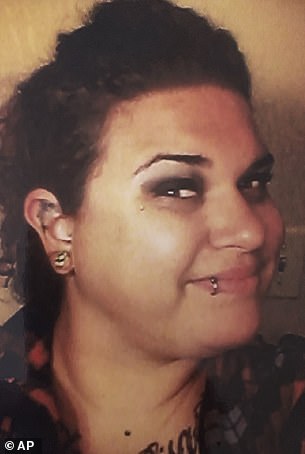 Rosanne Boyland, 34, from Georgia, died during the pro-Trump riot on the U.S. Capitol on January 6

A.W. is knocked off his feet by a rioter, Jack Whitton, who leapt over a barricade to attack the officer, trying to steal his baton.

Above A.W.’s head, insurrectionists are seen using flag poles to smash their way into the Capitol.

A.W., lying on his back, is dragged into the crowd. One man screams ‘traitor’ at him.

A second officer, C.M., tried to help A.W. and an unnamed third officer, who was dragged into the crowd.

Another rioter, Michael Lopatic, rushes towards C.M. and punches him in the head. 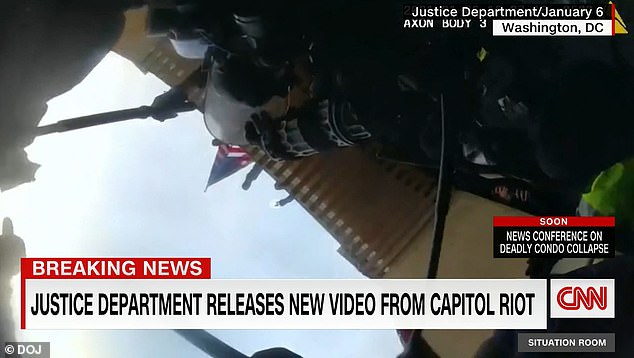 The officer is lying on his back while rioters attack the U.S. Capitol above his head 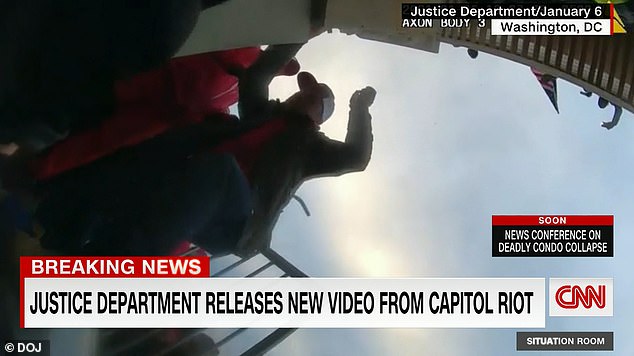 C.M.’s body camera is knocked to the ground, with a splattering of blood.

C.M. was taken to hospital with concussion, although it was unclear if the concussion was in that attack or a later one.

Lopatic has been charged with assault, among other felonies.

On April 7 the Washington DC medical examiner concluded Boyland died as a result of a drug overdose, listing her death as ‘accidental’ and the cause as ‘acute amphetamine intoxication.’

Boyland was pronounced dead at the hospital at 6pm, around an hour and a half after the bodycam footage was filmed.

The Georgia woman had promised her family that she would not get involved in anything violent as she headed to D.C. for Trump’s ‘Stop the Steal’ rally on January 6. 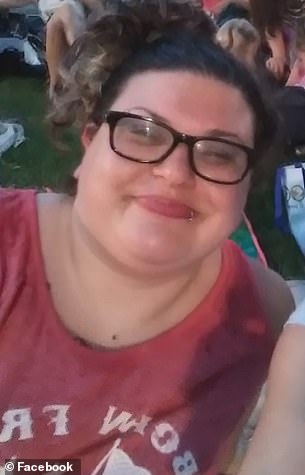 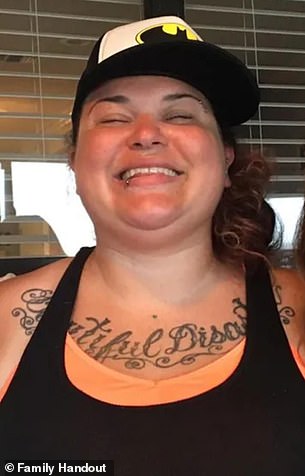 The family of Rosanne Boyland, pictured, has blamed former President Trump for her death in the riot but friend Justin Winchell who was with her when she died blame ‘Antifa’ 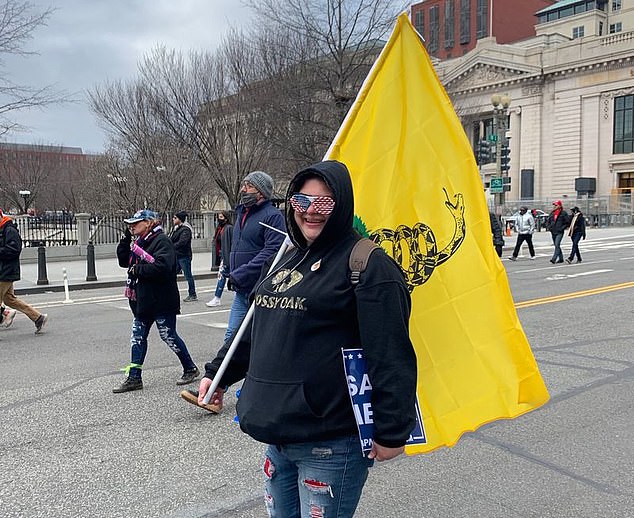 Boyland had earlier been seen carrying a ‘Don’t Tread on Me’ Gadsden flag, an iconic Revolutionary War flag 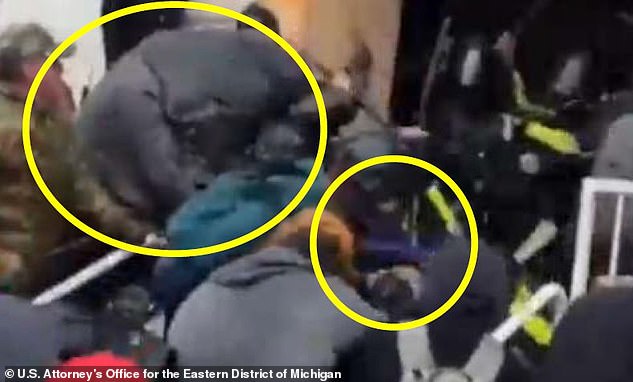 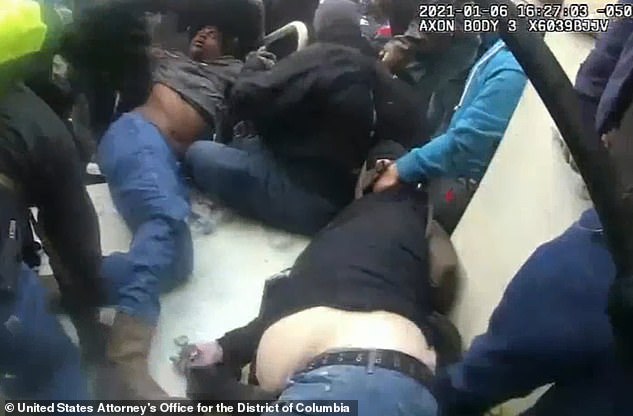 Boyland is seen here lying on the ground on the bottom right as cops face off with rioters. Her friend Justin Winchell, pictured in the light blue hoodie to the right, is heard in bodycam footage of the clash screaming for help as he crys that Boyland ‘is dead’ 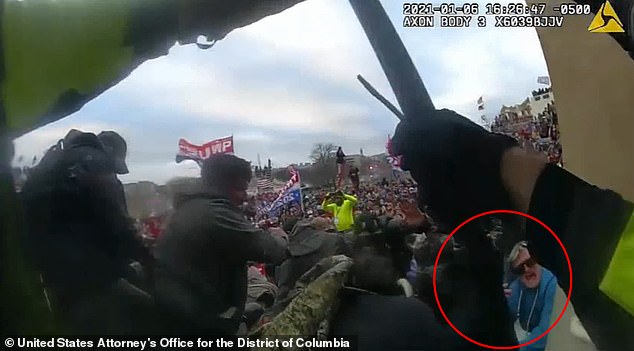 Her family told the New York Post that she had a drug problem but as she began to get clean, got wrapped up the QAnon conspiracy theory and refused to believe that Joe Biden had won the election.

Before her death, she had posted pictures and videos of former president Trump, alongside his unfounded allegations of election fraud.

In an interview with CBS46, Justin Winchell described the terrifying moment as he watched his friend die.

‘People were in there to start stuff, but it wasn’t supposed to be a violent event,’ Winchell said, claiming that a few people began to push others, sparking the riot.

‘They basically created a panic, and the police, in turn, push back on them, so people started falling.

‘I lost a dear, dear friend, an amazing friend,’.

Boyland’s own family have placed the blame with Trump for her death.

The Department of Justice said that six months after the attack, more than 535 defendants had been arrested, and the FBI said they have yet to identify more than 300 individuals believed to have committed violent acts on the Capitol grounds, including over 200 who assaulted police officers.

FBI Director Christopher Wray said late last month: ‘This is far from over.’

French Open 2020: Why the tennis GOAT debate is about so much more than numbers

One airman is killed and three individuals are injured in a street accident at Keesler Air...