A fascinating new book has revealed how punctuation and symbols have developed over thousands of years.

Claire Cock-Starkey’s new non-fiction Hyphens & Hashtags explores how punctuation such as full-stops, commas and exclamation marks have come to be part of our day-to-day writings.

While the question mark is believed to come from Ancient Egypt, where they chose to use the shape of an inquisitive cat’s tail, the hashtag has its origins in the shorthand used by medieval scribes for the Latin libra pondo, which translates as ‘pound by weight’.

Here, in this extract from Hyphens & Hashtags, which is out now, Brits can get a new understanding of the everyday symbols and the truth behind their origins… 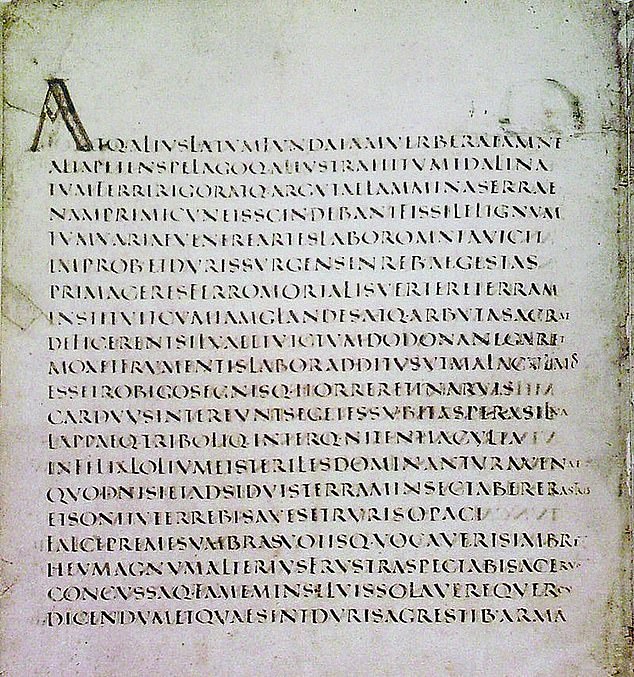 No spaces, no punctuation: Latin was originally written in upper case with no spaces between the words, as seen in this example above. Slowly, symbols and punctuation evolved

In an apocryphal story which first appeared in William S Walsh’s Handy-book of Literary Curiosities (1892), Victor Hugo was said to have instigated the most concise literary correspondence in history.

On the publication of Les Misérables in 1862, Hugo was desperate to know how the book fared, so he sent his publisher a telegram reading simply: ‘?’ The publisher, pleased that the book had sold more than 6,000 copies in its first few days and was due for a reprint, replied: ‘!’ 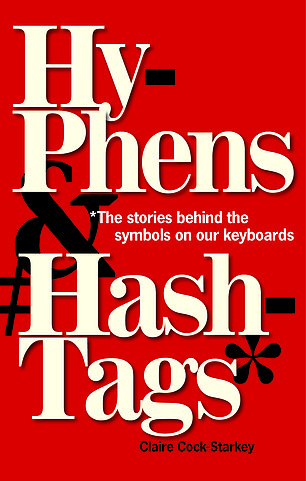 Symbols convey a concept succinctly. They haunt the margins of our keyboards, and shape our understanding of the world. Without punctuation, glyphs and mathematical symbols, all texts would run in endless unbroken lines of letters and numbers.

The story of these characters is one of ebb and flow, from handwritten manuscripts mostly created for the devotion of God, through business records with their need for calculations, via the development of the printing press and the dawning of mass media.

Often it was not the original writer of a work who decided on a symbol, but the scribe who was copying their words. Likewise, as the printing press developed, it was frequently the typesetter who selected which symbol would be cast into type and therefore thrust into popular usage.

In the literary world it was often editors and proofreaders who shaped how a text would reach the public, to the chagrin of writers such as Mark Twain, who wrote in 1897: ‘I give it up. These printers pay no attention to my punctuation. Nine-tenths of the labor & vexation put upon me by Messrs. Spottiswoode & Co consists in annihilating their ignorant & purposeless punctuation & restoring my own.’

Not every symbol has a linear route from invention to common usage. Some, like the ‘percontation mark’ proposed by Henry Denham in 1580, a back-to-front question mark to identify a rhetorical question, didn’t catch on. Some coexisted for hundreds of years; others, like # and @, saw their original meaning lost, only for them to be subbed in for another purpose – proving, at least, that you can’t keep a good symbol down. 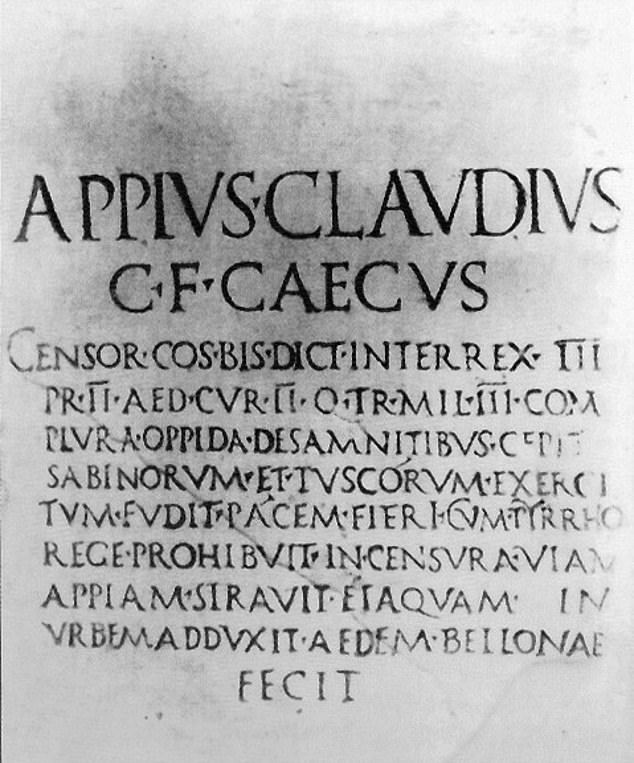 By the eighth century, English and Irish scribes had at last begun to copy texts with dots, then (realising it was easier) spaces between the words, to make Latin easier to decipher for non-native speakers. Pictured, an example of Latin separated by dots, known as an ‘interpunct’

There was still the problem of separating out ideas, or indicating the end of a thought – in rhetoric known as a periodus – and so the monks began using a group of three dots together to mark the close of a sentence. Isidore of Seville (AD 560–636) popularised the single high dot, or distinctio finalis. 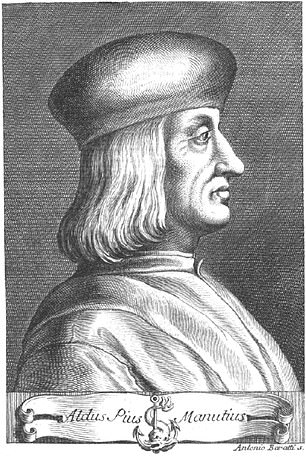 Aldus Manutius, the best printer in Venice in the 1490s, invented a new symbol: the comm

The comma was originally an aid to reading devotional texts aloud.

Scribes used a dot over the word to indicate where a breath should be taken. Then, in the 12th century, Boncompagno da Signa, an Italian scholar, began using the slash or virgule.

The dawn of the printing press saw a number of marks competing for the role of comma.

William Caxton came down on the side of the slash in the 1470s, but Aldus Manutius, the best printer in Venice in the 1490s, preferred to invent a new symbol: the semicircular comma.

Such was its beauty and simplicity that it rapidly spread north and began appearing in English texts from 1520.

The word derives from the Greek kolon, meaning limb. This origin indicates how the colon was perceived as separating the sections, or limbs, of a sentence into clauses.

It was George Puttenham who first used the word colon in English in his The Arte of English Poesie (1589) as a way to describe the length of pauses when reading poetry aloud – the comma being the shortest pause and the colon being twice as long.

One proposed origin is from Ancient Egypt, where they chose to use the shape of an inquisitive cat’s tail.

Another theory derives it from Latin, and supposes that scribes would use a shortened version of quaestio (meaning question) at the end of a sentence to indicate that it was a question.

Over time this was shortened to qo, and then the qo got further shortened, until the q was written over the o, later morphing into the now familiar question mark. Neither story is fully backed up by the textual record.

The origin of the eye-catching mark is unclear, but the most commonly repeated story is that it developed from the habit monastic scribes had of exclaiming joy in their devotional texts. In Latin the word for joy is io, which was written with a capital I above an O. It is said this shorthand for joy slowly morphed into the ‘point of admiration’, used in early printed texts to signify wonderment.

HW Fowler’s A Dictionary of Modern English Usage (1926) cautions: ‘Except in poetry the exclamation mark should be used sparingly.

‘Excessive use of exclamation marks in expository prose is a sure sign of an unpractised writer or of one who wants to add a spurious dash of sensation to something unsensational.’

Similarly, Elmore Leonard asserted that writers should only use an exclamation mark two or three times for every 100,000 words.

In 1962 NASA was launching an interplanetary probe, Mariner 1, with the mission to fly by Venus. Unfortunately a crucial hyphen was omitted from the coding, which specified its speed and trajectory, causing it to explode on take-off. Arthur C Clarke called it the ‘most expensive hyphen in history’.

The origin of the hyphen (or, more specifically, a soft hyphen – one that links words in printed text which are broken by a line break) can be traced to Johannes Gutenberg, father of the printing press.

When printing the first books, Gutenberg was keen to create pages that looked as close as possible to those produced by scribes.

Traditionally, handwritten works were laid out fully justified, with the monks varying the word spacing or size of script to ensure the blocks of text remained flush with neat margins. To replicate this look, Gutenberg assiduously introduced a hyphen to link words that, to keep the text justified, were forcibly broken by pushing them onto the next line. So enthusiastically did Gutenberg employ the hyphen that he would shock any modern typographer – not sticking to syllables as places to break, and even creating a single letter break.

The hashtag, hash or pound sign, as it’s traditionally known in the USA, has its origins in the shorthand used by medieval scribes for the Latin libra pondo, which translates as ‘pound by weight’. They used the abbreviation lb, but this was sometimes misread as 16. As a consequence, by the 14th century scribes took to drawing a line through the top of the two letters, to indicate that the word was itself an abbreviation. This in time developed into the now familiar #.

The hash sign’s journey into ubiquity began in the 1960s, when it was selected by Bell Laboratories to be a function key on their newly designed touchtone telephone keypad. At that time the hash sign served no real function and yet was familiar because it was arbitrarily included on standard typewriters.

The first use of the sign has been ascribed to a letter by Francesco Lapi, a Florentine merchant, in 1536. Lapi used the @ as a shortening of amphorae – a unit of measurement for the wine, grains and spices that were shipped in the large clay jars of the same name. It went on to be used by other merchants to denote ‘at the rate of’, written out as ’15 apples @ 15p each’. As a result, it became known in English as the ‘commercial at’.

One of the earliest examples of the written ampersand was preserved in graffiti on a wall in Pompeii. Although widely used, it did not officially have a name until the 19th century. From the 1700s, when British schoolchildren would recite letters aloud for dictation, they were instructed to use the Latin per se (to mean ‘by itself’) before any single letter such as i or a.

For example, when spelling out a sentence beginning ‘I wish…’ the children would chant, ‘i per se, w, i, s, h…’ so that the listener would understand that the first ‘i’ stood alone and was not attached to the following word. This meant that, in reciting their alphabet, when the children got to the end, in order to incorporate the 27th letter, they would finish with ‘x, y, z and per se and’, indicating that the & stood on its own. This blended into ‘ampersand’.

The Bank of England Museum has a cheque from 1661 with a handwritten pound sterling sign created from an elaborate capital L, with a line through it to show it is an abbreviation of ‘libra’, itself short for ‘libra pondo’, a unit of weight in ancient Rome.

This system of creating a currency symbol has persisted with the symbol for the Japanese yen, created from a Y with two lines through it, and the euro, an E with two lines through it. Likewise, American cents are shown by a C with a vertical line through it. So why is the dollar sign a line through an S and not a D? Most historians believe the sign derived from the Spanish peso. When writing out the currency, merchants would write a large P with a superscript s. This was later simplified with the pillar of the P superimposed over the S: $.

Traditionally in Europe most arithmetic was written out rhetorically in long form and in Latin, with ‘is equal to’ generally written as ‘aequales’ or sometimes shortened to ‘aeq’.

Then in 1557 Robert Recorde, the Welsh mathematician, wrote: ‘And to avoide the tediouse repetition of these woordes: is equalle to: I will sette as I doe often in woorke use, a paire of paralleles, of Gemowe [twin] lines of one lengthe.’ He added: ‘Noe 2 thynges can be moare equalle.’ These parallel lines (drawn longer than those we use today) appeared in his book on arithmetic and algebra, The Whetstone of Witte (1557).

This is an edited extract from Hyphens & Hashtags by Claire Cock-Starkey (Bodleian Libraries Publishing, £12.99), which is out now

In Alsace, "candles" protect orchards from frost as temperatures plummet