A coronavirus related to the one causing the global pandemic has been discovered in the blood of five bats living in Thailand.

SARS-CoV-2, the virus which causes Covid-19, shares 91.5 per cent of its genetic code with that of the newly-identified virus, called RacCS203.

The virus is thought to be unable to infect people as it can not bind to the ACE2 receptor on human cells, Covid-19’s gateway into the body.

However, antibodies circulating in the blood of infected bats and pangolins were found to be effective at neutralising the SARS-CoV-2 virus.

The authors instead think coronaviruses only evolve the ability to infect human cells after first being passed into an intermediate host, such as a pangolin.

Here, it mutates and changes shape slightly which gives it the ACE2-binding facility, the authors theorise.

These findings align with yesterday’s announcement from the World Health Organization that the pandemic likely emerged naturally and the coronavirus was not released from a laboratory. 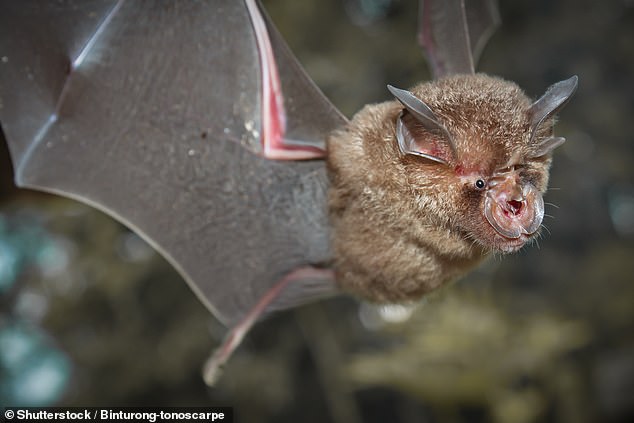 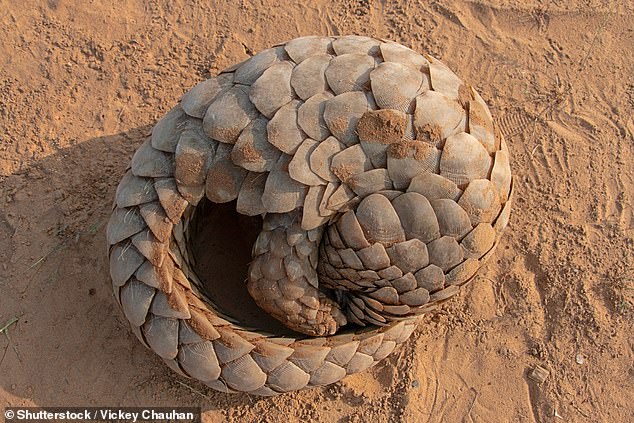 Researchers believe bat coronaviruses may not be able infect humans directly and must go to an intermediate host, like pangolins (pictured), before evolving to infect human cells 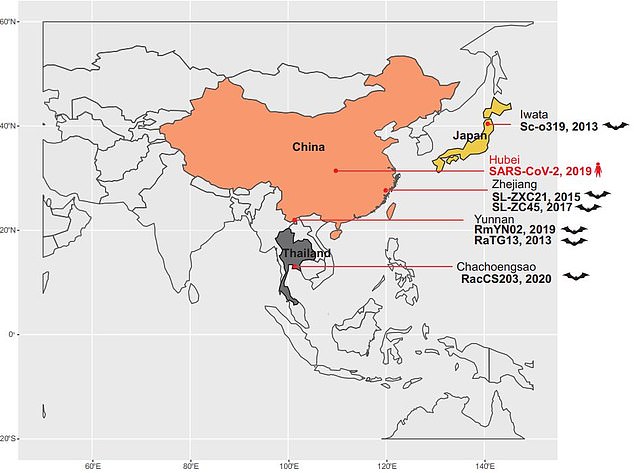 SARS-CoV-2, the virus which causes Covid-19, shares 91.5 per cent of its genetic code with that of the newly-identified virus, which has been called RacCS203. Viruses related to SARS-CoV-2 have now been found across south-east Asia

Researchers led by Chulalongkorn University in Bangkok took samples from bats in a wildlife sanctuary in Eastern Thailand.

They conducted genomic sequencing on the new virus to discover how closely-related it was to other coronaviruses, including SARS-CoV-2.

It revealed the new virus’s closest relative is called RmYN02, a virus which is 93.6 per cent identical to SARS-CoV-2.

While genetically similar (91.5 per cent identical), SARS-CoV-2 and RacCS203 — the new virus — have key differences.

For example, although the spike proteins of the two viruses are genetically similar, a key region on the spikes which binds to the human receptors is very different in shape, making it impossible for the new virus to bind to human ACE2 cells.

The discovery of the new virus adds to a growing bank of knowledge about the family of coronaviruses to which SARS-CoV-2 belongs.

Previously, similar viruses had only been found in China and Japan, but the presence of this strain in Thailand indicates there are far more than previously believed, likely spread over a 3,000 mile range across Southeast Asia. 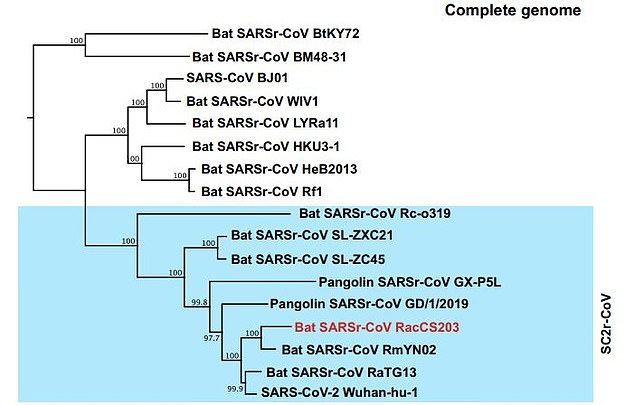 Researchers led by Chulalongkorn University in Bangkok took samples from bats in Eastern Thailand. They conducted genomic sequencing on the new virus RacCS203 to discover how closely-related it was to other coronaviruses, including SARS-CoV-2. It revealed the new virus’s closest relative is RmYN02, a virus which is 93.6 per cent identical to SARS-CoV-2 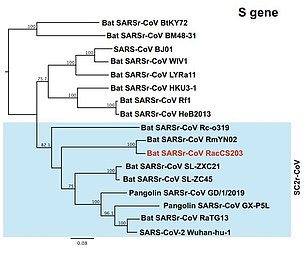 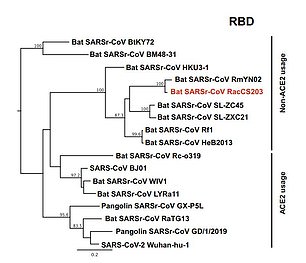 Pictured, two phylogenetic trees showing the genetic similarity of various coronaviruses. Left: the spike protein similarity shows the new virus is similar to SARS-CoV-2. Right: analysis of the shape of a specific part of the spike protein which binds to human cells. It shows the virus is unable to bind to ACE2 and therefore is unlikely to be able to infect humans

WHO scientists sent on a coronavirus fact-finding mission to China have today thrown their weight behind Beijing – dismissing theories the virus leaked from a lab while backing theories that the virus was imported on frozen meat.

Peter Embarek, leader of the WHO team, said that ‘further research’ into the imported meat theory – which is being pushed by Beijing – is needed, along with studies looking at early cases of Covid reported outside of China.

At the same time, he dismissed theories that the virus leaked from a lab in Wuhan, saying the possibility is ‘extremely unlikely’ and does not need to be investigated further – despite US government officials calling it ‘the most credible’ theory a few weeks ago.

The findings, which mark the end of the WHO’s mission to Wuhan, amount to an almost full backing of Beijing’s explanations for the source of the pandemic and will be a PR coup for the ruling communist party.

It will also give ammunition to WHO’s critics, who feared the investigation would be used to give legitimacy to a Chinese white-washing exercise with possibly embarrassing or incriminating evidence hidden from investigators.

It is hardly the first time that the WHO has come under fire for uncritically parroting information from Beijing – ex-President Trump made the same allegations last year.

Professor Martin Hibberd, from the London School of Hygiene & Tropical Medicine, who was not involved with the study, said: ‘This paper has identified a further bat coronavirus that is thought to be related to the SARS-CoV-2 strain currently causing the human pandemic.

‘This new finding from Thailand emphasises the broad distribution of the bats and viruses that may include the originator of the current outbreak.’

Viruses closely related to SARS-CoV-2 are found in four species of horseshoe bats, which are known to be ‘reservoirs’ of many pathogens.

The range of these species spans as far west as India, covers all of Southern China and reaches as far east as Japan. The southern tip of their range includes the Philippines and Singapore.

Scientists are keen to discover the evolution of the SARS-CoV-2 virus to learn where it came from, in order to prevent future outbreaks of similar pathogens.

Previous research revealed the Covid-19 virus’s closest relative is another coronavirus harboured by bats, called RaTG13. The two viruses are 96 per cent identical.

This similarity also indicates the virus evolved naturally in an animal host, likely a bat, before infecting an intermediate species and then jumping to humans.

Yesterday, the World Health Organization (WHO) revealed it is ‘extremely unlikely’ SARS-CoV-2 was leaked from a lab in the Chinese city of Wuhan.

A team from WHO dispatched to China to determine the virus’s origin made their first press conference yesterday after China delayed the mission.

Dr Peter Ben Embarek from WHO said: ‘Our initial findings suggest that the introduction through an intermediary host species is the most likely pathway and one that will require more studies and more specific targeted research.’

The authors of the latest study write in their paper, published in Nature Communications: ‘Cross-border surveillance is urgently needed to find the immediate progenitor virus of SARS-CoV-2.’ 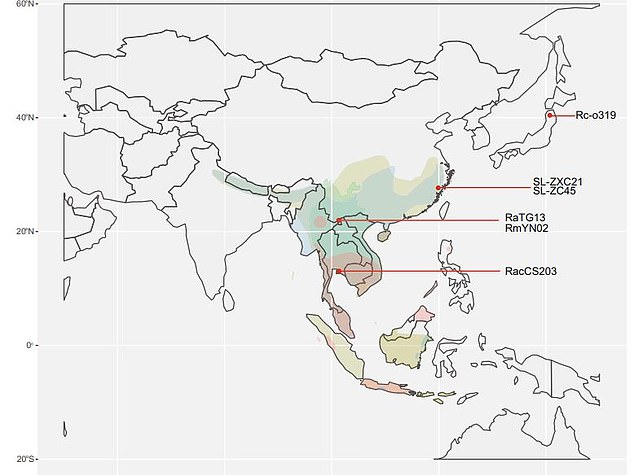 Viruses closely related to the SARS-CoV-2 coronavirus are found in four species of horseshoe bats, which are known to be ‘reservoirs’ of such pathogens. The range of these species (pictured) spans as far west as India, covers all of Southern China and reaches as far east as Japan. the southern tip of their range includes the Philippines and Singapore

How to celebrate Mardi Gras at home with these 10 ideas

How to celebrate Mardi Gras at home with these 10 ideas