‘New Jungle’ camp near Dunkirk is cleared by French police


France is clearing out a migrant camp near Dunkirk dubbed the ‘New Jungle’ after 1,500 people set up camp there.

Interior Minister Gerald Darmanin tweeted Tuesday that police had sent to dismantle the camp, located on dis-used industrial land in the commune of Grande-Synthe.

Thirty police vans filled with officers from the French national reserve police were on-site this morning as migrants – including women and young children – packed up their belongings and were taken away.

Migrants will be taken to nearby ‘centres’ so their asylum cases can be assessed, local media said. It is unclear how many will be allowed to remain in Europe. 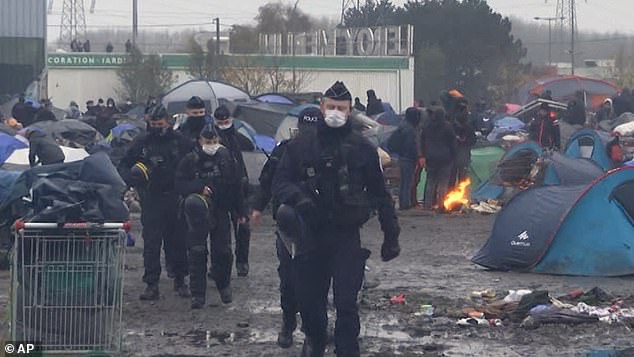 French police have moved in to clear out a huge migrant camp dubbed New Jungle that had built up in the commune of Grande-Synthe, near Dunkirk 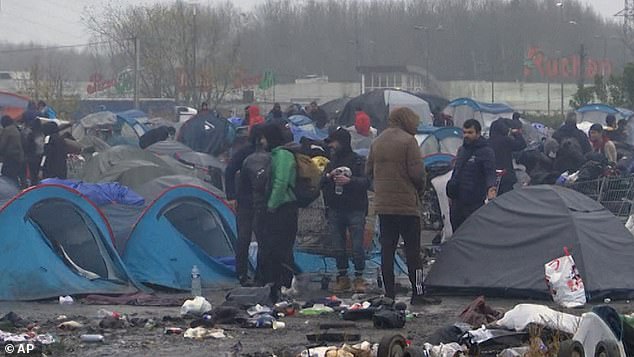 Around 1,500 migrants, most of whom were hoping to make the journey to the UK, have now been taken away to asylum centres so their claims can be assessed

Mr Darmanin tweeted:  ‘On my instruction, the police are proceeding with the evacuation of the illegal migrant encampment in Grande-Synthe this morning.

‘Thank you to the police and gendarmes mobilized, as well as to the agents of the 59th prefecture who ensure their shelter.’

The police operation came just hours after Mr Darmanin spoke with British counterpart Priti Patel migrant crossings in the Channel, which have hit record levels in recent days despite commitments from both sides to reduce them to zero.

A joint statement issued after the phone call vowed greater cooperation between the two countries to make the Channel migration route ‘unviable’.

However, Mr Darmanin’s office was keen to insist on Tuesday that the clearance of the Dunkirk camp was not a direct result of that call and had been pre-planned.

Emmanuel Macron’s government had accused the UK of treating France like a ‘punch ball’ as 1,185 migrants crossed the Channel last Thursday – eclipsing the previous daily high of 853.

London has long accused Paris of failing to do enough to stop the crossings and threatened to withhold a £54million payment agreed earlier this year. 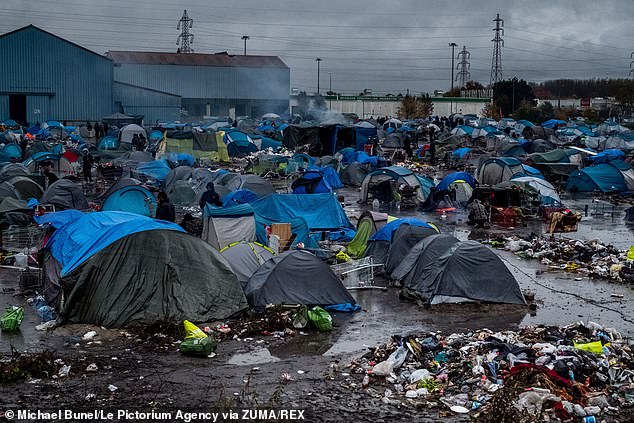 The migrants call the camp the New Jungle after the infamous shanty town housing 8,000 in Calais was pulled down by the French government several years ago 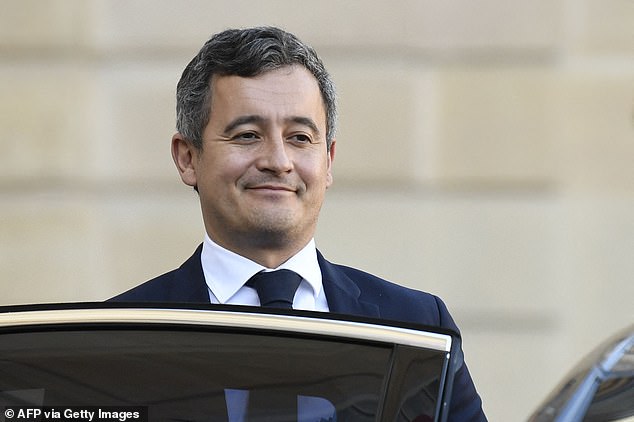 French Interior Minister Gerald Darmanin ordered the camp to be dismantled Tuesday, though his office insisted it was not related to Priti Patel’s request for more action

France has insisted that the money would allow them to step up coastal patrols and intercept crossings.

There have been allegations of French inaction as part of a ‘Brexit punishment strategy’ amid ongoing rows over fishing rights and border rules in Northern Ireland.

Relations between France and Britain are at their lowest point in decades due to a host of disagreements on issues ranging from migrants to fishing in the Channel, as well as a submarine contract with Australia.

Migrants have been gathering at the Grande-Synthe site since at least March this year, when French police last cleared the camp out.

Aiming to stop the migrants returning, officers dug up waste land on which they had been camped.

But this only prompted them to move to a nearby industrial site, and into the ruins of an old paper mill.

Migrants began gathering at the new camp around September when there were just a few hundred of them living there.

But numbers trebled in just a matter of weeks, and stood around 1,500 by the time police moved in.

Most of those camped at the site, which is located 20 miles from Calais, had been hoping to reach the UK.

With hundreds more people arriving at the camp each day, it quickly turned into a rubbish-strewn mess with ankle-deep mud formed during rain. 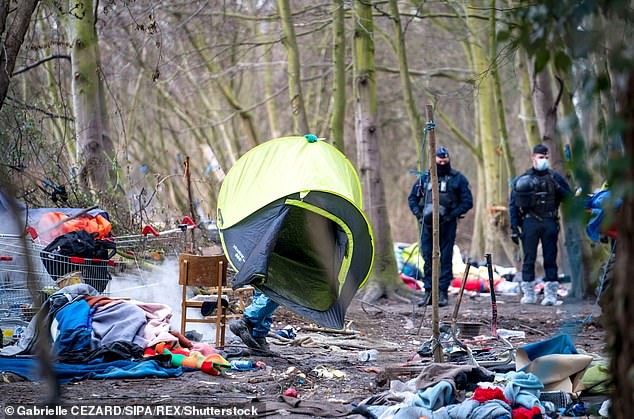 Police are pictured clearing the Grande-Synthe camp back in March this year, when the number of migrants was in the low hundreds rather than the thousands

The dis-used factory units surrounding the camp provided little protection from the elements, even as winter weather sets in.

There were not enough toilet facilities for the number of people living there, who were relying on local charities for food deliveries.

Some were Afghan migrants, among the first to arrive in Europe after the near-total collapse of the country as it fell back into Taliban hands earlier this year.

Others had made it into Europe by sneaking across the Poland-Belarus border, where a crisis the EU accuses Alexander Lukashenko of engineering is playing out.

Thousands of people are living in shabby tents cramped together at the Grande Synthe camp, with rubbish and debris strewn between them. It appears to be based at an industrial unit with the setting providing very little protection from the elements to the migrants.

The first appearance of Jennifer Gates after her marriage to Nile Nassar.. a simple look and a luxurious bag

Hollywood movie accessories and costumes sold in an online auction for $8 million.. Photos

Hollywood movie accessories and costumes sold in an online auction for $8 million.. Photos