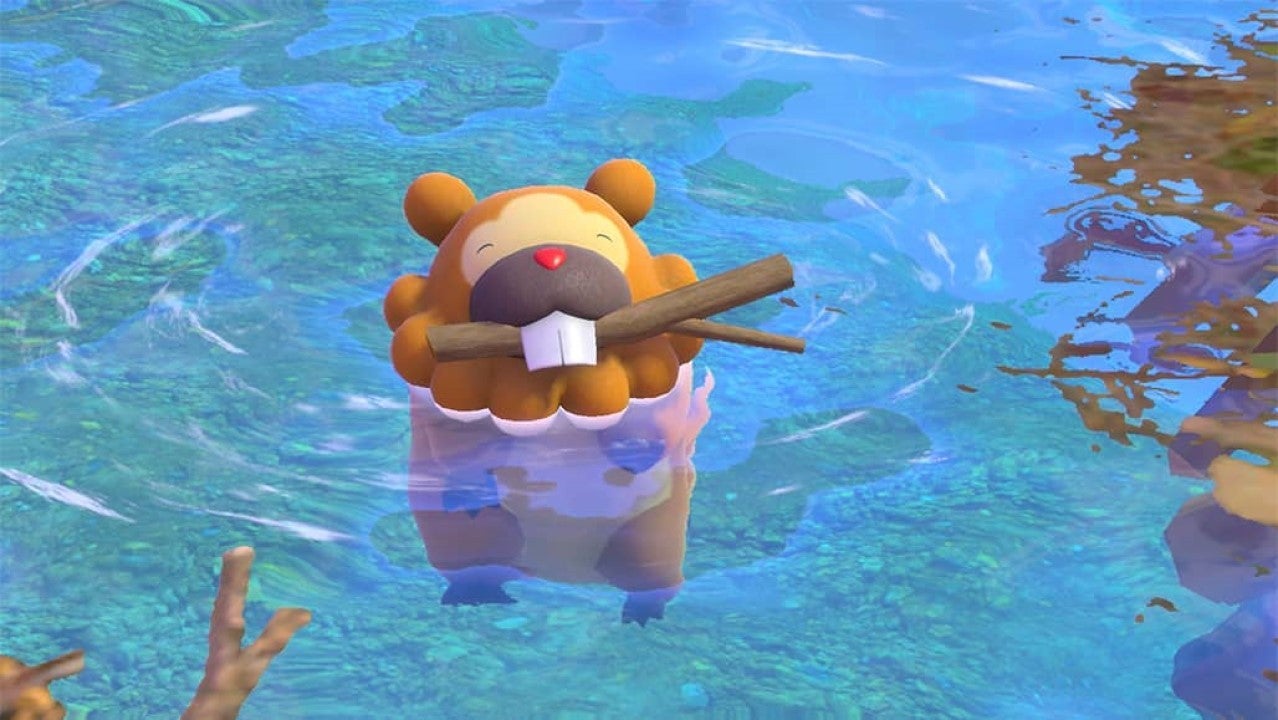 There’s a stage in Pokkén Tournament called Neos City, where if you take your eyes off the fighting game action for a moment, you can see a much larger Pokémon world beyond the arena. Pokémon and humans walk side by side down the street, and there are shops, signs, vehicles, and billboards that hint at Pokémon living and working together alongside humans. In another stage, a Magikarp Festival is in full swing. And in another, Pokémon and humans laze about an old city square. There’s a serene Wobuffet laying on a bench in the background.

Revisiting these scenes, it’s far less surprising that Bandai Namco was tapped for New Pokémon Snap, a game about portraying Pokémon not as static figures across from one another in a battle arena or wandering aimlessly through tall grass, but as real, living creatures. Both games seem to me to be part of a growing trend where The Pokémon Company lends its license to third-parties with the aim of creating worlds exactly like this, where Pokémon are portrayed seamlessly with the real world. Think the Detective Pikachu movie, or Pokémon Go.

Because of Pokkén Tournament, we got another opportunity to do something together again.

“Pokkén Tournament utilized Bandai Namco Studio’s strengths and it made Pokémon appealing in a new way,” he says. “Because of this, we got another opportunity to do something together again and this led to the development of New Pokémon Snap. We were able to talk with the developers [from the original game] and the project started with the involvement of many people.”

Suzaki also affirms that my theory about making Pokémon a seamless part of the world is correct. The original Pokémon Snap did this, of course, but was at the time limited by the technology available at the time. 22 years later, New Pokémon Snap can make better-looking monsters interact in more believable ways with a better-looking world.

We tried to make Pokémon move naturally and with the feel of presence so that it’s fun to just watch them.

“The main focus was to build the world where wild Pokémon actually live in this game,” Suzaki says. “To do this, we first set out to create an exciting world by thinking about the environment in which Pokémon live, creating scenery in detail, and also using Switch hardware’s capabilities to the fullest. While doing so, we tried to make Pokémon the star of the game by making them move naturally and with the feel of presence so that it’s fun to just watch them and it’s even more fun to take pictures of them.”

Suzaki says that another key focus of the team in creating a sequel was increasing the number of Pokémon available. The original Pokémon Snap only had 63 of the then 151 Pokémon. Now, with somewhere over 800 Pokémon in existence across every Pokémon game (the number varies depending on whether you count different forms separately), New Pokémon Snap has the opportunity to feature even more — over 200, in fact, as Suzaki has told Game Informer.

Pokémon Snap is 22 years old now, and the announcement of a sequel seemed to come out of nowhere. After all, what game gets a sequel that long after the fact? After years of silence but for the quiet release of the original Pokémon Snap on the Wii U Virtual Console in 2017, New Pokémon Snap was received with a wave of social media excitement upon its announcement last year, especially from fans with fond memories of the original.

Suzaki suggests Bandai Namco was well-aware of global fan interest in Pokémon Snap, and points to the capabilities of the Nintendo Switch as a key reason why now was a good time to make a new entry. But he also notes that “the idea of photography has changed so much in the last 20 years,” indicating that these shifts were also a significant motivator in bringing Pokémon Snap back. Though he didn’t elaborate on this point, it’s already at least somewhat visible in the photo editing mode we’ve seen in prior Pokémon Snap previews, as well as the shift from printing out photos at Blockbuster kiosk (remember THAT?!) to sharing them on social media via the Switch’s built-in image share features.

Even though Fluffruit doesn’t hurt when it hits a Pokémon, it’d make sense that some Pokémon don’t like being hit by Fluffruit.

Another key change from the original Pokémon Snap that fans may have picked up on already is the lack of “Pester Balls,” which were little balls that exploded in a purple gas when thrown at Pokémon, irritating them. More subtle is the shift from “Apples” to “Fluffruit” as an item thrown to entice Pokémon, and in our preview I was told that Fluffruit explicitly does not hurt Pokémon if it hits them when thrown. Put simply, there’s a bit more of an emphasis on treating Pokémon like, well, actual living creatures who don’t deserve to have noxious irritating gas or painful solid objects lobbed at them when they’re just vibing in their natural habitats.

Suzaki didn’t put it quite so bluntly but, yes, there was a humane angle to these changes.

“Of course, we also thought that some modern changes would need to be made,” he says. “The Pester Ball was an important element to bring out Pokémon’s reaction in the Nintendo 64 Pokémon Snap, so we decided to add the role of the Pester Ball to the Fluffruit in New Pokémon Snap. Even though Fluffruit doesn’t hurt when it hits a Pokémon, it’d make sense that some Pokémon don’t like being hit by Fluffruit. So we designed the item to leave it up to players whether they place it near a Pokémon or throw it at a Pokémon.”

It seems there are far more changes to what fans of Pokémon Snap might expect than are immediately apparent on the surface. In our preview, we saw the introduction of branching pathways, and in the aforementioned Game Informer article, the developer revealed that as the player’s research level increases, new Pokémon might appear in areas they were not seen previously, or exhibit new behaviors that weren’t available before. With all the Pokémon in existence to choose from and a planet’s worth of potential ideas for Pokémon habitats, New Pokémon Snap seems like it could be ripe for DLC or expansions down the line — unfortunately, Suzaki responded to my question about this by simply telling me they had nothing to share on this topic at the time.

But the very fact that New Pokémon Snap already feels so open to expansion goes to prove my point — Pokémon no longer seems like a series built solely around inventing new monsters to throw into the same turn-based battles. Those monsters are now just as exciting for their behaviors, and their agency, and their relationships with both humans and the environment, and The Pokémon Company appears to be acknowledging that in a new string of media. Just as these newer projects take pains to show Pokémon living with humans, games like New Pokémon Snap feel designed to allow us humans to live a little closer to our Pokémon.

‘We will look after Granny for you’: Princess Eugenie pens an emotional tribute to Prince Philip