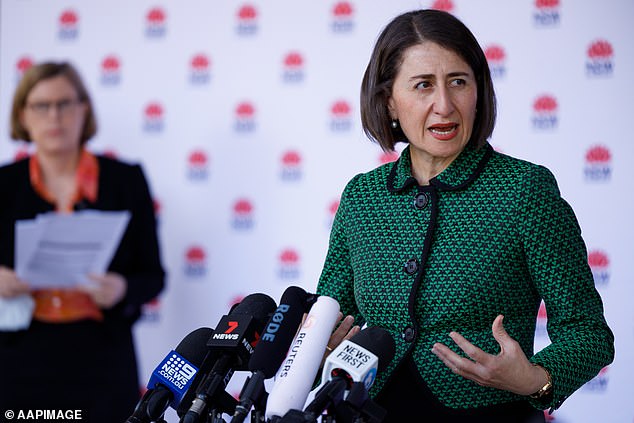 New South Wales has recorded five new local cases of coronavirus as Gladys Berejiklian warns the disease is ‘bubbling away in the community’.

One case is linked to the Berala cluster and is a close contact of a previously reported case and two cases, from the Northern Beaches, are household contacts of each other and the source of their infections is under investigation.

A man who in his 40s who went to Mount Druitt Emergency Department on Saturday 9 January and his close household contact have also tested positive, with the source of their infections under investigation.

The hospital was closed for cleaning on Monday morning and has now re-opened.

There were only 14,738 tests reported to 8pm on Monday night, compared with the previous day’s total of 18,570, prompting calls for greater testing.

Health Minister Brad Hazzard asked multi-cultural families in Sydney to stick to the rules on family gatherings which are capped at five visitors to homes.

‘I know it’s great to have large families around but it’s proved challenging in the last few weeks.

Ms Berejiklian hit back at Western Australia Premier Mark McGowan who has called for greater restrictions in NSW to eliminate the virus.

‘The idea that you tick along with the virus and somehow that is a better model is wrong,’ he said on Tuesday.

Ms Berejiklian said elimination was not possible because Australians have to be allowed to return from overseas.

‘But all of us have the aim of zero community transmission.’

The COVID-19 pandemic led to at least 16,000 extra US heart disease deaths