By Aidan Wondracz and Alana Mazzoni For Daily Mail Australia

A once-in-a-century storm event has delayed the next phase of the Covid-19 rollout in New South Wales.

Thousands of residents in regional towns and parts of greater Sydney will not be receiving the vaccine when phase 1b begins on Monday.

More than six million people across the country were scheduled to begin receiving the vaccine.

Though flash flooding and torrential rain has forced the closure of several roads and supply routes in New South Wales. 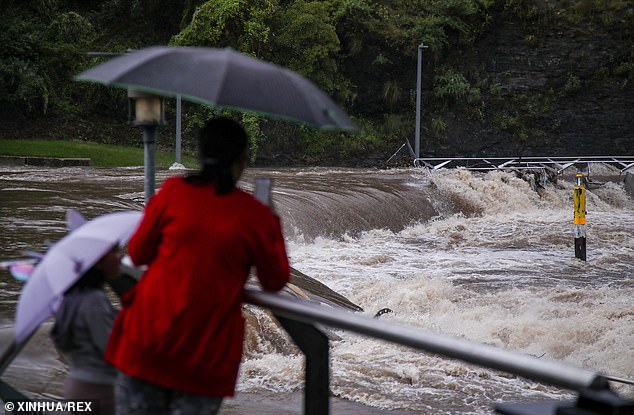 The Department of Health warned the rollout could be delayed by several days, with regional towns hit the hardest.

‘Vaccine delivery is being affected in Sydney and across multiple regional NSW locations,’ a spokesperson said.

‘The Department of Health is working directly with GPs on these issues and we ask for the public’s patience with these unforeseen supply delays.’

The Department of Health will provide updates on Monday.

‘Clearly there will be expected disruptions for many freight and logistics movements as a result of these floods and vaccines are not exempt from that,’ he told Sky News.

‘We’re working with freight and distribution companies that are getting the vaccine from point A to point B to understand how that will be impacted.’

Daily Mail Australia contacted the Department of Health for comment.

Flash flooding and heavy rain has battered the east coast with residents evacuated from their homes along northern New South Wales and Greater Sydney.

An evacuation order has been issued for Picton in southwest Sydney after the Warragamba dam started spilling over on Saturday afternoon, causing river levels to rise along the Nepean and Hawkesbury rivers.

‘As a result of rising flood waters people within the Picton CBD should prepare to evacuate,’ the NSW SES said.

‘Residents should monitor the situation and be prepared to evacuate when instructed to do so. A flood evacuation order will be issued by the NSW SES if evacuation is required.

‘Once floodwaters begin to rise in Stonequarry Creek you will see flooding of roads, sewerage lines and power may be lost, and properties to be inundated. If you remain in the area you may become trapped and it may be too dangerous for NSW SES to rescue you.’

Residents in the Pitt Town Bottoms, Cornwallis and North Richmond areas west of Sydney were also told to evacuate in the dead of night as the Hawkesbury River began to flood.