New South Wales has recorded two new cases of Covid-19 overnight as the number of sites exposed to the virus across the state ballooned to 35.

Health officials in NSW confirmed the community infections along with five cases in hotel quarantine detected in the past 24 hours.

Four new cases were earlier announced in Sydney on Sunday, bringing the total number of infections in the city to 13 as dozens of businesses from Parramatta to Bondi were added to the growing list of exposure sites.

An emergency national cabinet meeting has meanwhile been called for Monday morning to address the vaccine rollout, which has been plagued by delays.

Greater vaccination rates are hoped to curb any further outbreaks across the nation, stopping them from ballooning to unmanageable levels or causing snap lockdowns.

Premier Gladys Berejiklian also tightened restrictions in NSW as she enforced mask use on public transport and inside public spaces in Randwick, Bayside, Canada Bay, Inner West, City of Sydney, Waverley and Woollahra.

She said the ‘next few days are critical’ and urged residents ‘not to be complacent’.

‘If cases continue to emerge, we will need to go further,’ the Premier said.

Finance Minister Simon Birmingham was forced to defend the vaccine rollout on Monday morning after it was labelled a ‘shambles’ by the Victorian government.

Queensland recorded no new cases a day after a flight attendant tested positive in Brisbane. 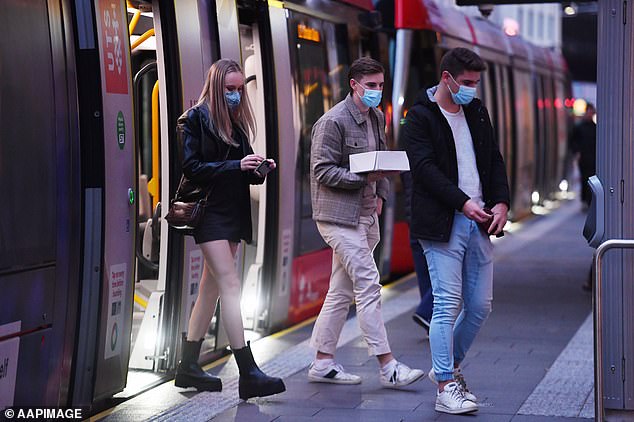 National Cabinet are meeting for an emergency discussion about getting more Covid vaccines, as masks once again become mandatory indoors in areas of Sydney (pictured, tram users in the city’s CBD on Friday)

‘I don’t accept all of that,’ Mr Birmingham said when asked by breakfast host Karl Stefanovic if he agreed with that assessment of the bungled program.

The senator said 2.3million doses of the Pfizer vaccine were being administered in June alone, while another 3.4million vials would arrive in Australia for processing next month.

Mr Birmingham blamed issues out of the government’s control for the delays, including safety issues with the AstraZeneca vaccine and supply disruption in Europe.

‘There have just been things that have hit along the way. We’ve had to respond and pivot as best we can,’ he told the Today show. 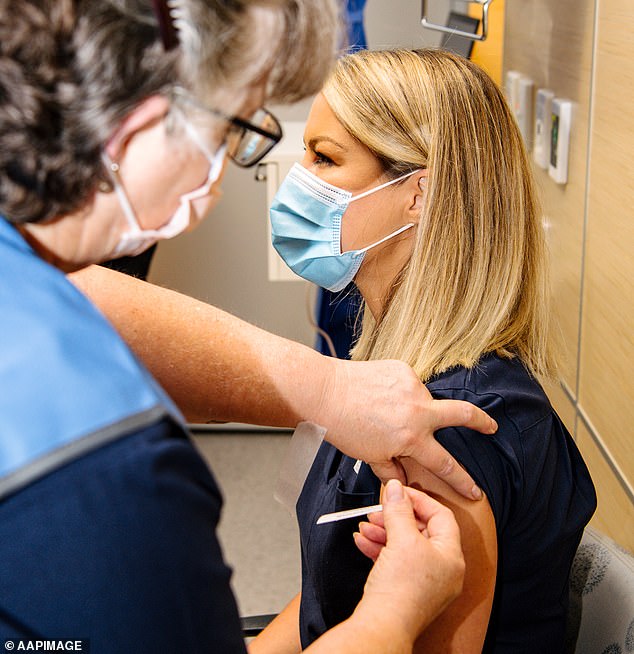 ‘Obviously there have been disruptions – disruptions we wish had never occurred. It would be far preferable if the AstraZeneca vaccine had been able to be administered to all Australians.’

The federal government on Thursday was advised to only give AstraZeneca doses to over-60s after seven people in their 50s developed rare blood clots due to the jab in the space of a week.

A public health expert said New South Wales was paying the price because the airport worker who sparked the outbreak may not have been vaccinated.

The limousine driver – whose role involved transporting international flight crews – tested positive last week and authorities are now investigating whether he had been immunised against Covid-19.

‘The driver was not wearing the best possible PPE and doesn’t seem to have been vaccinated,’ University of NSW strategic health policy consultant Bill Bowtell told The Sunday Project.

‘That’s how it got out into the community.

‘The cost of getting that [vaccinations and protective equipment] right at Sydney is trivial compared to the costs the community is now incurring because we’re having to go through this progressive expansion of masking and lockdowns.’ 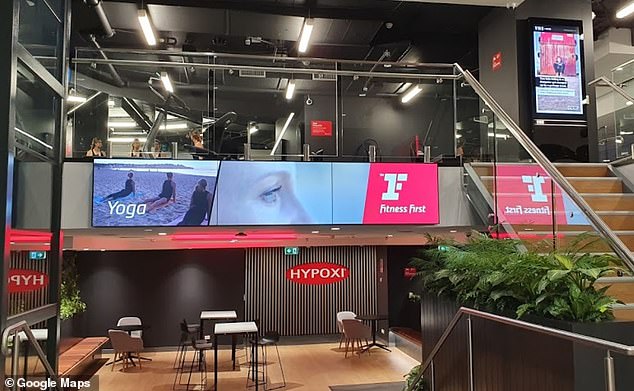 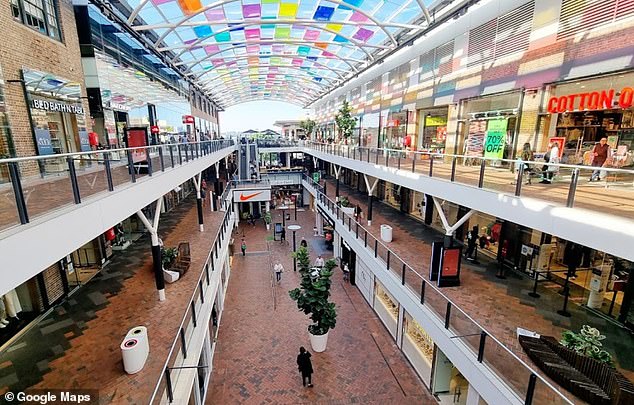 Brisbane is also on alert after an international air crew member tested positive for the virus on Saturday, after spending 14 days in hotel quarantine, and having travelled into the CBD while potentially infectious.

Anyone who was in Brisbane Airport between 4pm and 4.30pm on Saturday June 19 must get tested and isolate until they receive further instructions, and the same goes for anyone who was at the Brisbane Portuguese Family Centre from 7pm on the same day.

Premier Annastacia Palaszczuk said the flight attendant had been in the community in Brisbane’s CBD, but only for a short time.

Victoria recorded no new cases on Sunday, but state Health Minister Martin Foley said his government would raise concerns about the vaccine shortage in the emergency meeting on Monday. 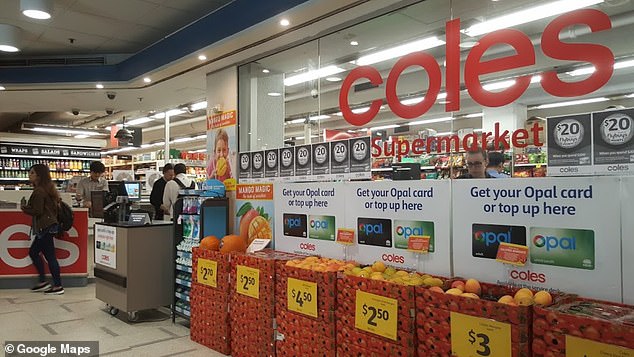 Pictured: Coles supermarket in Wynyard, where a person infected with Covid went on June 17, has also been added to the exposure list 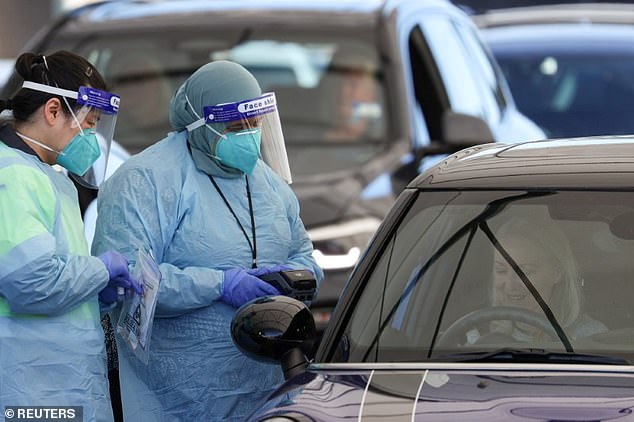 He said he would urge the Commonwealth to treat the vaccine rollout as a ‘race’.

‘We do not have the supply of second doses from the Commonwealth to match the demand for first doses,’ he told reporters in Melbourne.

‘But we’re working with what we’ve got and WA has been very successful. We have vaccinated a higher proportion of our population than any mainland state,’ he told reporters in Perth.

The shortage is a result of the rare blood clotting disorder associated with the AstraZeneca vaccine – meaning Australia needs more Pfizer jabs.

Pfizer has an agreement to supply 40 million vaccines to Australia in 2021, with two jabs needed to fully vaccinate one person.

Trials are also expected to begin by the end of this year into making Australia’s first locally developed vaccine, which would use the same mRNA technology as Moderna and Pfizer – both highly successful jabs.

Hero Suchi restaurant in the CBD was also added, along with a fitness centre in Castle Hill in the north-west, and a Big W store in Merrylands.

Anyone who visited North Face, Country Road or Seed at the Drummoyne outlet centre on Tuesday June 15 between 11.35am and 1pm is considered a close contact.

Close contacts have been told to contact NSW Health immediately, get a Covid test and isolate for 14 days regardless of the results, with experts fearing people may test negative in the early stages of the virus.

Shoppers who has visited any of the other venues on the list are considered casual contacts and must self-isolate until they test negative to coronavirus. 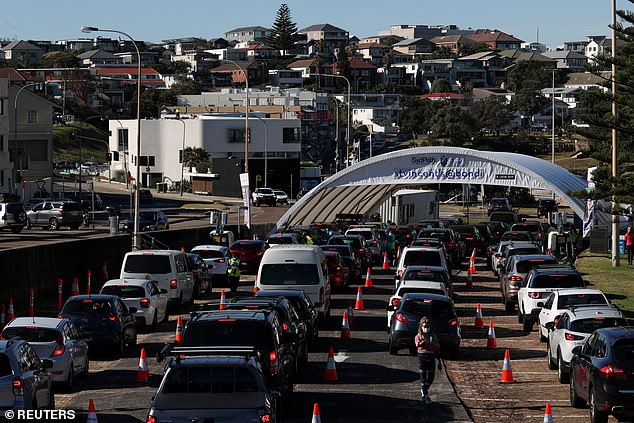 The Bondi cluster has swelled to nine cases with four more in NSW without known sources (pictured, the drive-through testing clinic in Bondi)

Premier Gladys Berejiklian announced masks would be required to be worn at most indoor venues across seven local government areas from 4pm on Sunday.

‘You must wear a mask if you are in and around those seven local government areas,’ Ms Berejiklian said.

‘That will include things like hospitality workers, shopping, retail shopping, any interactivity where you aren’t eating or drinking, you will need to wear a mask.’ 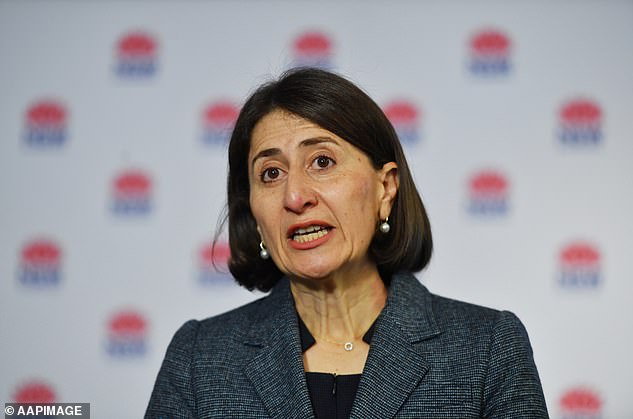 On Sunday, Premier Gladys Berejiklian (pictured) announced masks would be required to be worn across seven local government areas

Ms Berejiklian also announced face mask rules on public transport would be extended from Sydney to Wollongong and Shellharbour.

‘It is important for all of us to be on high alert, no matter where we live in particular,’ she said.

But the premier stopped short of bringing in any lockdown rules, saying it was not likely further restrictions would have to be brought in for the time being.

Below is a list of council areas where the mandate applies:

‘At this stage, we don’t think we will need to do further than what we have announced today,’ she said.

‘I know all of us are a bit fatigued after so many months of living with Covid but we can’t drop for now.’

One of the new cases announced on Sunday was a 30-year-old man who visited Bondi, Surry Hills, Westfield Bondi Junction, and The Broken Drum Cafe in Fairy Meadow in the NSW Illawarra region.

The other case was a woman in her 30s who was a household contact of the man.

One was a woman in her 50s who was a close contact of a previously confirmed case while the other was a man in his 50s linked to a Salvation Army store.

The cases will be officially included in Monday’s figures.

Dr Chant put out another call for residents to get tested if they visited Westfield Bondi Junction, and its car park, on June 12 or 13, with every customer – regardless of time or specific store – told to test and isolate if they feel even the slightest bit unwell. 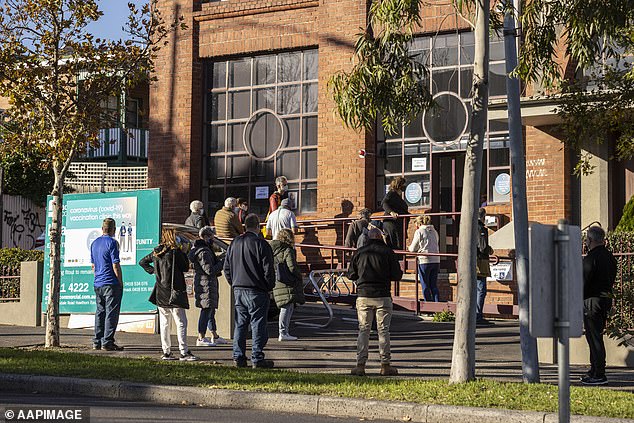 People line up outside a COVID vaccination centre in West Melbourne, Monday, May 31. It is feared that Australia’s supply of AstraZeneca could go unused with an increasing number of people recommended to get the Pfizer jab

‘If you have been to any of those venues or have any symptoms, you need to isolate,’ she said.

Covid-19 fragments have also been detected in sewerage from the Brookland catchment- which serves parts of the Central Coast.

‘We are calling for the community to come forward for testing,’ Dr Chant said.

‘At this stage, we have not been able to identify positive cases in the catchment. We don’t have a full ability because people move around.

‘But we have not had anyone residing there that has been recently discharged from our hotel quarantine.’

Anyone who attended the following venues at the listed times must call NSW Health on 1800 943 553, get tested and self-isolate for 14 days, regardless of test results.

Anyone who attended the following venue at the time listed must get tested and self-isolate for 14 days from the date they were at the venue until a negative test result is received.

Drummoyne, Christensen Copenhagen at the Birkenhead Point Brand Outlet – Tuesday June 15, 10.30am – 11am

Anyone who has visited the following stores within the listed times should monitor for symptoms. If they appear, isolate until a negative test result is received.

Drummoyne, food court and female toilets at the Birkenhead Point Brand Outlet – Tuesday June 15, 11am – 1.30am