New weapon in battle with cancer caused by asbestos 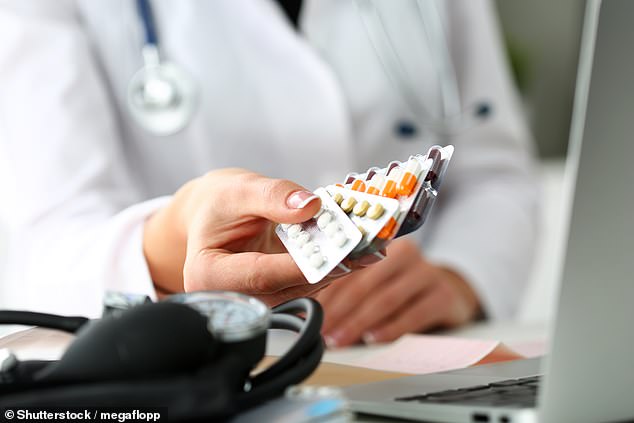 Patients who have been hit by deadly asbestos lung cancer are living longer, healthier lives thanks to a breakthrough immune-boosting therapy.

Results from a trial show the drug nivolumab can help keep the aggressive disease mesothelioma at bay for months or even years.

For patients with the disease, any extra time can be priceless as only seven per cent of sufferers live longer than five years.

Professor Gareth Griffiths, the director of clinical trials at the University of Southampton, said: ‘Mesothelioma is incredibly hard to treat.

‘Most patients get chemotherapy, but for the majority this will eventually become ineffective. When the cancer returns there’s nothing you can do to stop it.

Results from a trial show the drug nivolumab can help keep the aggressive disease mesothelioma at bay for months or even years. Pictured: Stock image

‘For the first time we have shown there’s an effective next step after chemo.’

Men are affected more commonly than women because mesothelioma is almost always caused by exposure to asbestos, a kind of insulation that was once widely used in flooring and roofing but is now banned.

If intact, asbestos insulation causes no harm, but if it’s broken up, tiny fibres are released into the air. These can easily get into the lungs where they become stuck and cause damage over time.

The scarring caused by asbestos fibres in the lining of the lungs is the prime location for cancerous mesothelioma cells to form.

Asbestos was withdrawn from use in the UK in 1999, but cases of mesothelioma have increased by 61 per cent since the early 1990s.

Prof Griffiths says this is because the cancer can take 30 to 40 years to develop, meaning men who worked with asbestos in the 1980s or early 1990s are now most at risk. Britain has the world’s worst rate of mesothelioma because asbestos was so widely used.

More than 2,600 people are diagnosed with mesothelioma each year in the UK. Most cases are diagnosed in those aged 60 to 80. Pictured: Stock image of asbestos

Once chemotherapy stops working, Prof Griffiths says patients are often given just months to live. But experts claim nivolumab could offer them hope.

The drug has been used to treat a variety of cancers since it was approved in 2015. These include melanoma, non-small-cell lung cancer and lymphoma.

It works by harnessing the body’s immune system, in contrast to chemotherapy which directly attacks the cancer cells.

One of the reasons mesothelioma is so difficult to treat is because the body’s immune system doesn’t normally recognise the cancer. Nivolumab helps immune cells called T-cells attack the mesothelioma.

While it cannot completely eradicate the disease, it can stop it spreading, giving patients extra months – and in some cases extra years – to live.

The patients on the trial were given either nivolumab or a placebo every fortnight via an intravenous drip for 12 months.

Comparing the two groups, those receiving nivolumab survived on average for nine months, compared with six months for those on the placebo.

What’s more, patients on nivolumab were less likely to see their cancer worsen over a three-month period.

According to Prof Griffiths, around 40 per cent of patients who were started on nivolumab in 2017 are still alive.

Carpenter David Smith, 61, was diagnosed with mesothelioma four years ago and was told he had between 12 and 18 months left to live.

‘It came out of the blue and was a real shock,’ said David, who went on to have chemotherapy.

‘That got me through the rest of that year, but things started to worsen again. That’s when I was told the prognosis had changed and I had between three and six months. It was a big shock.’

As a last resort, David, who lives in Aldingbourne, near Chichester in West Sussex, was placed on the nivolumab trial in 2018.

While David doesn’t know whether he was given the placebo or nivolumab, it is almost certain that he was given the real thing because scans showed his tumour had shrunk after just 12 weeks.

He finished the trial in December 2019 and says his condition stabilised for a while, adding: ‘I had a whole year where things had improved.’

Sadly, David’s tumour has begun growing again and he will need more chemotherapy, but he says the trial was a ‘lifeline’.

Prof Griffiths and his colleague Professor Dean Fennell, director of the Leicester Mesothelioma Research Programme, presented their findings to the World Conference on Lung Cancer yesterday, and their hope is that the NHS will consider adopting nivolumab as part of its nationwide mesothelioma treatment.

Prof Griffiths said: ‘We’ve created very good evidence that this is a good standard of care.

‘The hope is it could benefit thousands of patients.’

What are the best oil and gas industry stocks to buy in February?

What are the best oil and gas industry stocks to buy in February?