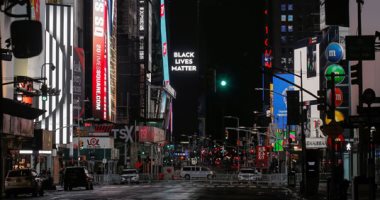 New York City authorities closed downtown Times Square today, Thursday, and only a small group of invitees, including health care workers and others from the front lines in dealing with the Corona virus epidemic, were allowed to follow the countdown to the New Year’s Eve ball drop in the square.

City Mayor Bill de Blasio said that everyone should stay home and watch the festivities in this square through television channels, while dozens of celebrations across the United States have been similarly curtailed or switched entirely online.

Usually tens of thousands fill the areas around Times Square, and stand for hours in the freezing cold to watch the New Year’s Eve celebrations, as they watch that crystal ball slowly descends in the last seconds of last year.

However, this year, the police will not allow only a few dozen to be present, with a commitment to wearing a muzzle and examining everyone to ensure that no one has a high temperature.

More than 25,000 New Yorkers died this year as a result of contracting Covid-19, while the city was struggling last spring to cope with the deadliest waves of the epidemic in the world.

Numbered Monster Hunter Games Are No Longer the Norm