Jacinda Ardern was once a bright-eyed young student nicknamed ‘Aunty Jack’ who dreamed of becoming a police officer like her father.

She would have to settle for Prime Minister of New Zealand instead.

She was shocked to discover her tattooed former woodwork teacher, Stuart King, was still working at the rural school, a two hour drive south of Auckland.

Ms Ardern also shared an old class photo, a tiny shy-looking girl in her school uniform – most likely at the age of 11 or 12. 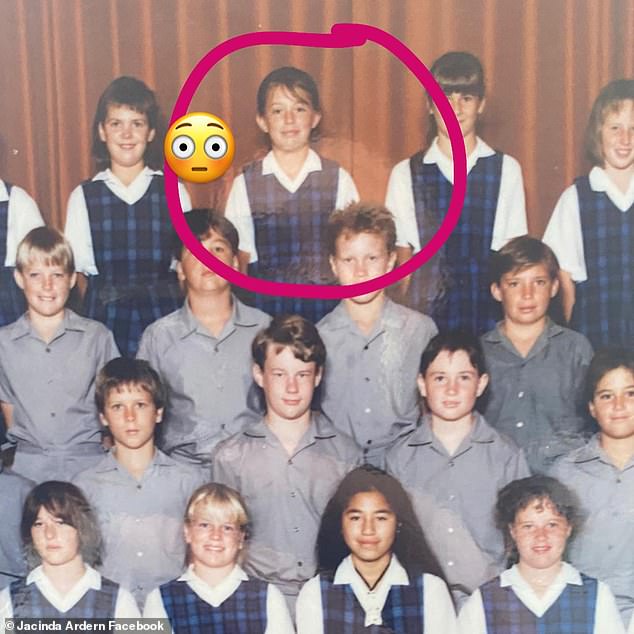 Jacinda Ardern ringed a photo of herself in this cut-out from her Morrinsville intermediate class photo, circa 1991 – so we didn’t have to guess 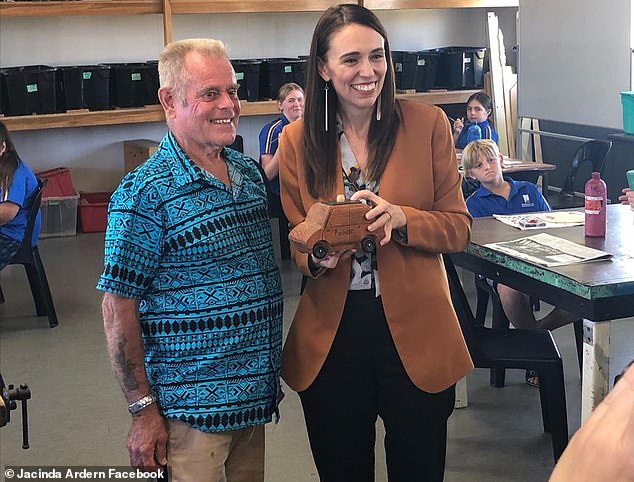 A for Ardern: The Kiwi Prime Minister presents her old woodwork teacher, Stuart King, with a wooden police car she made in his class way back when she attended Morrinsville Intermediate in the early 1990s

‘A particular treat was seeing Mr King – my old wood work teacher who is retiring after 46 years at the school,’ Ardern wrote on Facebook.

‘I posted a couple of stories about Mr King yesterday and it was so lovely to see how many people remembered him and his sayings (to this day I can hear him saying “pretty crunchy eh” when he was really excited.)’

Ardern said the jubilee was ‘a happy excuse to visit.’

‘I suspect by the end I bored everyone with my nostalgia.

‘Thanks for everything Mr King, and for being so kind about the old car I made in your class and brought back to show you.’

Ardern’s photos included her presenting a beaming Mr King with the wooden model of a police car.

According to the 2020 biography, Jacinda Ardern: A New Kind of Leader, Jacinda ‘developed a keen eye for unfairness’ at Morrinsville Intermediate.

In the biography, Madeleine Chapman wrote Ardern was motivated to ‘channel her energy’ over seeing poverty and unfairness into joining the Student Council at the school.

‘At meetings held in the staff room, young council members, aged between 11 and 13, aired their concerns about the inflating price of Juicies, the frozen drink snack, or their scepticism over safety concerns that prohibited them from riding their bikes the last 50 metres to school.’

‘The issues were presented seriously enough, but the earnestness of the young council members’ delivery masked the fact that most students applied to the council for one reason and one reason only: to get out of class for a period.’ 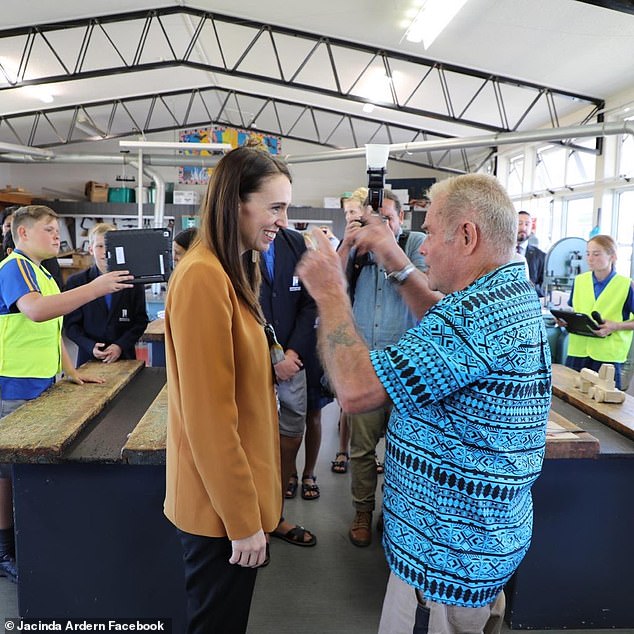 Stuart King and Jacinda Ardern catch up during her visit to her old school’s 50th jubilee. She recounted Mr King ‘pretty crunchy, eh?’ when he was excited 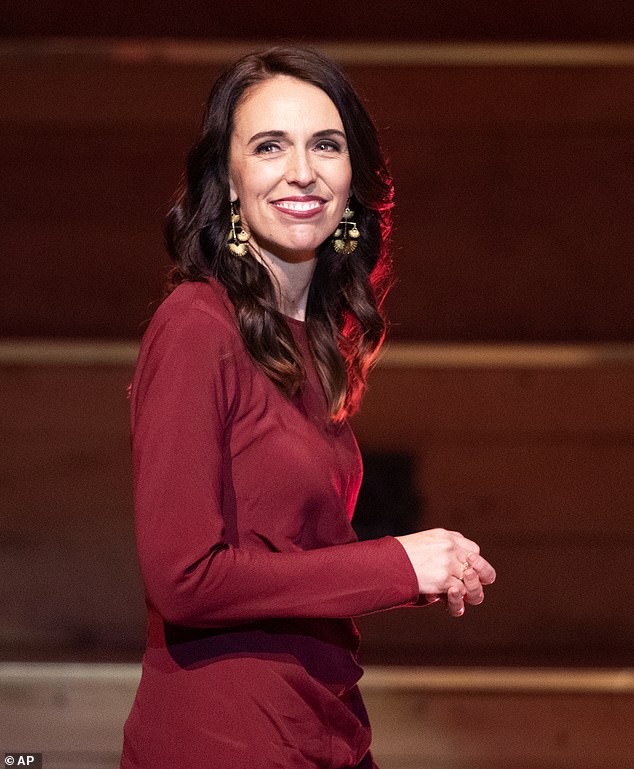 Long before she was one of the world’s most influential leaders, Jacinda Ardern was a precocious young kid with a passion for politics

When she was just 18, Ms Ardern was voted the student most likely to become Prime Minister by her peers.

Other categories include best-looking, friendliest, happiest, sportiest, funniest, loudest and most likely to succeed.

Ms Ardern told Herald Focus she was only voted that ‘because I was the only one who cared about politics at school’.

But it seems the precocious young woman made no secret of her desire to be leader.

In an interview with her local newspaper in 1997, a young Ms Ardern opened up about her goal to become New Zealand’s first female prime minister after being named as the winner of Waikato regional competition of United Nations of New Zealand speech contest.

In the interview she shared how her passion for public speaking could serve her well in politics. 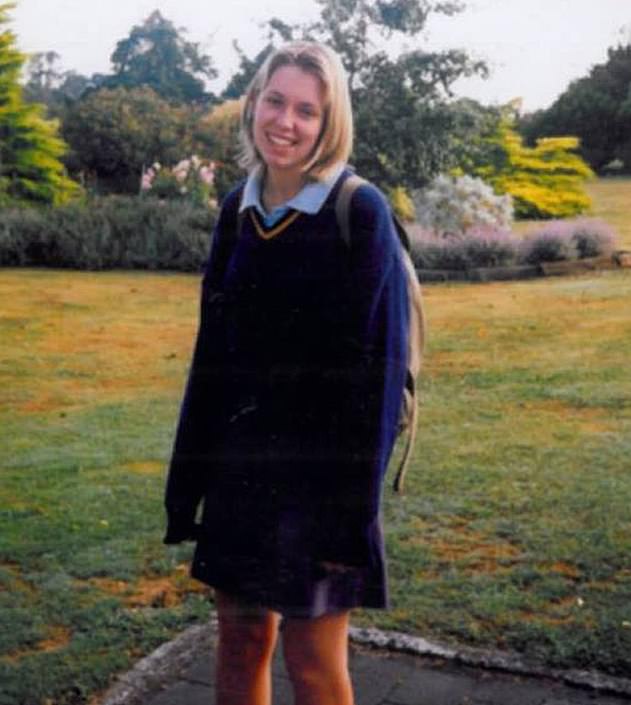 The New Zealand prime minister’s tale from humble beginnings to celebrated politician has been documented in a new biography , proving she has always been a voice of the people 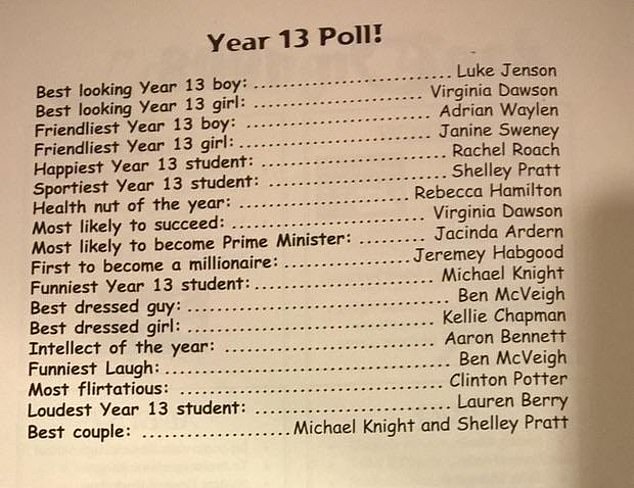 The focus of her speech was Drug Abuse: The Human Scrouge. Ms Adern argued that the UN needed to allocate more resources to combat drug addiction.

‘Mrs Malcon approached me about the competition about five days before. So the speech wasn’t as fully prepared as I wanted it to be,’ she said.

And while Ms Adern wasn’t able to achieve her dream of becoming New Zealand’s first female prime minister – that honour went to her mentor Helen Clark – she has broken several barriers during her time in office.

When she first took office in 2017, she became the world’s youngest female head of government at age 37.

She made history as one of only a handful of women who have given birth while in power.

Since then she has been praised for her handling of catastrophic events, including the Christchurch terror attack, the White Island volcano disaster and the coronavirus pandemic.

Growing up, Ms Ardern was a far cry from the no-nonsense leader she has grown to be.

Ms Ardern, who was raised Mormon, is the product of a police officer father and a mother who worked in the school cafeteria.

She grew up being encouraged to dress modestly and stay away from coffee, cigarettes and alcohol.

And while she may not have been a stand-out to her peers, her teachers had always taken note of her. She was known by school staff as someone who would go far.

After graduating from the University of Waikato with a Bachelor of Communication Studies in Public Relations and Political Science, she went on to work under then Prime Minister Helen Clark. 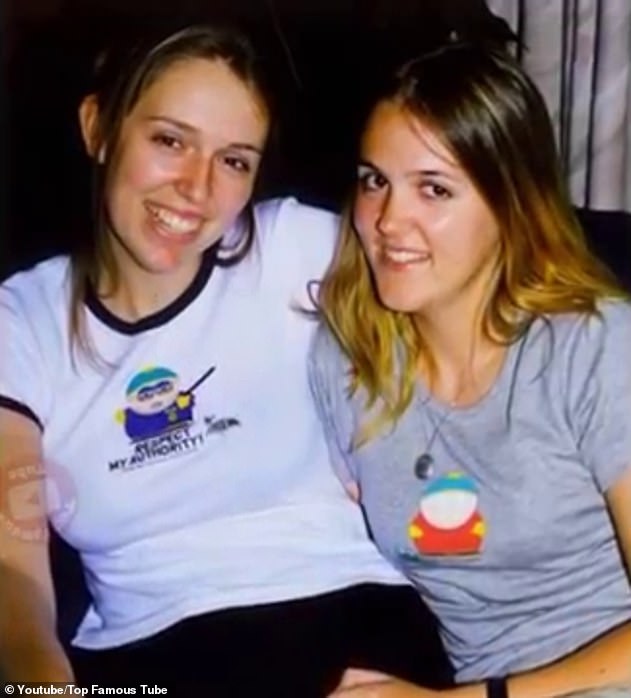 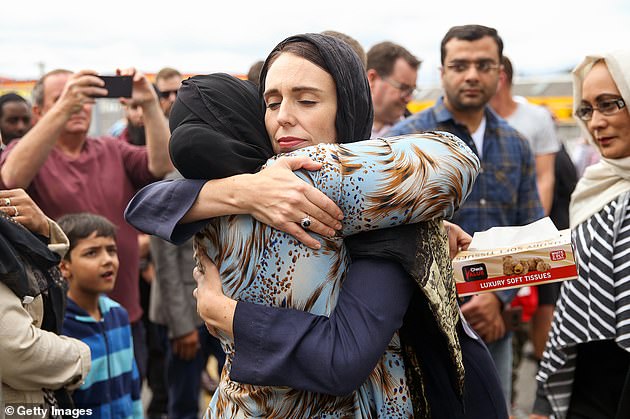 Ms Ardern was pictured donning a black head scarf as a sign of solidarity as she hugged the grieving relatives of the slain victims of the Christchurch Massacre on March 17, 2019

Critics have long compared Ms Ardern’s leadership style to that of the former Labour leader, who New Zealand’s fifth longest serving prime minister, and the second woman to hold the office.

Ms Ardern then moved to London where she worked as a senior policy advisor for British Prime Minister Tony Blair in the UK Cabinet Office.

Over the years she became known as an advocate for women, children, speaking often about New Zealand’s education system.

During this time the Labour party was struggling in the polls. John Key had served a the prime minister for two terms under National.

And the party was looking at an easy third term thanks to the inconsistency of leadership within the Labour Party.

Then leader Andrew Little was unpopular in the polls and there was talk of Jacinda Ardern stepping into the role.

But Ms Ardern was young, she had no desire to taken on the top spot.

Then in 2017, while on her way to becoming the MP for the Auckland electorate Mt Albert, she was elected as the new leader of the Labour Party.

She has become New Zealand‘s most popular prime minister in more than 100 years after leading the country through a series of crises.