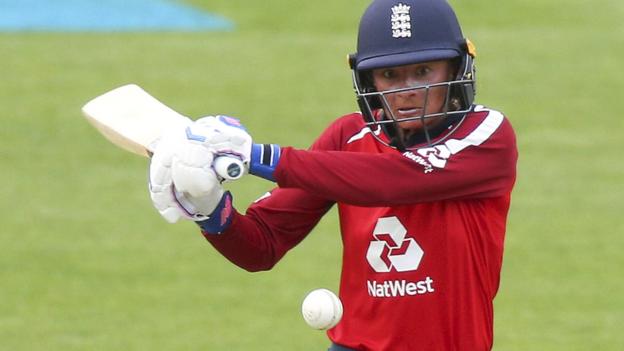 England thrashed New Zealand by seven wickets in the first Twenty20 of the three-match series in Wellington.

The tourists took regular wickets to dismiss the White Ferns for only 96 in the final over.

Danni Wyatt made 33 and Tammy Beaumont 25 for England, putting on 59 for the first wicket before captain Heather Knight was run out for a duck.

But Nat Sciver, who scored 26 not out, and Amy Jones guided England home with four overs to spare.

The final two matches of the series – which is being played behind closed doors because of coronavirus concerns – will also take place at Sky Stadium.

The second T20 on Friday has been moved from Auckland and the third from Mount Maunganui. All three are now double headers with New Zealand men’s T20s against Australia.

Sciver stars with ball and bat

Glenn then bowled Maddy Green to leave the hosts struggling on 61-6 in the 14th over.

Fast bowler Katherine Brunt returned to remove Thamsyn Newton and ended the resistance of Katey Martin, who hit 36 off 32 balls, as Jones completed her second stumping, before Jess Kerr was run out.

In reply, Beaumont continued her fine form with 25 off 31 balls, while Wyatt rediscovered her touch after scoring only 18 runs in the 2-1 one-day series win.

“I approach T20 completely differently. Heather told me to play with freedom and I thought the way to play was to be attacking and it came off,” said Wyatt.

“Over the last 12 months we’ve not had the starts we’ve wanted, so me and Tammy wanted to provide a good platform and I’m chuffed we did that.”

Both were caught off Leigh Kasperek and Jess Kerr ran out Knight with a direct hit shortly after, but England were already in a strong enough position on 67-3 in the 11th over.

Sciver ensured there was no further wobble as she and Jones shared an unbroken stand of 32 to seal victory.

We were completely outplayed,” said Devine. “England are an outstanding outfit with bat and ball, but we’ve been well under par.”