A drum thought to contain hydrochloric acid washed up on Newcastle Beach on Sunday forcing emergency closure – but was actually full of oil.

NSW Fire and Rescue crews were called just after midday when the large drum was found on the sand at Newcastle’s main city beach, 168km north of Sydney.

The busy beach was promptly closed, and people were ordered out of the water.

A 200m exclusion zone was set up and emergency services closed  Shortland Esplanade which provides access to Newcastle Beach. 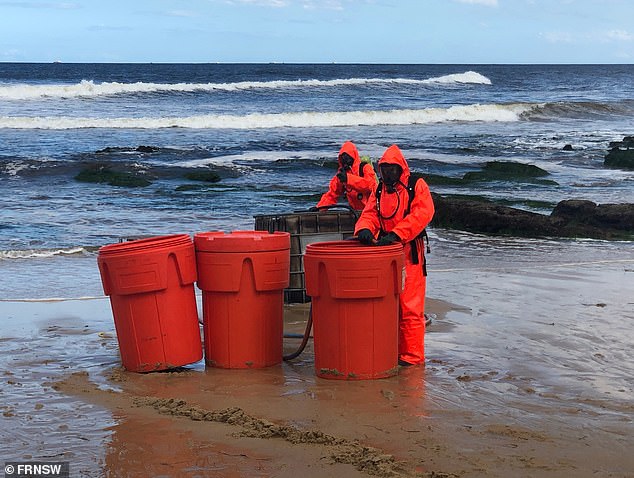 NSW Fire and Rescue hazardous materials team siphons  off the liquid from the 1000 litre drum marked for hydrochloric acid into the safe orange plastic bins. It turned out to be oil

Emergency services set up a 200m exclusion zone as hazardous materials crews opened the giant 1000 litre drum which was marked as having hydrochloric acid.

Once it was open, they discovered it was full of oil instead, the Newcastle Herald reported.

‘While the origin of the drum remains unknown, the area has now been made safe, and the beach has now been reopened to the public as of 3.30pm this afternoon,’ NSW Fire and Rescue wrote on their website.

NSW Fire and Rescue decanted the liquid into large orange barrels before removing it.

The 1000-litre drum still had markings on its side that indicated the contents were hydrochloric acid.

Hydrochloric acid is an industrial chemical often used to clean concrete and ‘pickle’ rusted steel before it is processed further such as by rolling or galvanising.

However the drum was full of oil instead, and as the lid was intact, emergency services do not think any of the liquid escaped into the sea. 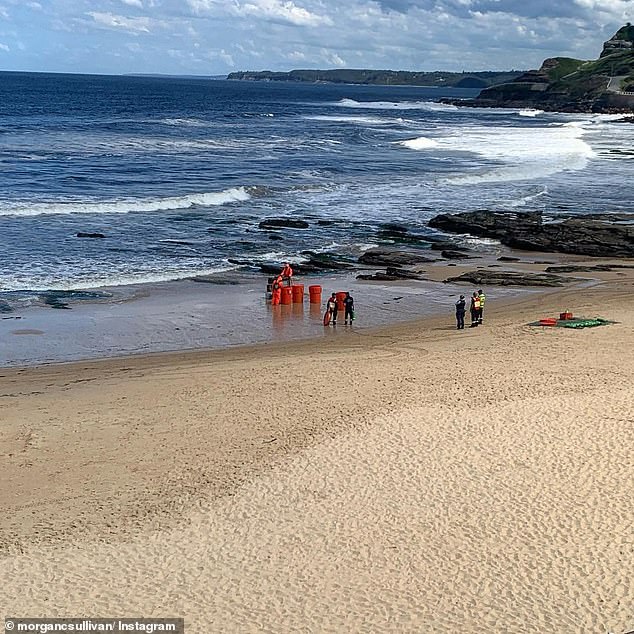 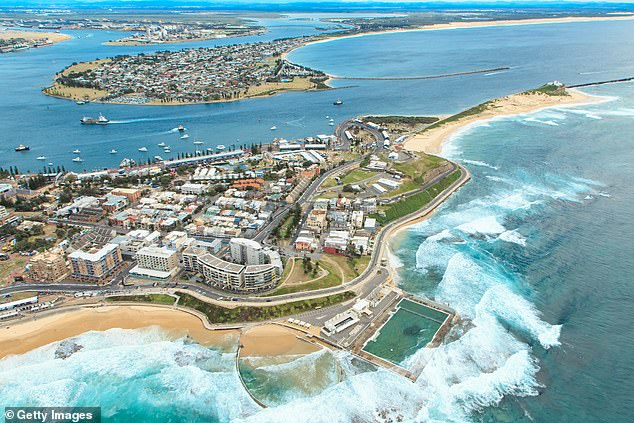 Busy Newcastle Beach seen from the air. The popular beach is the main beach for the city of Newcastle, 168km north of Sydney

Marine Rescue NSW warned boaties to stay out of waterways as recent floods have washed large amounts of debris down rivers and into the sea where they pose a hazard both floating and submerged.

‘Striking large debris will not only damage your boat but also risks throwing those on board into the water,’ Marine Rescue wrote on its Facebook page.

‘These are not safe conditions for boating. Please stay safe and give it a miss today.’