The Boat Race could have a new look this time next year, as plans to change the route to avoid the unsafe Hammersmith Bridge could see it run past London landmarks such as Big Ben with a million-strong crowd.

The 133-year-old west London bridge was suddenly closed in August last year after cracks were discovered in the structure.

The shut-down has caused major disruption to traffic in the area, with 16,000 people and 22,000 vehicles a day previously using the bridge to cross the River Thames.

It also put a stop to all boats, except emergency vessels, travelling underneath.

Being unable to pass under the bridge on the traditional route and concerns over the spread of coronavirus lead to the cancellation of the annual Oxford v Cambridge boat race last year. 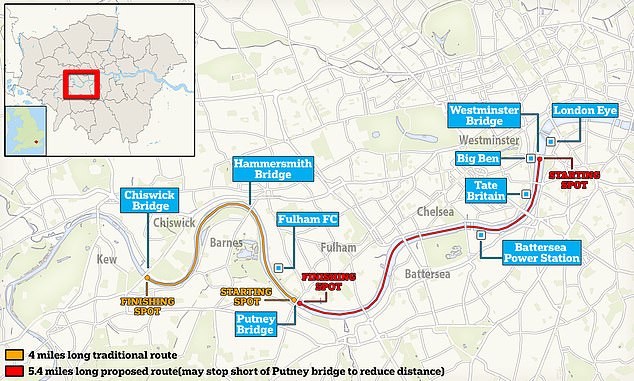 The new proposed route would see the racers row through central London, starting outside Big Ben and making their way down to Putney – the traditional starting point 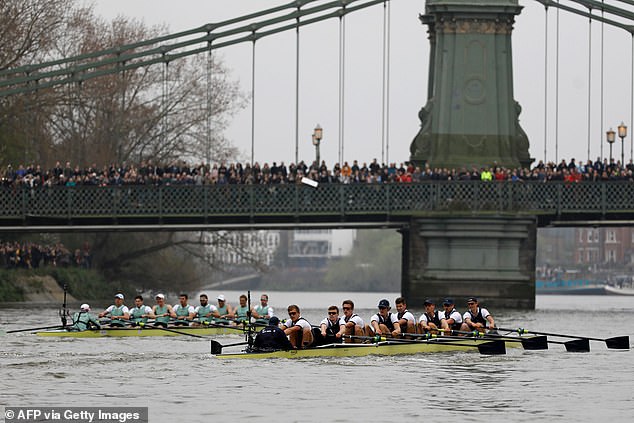 The race was cancelled last year due to coronavirus and the closure of the unsafe Hammersmith Bridge (pictured during the 2019 Boat Race) which boats, except emergency vessels, are not allowed to travel under 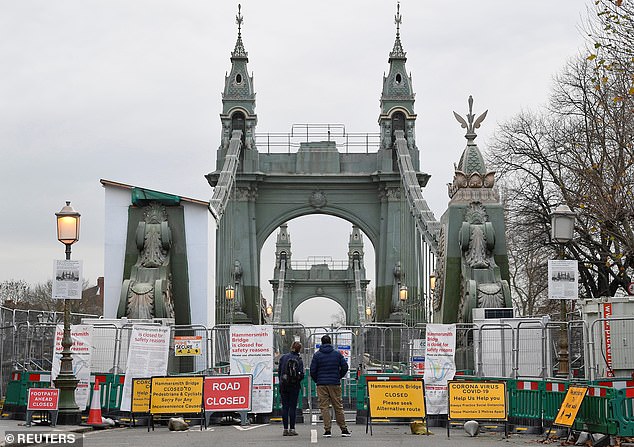 This year the crews are finally going head to head again but this time over the Great Ouse in Ely, Cambridgeshire – the second time in its history it has been relocated.

According to The Times, if given the go ahead, the new proposed route for the 2022 race would start in Westminster, beside Big Ben, the Houses of Parliament and with the backdrop of Westminster Bridge and the London Eye.

The rowers would then head west towards Battersea Park and power station, passing Tate Britain art gallery on route.

The route would finish up at Putney Bridge and would be 5.4miles long, compared to the traditional 4.2mile stretch from Putney to Mortlake.

If agreed, the new course could also allow millions of people to attend the race, as shown at the Queen’s diamond jubilee which a million people were able to attend along the Thames.

The Port of London Authority has been discussing the plans with Boat Race organisers to secure the future of the much-loved annual tradition.

PLA’s Ryan Hall said: ‘We are very hopeful that the boat races will return to the Thames next year, if not at Hammersmith then on an alternative course, possibly ending at Putney or further upriver. 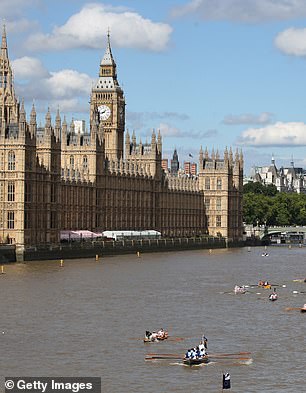 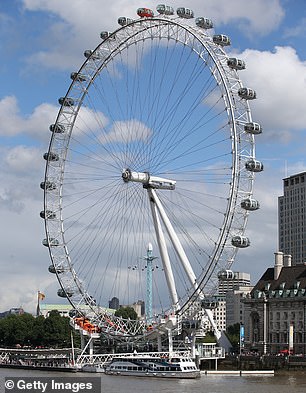 If approved, the new proposed route would see the competing rowers starting at Big Ben (left) and past a range of London landmarks including the London Eye (right) and Battersea power station 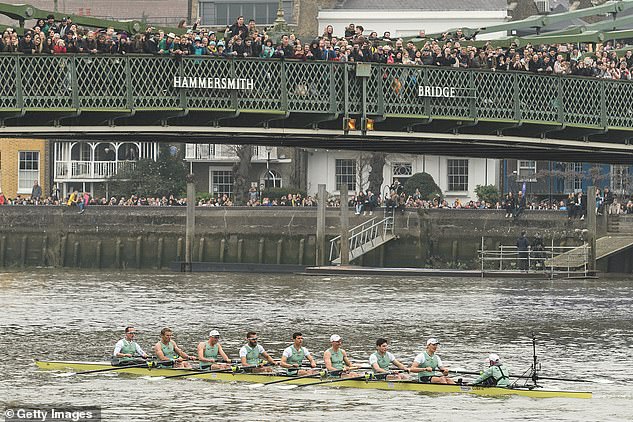 The move to Cambridge this year is said to have alleviated Covid fears from officials, with the River Thames event traditionally attracting thousands of spectators along the banks and on the bridges along the route

‘Initial discussions with the organisers are under way.

‘The week-long programme of events is an internationally important fixture in the Thames calendar and we are greatly looking forward to welcoming it back to the capital.’

‘We very much hope to return to the Tideway for the Boat Race 2022 but it is prudent for us to consider contingency plans should the issues with Hammersmith Bridge prevent us from using the historic championship course from Putney to Mortlake,’ a Boat Race spokesperson said.

Former Oxford student and Olympic rower Matthew Pinsent, who is now on the umpires’ panel for the race, told The Times that the rowers’ lack of knowledge about the proposed route through central London would make for an intriguing race.

Since the Hammersmith Bridge was closed in summer 2019, after cracks first appeared in its pedestals, the repair works have been the subject of much wrangling between the council, TfL and the Department for Transport.

A lack of financing has been a particular issue, with Mayor Sadiq Khan lobbying ministers to front the costs.

The Department for Transport says it ensured £4million of its bailout of TfL was ringfenced for the bridge’s repair works, which early estimates put as high as £140million.

It is estimated it will be closed for six years – even though it took the Victorians only half that time to build.

Hammersmith Council have said the restoration costs will spiral to ‘around £100million’.

Last month they proposed a £3 toll for motorists to drive across the bridge when traffic resumes from 2022.

TfL said that the replacement ferry service £1.55 cost is in line with bus fares and would also include a Hopper option to change transport mode for free.

Plans are for the restored bridge to have ‘double-decker’ structure, with an upper level carrying cars and buses, while pedestrians and cyclists would use the lower level, the council said. 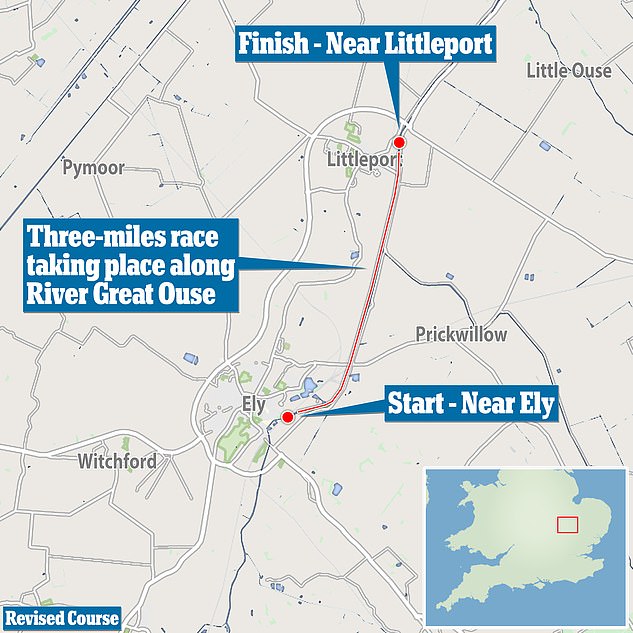 The full restoration would be completed in 2023. The Labour-run council also said ownership of the Grade II listed bridge could be transferred to a charitable trust.

Council leader Stephen Cowan said this month: ‘Hammersmith Bridge is one of the oldest suspension bridges in the world and the most expensive in Britain to repair.

‘While we’re working to fully restore the bridge as quickly as possible, we’re also determined to put in place the necessary governance and long-term funding arrangements that will make sure it is properly maintained well into the next century.

‘We are proposing a twin-track solution which reunites maintenance funding with transport use and puts the bridge into a charitable trust.’

Police were patrolling the banks of the River Great Ouse in Ely Cambridgeshire this morning ahead of today’s boat race. 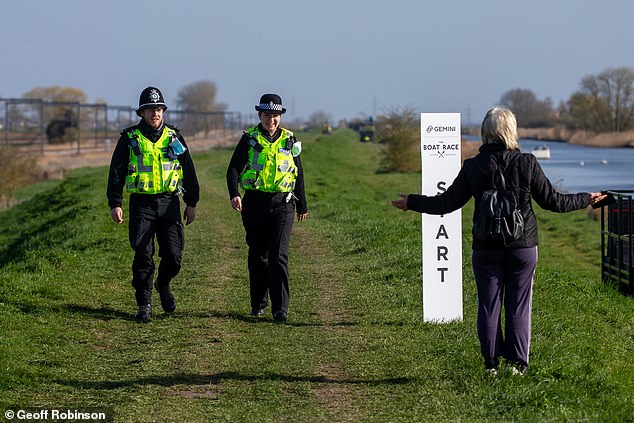 Police have warned people will be fined £200 for attempting to view the race from the riverbanks in Ely this weekend. Pictured: Police patrolling the river this morning 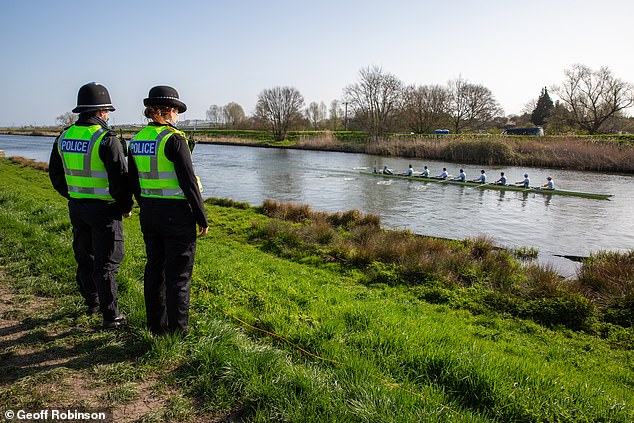 Due to coronavirus restrictions, the renowned race between rowers at Oxford and Cambridge Universities will be held behind closed doors this year. Pictured: Police patrol the riverbanks in Ely this morning 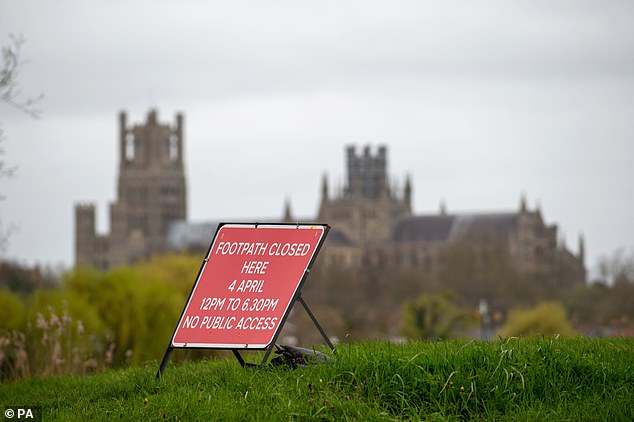 Notices and signs have been places on routes around the River Great Ouse, Cambridgeshire, warning people to keep away from footpaths along the river between 12pm and 6.30pm today

Spectators will be fined £200 if they watch the world-famous Boat Race from the riverside.

Notices have been put up on routes around the River Great Ouse, warning people to keep away from footpaths along the river between 12pm and 6.30pm today.

Due to coronavirus restrictions, the renowned race between rowers at Oxford and Cambridge Universities will be held behind closed doors this year.

A battle of brawn between the universities of brains: A history of the Oxford v Cambridge Boat Race

The race came about because two friends from Harrow School, Charles Wordsworth (nephew of the poet William Wordsworth), of Christ Church College, Oxford, and Charles Merivale of St. John’s, Cambridge, met during the vacation in Cambridge – where Wordsworth’s father was master of Trinity.

Wordsworth went rowing on the River Cam, and the two school fellows decided to set up a challenge.

There has only eve been one dead heat – in 1877 (pictured: A drawing of the race)

The race was held in Henley-on-Thames in Oxfordshire – and Oxford won.

A second race was held in London in 1836, won by Cambridge. But a row emerged over where future races should be held.

The race eventually settled in London and has been held annually since 1856, except this year, due to the Covid pandemic, and for the years 1915–1919, due to the First World War, and during most of the Second World War. 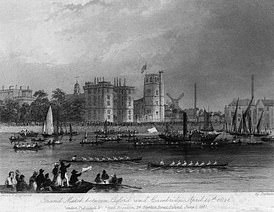 An engraving of the 1841 Boat Race

However the Boat Race was held on the River Ouse in 1944, the only time it has been held outside of London in its continuous history, due to fears over V1 rockets.

Surprisingly, it was Oxford who were victorious, by three quarters of a length.

Hammersmith Bridge has traditionally marked the end of the first third of the Boat Race and is seen as a key part.

The crew to pass the bridge in the lead will win the Boat Race four out of five times, history has shown.

Since 2018, the two events together are known as The Boat Race.

Currently Cambridge hold the most wins, with 84, while Oxford have 80 wins.

There has been one dead heat, recorded in 1877.

Meghan Markle will not return to the UK 'if she can help it', royal expert claims

Man, 35, is charged with murder after woman is found dead with 'significant injuries' in Berkshire

Rogozin: Turkey has all the ingredients to implement its space program