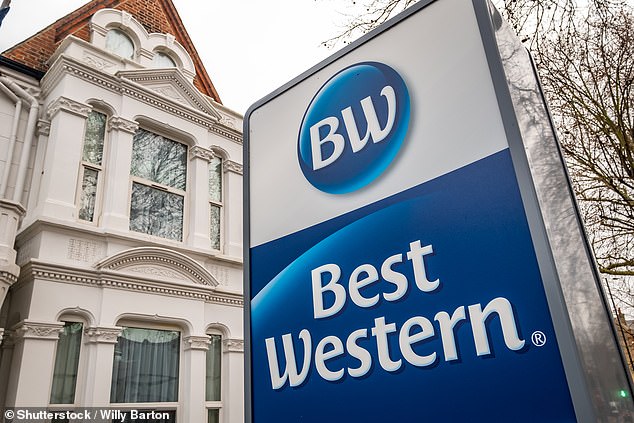 The NHS is planning to discharge Covid patients into care homes without a negative test for the virus, it was claimed today — despite the virus ripping through homes and sparking thousands of deaths during the first wave.

Documents say the patients won’t be swabbed but will need to have been isolating for 14 days and not be suffering symptoms of the virus. Care homes have already warned it would be a ‘grave mistake’ to use their empty beds as overflow for packed hospitals.

Patients suffering from the virus are already being transferred from King’s College hospital, London, to a nearby Best Western hotel in Croydon, The Guardian claims.

Health Secretary Matt Hancock today admitted No10 was looking at ‘all options’ to ease mounting pressure on the NHS, which is now treating 35,000 Covid patients — compared to 21,000 during the darkest spell of the first wave last spring.

‘There are huge pressures on the NHS and we are looking to all different ways that we can relieve those pressures,’ he told Sky News.

‘We would only ever do that if it was clinically the right thing for somebody. In some cases, people need sit-down care, they don’t actually need to be in a hospital bed.’

It comes amid fears hospitals could be overwhelmed by the surging admissions of Britons suffering from the virus, with health bosses warning the crisis won’t peak until February. It can take infected patients several weeks to become severely ill, meaning any fall in cases won’t be seen on NHS wards for at least a fortnight.

Care homes furiously warned last week it would be a ‘grave mistake’ to use their empty beds as overflow for packed hospitals.

The National Care Forum warned the homes are facing their own ‘phenomenal’ pressure and cannot cope with NHS patients too. It argued calls to protect the health service must not ignore the ‘massive potential impact’ on care homes.

Covid patients are already being moved to a Best Western-branded hotel in the Croydon area. There is no suggestion that it is the Best Western hotel pictured above

It comes amid fears hospitals could be overwhelmed. There were 35,000 Covid patients in Britain’s hospitals on January 10, up 21.5 per cent on the same time the week before 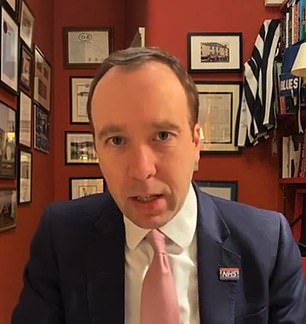 Uproar was sparked in the first wave after patients were discharged back to care homes to free up beds without a positive coronavirus test.

It was feared this triggered killer outbreaks, that led to thousands of deaths.

Ashgate Hospice, in Derbyshire, has already accepted a Covid patient from nearby Royal Chesterfield Hospital, it was revealed today.

The hospice said the patient is being isolated from the rest of the ward, and that they have faced no outbreaks of coronavirus since the pandemic started.

Patients discharged early to hotels will receive care from organisations including St John’s Ambulance and the British Red Cross, it is reported, alongside the armed forces medical personnel and NHS staff.

Families will also be expected to play a key role in monitoring and caring for their loved ones, according to reports.

The London Hotel Group, which owns the Best Western Chain, is reportedly in talks with 20 NHS Trusts about providing spare capacity. It says it can provide 5,000 beds.

The patients already being transferred to its hotel in the Croydon area are homeless, The Guardian says.

The Health Secretary said this morning proposals to use hotels were not ‘concrete’ but is ‘something that we look at as we look at all contingencies’.

Asked if the NHS could end up overwhelmed, he told BBC Breakfast: ‘We’re going to do everything we possibly can to give the NHS the support, the resources it needs.

He said sending some patients to hotels was a ‘further back-up plan’ only done if appropriate for the patient but ‘it’s not something we are actively putting in place’. He said it would be for ‘step-down’ patients only.

The news came after reports that the NHS is on ‘a knife-edge’ with hospitals close to the brink.

Medical students and receptionists will now be brought in to help cope with a huge surge in Covid-19 patients, say experts.

New figures show one in 20 patients are waiting more than 12 hours for beds – yet the worst of the crisis will not arrive until next month. Bosses say core staff face ‘unsustainable workloads’.

Volunteers and social care staff will be moved to hospitals to take up roles such as fetching equipment and food for patients.

New roles have been created to help fill the desperate shortage of staff. Secretaries and students will act as ‘medical ward scribes’ to write down clinical decisions, patient histories and times of treatment. 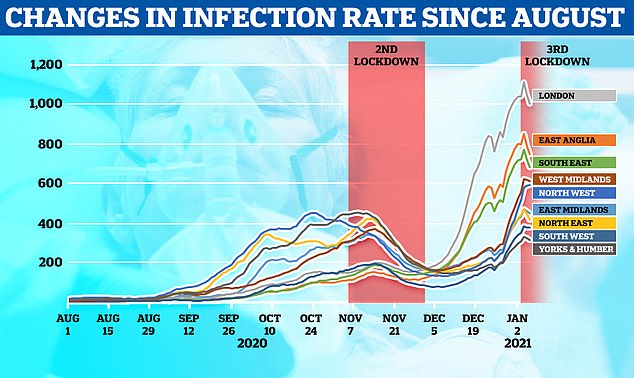 It comes as figures show Britain’s second wave of the pandemic may have peaked as lockdown was brought in, with the infection rate dipping for most areas since January 5

Students are also helping with tasks such as ‘proning’ patients – turning them on to their fronts.

Meanwhile the Royal College of Emergency Medicine says that in the week to January 3 more than 2,500 patients waited for longer than 12 hours to be admitted to a bed at 32 NHS trusts.

Dr Katherine Henderson, RCEM president, said: ‘It is a dire situation to be in. Our departments are crowded, with many places having no choice but to administer care in corridors.’

Jeremy Hunt, chairman of the Commons health committee and ex-health secretary, urged people to obey restrictions to cut infection rates. He told the BBC: ‘I think the NHS will in the end find intensive care, critical care, beds for all those who need it. But it is on an absolute knife-edge.’

Chris Hopson, chief executive of NHS Providers, said he expects pressure to spike in February. He warned a health and social care committee of MPs yesterday: ‘It is pretty clear the infection rate is not going to go down as quickly as it did in the first phase.’

The rapid rise in cases was now spreading to the East of England into the Midlands, the North West and South West, he added.

‘That’s a particular worry because trusts in the Midlands and the North have got significant numbers of patients still in hospital from the second surge.’