Nick Butter: The man who ran a marathon in every country in the world 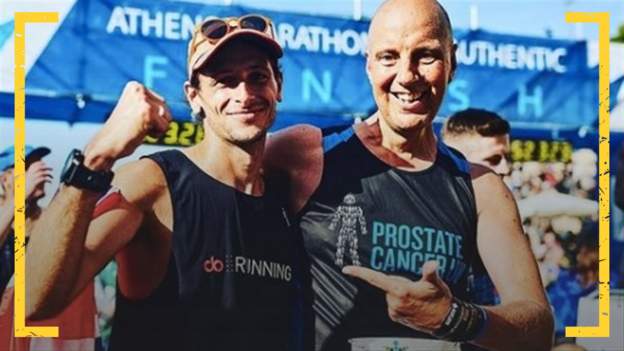 “All of a sudden, I had this horrendous pain in my shoulder and chest. You know what the tell-tale signs are, but when you feel it yourself, it’s very certain what’s going on.”

Nick Butter suffered a minor heart attack two miles from the finish line of a marathon on the Polynesian island of Samoa. This was the 182nd marathon of a trip in which, over the course of 674 days, he ran one in every country in the world. He’s the first person to achieve such a feat.

By this stage of the challenge, he’d already been shot at, mugged at gunpoint and attacked by dogs. It was one more obstacle to overcome. And the way it came about is quite typical of his habit of, well, taking a lot on.

Butter often had a taxi driver, motorcyclist or cyclist with him, who would provide help with navigation, water and safety. On this occasion, a man from his hotel, Sani, had volunteered.

Unfortunately, it turned out that Sani hadn’t ridden a bike for 20 years.

With eight miles left for Butter to run, Sani was in some pain and had to dismount. Rather than stop, or ask for help, Butter decided to run the rest of the marathon while pushing the bike and water himself.

“It was uphill, in 45C-plus heat, when I suddenly I had this pain,” Butter says.

Without anyone around and no phone signal, he took a break by the side of the road and waited it out. Eventually, Sani caught up and took the bike back so that Butter, determined to finish, could hobble through the last section.

Afterwards he spoke to doctors and family friends who worked as medics. They all confirmed the symptoms of a heart attack. That didn’t stop him flying to New Zealand to run another marathon just two days later. It’s also worth mentioning he has a family history of heart problems.

“The medical answer is that I should have slowed down after that, but the actual answer is that I didn’t,” says Butter. He completed 211 consecutive marathons around the world – 193 in member countries of the United Nations, plus 18 more for “future-proofing”.

It was in 2016 that a 26-year-old Butter had the idea. The goal was to raise money for Prostate Cancer UK.

Inspiration had come in the April of that year, when he was out in the Sahara Desert for the Marathon des Sables, which many describe as one of the world’s toughest events. Those competing run up to 156 miles, over six days, in temperatures above 50C.

He met someone who changed his life. Kevin Webber, then 51, was one of his tent-mates on the run. He revealed to Butter that he’d been diagnosed with terminal prostate cancer in 2014 and told he had potentially two years to live.

“There was this disconnect because he was incredibly happy and smiley about the whole thing,” says Butter. “It confused me for a while but then I realised why. It was because he fundamentally understood the value of life.”

After the race was complete, Butter got in touch with Webber and told him he wanted to do something to help raise money for prostate cancer research and treatment. He set a target of raising £250,000. He just didn’t yet know how he was going to do it.

“I wanted it to be big,” Butter says. “It had to involve running and travel and it had to invoke something that Kev had said to me, which was ‘don’t wait for a diagnosis’.”

A simple internet search for ‘has anyone ever run a marathon in every country?’ brought a negative answer.

“I couldn’t believe it,” he says. “We’ve put people on the moon! Of course, now I know why it’s not been done before – it’s very, very difficult.”

After telling his family and friends, Butter started planning.

“I registered with Guinness World Records, spoke with some adventurer and runner friends and then I started to understand that I needed to contact media outlets, embassies, running clubs around the world. Hotels, people to do my safety, people to do my visas, working out a route, understanding the weather conditions, what my body would need to go through.”

By the time he told Webber, Butter had a lot of things in place. He says Webber reacted in much the same way as his family – he was encouraging, but not convinced it would be feasible.

Butter was serious, though. The planning took two years. Even then, he underestimated what was coming next.

On 7 January 2018, Butter was finally on the start line, in Toronto, Canada.

Day one had not started well. Halfway to Gatwick, news broke of a collision between two planes on the runway at his destination airport in Toronto. When they finally did arrive, it was -25C, 20 degrees colder than expected.

What’s more, Butter didn’t feel physically ready. With all of the work that went into planning, he had actually neglected to prepare his body.

“I was running in Canada and I realised I hadn’t actually done any training for about six months,” he says. He had done 450 marathons and nearly 100 ultra marathons before the trip. But the scale of what he had taken on would soon hit home.

“I had 22 different bouts of food poisoning, which meant several weeks and months having horrendous illness. I was peeing blood at times because of dehydration.

“During the first couple of weeks of Africa I lost 12kg.”

Rest was another major issue, especially in areas with unreliable flights and long lay-overs. But that was nothing compared to several moments of real danger.

“I was mugged at knife and gunpoint by a group of attackers in Lagos, Nigeria,” Butter says. That incident left him with fractured ribs from being kicked.

“I was hit by a car in central Africa while I was running and broke some bones in my elbow. I was attacked by dogs in Tunisia and had to get a rabies jab, which meant flying back to the UK, because the place I was about to fly to didn’t have the vaccine.”

He and his team were also shot at in Guinea-Bissau.

“We were due to go on a night crossing on a rickety old boat. A rebel force made a move on a border post where we were parked overnight,” Butter says.

“I was sleeping in the back of the taxi and we heard gunfire and rattling on the metal canisters and porta-cabins nearby. We realised these gunshots were aimed our way.”

Having survived all of this, with 12 days of the journey left, a border check on the passage between Oman and Yemen almost tripped him up, with the finishing line in sight.

“We had this horrible situation where it turned out that the driver I’d hired was smuggling counterfeit goods and drugs into the country, using me as a mule effectively,” Butter says.

“I was stuck in the passenger seat, none the wiser, until the border police dragged us into a van.

“There were lots of men with AK47s and lots of shouting. Eventually, the driver handed everything over and we were let out.”

Of course, it wasn’t all just one big ordeal. There were some beautiful moments too.

“On the coast of South Africa I saw these beautiful humpbacks reaching out of the water. I had a very close encounter with a cheetah in Namibia. I ran around an erupting volcano in Guatemala in a city called Antigua. I dangled my legs over the lip of a volcano in Nicaragua and watched the lava bubble several feet below.

“In Liberia, I ran through this gorgeous forest which was absolutely swarming with frogs. All you could hear for miles and miles was these frogs. You don’t imagine that when you’re in the planning stages.”

He also met a lot of different people – from families who put him up to presidents and prime ministers.

“I was sat next to a guy in a hotel in DR Congo, without realising he was the president of Zambia,” Butter says, adding, “The president of Slovenia happened to be a very good runner and met me and had some lunch with me.”

Then there were countless others around the world who showed exceptional kindness – hosting him, feeding him and ferrying him around.

And, of course, the big purpose for the whole trip was to raise money. Did he meet his original fundraising target of £250,000?

At the time of interview, Butter said the JustGiving page that he had set up was at £120,000, but, from outside donations, he believed the team had raised over £200,000, with the number still rising.

He says that beyond raising money, the goal was to spread awareness.

“I did something like 140 live TV appearances in different countries,” Butter says. There were personal testimonies too.

“We had people come to us who previously hadn’t any idea of prostate cancer, but, after speaking to us, got tested and discovered that they had it. Because they caught it early, they were fine.”

Since finishing the trip, he has been doing speaking tours (lockdowns permitting), using his story to help educate. He’s also published a book, Running The World.

Butter, writing in the closing chapter about his final leg of the 196-marathon trip, which began in Marathon, Greece, describes Webber turning up to run with him.

Five years on from Webber’s terminal prostate cancer diagnosis, in which he was given an estimated two years to live, he and Butter crossed the finish line in Athens hand-in-hand.

The pair still talk regularly, and Butter says his friend is still running and still smiling.

Mauritania, Senegal, Mali and The Gambia consult to combat immigration

Mauritania, Senegal, Mali and The Gambia consult to combat immigration