Downing Street has slapped down Nicola Sturgeon after she said she does not believe Boris Johnson would block a second Scottish independence referendum.

The SNP leader claimed the Prime Minister will have to cave in and allow a fresh vote on breaking up the UK if she secures a majority in next month’s Holyrood elections.

But Number 10 said at lunchtime that ministers and officials ‘across all of the UK’ should be ‘focused on tackling the Covid-19 pandemic’.

The Prime Minister’s Official Spokesman said calling for a referendum during the coronavirus crisis ‘is not right’ as he restated Mr Johnson’s previous remarks that the 2014 vote was a ‘once in a generation event’.

It came as Ms Sturgeon admitted that she is concerned that ‘daft rhetoric’ and threats of street protests from Alex Salmond could turn off moderate voters.

Mr Johnson has repeatedly rejected calls for another referendum but there are worries among ministers that the PM will not be able to hold the line if the SNP records a huge win on May 6.

Ms Sturgeon told the Guardian Mr Johnson had ‘moved away from a hard ‘we can stop a referendum’ to saying ‘when would it happen, and on what basis would it happen?’

‘If people in Scotland vote for a party saying, ‘when the time is right, there should be an independence referendum’, you cannot stand in the way of that, and I don’t think that is what will happen,’ she said. 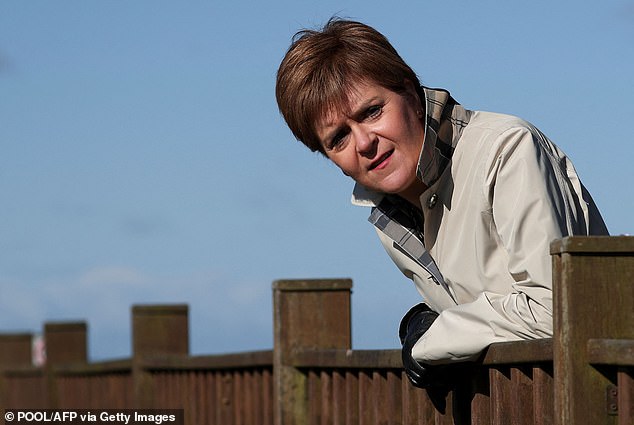 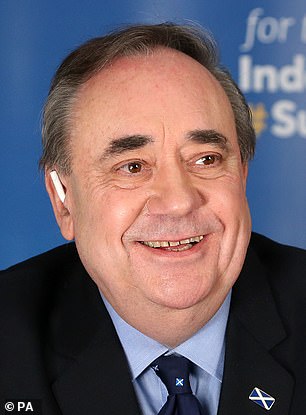 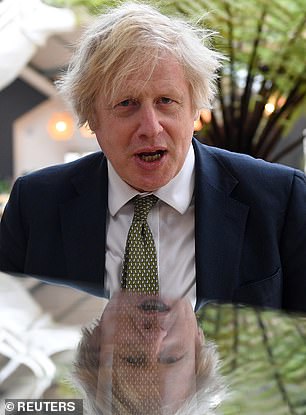 As well as swiping at Mr Johnson (right), Ms Sturgeon also admitted she is concerned that ‘daft rhetoric’ and threats of street protests from Alex Salmond (left) could turn off moderate voters

But the PM’s Official Spokesman hit back and said: ‘I think the first thing to say is that ministers and officials across all of the UK, all UK government departments, are focused on tackling the Covid-19 pandemic.

‘I think that is what the public wants to see. Scottish people have been clear they want to see the UK government and devolved administrations working together to defeat this pandemic.

‘So calling for a referendum in this way in the middle of a pandemic is not right and I think you have got the words from the Prime Minister that the 2014 vote was a once in a generation event.

‘This is a point he has reiterated probably most forcefully at the Liaison Committee at the end of last month.’

Ms Sturgeon had said she is ‘pretty confident’ the SNP’s plan B of pushing a referendum Bill through the Scottish Parliament – potentially triggering a wildcat vote with no legal standing – will not be needed.

The First Minister said her ‘strong preference and intention’ is to hold another referendum in the first half of the parliament, up to 2023, but she will be ‘guided by the realities of Covid’.

She also swiped at Mr Salmond – who has launched the Alba Party after an extraordinary SNP civil war – for suggesting peaceful street protests could be a way of forcing Mr Johnson to agree to a referendum.

‘If you’re somebody that voted no in 2014 and … because of Brexit or other things, are now open-minded to independence – and I know an awful lot of these people – and you hear somebody say they think they can bulldoze their way to independence in spite of public opinion, I would think, ”maybe I don’t want to engage in this any more”,’ she said.

A poll revealed yesterday that fewer than one in five Scots believes that independence is one of the most important issues facing the country.

It found only 19 per cent of people believe separation is an important issue – down from a high of 23 per cent in a series of recent surveys.

In the Savanta ComRes poll carried out for Scotland on Sunday, respondents were asked to pick their three ‘most important issues facing Scotland’ – with half stating the economy was one of the key topics.

Health was the second most-selected option, chosen by 45 per cent of Scots, followed by employment and welfare at 35 per cent.

Education was an important issue for 31 per cent of people, followed by Brexit on 25 per cent and then independence.

According to the poll findings, independence as a key issue was at the lowest level recorded in the newspaper’s series of polls. It also found support for and opposition to independence was split 50-50.

It came after Scotland’s political parties suspended their election campaigns as a mark of respect following the death of Prince Philip on Friday.

The survey of 1,007 over-16s in Scotland also suggests an SNP majority or an SNP/Green coalition would have the most backing among nationalists as the ‘best mandate’ for a second independence referendum, rather than involvement from Alex Salmond’s new Alba Party. 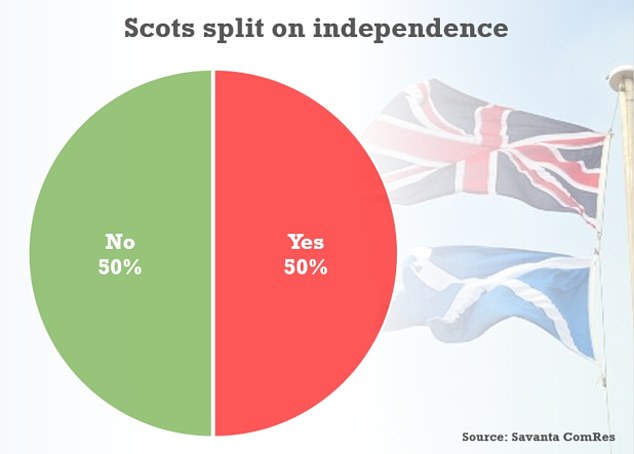 Examining recent opinion polls, political scientist Professor Sir John Curtice suggested the fallout from the inquiry into the Scottish Government’s unlawful investigation of Mr Salmond appears to have had no impact on the SNP’s constituency support.

Meanwhile, backing for independence has fallen by 1 per cent on average since the winter. But Sir John added there is ‘no more than mixed evidence’ that the saga surrounding Mr Salmond and Miss Sturgeon has affected her approval ratings.

On the What Scotland Thinks website, Sir John wrote: ‘It looks as though not only were the opposition’s hopes of bringing the First Minister down over the Salmond affair not realised, but also the row has done little if any damage to the popularity of the nationalist movement or that of its principal spokesperson.

‘It is perhaps not surprising that an issue that some thought might dominate the election campaign now seems to have fallen off the political agenda entirely.’

Sir John added that early polls for Mr Salmond’s return to frontline politics ‘have not been encouraging’.

He wrote: ‘Even if he does manage to secure election to Holyrood, the former First Minister is at risk of finding himself a lone figure in the new chamber.’

Disneyland ticket prices, tiers: What you need to know to book your next adventure