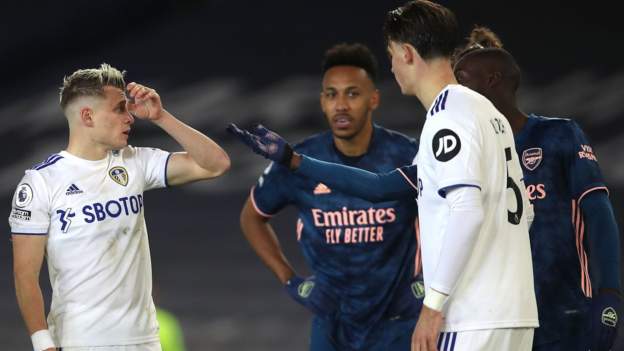 Arsenal and Leeds have both condemned the “vile” abuse directed at Nicolas Pepe and Ezgjan Alioski after Sunday’s Premier League game at Elland Road.

Pepe was sent off after 52 minutes of the 0-0 draw when he put his head into Alioski’s face following a number of niggly exchanges between the pair in the preceding minutes.

However, Alioski’s reaction annoyed the Arsenal players and Scotland defender Kieran Tierney had to be pulled away from the Leeds man after the final whistle as he made his feelings known.

Pepe and Alioski were both targeted on social media, leading the clubs to release co-ordinated statements, in which they promised to work with the police and football authorities to identify those responsible.

“We utterly condemn the vile abuse directed at Nicolas Pepe and Ezgjan Alioski on social media,” said Arsenal in their statement. “This is completely unacceptable.”

Leeds also called the abuse “vile” and said it would “not be tolerated”.

Pepe, who has struggled to impress since his £72m move to Arsenal from Lille in August 2019, is facing a three-match ban, which would rule him out of the north London derby at Tottenham on 5 December, in addition to home games against Wolves and Burnley.

Traveling to a state in the Northeast for Thanksgiving? Know these COVID-19 restrictions