Nigella Lawson has given the Tory MP who suggested the Prime Minister had been ‘ambushed by cake’ short shrift on social media, after he responded to her joke that the bizarre phrase might inspire the title of a future cook book.

Yesterday Bournemouth West MP Mr Burns’ comments sparked widespread ridicule online when he defended the Prime Minister over an alleged birthday party – with a Union Jack cake and singing – in the Cabinet Room on June 19th, 2020.

The Northern Ireland minister said Mr Johnson was working in the room before people came in and presented him with the baked treat, adding: ‘He, as far as I can see, he was in a sense, ambushed with a cake.’ 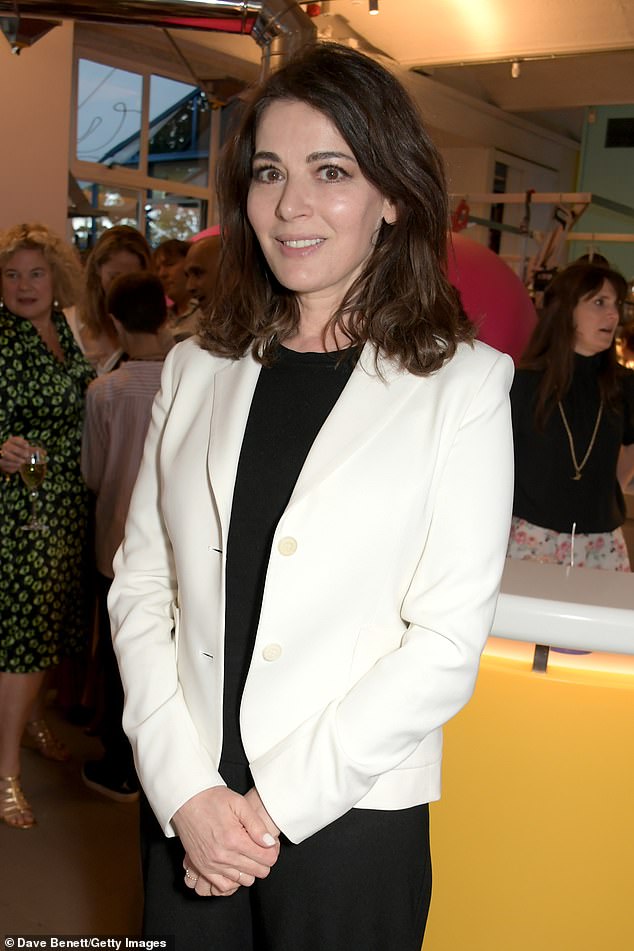 Yesterday Conor Burns, MP for Bournemouth West, defended the Prime Minister after it was revealed he attended a gathering, complete with a Union Jack cake and singing, that was organised by his wife Carrie in the Cabinet Room on June 19, 2020 – he later responded to Ms Lawson’s tweet saying she was welcome to use the phrase for a future book 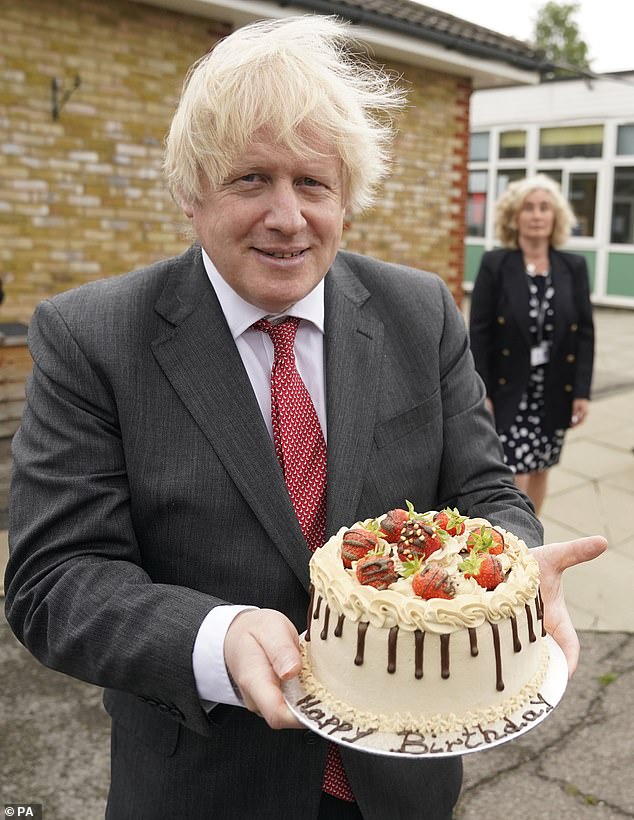 Boris Johnson holding a birthday cake presented to him by staff during a socially distanced visit to Bovingdon Primary School on June 19, 2020 – the same day as the birthday bash

On Twitter, Nigella found her name trending on Tuesday evening after the popular television cook suggested the phrase ‘just has to be the title of my next book!’

Mr Burns responded an hour later to Ms Lawson, saying: ‘It’s yours if you want it! Could I include my Granny’s Christmas cake recipe?’

He was given short shrift by the domestic goddess…who riposted: ‘This is too meta. Plus, you think it’s a joke? Says it all.’

Social media had earlier erupted with #ambushedbycake hashtags poking fun at the remark, with one picturing a Colin the Caterpillar cake alongside the caption: ‘Eyes of a killer.’

Another tweet photoshopped an advert of an injury lawyer holding a cake, asking: ‘Have you had an accident or been ambushed by cake in your place of work?’

And a third meme capturing a megaphone being stuck out of a police car towards a passerby was accompanied by the words: ‘I’d be careful, Madam. There are reports of people being ambushed by cake.’ 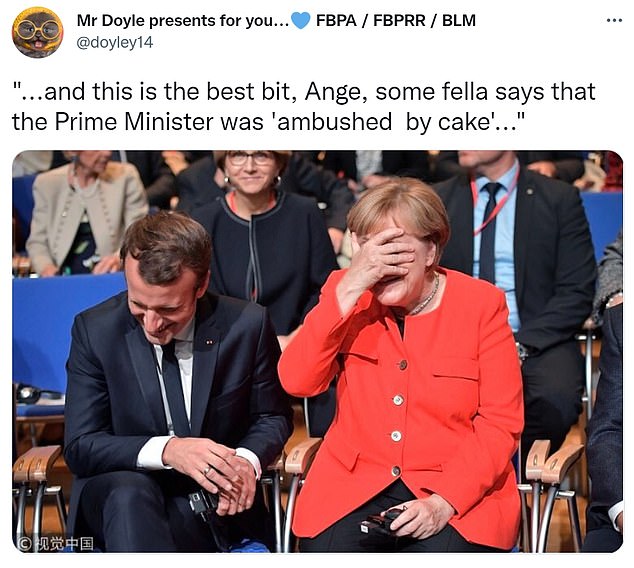 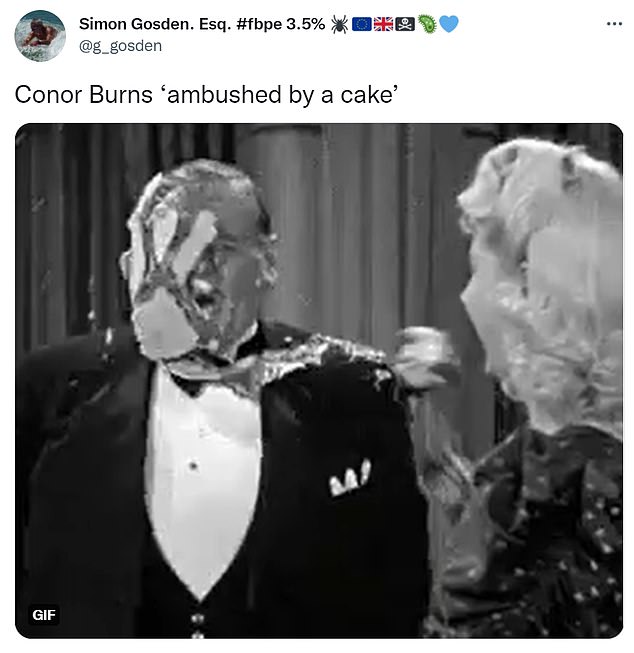 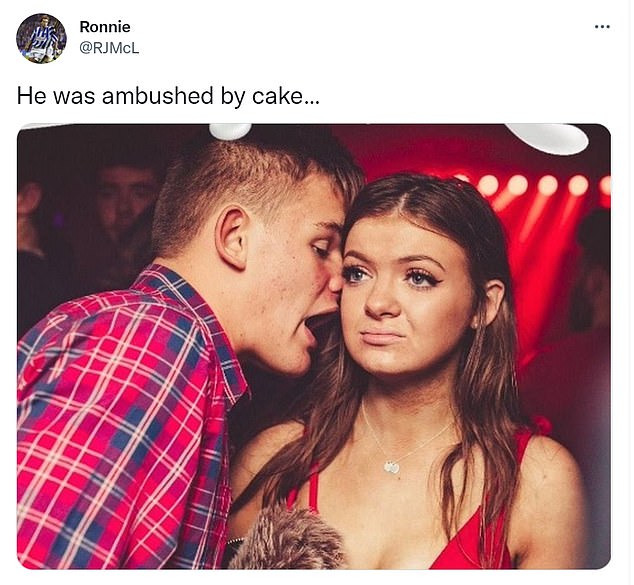 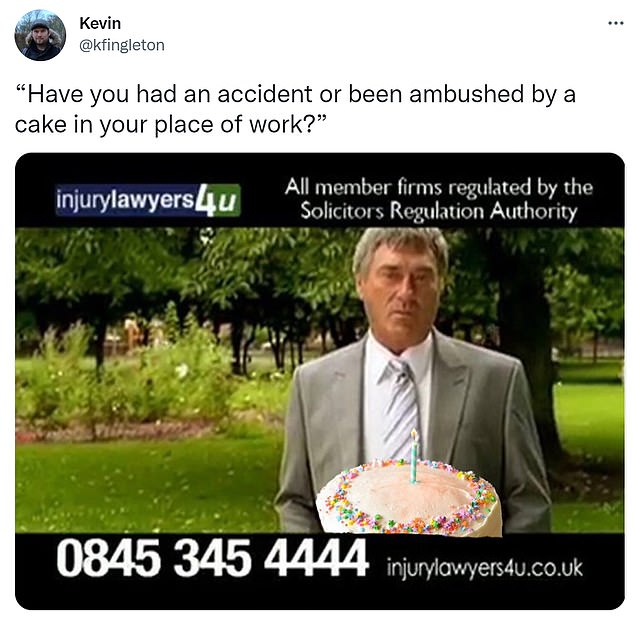 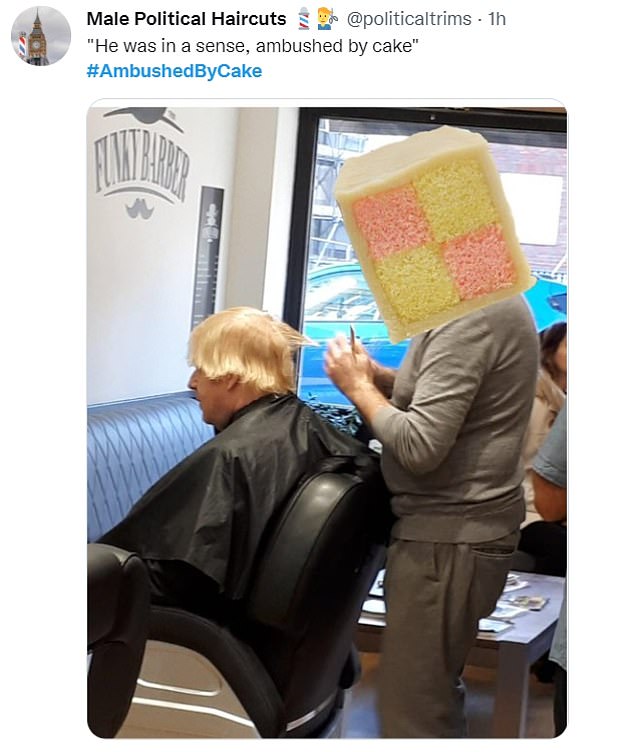 They insisted that the gathering of around 30 people specifically to mark the PM’s 56th birthday in June 2020 could be seen as a extension of the workplace.

Mr Burns told Channel 4 News on Tuesday evening: ‘You can characterise these things in different ways. My understanding of that, from what I know of it, and I know as much as you do or your viewers at home know, the Prime Minister was out on a visit.

‘He came back, he was working in the Cabinet Room. People came in and presented him with the cake on his birthday, they sang happy birthday. He was there for about 10 minutes. 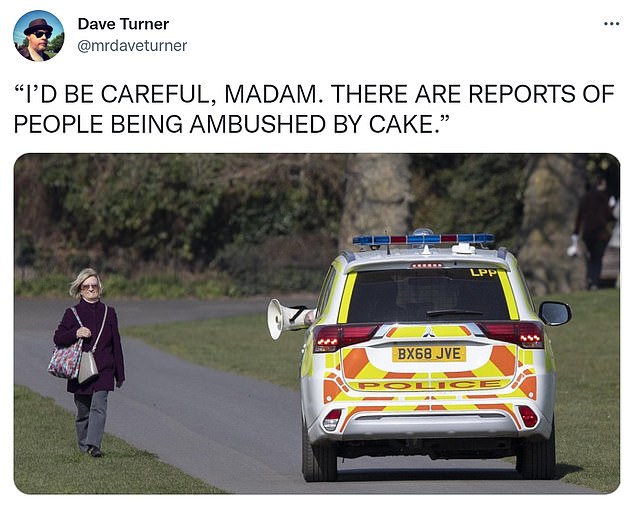 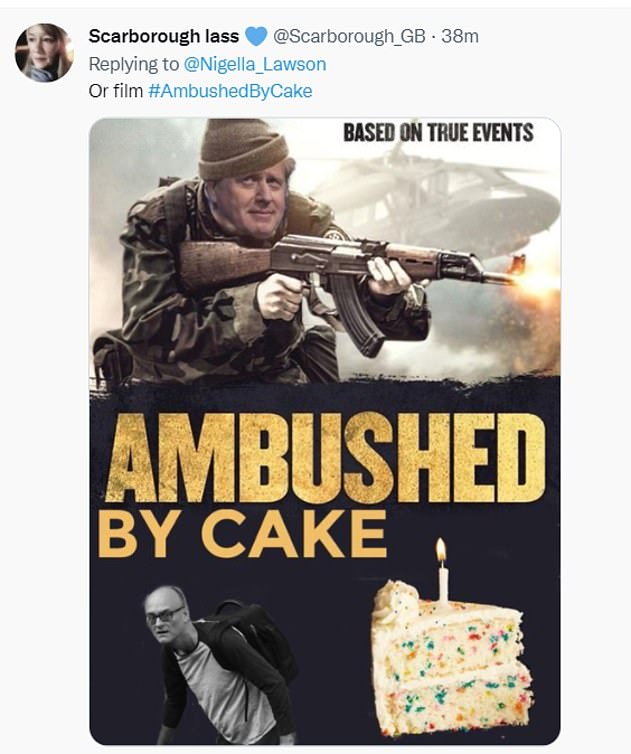 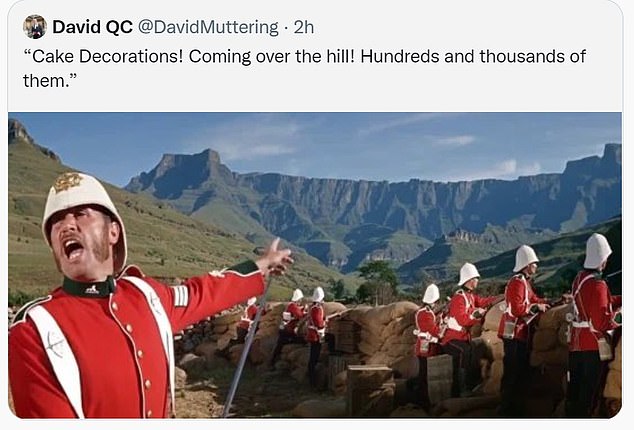 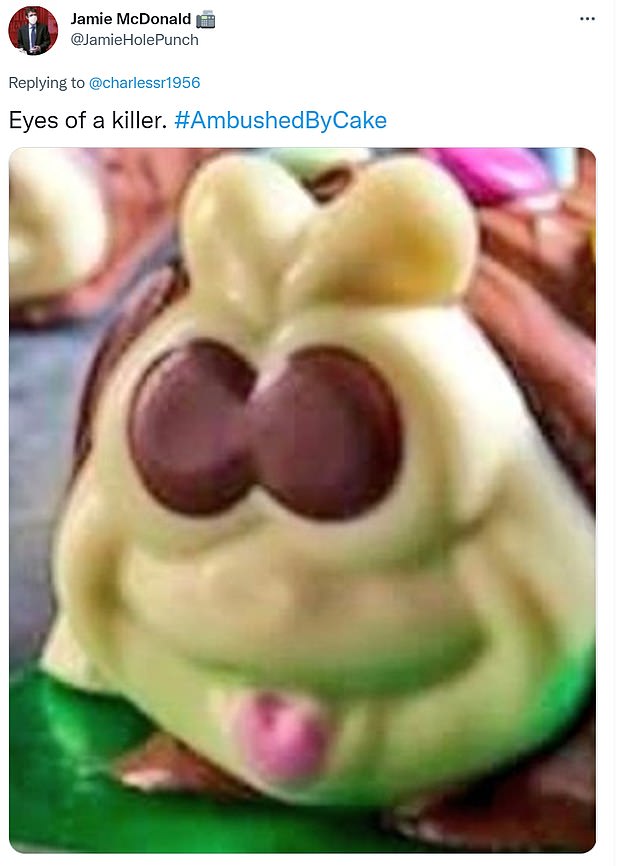 ‘It was not a premeditated, organised party in that sense, that the Prime Minister himself decided to have sent out.

‘He, as far as I can see, he was in a sense, ambushed with a cake. They came to his office with a cake, they sang happy birthday, he was there for 10 minutes.

Questioned over whether his defence of the PM was ‘farcical’, the MP for Bournemouth West said: ‘He’s our leader, I support him. I want him to continue as Prime Minister.

‘I want him to show the British people what we can do in government to make their lives and their communities better.

‘Of course, we want to draw a line under this, and that’s why we want the Sue Gray report to come forward as soon as she is ready.

‘We want the Met to get on with looking at whatever they’re looking at, and then to make their findings public and then the public ultimately will judge.’ 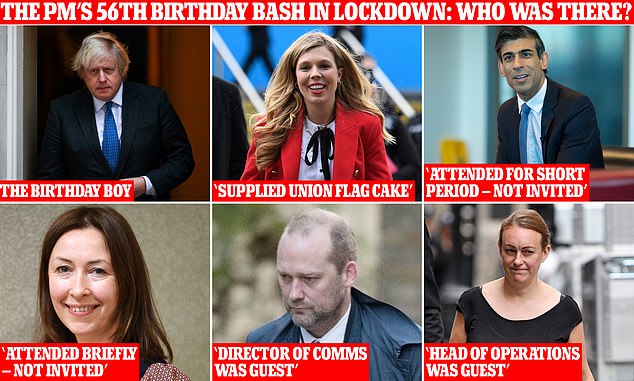 How (and when) WILL Sue Gray’s Partygate report be published?

Sue Gray’s long-awaited report is imminent – but there are still questions about the process for it being released.

The first stage is for the top civil servant to hand the report over to the PM.

That has yet to happen, with final legal checks and proofreading thought to be the hold-up.

At that point Boris Johnson will get to read the document – although it is thought he will not be permitted to see evidence such as WhatsApps and emails that might put staff in a difficult position.

Mr Johnson has control of the timing of publication, although he will want it out as soon as possible.

He will need to decide on his response and write a statement.

No10 will need to get approval from Speaker Lindsay Hoyle for an emergency statement to Parliament, which is likely to happen several hours after the publication to avoid accusations of dodging scrutiny.

Downing Street has indicated that the report will be published in the form that Mr Johnson himself sees it.

this stock down 67% is still NOT a buy

this stock down 67% is still NOT a buy