Two more teenagers have lost their lives in separate stabbings on another bloody night of violence on London‘s streets.

A 15-year-old boy was stabbed to death in Woolwich, southeast London just after 5pm on Monday in the latest horrific attack.

Hours later, a 16-year-old boy died just before midnight after being stabbed in Vauxhall, south London.

The total number of teenagers murdered in the capital this year now stands at 21, with three dying in the last five days.

In the whole of last year, 17 teenagers lost their lives. 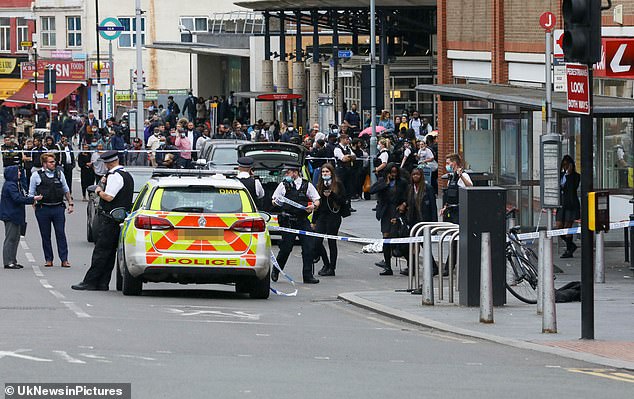 WOOLWICH: Emergency services set up a cordon at the scene after a teenage boy was stabbed to death in a horrific broad daylight attack in south east London yesterday afternoon 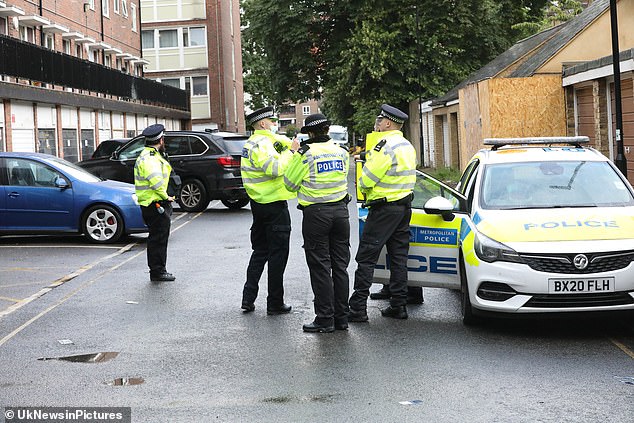 LAMBETH: Medics rushed to the scene after reports a 16-year-old boy had been stabbed but he was pronounced dead at the scene in Oval Place. Pictured: police on scene this morning

The 15-year-old was killed in front of horrified onlookers in the daylight attack yesterday.

Pictures from the scene showed a large police cordon with multiple police and ambulance vehicles and it is understood the air ambulance was also called to the scene.

Images from the scene also appeared to show members of the public holding up sheets to cover the victim from view as paramedics desperately tried to save his life but, despite their best efforts, he was pronounced dead at the scene.

A 15-year-old was arrested on suspicion of the Woolwich murder after presenting at a south London hospital with a non life-threatening stab wound.

‘Police were called at 5.23pm on Monday to reports of a stabbing. 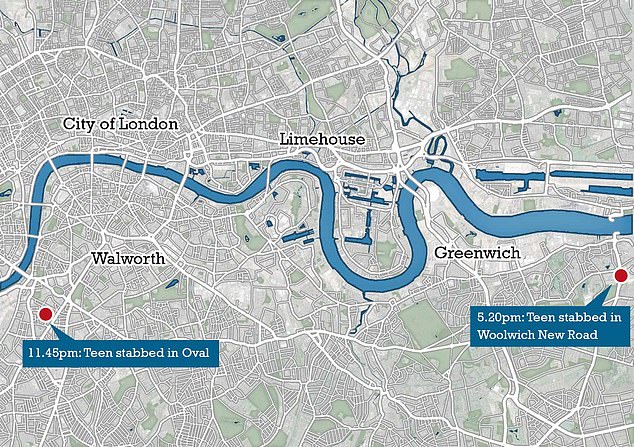 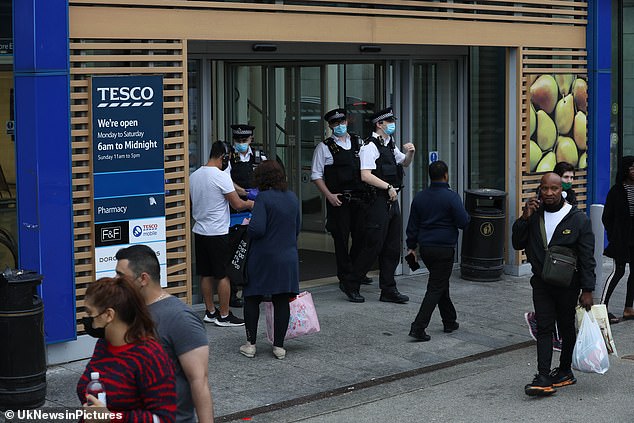 ‘Officers attended and found a 15-year-old boy suffering from a stab injury. They immediately provided first aid prior to the arrival of the London Ambulance Service.

‘Despite their efforts, he was pronounced dead at the scene at 6.08pm. His next of kin has been informed. Formal identification has not taken place.

‘A post-mortem examination will be held in due course.

‘Police were subsequently called to a south London hospital after a 15-year-old boy [A] self-presented with a stab wound; his injury is not believed to be life-threatening.

‘He has been arrested on suspicion of murder. Homicide detectives from the Specialist Crime Command are leading the investigation.’

Following the attack, a local Tesco branch was evacuated before armed police barred the entrance and raided the store ‘in search of the suspect’, My London reported. 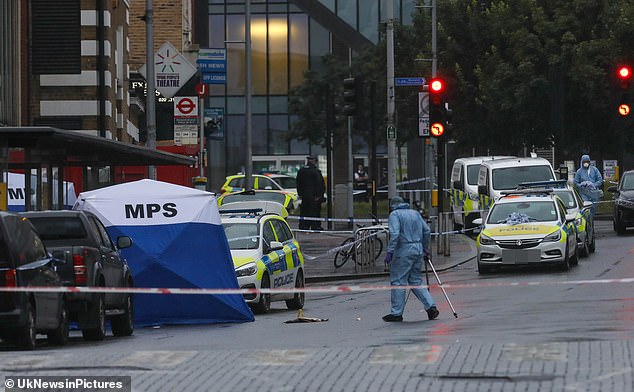 Det Ch Insp Perry Benton, of the Met’s Specialist Crime Command, said: ‘We know that there were a lot of people around at the time who may have witnessed the events leading up to this incident.

‘I’m sure people will have mobile phone footage from the scene and, if they believe it could assist our investigation, I would urge them to pass it on to us.

‘One arrest has been made, but our enquiries are still at an early stage so I would ask anyone who knows anything about the motive for this attack, or who was responsible, to contact us immediately.’

Supt Petra Lazar, of South East BCU, said: ‘It is shocking and extremely saddening that a teenage boy has lost his life as the result of knife crime.

‘My thoughts at this time are with the family of the boy who has died.

‘This incident will understandably cause worry and concern to local residents and I would like to reassure them my officers are supporting the murder detectives in every way we can. Increased patrols will be carried out in the area over the next few days.’ 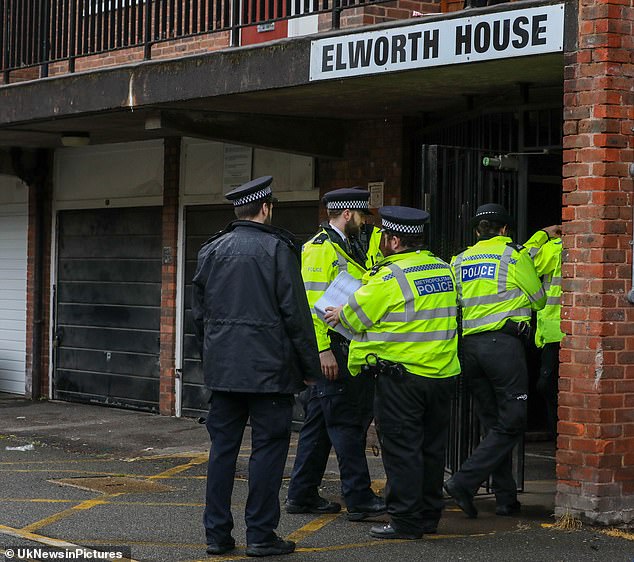 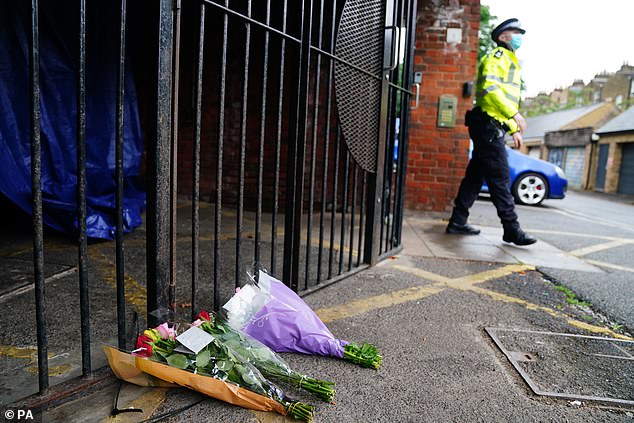 The fatal stabbing has left the community in Lambeth shocked. Pictured: flowers at the scene 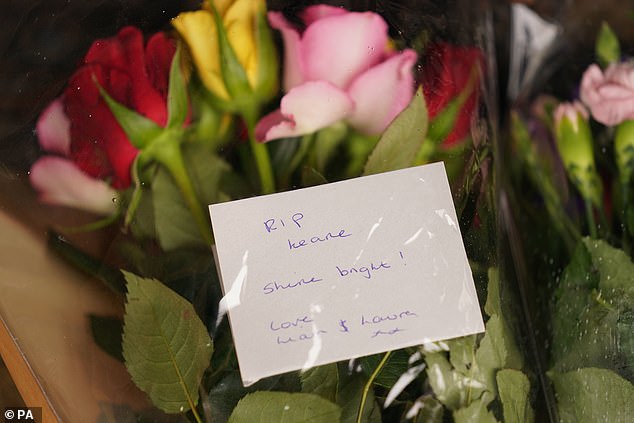 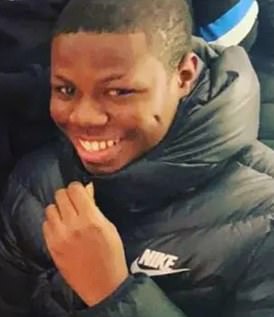 Two people have been charged with murder over the stabbing death of a 16-year-old boy in south London last week, police said.

Metropolitan Police officers were called just before 1am on Thursday to reports of a disturbance at a residential address on Bracken Avenue in Shrublands in Croydon.

A 16-year-old male was found inside the address suffering from stab wounds and despite the efforts of emergency services, he was pronounced dead just after 1.30am.

The victim has been identified as Cameron Smith from Shrublands.

Police on Monday charged two males, an unnamed 15-year-old who was arrested in Brighton, East Sussex, and 18-year-old Romain La Pierre of Amber Grove, Cricklewood, with Camron’s murder and an additional charge of robbery.

Both have been remanded in police custody and will appear at Bromley Magistrates’ Court on Tuesday.

Police said investigations are ongoing and have urged anyone with information to call the incident room on 0208 721 4961, or contact Crimestoppers anonymously on 0800 555 111.

‘A crime scene is in place and officers remain in the area. Enquiries continue.’

A section 60 Order has been authorised from 7pm last night until 10am this morning for Woolwich Common, Woolwich Riverside and Glyndon wards.

The second murder happened just over six hours later when police were called at around 11.45pm last night to reports that a teenager had been stabbed in Oval Place, SW8.

A Scotland Yard spokesman: ‘Officers attended along with London Ambulance Service. The 16-year-old male was pronounced dead at the scene.

‘The boy’s next of kin have been informed and will be supported by specialist officers. Formal identification and a post-mortem examination will be arranged in due course.

‘There has been no arrest at this early stage.’

The latest killing has left the community shaken.

A resident of Elworth House, in Oval, where a teenager was stabbed on Monday night described the incident as ‘shocking’ but ‘not uncommon.’

‘You always have issues here… it’s really bad,’ he said.

‘Unfortunately, as shocking as it is it’s not uncommon.

Reacting to news of the two stabbings, London Mayor Sadiq Khan said: ‘I am heartbroken and appalled by the deaths of two teenagers in our city.

‘Every loss of life leaves a family and a community devastated.

‘My thoughts remain with the victims’ family and friends at this extremely difficult time.

‘I am determined to do everything in my power to support the police and our communities to put an end to these horrendous crimes and keep our young people safe. This violence has no place in our city. It must stop.

‘I am in close contact with the Met Commissioner, and the police are doing everything possible to bring those responsible to justice.’

In response to the latest killing yesterday, Matthew Pennycook, the Labour MP for Greenwich and Woolwich, wrote on Twitter: ‘Woolwich is grieving the senseless murder of yet another young man on our streets this evening. Another family devastated.

‘The promise of another life extinguished. I urge anyone with any information to come forward to the police.’ 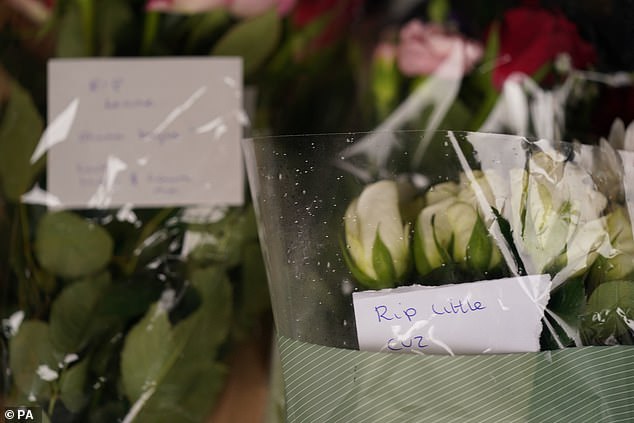 He said: ‘The thoughts and prayers of everyone in @RoyalGreenwich tonight are with the family of the young person whose life has been lost in Woolwich.

‘This senseless murder has devastated a family and our community holds them in our thoughts and prayers tonight.

‘We are working closely with MPS Greenwich to find those responsible and bring them to justice as quickly as possible. If you know anything at all please get in touch with them. Please do not share on social media.’

Witnesses who are yet to speak with police regarding the Oval murder or anyone with information are asked to call 101 ref 8532/05jul. To remain anonymous please contact Crimestoppers.

January 20: Anas Mezenner, 17, died in hospital after being stabbed in Tottenham the previous evening. Two boys, both aged 16, were charged with murder.

January 25: Romario Opia, 15, was stabbed to death in Archway.

February 19: Drekwon Patterson, 16, died in hospital after being stabbed in Wembley the previous evening.

February 26: Ahmed Beker, 19, was stabbed to death on Paddington Green.

March 6: Mazaza Owusu-Mensah, 18, was stabbed to death in Abbey Wood.

March 8: Nikolay Vandev, 19, was stabbed to death in Tottenham. Two boys, aged 15 and 17, were charged with murder.

March 10: Ezra Okobia, 14, died in hospital four days after his five-year-old brother Joseph Okobia died following a fire in the family’s flat in Greenwich. Their mother, Victoria Amaning, 34, died from her injuries on March 11. Police believe the fire was started deliberately inside the address and ruled out the involvement of a third party.

March 17: Hussain Chaudhry, 18 was stabbed to death in Walthamstow. A teenager was charged with murder and two counts of attempted murder.

April 10: Levi Ernest-Morrison, 17, was fatally stabbed in Sydenham. A woman, aged 36, was charged with murder.

April 23: Fares Maatou, 14, was stabbed to death in Canning Town.

May 7: Daniel Laskos, 16, was stabbed to death in Harold Wood. Five teenagers were charged with murder.

June 25: A 19-year-old man was stabbed to death in Sydenham.

July 1: Camron Smith, 16, is stabbed to death in Croydon shortly after midnight

July 5: A 15-year-old boy is stabbed to death in Woolwich at 5pm

Donald Trump criticized the 'Leftist Maniacs' within the U.S. ladies's soccer staff and mentioned they might have received gold...

"It was an enormous mistake to spend time with him, to provide him the credibility of being there," Gates...

The US Navy is growing a pilotless solar-powered airplane that may fly for 90 days at a time to...

LIBBY PURVES: The key stress and upset behind these unhappy abortion figures

There's an advanced unhappiness within the new figures about UK abortions. A couple of in 4 pregnancies, say nationwide statistics,...

How Easy Is It to Start Cryptocurrency Trading? 2021

BitTorrent, EOS, and Terra Price Analysis: Are these tokens worth buying this week [5th August]? 2021