A bride is facing a £10,000 fine after police raided her wedding reception being held in an east London restaurant which had its shutters pulled down.

Worried neighbours who thought the property was being burgled due to the noise called police who found more than 250 people inside the venue on the Old Kent Road in London.

Detective Superintendent Nicky Arrowsmith said: ‘Being reported for a fine is clearly not a wedding present people would be expecting, however as this was such a flagrant breach of the regulations, it was entirely necessary.’

Several nightclubs have also been fined for breaching lockdown rules, including clubs in Birmingham and Manchester.

A nightclub has been fined £10,000 after police found over a hundred revellers dancing inside a marquee – which the owners tried to pass off as an outdoor venue

A nightclub in Digbeth, Birmingham was fined £10,000 after police discovered more than 100 revellers inside a marquee at the club.

More than 50 people were found inside a flat in the Angel Meadows area of Manchester last night.

The organiser of the event has been fined £10,000 after officers found DJ mixing decks, industrial speakers and a buffet.

The force said the party was closed down and the organiser given a £10,000 fixed penalty notice for breaching coronavirus legislation – one of the first issued since Greater Manchester entered Tier 3 restrictions.

GMP said 52 fines, for a range of rule breaches and of varying amounts, have been handed out since the area’s new alert status came into force on Friday.

Assistant Chief Constable Mabs Hussain said: ‘This party was a blatant disregard of the rules and for public health.’

The Metropolitan Police in London, which is under Tier 2 alert restrictions, said officers had shut down a wedding of around 250 guests as a ‘flagrant breach’ of Covid-19 regulations.

The force said officers were called to a venue on Old Kent Road at 8.20pm on October 18 after concerned residents suspected it was being burgled.

Detective Superintendent Nicky Arrowsmith said: ‘This event was a blatant breach of the regulations and could have been a breeding ground for transmitting the virus.

‘There were over 200 people inside, no social distancing and indeed no attempts to make the venue Covid secure, in line with the Government guidelines.

‘The guidelines are there for a reason, to keep people safe.

‘Being reported for a fine is clearly not a wedding present people would be expecting, however as this was such a flagrant breach of the regulations, it was entirely necessary.’

A nightclub has been fined £10,000 after police found over a hundred revellers dancing inside a marquee – which the owners tried to pass off as an outdoor venue.

The organisers, who claimed the event was being held outdoors even though the marquee had a roof and walls, were fined £10,000 for breaching coronavirus restrictions.

In the video, loud house music can be heard being pumped from the speakers as police enter the specially constructed marquee and find around 120 people inside.

His female partner replies: ‘Never in a month of Sundays.’

The cop can then be heard explaining to the owner: ‘If we go back to why we’re trying to do this, we’re trying to get the air to circulate out aren’t we so the virus won’t spread.

‘You’ve also got groups in there who are dancing, they are supposed to be sat down aren’t they. You’ve got a responsibility to control your patrons.

‘This is not a game anymore, people are dying, you’ve got to understand this alright?’ 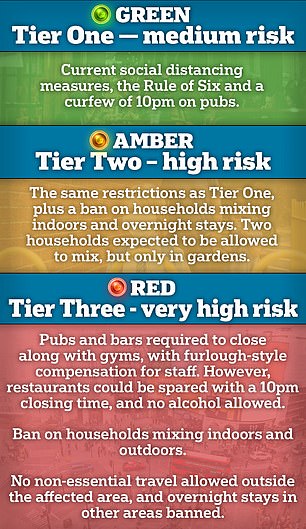 The popular warehouse nightclub – which promises revellers a ‘intergalactic rave in the beating heart of the Midlands’ has become the fourth venue in the region to be recently slapped with a hefty fine.

A shisha lounge, hotel manager and illegal rave organiser have all previously been hit with the £10,000 penalties by West Midlands Police.

People in Birmingham and most of the West Midlands are banned from mixing with different households indoors under the tier 2 ‘high’ coronavirus alert level.

Sergeant Nick Giess, from Birmingham police’s licensing team, said: ‘The venue tried to argue that it was an outdoor event, but there were walls and a roof so it was essentially a building and did not fall into the same category as a beer garden.

‘We spoke to people sat at five tables, and four of them had people from different households on.

‘People were being allowed to freely move around without masks on and dance to really loud music – all of which goes against the rules that have been put in place to stop the virus spreading.

‘People shouldn’t think that we’re trying to stop people’s fun. It’s the opposite – we’re trying to protect people and limit the spread of the virus so that restrictions can hopefully be eased.’ 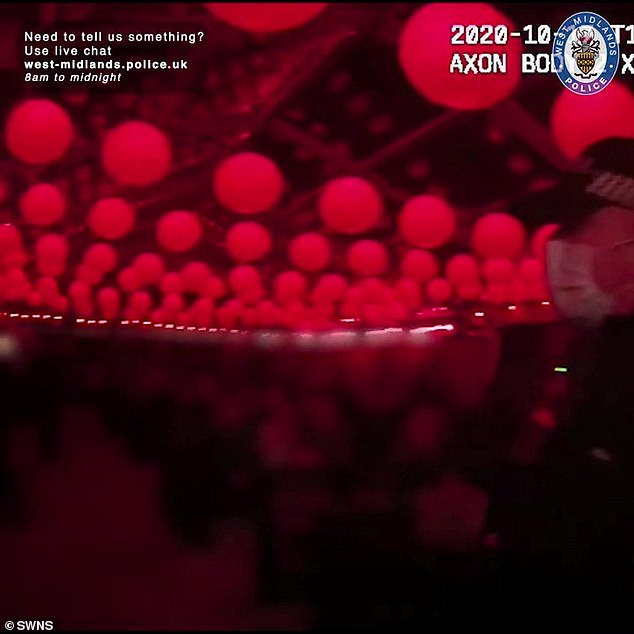 Body-cam footage shows officers entering Lab 11, in the trendy Digbeth district area of Birmingham, in the West Midlands, after concerns were raised on Saturday night

In a statement on the nightclub’s website, they revealed they have now been forced to close down.

They wrote: ‘It saddens us to say this, but LAB11 will temporarily close with immediate effect.

‘We have done everything within our power to create a safe, enjoyable environment, following the restrictions and guidelines throughout.

‘Despite very difficult, self funded, re-investment and changes to the venue, the latest set of guidelines and our discussions with authorities, has cast elements of doubt over the legalities and practicalities of being open.

‘Being enforceable, we must respect the guidelines along with efforts to maintain them.

‘Providing a safe outlet to socialise for people who normally enjoy nightlife whilst also trying to protect numerous jobs at the venue and supporting companies has been our priority throughout these last few months, unfortunately at this point, this is becoming unfeasible.

‘With a lack of funding support given to the venue this has added further pressures to our survival.

‘Any ticket holders will be issued a full refund within 7 days.

‘We will assess the viability of re opening as and when the guidelines change in the future. If we consider it safe to do so then we will be back at that point.’ 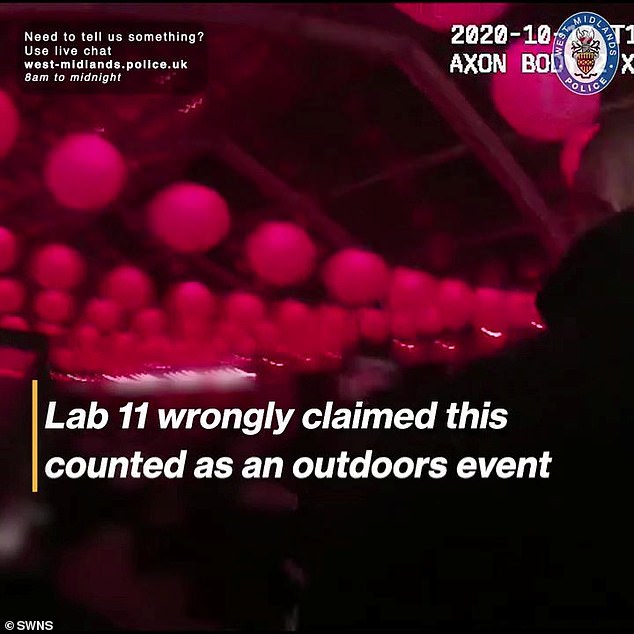 The organisers, who claimed the event was being held outdoors even though the marquee had a roof and walls, were fined £10,000 for breaching coronavirus restrictions

ICYMI: The puppy born green and other curiosities

The heartbroken best friend of an 'angel' law graduate ambushed and beaten to death in an 'opportunist stranger attack' today revealed their final texts less than 36 hours before...