Hundreds of men may be living with a potentially deadly condition just discovered by National Institutes of Health (NIH) scientists.

NIH researchers began seeing a trickle  of men with the strange network of symptoms (which, oddly, but unrelatedly mirror those of COVID-19), coming into their clinics.

Three of these men shared a gene mutation, and the scientists later discovered dozens more who had the mutation – and the same life-threatening set of symptoms.

Now, they suspect that hundreds or more men in the US may have VEXAS – and if the men the NIH have studied so far are representative, 40 percent of them may die, of a disease that didn’t have a name before now. 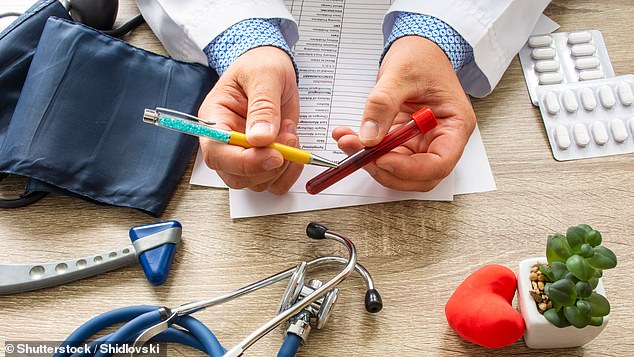 Inflammation, in small doses, is an essential part of the immune system’s ability to fight infection.

But when it becomes chronic, for any number of reasons, it can prove fatal.

And it’s a particularly American disease. Nearly 125 million people in the US suffer some form of chronic inflammatory condition.

Often caused or exacerbated by obesity, there are many such diseases, and distinguishing one from another is challenging because they may have multiple overlapping causes and symptoms.

After exhausting their own doctors’ potential explanations for symptoms of chronic inflammation, some patients wind up at the NIH’s research hospital in Bethesda, Maryland.

‘We had many patients with undiagnosed inflammatory conditions who were coming to the NIH Clinical Center, and we were just unable to diagnose them,’ said Dr David Beck, clinical fellow at NHGRI and lead author of the paper on VEXAS.

Typically, a diagnosis is made based on a group of symptoms and lab findings.

But that wasn’t working, so the NIH team decided to try a different approach.

‘That’s when we had the idea of doing it the opposite way. Instead of starting with symptoms, start with a list of genes. Then, study the genomes of undiagnosed individuals and see where it takes us.’

They sequenced the entire genomes of 2,560 patients who had undiagnosed inflammatory conditions.

More than 1,000 of them shared symptoms of recurring fevers and inflammation throughout their bodies, not just affecting specific parts or systems.

They found one anomaly, shared by three men in the group.

Each had two copies – instead of one – of a gene called UBA1, which is found on the X chromosome.

Because men have just one X chromosome, and one Y (as opposed to women, who have two X chromosomes), genetic abnormalities on this chromosome can have particularly profound effect on men’s health.

‘We were amazed to see this and wondered what it could mean. And that’s when it clicked–this was only possible if there was mosaicism in these men,’ said Dr Beck.

The UAB1 mutations were present in myeloid cells, which are largely responsible for mounting the  innate (or inborn) immune system’s first defense against infection – including inflammation.

After scouring the genomes of other patients stored in NIH databases, the study authors found 22 other men with the mutation, and most had a similar pattern of symptoms: fevers, clots, lung abnormalities and cavities, known as vacuoles, in their myeloid cells.

The researchers named the disease after its symptoms and genetic origin: VEXAS, a much simpler acronym for vacuoles, E1 enzyme, X-linked, autoinflammatory and somatic syndrome.

Discovering the  disease and its cause was a revelation – but it came too late for some of the men it affected. So far, 40 percent have died.

Given the prevalence of the VEXAS mutation in their databases, the NIH researchers think that hundreds more men may be suffering from the disease  – and their lives may be in danger.

The team’s next steps will be to try to what they’ve learned about the condition to develop therapeutics.