No escape! Moment four police cars smoothly box in and stop a getaway driver on a busy motorway

Four police cars stopped a suspect fleeing down the M1 motorway in a slick operation that saw them surround the target vehicle on all sides.

Dashcam footage from a Northamptonshire Police pursuit vehicle shows three drivers ahead combining to make a rolling roadblock that brought the BMW to a halt without any damage on Monday afternoon.

The footage starts with a marked police car moving over to the left beside the black BMW, while another marked vehicle drives alongside it on the right.

Almost simultaneously an unmarked vehicle moves into the path of the target BMW, cutting off its escape. 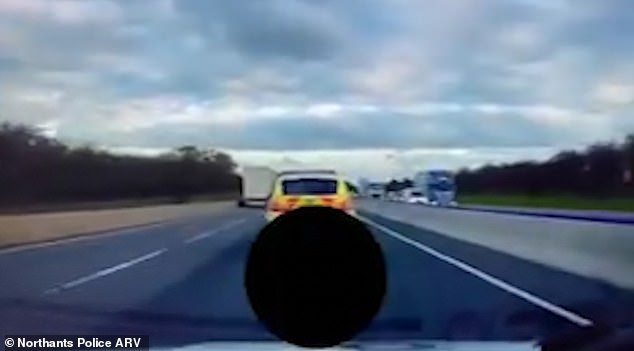 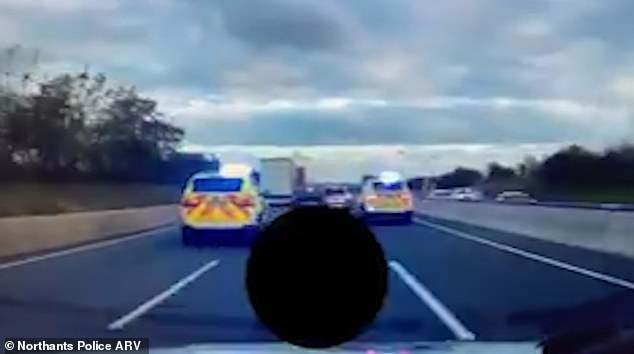 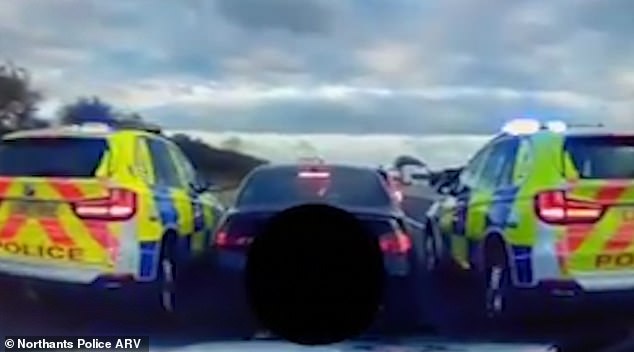 As the sirens and blue lights are turned on the three police vehicles ahead brake swiftly, forcing the BMW to do so too, as the vehicle behind also draws closer.

The four police cars, having blocked the suspect, convince them to stop and they are arrested.

Northamptonshire Police confirmed the driver was arrested at the scene.

The car, which had been linked to crimes in the West Midlands Police area, triggered an Automatic Number Plate Recognition system alert.

Northamptonshire Police posted footage of the dramatic stop on its Twitter feed, describing it as: ‘Tactical Pursuit and Containment (TPAC) at its finest’.

One social media user responded to the video: ‘Extraordinary – like watching the Red Arrows on the motorway. What speed was this?’

The police unit responded that the suspect was going at a maximum of 65mph through a section of roadworks.

John Rose commented: ‘That is such a clever, skilful and well executed manoeuvre.’ Many others also praised the skill and the speed the police drivers were able to bring the suspect to a halt.

One added: ‘There was no getting out of there.’ Another said he wished they were able to see the suspect’s face when he was suddenly surrounded by four police cars.

Another said: ‘That was the best TPAC I have ever seen.’ 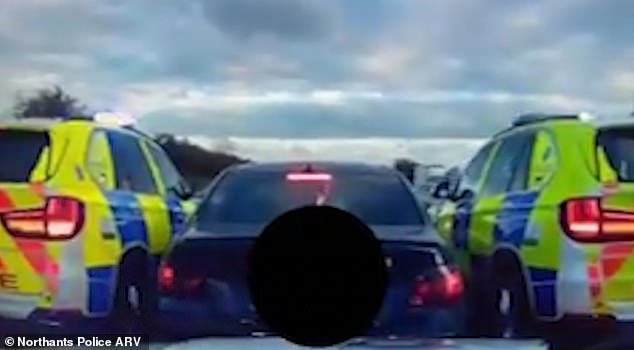 With nowhere to go, the suspect was arrested at the scene on behalf of West Midlands Police