No more acorns! Hungry squirrel chows down on a LIZARD in stomach-churning images

No more acorns! Hungry squirrel chows down on a LIZARD in stomach-churning images

A biologist in south east Arizona was shocked to discover that lizard was on the menu for one squirrel that he came across by the side of a dirt track.

Jeff Nordland, from San Diego, California, was on the hunt for photo opportunities when he came across a squirrel sat on the side of the road.

When he pulled out his camera to get a closer look at the squirrel, he realized that the animal was munching away on a lizard, rather than a mouthful of nuts.

Jeff believes the squirrel came across was a Rock Squirrel and that the lizard being eaten was a Clark’s Spiny lizard. 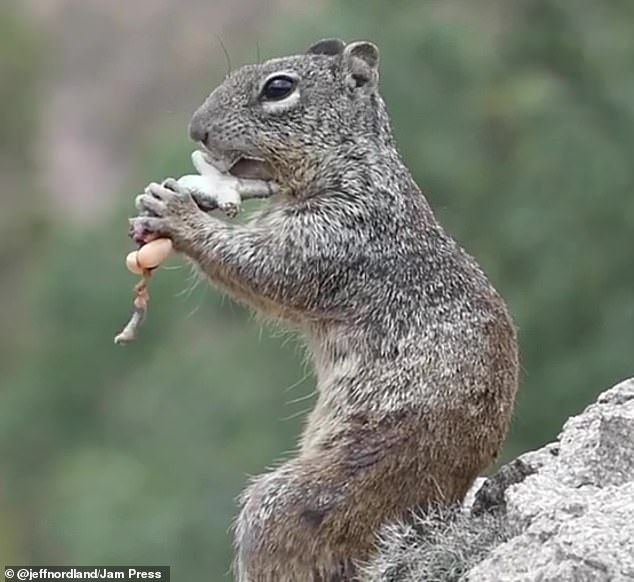 The squirrel is sat perfectly still holding the lizard in both its paws while internal organs and what appear to be eggs are seen hanging out of the bottom of the squirrel’s meal.

Speaking about the unexpected sight, Jeff said: ‘It’s possible that the lizard had been killed by a passing vehicle and then the squirrel scavenged it off the road.

‘Rock squirrels are known to scavenge dead animals from roads, including other squirrels.

‘The thing is, the lizard body didn’t appear to have been totally crushed by a car tire and Clark’s Spiny lizards primarily live in trees. 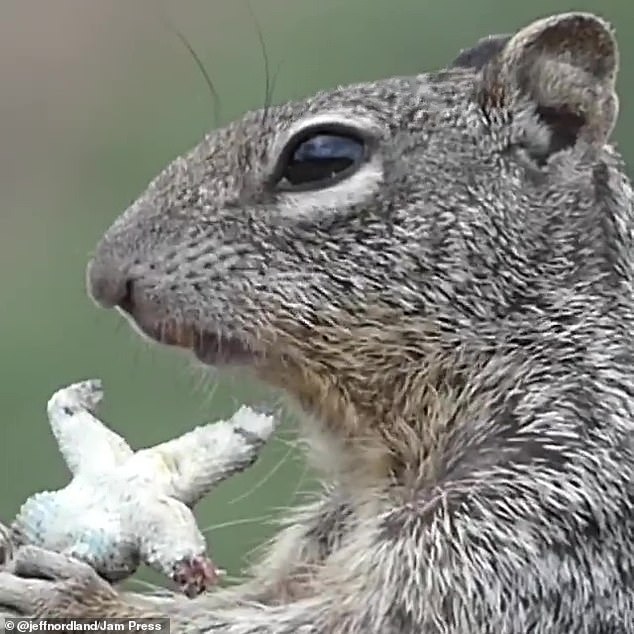 Jeff pulled out his camera and filmed the squirrel enjoying its meal. As he zoomed in it was clear that internal organs and what appear to be eggs were dangling from the lizard

‘I don’t think I’ve ever seen one on a road but gravid lizards of many species do frequently use roads and roadside berms to bask and warm themselves to a higher than normal temperature, in order to mature their eggs sufficiently before laying.

‘It’s also possible that the squirrel grabbed the lizard off of a tree trunk or rock, dispatched it with a bite to the head, then proceeded to devour it bite by chewy bite.

‘I felt bad for the poor lizard, and I was a bit astonished.

‘Exactly how it all went down will remain a mystery.’ 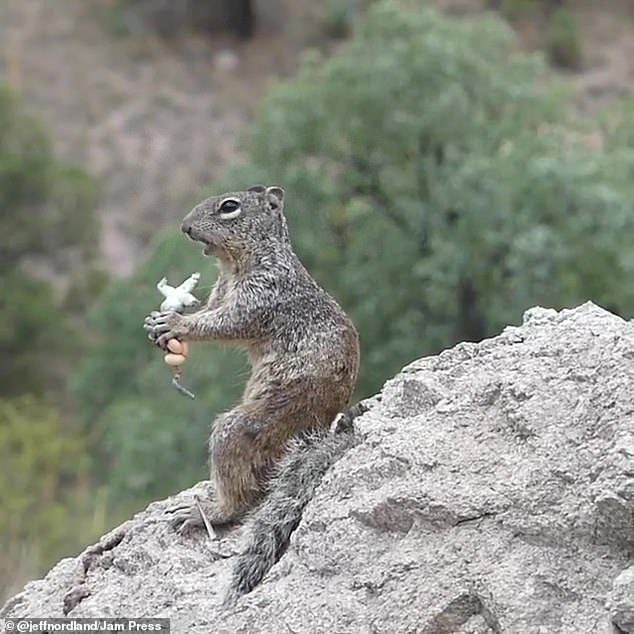 Squirrels are omnivores, meaning they consume other animals such as lizards and snaked as well as the more typically-expected nuts and berries

Jeff visits Arizona twice every year to take wildlife photographs but he said this is the first time he has ever seen a squirrel eating another animal.

The footage was originally posted on Jeff’s Instagram account on July 22 but has recently been re-shared online.

Rock squirrels are one of the largest member of the Scuridae family and can grow to measure a foot in length.

They are native to native to the Sonoran Desert, and from Southern Nevada, Utah, Colorado, Oklahoma, and south through Arizona, New Mexico and into Mexico.

Though many people imagine the diet of a squirrel to consist of berries and nuts, they are actually omnivores and so often consume small bird eggs, lizards and snakes.

Responding to the video, one person commented: ‘No that’s a first for me. Awesome shot.’

Another described the video as something ‘from The Walking Dead’.