‘No red carpet and no point’: Damning verdict on the tarnished Golden Globes


‘No red carpet and no point’: Damning verdict on the tarnished Golden Globes after years of mismanagement and alleged sexist and racist behaviour by its organising body leads to a Tinseltown boycott

By Caroline Graham For The Mail On Sunday In Los Angeles

With wall-to-wall A-list celebrities, free-flowing champagne and a ‘raucous’ atmosphere, the Golden Globes were the ‘younger, naughtier sibling’ of the Oscars, with stars clamouring to strut down the red carpet in front of millions of TV viewers around the world.

But tonight’s 79th Golden Globes ceremony has seen the party come to a screeching halt.

Years of mismanagement and alleged sexist and racist behaviour by its organising body – the Hollywood Foreign Press Association (HFPA) – has led to a Tinseltown boycott.

There will be no celebrities, no red carpet and no prime-time show from the American TV giant NBC. Most major PR firms, with the exception of Sunshine Sachs – which ‘advises’ the Duke and Duchess of Sussex’s Archewell Foundation – have blacklisted the event.

The event will not even be live-streamed and Netflix has refused to allow the ceremony to air clips of its films, including The Power Of The Dog, starring Benedict Cumberbatch, who is favourite for the Best Actor award, which will be couriered to him tomorrow if he wins.

There are no presenters and the winners will be announced by press release at the end of a 90-minute ‘socially distanced’ event in the Beverly Hilton Hotel. 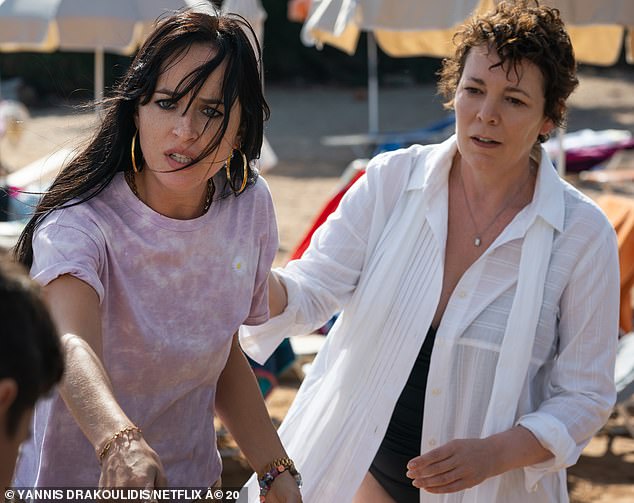 GONG: British star Olivia Colman (right)  in The Lost Daughter, is up for Best Actress

‘There has never been a bigger or more dramatic fall from grace than the Globes,’ said a producer from Hollywood giant Disney. ‘It used to be the most fun night of the year. The booze flowed.

‘While it had a serious side because whoever won the Globe was usually favourite to win the Oscar, everyone hated the HFPA. They behaved appallingly but they got away with it because winning a Globe added prestige to a movie and translated into bucks at the box office.

Another source said: ‘The party’s over. The Globes used to be the Oscars’ younger, naughtier sibling but now they have been cast out from the Hollywood family. They are toxic.’

It is understood the event will be attended by masked, vaccinated, socially distanced members of the HFPA plus ‘a handful of guests from various charities’. One former winner said: ‘It sounds about as much fun as a root canal surgery.’

The event’s dramatic fall began last February when the Los Angeles Times newspaper revealed not one of the HFPA’s 87 members was black.

Actress Scarlett Johansson then claimed she had been subjected to ‘sexist’ questions during HFPA events ‘which bordered on sexual harassment’.

There were also allegations of corruption and bribery when it emerged 30 members took a 2019 trip to Paris and stayed in a £1,000-a-night hotel courtesy of Paramount, producers of the hit Netflix show Emily In Paris. The drama later received two nominations. Members routinely accepted ‘freebies’ from movie studios and some HFPA members were not ‘legitimate’ journalists.

The HFPA responded to the criticism by announcing sweeping changes in May last year. President Ali Sar said: ‘We remain dedicated to becoming a better organisation and an example of diversity, transparency and accountability in the industry.’

HFPA’s most recent tax filings show it raised $32 million (£23.5 million) in 2019, but gave just $5.9 million (£4.3 million) to charity. Despite the gloom, British stars are tipped to do well, although a source said: ‘Whether they brag about it as usual remains to be seen.’

As well as Cumberbatch, Olivia Colman could win the Best Actress gong for The Lost Daughter and Sir Kenneth Branagh is up for Best Director for Belfast. Andrew Garfield (Tick, Tick… Boom!) is shortlisted in the Best Actor category and Irish actress Ruth Negga (Passing) is up for Best Supporting Actress.