No10 left parts of a message congratulating Donald Trump on an image of Boris Johnson welcoming Joe Biden‘s election, it was revealed today.

The extraordinary blunder came in a post hailing the Democrat’s victory posted on the official Downing Street account over the weekend.

Issued in the aftermath of TV networks calling the knife-edge result for Mr Biden, it quoted Boris Johnson offering congratulations to him and vice-president elect Kamala Harris on her ‘historic achievement’.

‘The US is our most important ally and I look forward to working closely together on our shared priorities, from climate change to trade and security,’ the message said.

However, eagle-eyes observers spotted traces of another – and much longer – text in the background of the slick image. By adjusting the colour and contrast, it is possible to make out the words ‘Trump’ and ‘second term’.

The mistake came hours before Mr Johnson revealed he had spoken to the president-elect.

In a tweet this afternoon the PM said: ‘I just spoke to Joe Biden to congratulate him on his election. I look forward to strengthening the partnership between our countries and to working with him on our shared priorities – from tackling climate change, to promoting democracy and building back better from the pandemic.’ 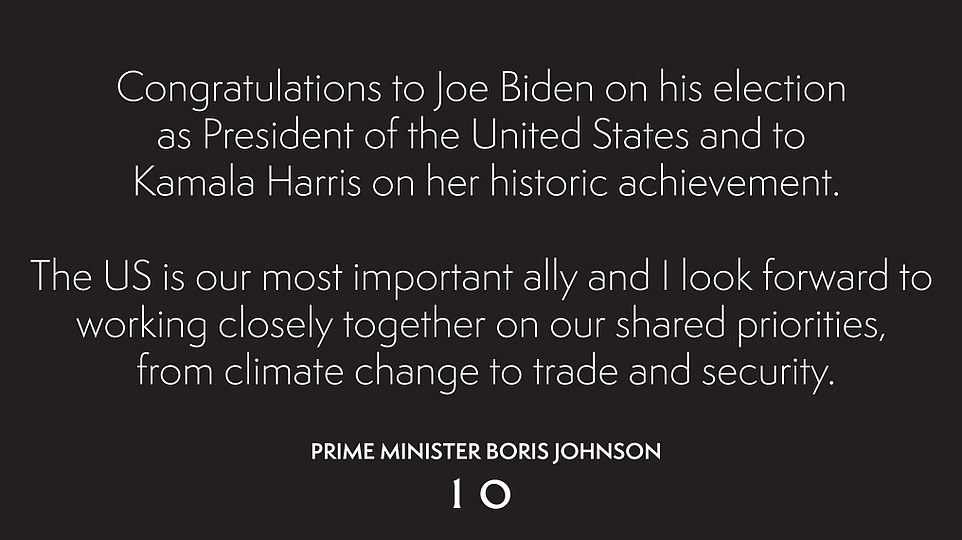 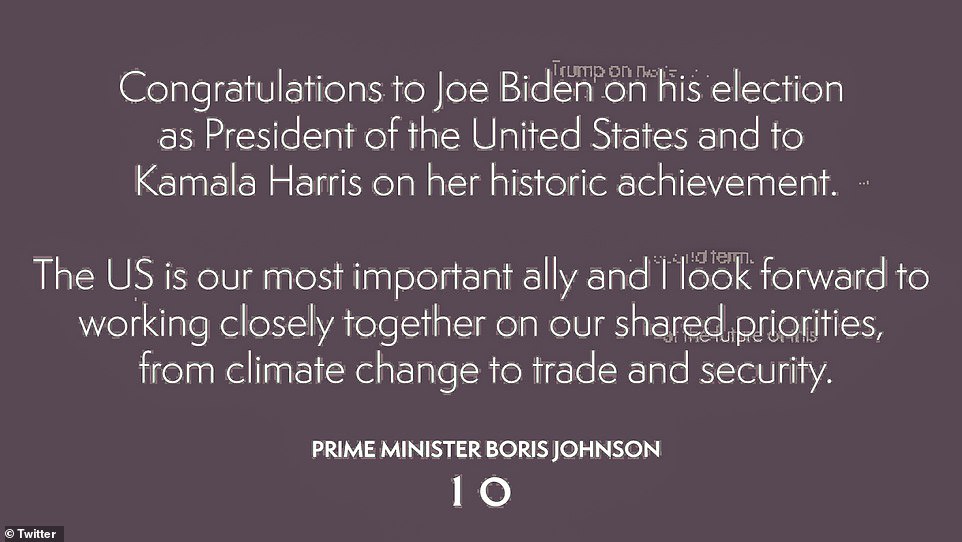 However, eagle-eyes observers spotted traces of another – and much longer – text in the background of the slick image. By adjusting the colour and contrast, it is possible to make out the words ‘Trump’, ‘second term’ and ‘the future’ 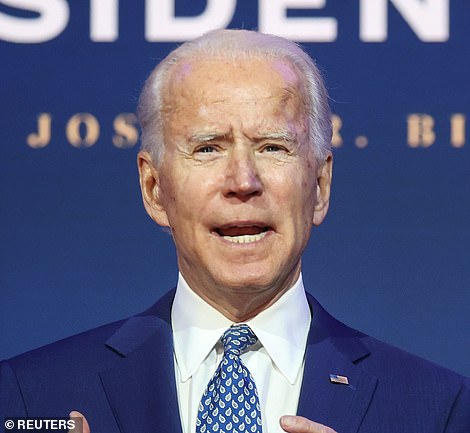 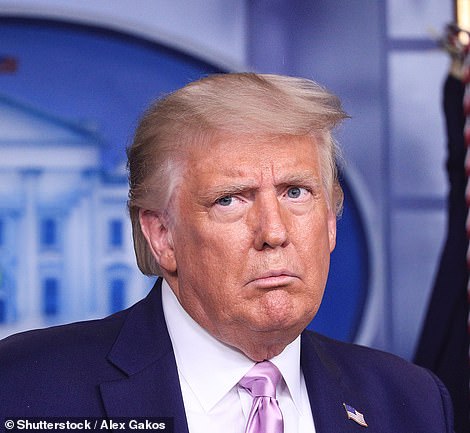 Mr Johnson has struck up warm ties with Mr Trump (right) since becoming PM, while there have been tensions with Mr Biden (left) and Democrats over Brexit and the impact on the Good Friday Agreement 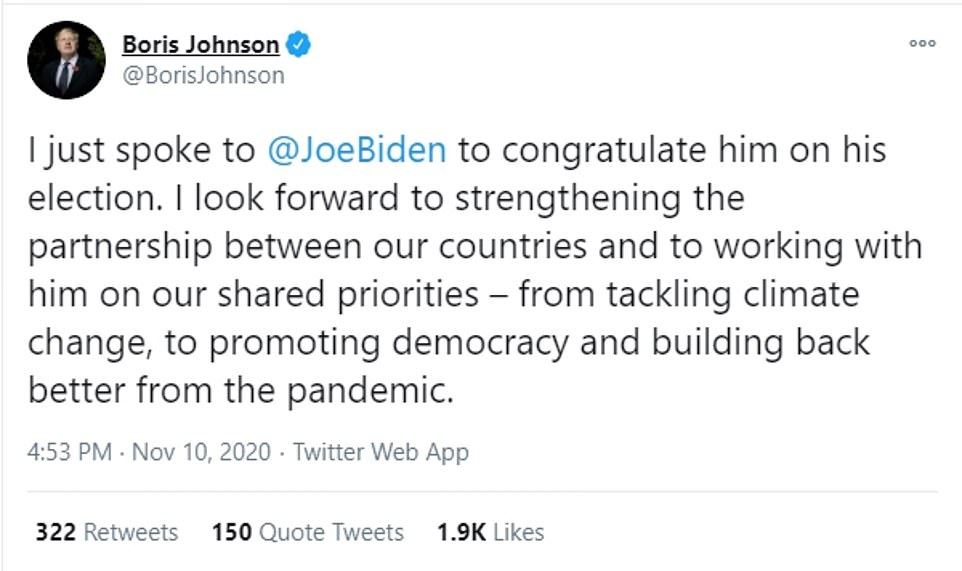 Matt Hancock today insisted the rules on release of clinical trials are ‘very strong’ and the timing is driven by ‘science’ – despite Donald Trump crying foul about Pfizer’s vaccine bombshell.

The dramatic news that the firm’s jab had proved 90 per cent effective in initial tests broke yesterday, less than a week after the knife-edge US election and under 48 hours after Joe Biden was declared the winner.

Mr Trump and his allies have expressed fury at the timing, with the President saying the US regulators and Democrats ‘didn’t want to have me get a Vaccine WIN, prior to the election, so instead it came out five days later’. The company has flatly denied any political motive to the timing.

In a round of interviews this morning, Mr Hancock delivered a robust defence of the system for issuing clinical results.

Without referring to the US backlash, Mr Hancock stressed that such information had to be published ‘immediately that the science comes good’ and the timing was not dictated by politicians or the companies themselves.

But the bungle, first noticed by the Guido Fawkes political blog, left Tory MPs in despair.

‘This was meant to be a sure footed, collaborative government,’ one said. ‘None of that is happening.’

It fuelled fears that the relationship with the new White House administration is off to a rocky start.

Mr Johnson has struck up warm ties with Mr Trump since becoming PM, while there have been tensions with Mr Biden and Democrats over Brexit and the impact on the Good Friday Agreement.

Ministers have insisted the Special Relationship will remain strong, but it appears Mr Johnson is some way down the list of world leaders Mr Biden plans to call.

Irish PM Micheal Martin tweeted this afternoon that he had spoken to the incoming US president.

However, the tweet was quickly deleted and government sources in Dublin admitted that while a call is being arranged it has not yet happened.

No10 admitted that an ‘alternative’ message had been prepared in case Mr Trump triumphed, as the election was so close.

A Government spokesman said: ‘As you’d expect, two statements were prepared in advance for the outcome of this closely contested election.

‘A technical error meant that parts of the alternative message were embedded in the background of the graphic.’

At a press conference last night, Mr Johnson again offered his congratulations to Mr Biden, but refused to tell Donald Trump to throw in the towel rather than mount legal challenges.

The premier said he did not ‘wish to offer any other commentary’ on the matter after he insisted the UK will have a good relationship with the US regardless of who is president.

Mr Johnson said the UK has had ‘a good relationship with the White House for many, many years and I have no doubt that we will continue to have a very, very strong, very close relationship with our American friends’.

Democratic sources have questioned whether Mr Johnson is an ‘ally’, with Mr Biden having previously described him as a ‘physical and emotional clone’ of Mr Trump.

Mr Biden is also said to still be angry about Mr Johnson’s past criticism of Barack Obama.

Downing Street today confirmed that the two men have still not spoken after diplomatic sources said the PM was unlikely to be ‘top of the list’. 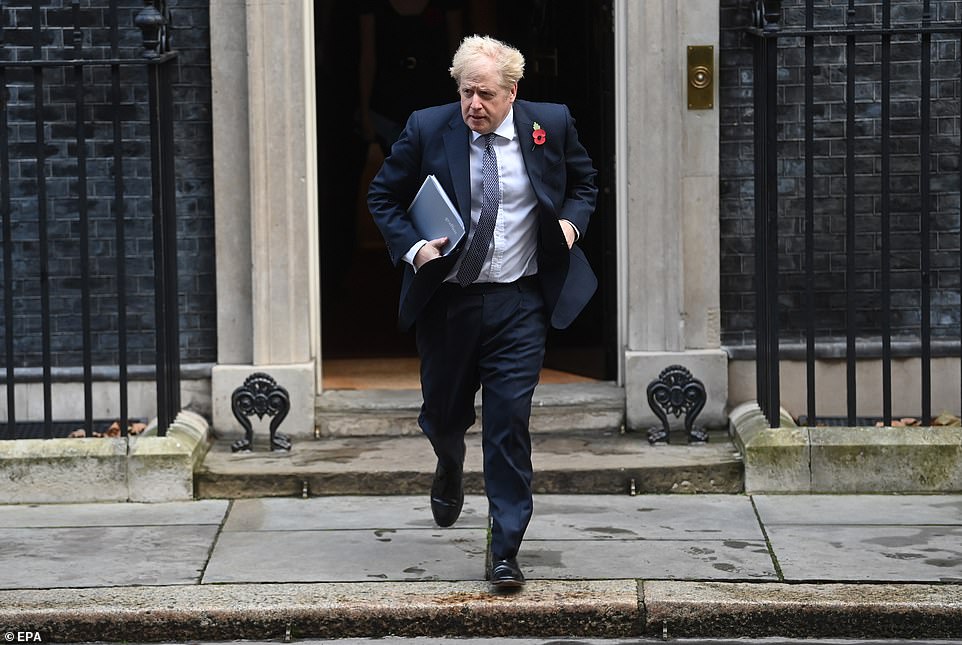 Ministers have insisted the Special Relationship will remain strong, but it appears Mr Johnson (pictured in Downing Street today) is some way down the list of world leaders Mr Biden plans to call

Mr Johnson said last night: ‘I really congratulate President-elect Biden and Kamala Harris who is going to be the first ever female vice president of the United States.

‘One thing that is very exciting that you are already seeing from the incoming administration is their willingness to join the UK in the campaign to tackle climate change and as you know we are hosting the COP26 summit in Glasgow next year.

‘The UK has been leading in calling, the first major economy, to call for countries to get to net zero carbon emissions by 2050 and suddenly with the advent of President-elect Biden we are seeing the US really willing to take a lead too on climate change which I think is great news to say nothing of Nato and all sorts of other things.’

President Donald Trump’s campaign along with White House Press Secretary Kayleigh McEnany staged a chaotic press conference overnight where they claimed the election is ‘not over’ and attacked ‘partisan’ election officials but offered no new evidence of the fraud they allege.

The crowded, heated affair was just latest by Trump forces alleging fraud that ended in scraps with the media – including one in Philadelphia where the first witnesses trotted out by Trump lawyer Rudy Giuliani turned out to be a convicted child sex offender.

The campaing held the event to make its claims while lawyers filed a 105-page, double-spaced lawsuit in Pennsylvania court making its case to throw out more than 600,000 votes. 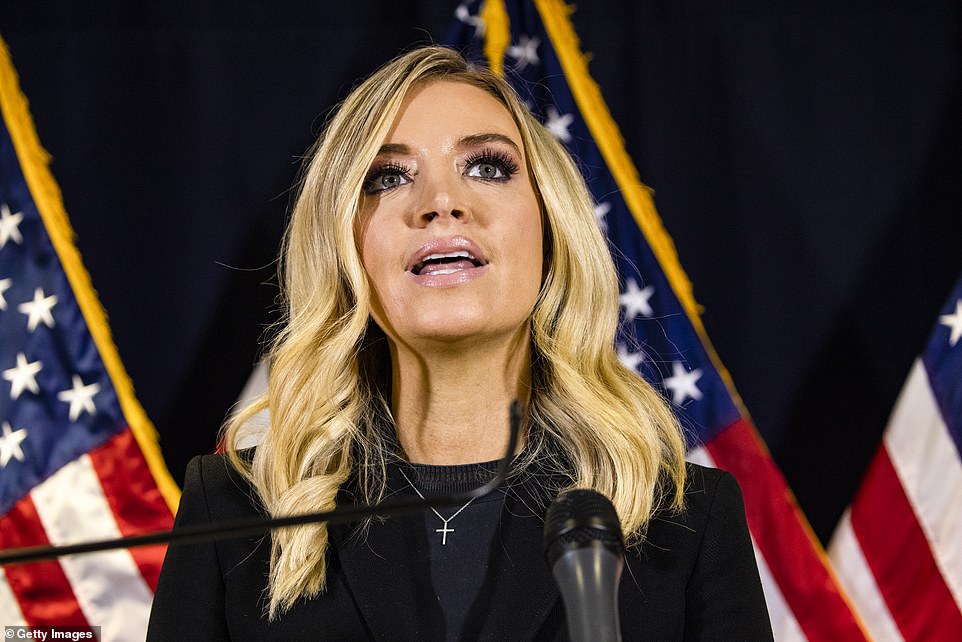 White House Press Secretary Kayleigh McEnany spoke at a chaotic press conference where she accused Democrats of trying to ‘tip the scales’ of the election. She misstated the name of the county where Philadelphia is located and didn’t provide evidence of fraud

At the presser, it was McEnany, who was there on personal time from her job as a taxpayer-funded employee, as well as Republican National Committee head Ronna McDaniel laying out the allegations, and taking just a few questions.

‘What we have seen across the country is Democrat officials systematically trying to do an end run around the Constitution to tip the scales of the election in their favor,’ said McEnany, who also lectured reporters, telling them to ask questions of election officials when they questioned her.

‘Isn’t the president just being a sore loser?’ asked a reporter after McEnany abruptly ended the event, held at RNC headquarters in Washington.

‘Our poll watchers were put behind barricades in a massive room. They were many feet from the counting process. And in fact when you look at all the tables, many hundreds of feet in fact from the tables in the back. They were completely in the dark,’ she said.

‘What are Pennsylvania Democrats hiding,’ she asked.

A British boxer surprised an Olympic viewers tonight when he refused point-blank to put on his medal on the...

John Corbett and Bo Derek had been secretly married final yr after almost 20 years as a pair, having...

But once more the Covid pessimists have been proved fallacious. These peddlers of doom predicted the near-complete easing of...