North Korea has told its citizens to stay indoors because of a mysterious ‘yellow dust’ cloud which it is feared could spread coronavirus from China.

Kim Jong-un‘s regime is urging people to stay inside and shut their windows due to the approaching ‘dust storm’ from China, according to state-controlled media.

The secretive kingdom claims it has never had a case of Covid-19 but warns that ‘malignant viruses can be transferred even by air’.

According to NK News, the streets of Pyongyang were empty on Thursday as Kim’s subjects seemingly complied with the order. 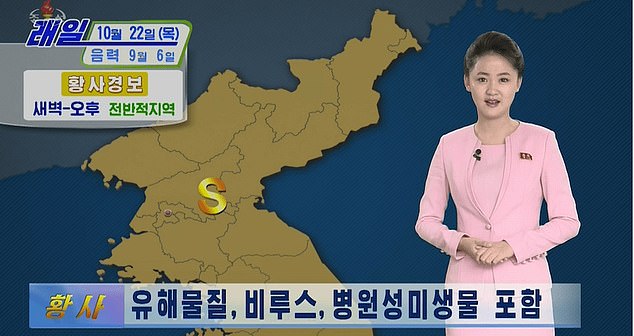 Why has Kim’s wife not been seen for months? Experts suspect she fears Covid-19

Kim Jong-un’s wife Ri Sol-ju has not been seen in public since January, prompting speculation in North Korea about her whereabouts.

Experts in the South believe that Ri may be avoiding public events because she fears contracting Covid-19, according to NK News.

They say the fact that her last appearance was just before the pandemic began to spin out of control suggests her absence may be linked to the virus. 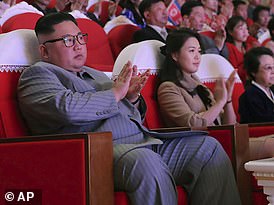 In North Korea, there are rumours that Ri could be suffering from some other health issue or caring for a sick member of the ruling dynasty.

One theory says the sick patient could be Kim Kyung Hee, the aunt of North Korea’s supreme leader.

Another theory is that Ri has been concentrating on educating her daughter, thought to have been born in 2013.

‘In light of the current situation that new coronavirus infection continues to spread around the world and data that malignant viruses can be transferred even by air, the necessity to deal with the yellow dust phenomenon consciously and to take thorough measures is becoming more prominent,’ it said.

‘Above all, it is important to refrain from outdoor activities and never go outside unnecessarily.’

People must wear masks when they go outside, while windows and doors must be ‘thoroughly closed’ at home to contain the mysterious dust.

The yellow dust warnings were relayed in weather forecasts on North Korean television on Thursday.

The stay-at-home message was also passed to foreign diplomats in Pyongyang, according to the Russian embassy in North Korea.

The new restrictions were imposed because the dust could allow Covid-19 to ‘be introduced into the territory of the republic’, the Russian diplomats said.

The possible airborne spread of the virus is still not fully understood, although the CDC says that Covid-19 mostly seems to spread at short range.

‘There is no evidence of efficient spread (i.e. routine, rapid spread) to people far away or who enter a space hours after an infectious person was there,’ it says.

Despite the supposed lack of cases in North Korea, the regime has imposed strict border controls and quarantine measures in response to the pandemic.

The lockdowns have worsened economic problems in a country already reeling from US sanctions, according to UN experts.

The UN  has said that as much as 40 per cent of the population faces food shortages, which may have been worsened by severe summer floods and typhoons. 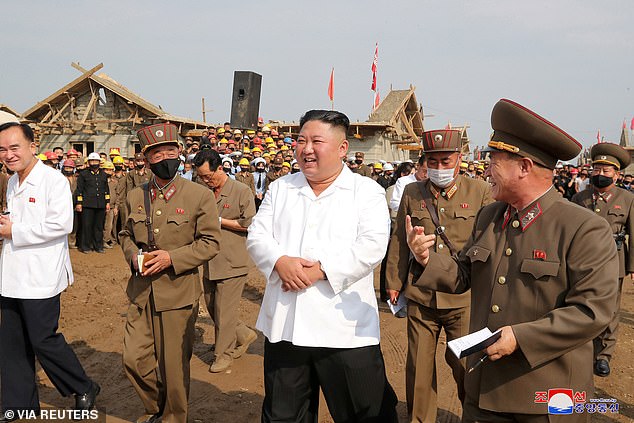 Officials in the US and South Korea are among those to have cast doubt on Pyongyang’s claims that not a single person has been infected.

In July, the North locked down the border city of Kaesong after a defector apparently returned across the border showing virus symptoms.

At the time, state media was unclear over whether the man had been tested, saying ‘uncertain result was made from several medical check-ups.’

The WHO later said that test results had been ‘inconclusive’, while Kim has continued to claim that no cases have been confirmed.

At a military parade earlier this month he said he was grateful that ‘not a single person’ had been infected.

‘I wish good health to all the people around the world who are fighting the ills of the evil virus,’ he added.

South Korea has fewer cases and deaths than most other wealthy countries, with 25,698 infections and 455 fatalities confirmed since the start of the pandemic.