Senior leaders of North Korea were pictured clapping, cheering and weeping as the country’s main orchestra put on a special patriotic performance to celebrate the 75th anniversary of the Worker’s Party.

The officials, including some of the country’s highest-ranking officials and members of Kim’s inner circle, were seen wearing face masks as they watched the 137-person Samjiyon Orchestra perform in Pyongyang on Thursday.

It comes ahead of a major military parade on Saturday that will be presided over by Kim Jong-un, where he is expected to show off his missile and perhaps unveil new weapons.

North Korea’s leadership have occasionally been pictured wearing face masks in the past, though the country has not officially admitted to having any coronavirus cases. 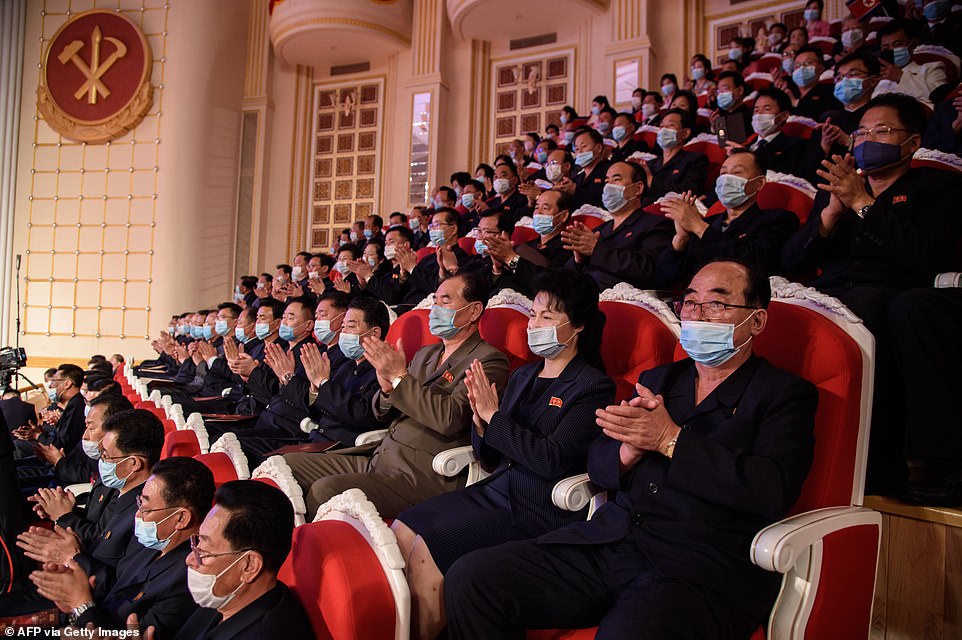 North Korea’s senior leaders donned masks as they packed into the Theatre of the Samjiyon Orchestra in Pyongyang on Thursday, to watch a special patriotic performance as part of celebrations marking the 75th anniversary of the Worker’s Party 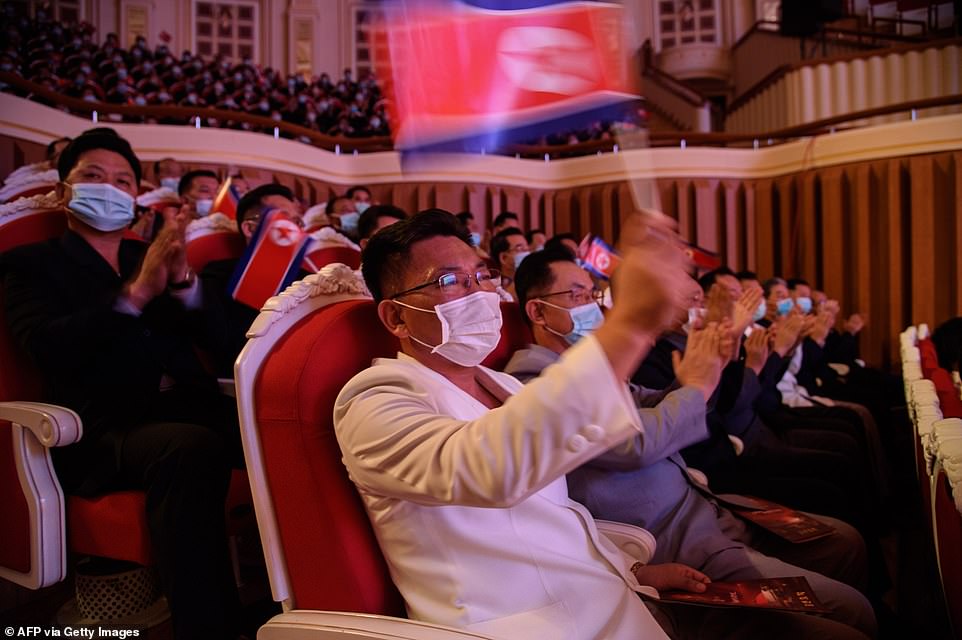 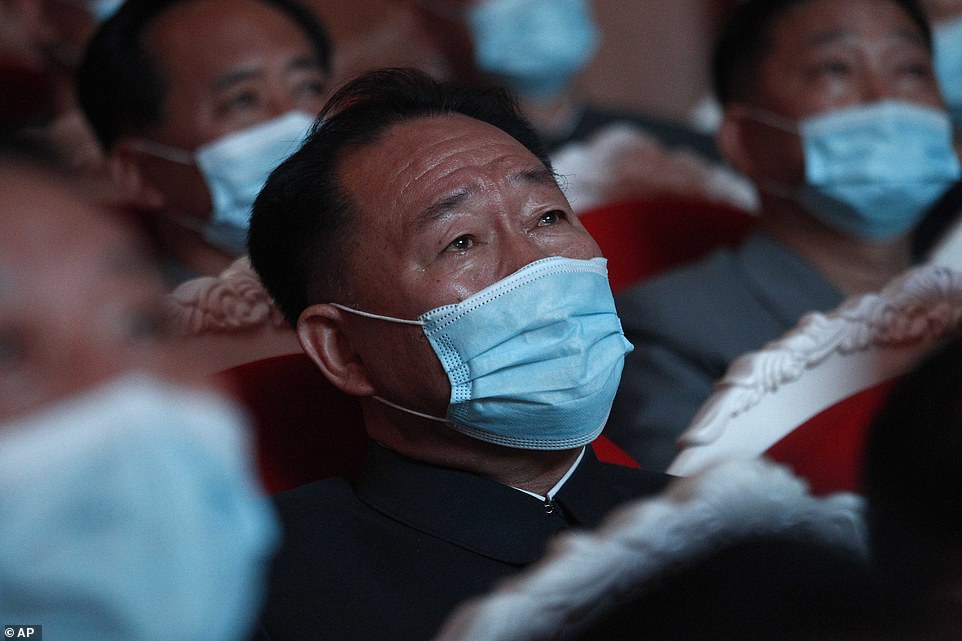 The performance proved overwhelming for some, who were seen tearing up as the artists took to the stage 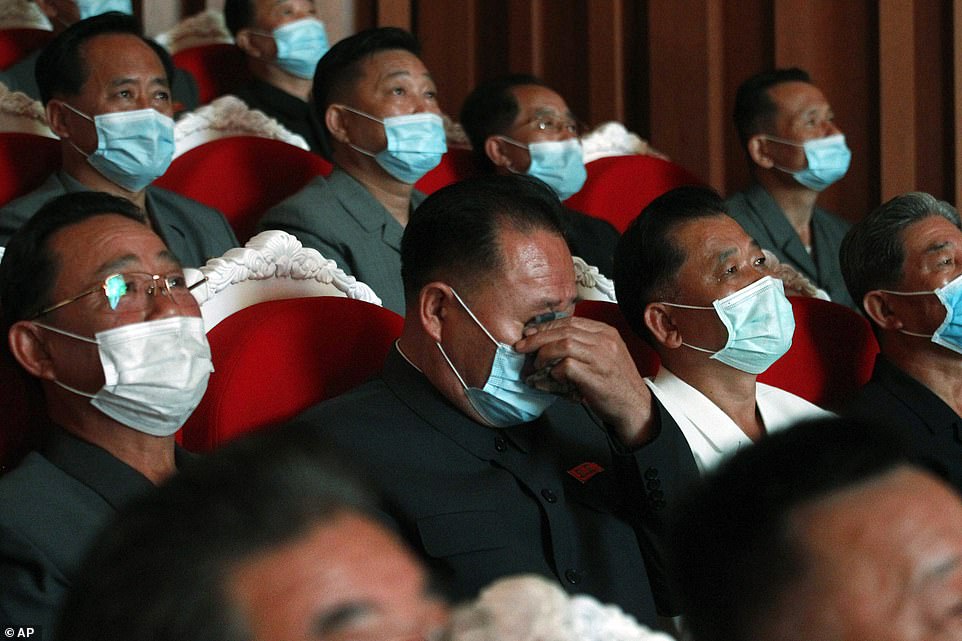 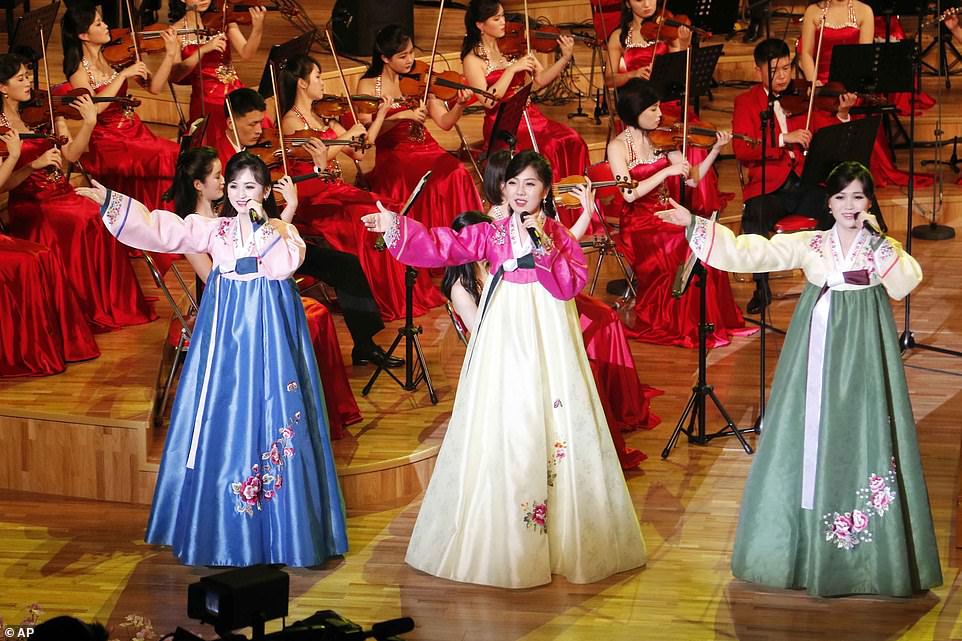 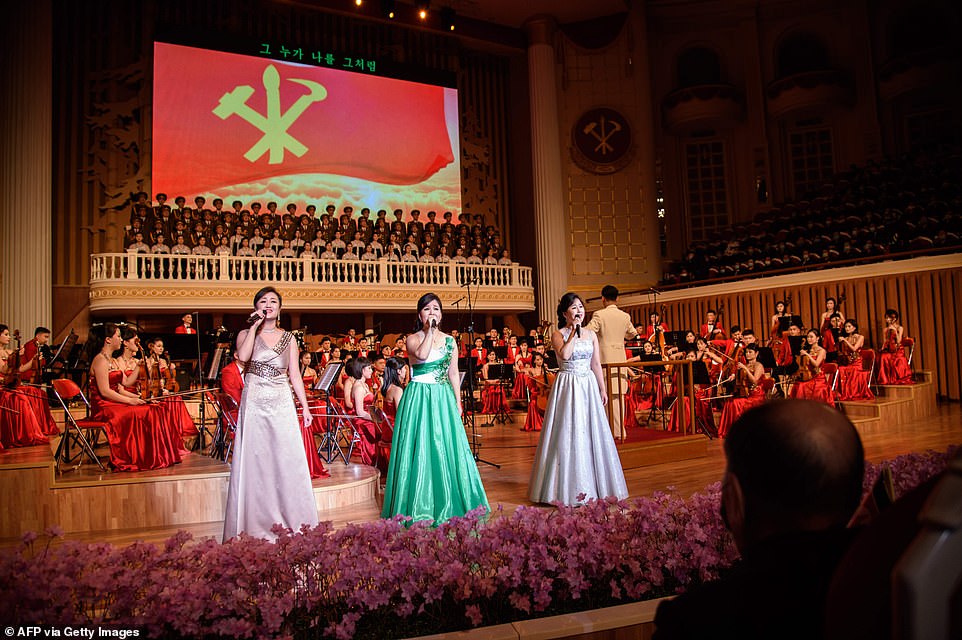 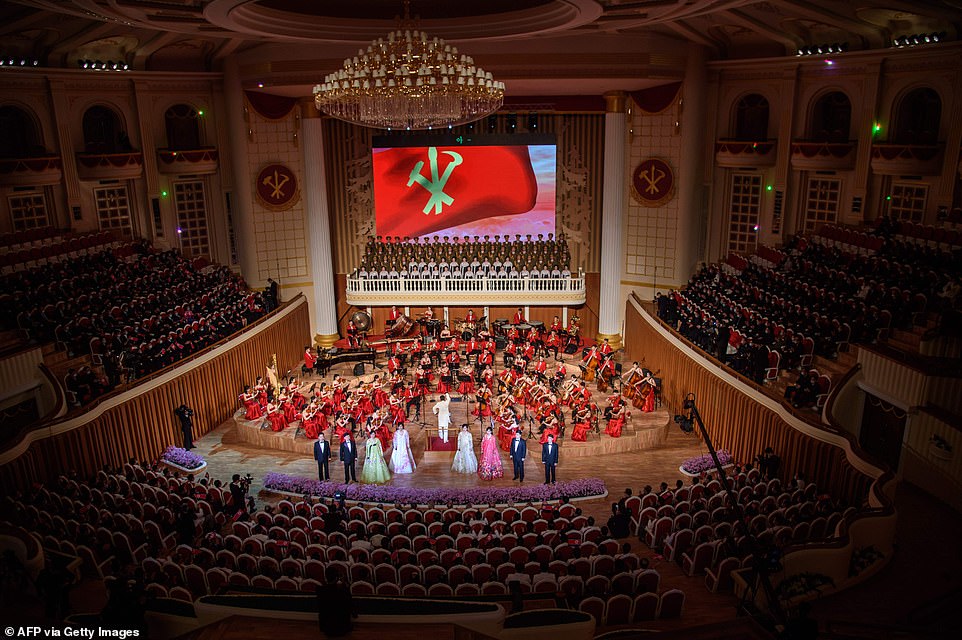 While the events are designed as a show of strength and unity by North Korea, an expert has warned that celebrations could turn into coronavirus superspreader events because of a lack of protections 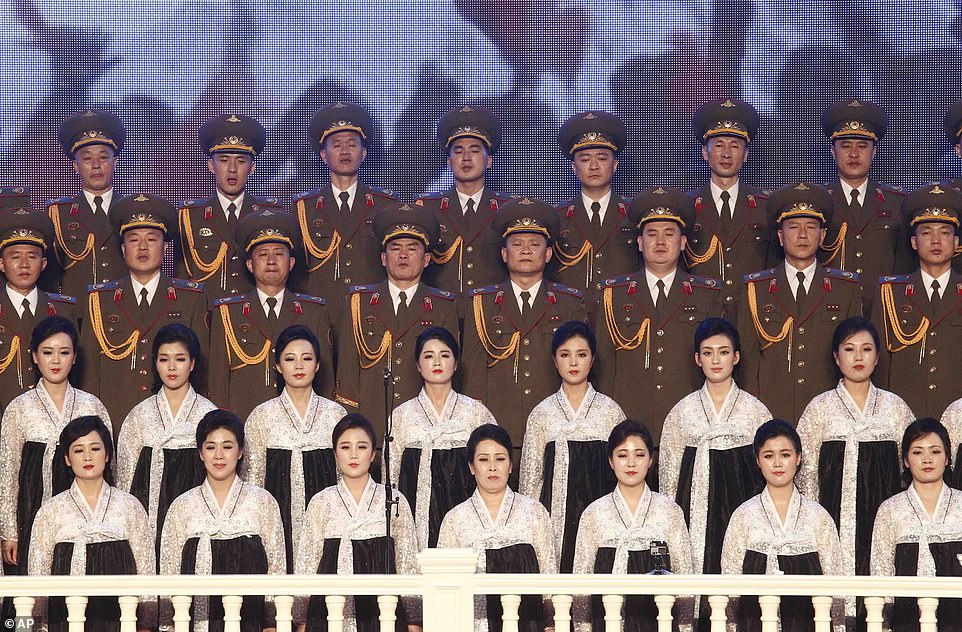 Experts have warned that Saturday’s parade, which is expected to feature thousands of troops marching in close formation and is typically watched by large crowds, could turn into a coronavirus super-spreader event.

The event is designed to be a major show of strength for Kim – who is thought to have suffered a recent bout of ill-health himself – but observers warn it could backfire by spreading coronavirus among the military.

Harry Kazianis of the Center for National Interest warned that ‘extreme precautions’ would be require to eliminate the risk of infection, but are unlikely because they would not be in keeping with the message of strength that Kim wants to portray.

Kim is also widely expected to use the event to show off some new weaponry, after threatening to do so in December last year.

However, others have cautioned that a test during the Worker’s Party event is unlikely, and that Kim will use the parade to show off his collection of missiles.

Among the things that North Korea could showcase would be a new kind of intercontinental ballistic missile – the kind capable of hitting the United States.

Experts believe North Korea has long been working on a solid-fueled ICBM, which is quicker to launch than the country’s current liquid-fueled rockets – allowing it to respond to attacks faster or launch a surprise attack more easily.

Another major development would be an ICMB with multiple nuclear warheads in its nosecone, increasing the number of targets Kim could hit if he launched an attack.

Alternatively, Kim may simply display more of the missiles he already has along with more launch vehicles – showing off an increased capacity to strike enemies in the event a war breaks out.

Indeed, the presence of any ICMBs at the parade would be viewed as a warning sign.

Kim has refrained from showing off the weapons at all since 2018, as he entered into nuclear talks with Donald Trump which also saw him halt long-range weapon tests. 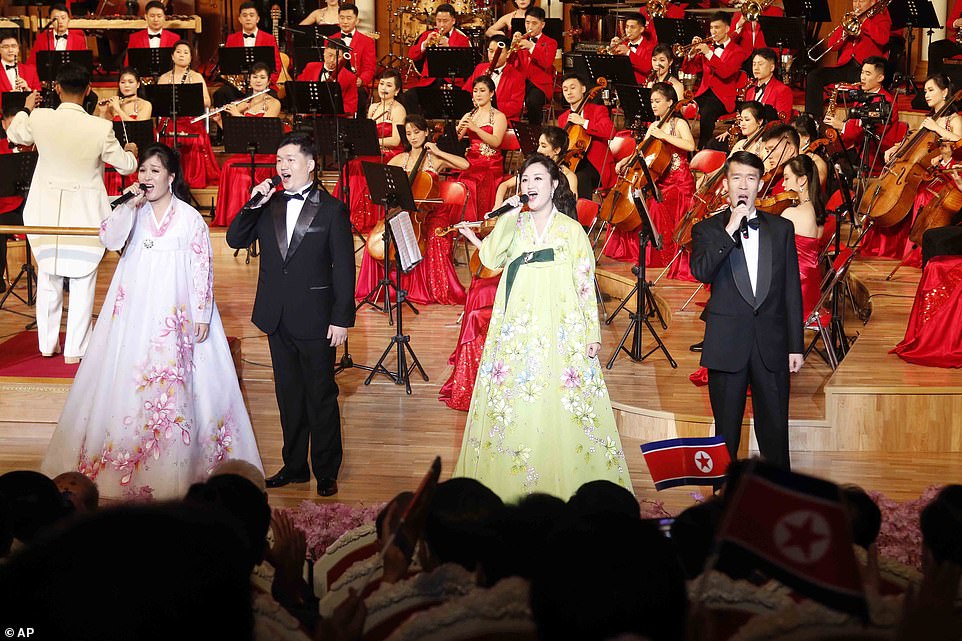 North Korea is putting on a weekend of events in and around Pyongyang to mark the founding of its Worker’s Party, which is the country’s supreme Communist authority 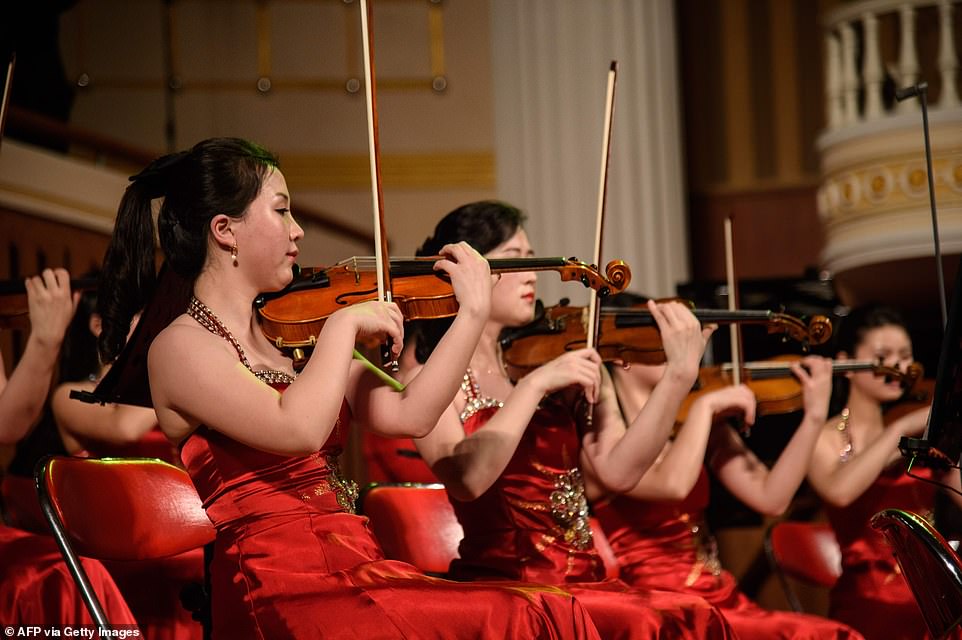 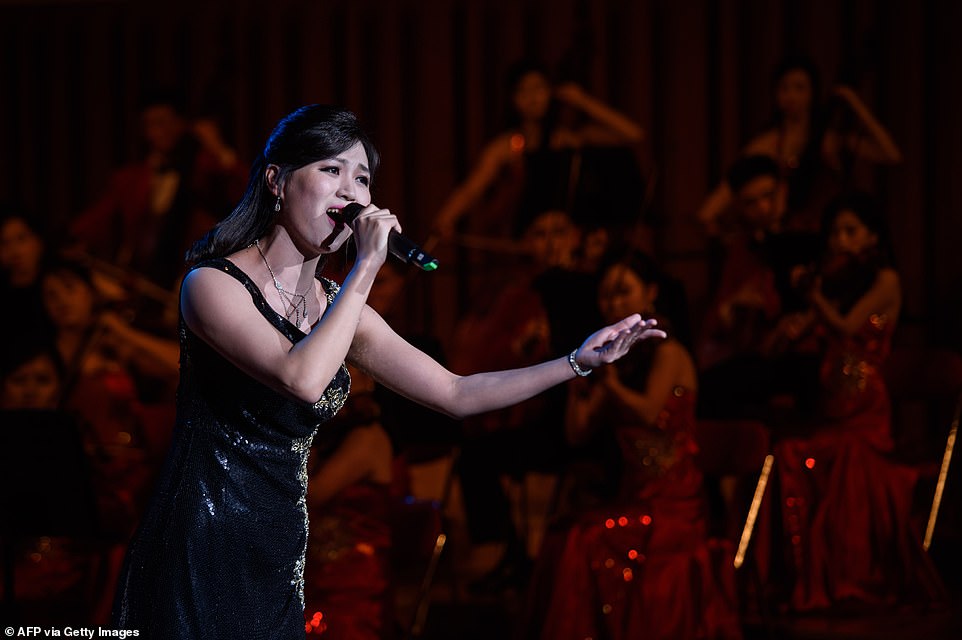 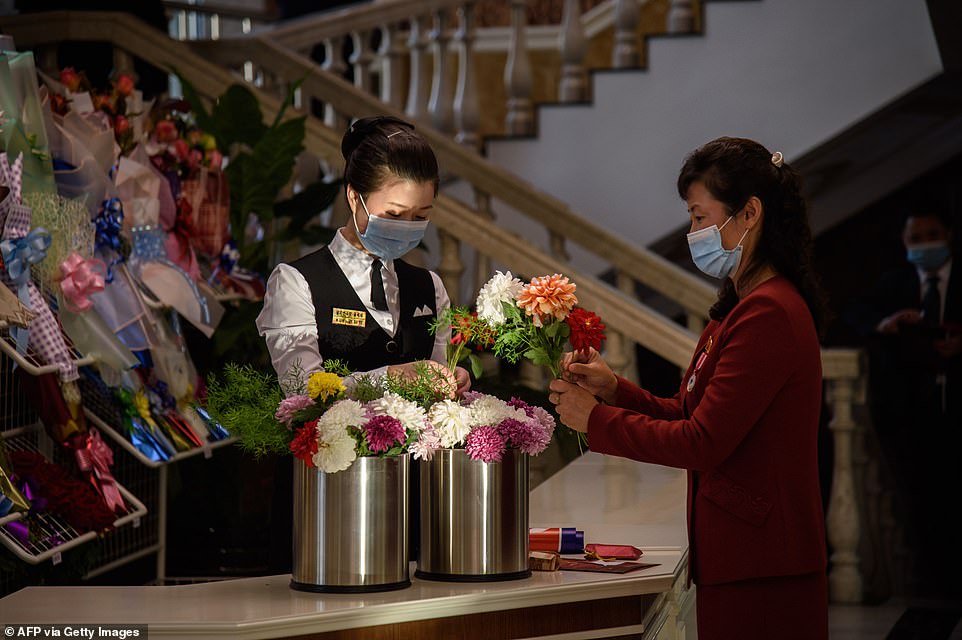 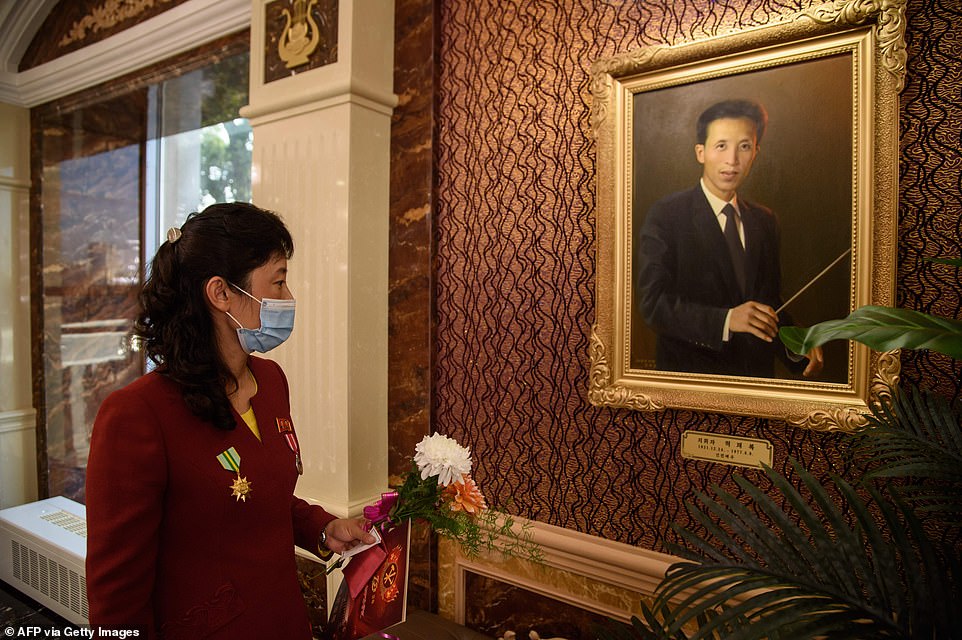 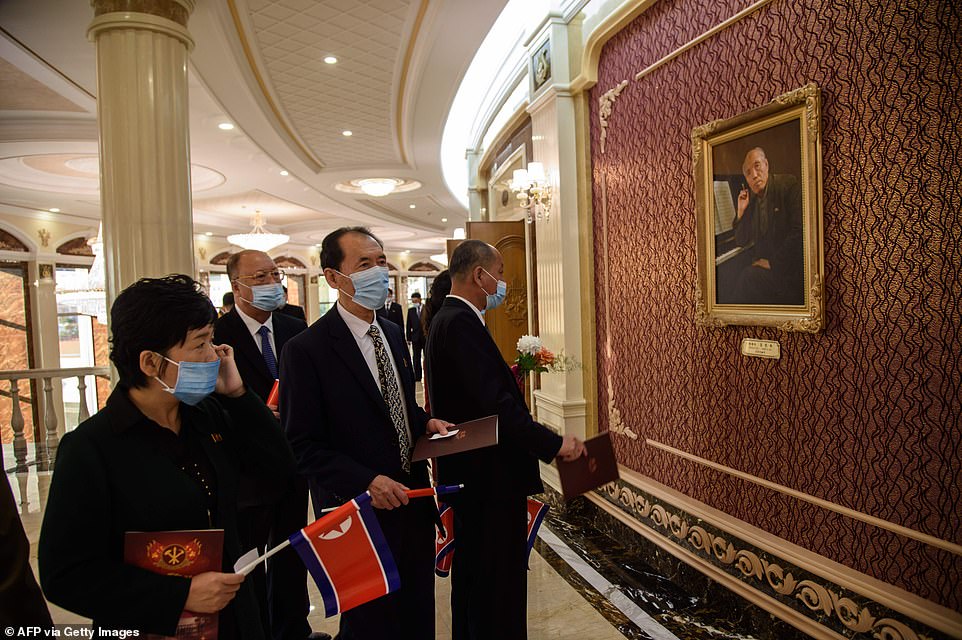 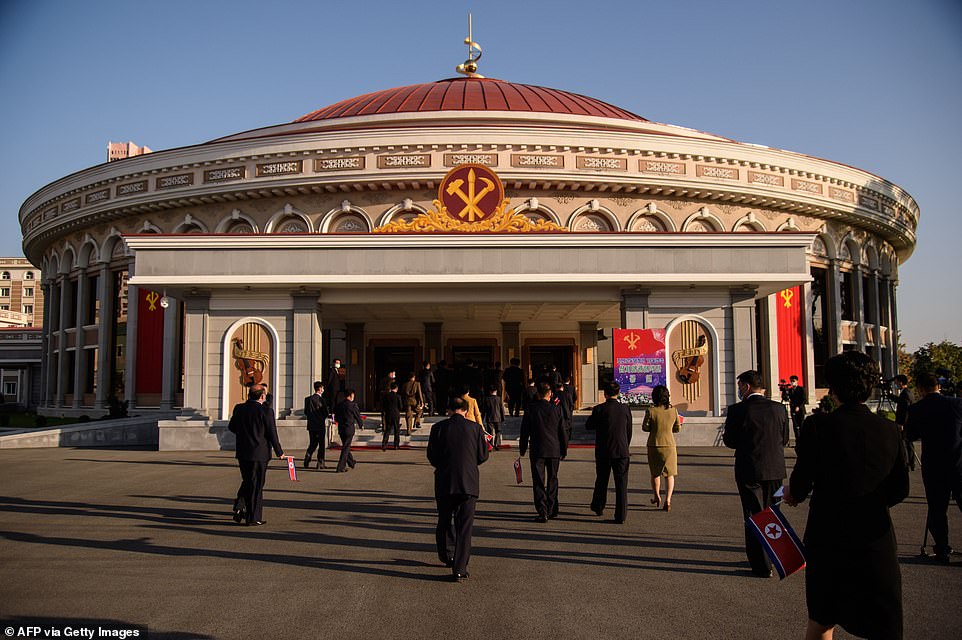 Attendees are shown walking into the Samjiyon Theatre in Pyongyang on Thursday, ahead of the anniversary concert 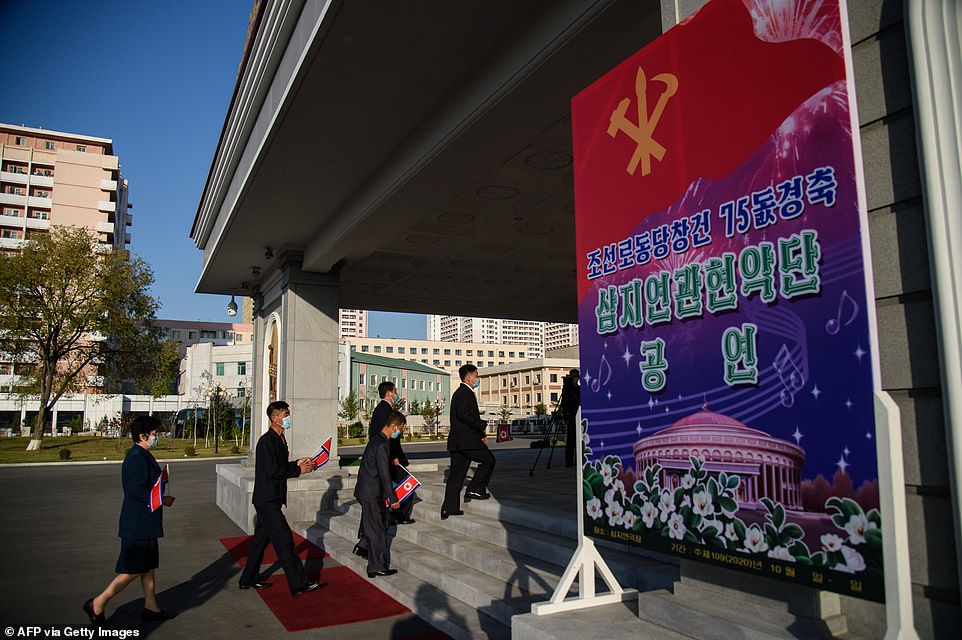 Attendees walk past a poster advertising the concert, marking the 75th anniversary of the founding of the Worker’s Party

But with talks now stalled and a US election imminent, Kim may be keen to issue a warning that the hiatus will not last forever.

Displaying the weapons during Saturday’s parade would be a way to do so without resorting to a full-scale launch, which could provoke a harsh response from either Trump or his replacement.

Saturday’s anniversary comes during a difficult year for North Korea as the pandemic and recent storms add pressure to the heavily sanctioned country.

Pyongyang closed its border with China in January to try to prevent contamination, which USFK Commander Robert Abrams said effectively ‘accelerated the effects’ of economic sanctions imposed on North Korea.

Last week Pyongyang’s troops shot dead a South Korean citizen who had drifted into its waters, apparently as a coronavirus precaution, causing outrage in the South.

The incident sparked a rare apology from Kim himself.

The parade will aim to send the domestic audience a message that ‘despite the economic hardships they face, they are a militarily strong nation’, Town said.

The tightened coronavirus border controls have also hampered construction of the flagship Pyongyang General Hospital, whose opening has been flagged as part of the 75th anniversary celebrations.

North Korea has long used giant infrastructure projects to try to burnish the government’s credibility, and Kim has berated officials several times over its progress.

Photos carried by state media in recent weeks show work on the building’s shiny white exterior is in its final phases, but analysts remain sceptical. 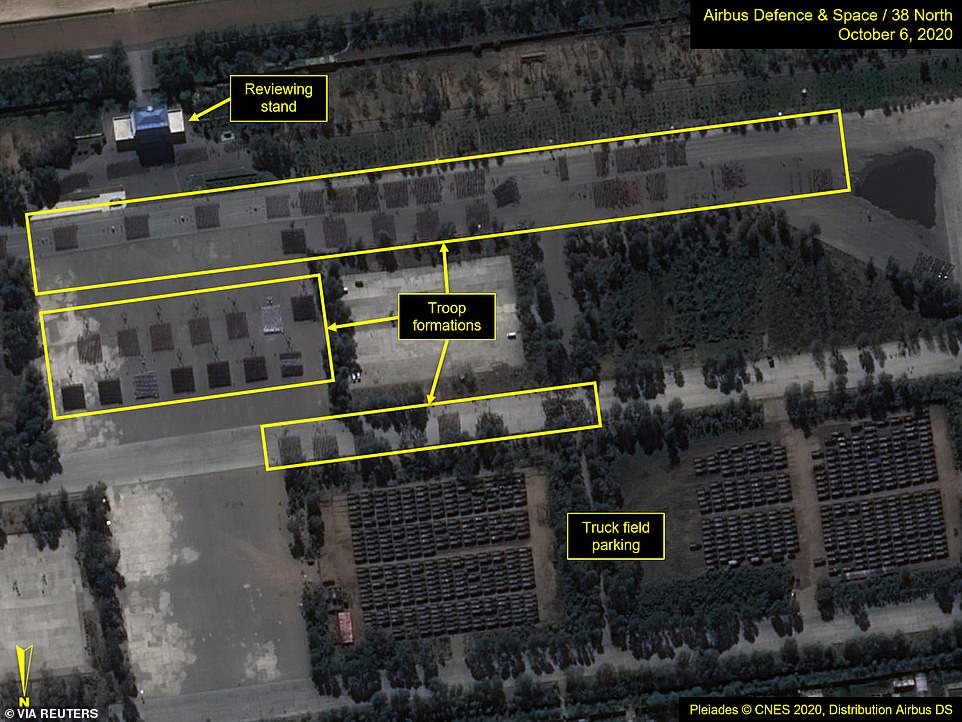 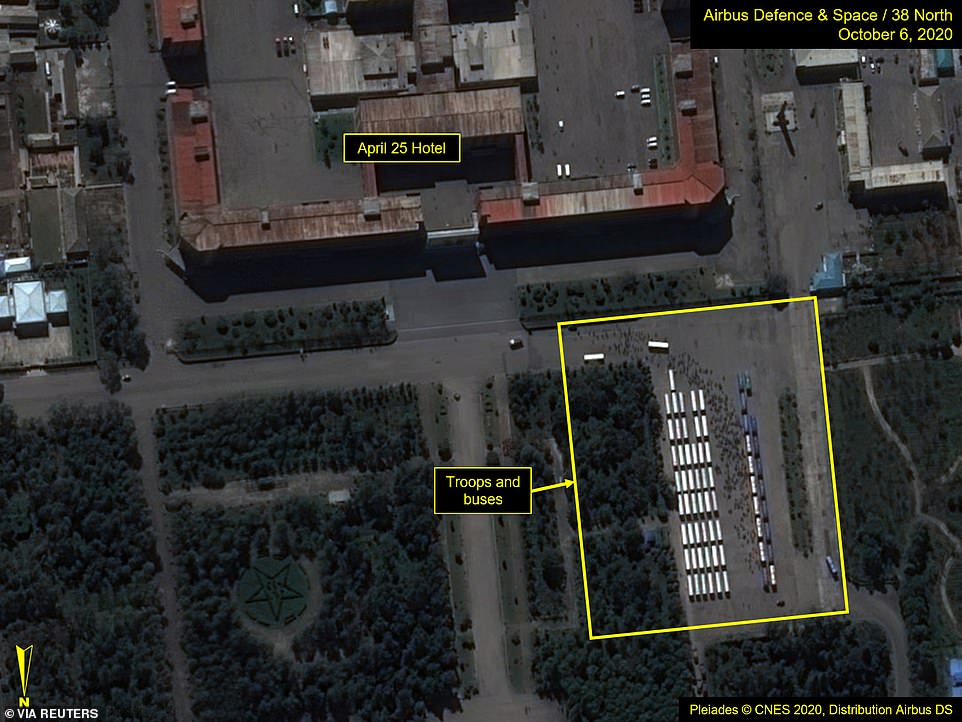 Troops have been arriving in the capital by bus and are being housed in a large hotel, where  Covid precautions are likely not being followed since the country denies having any cases 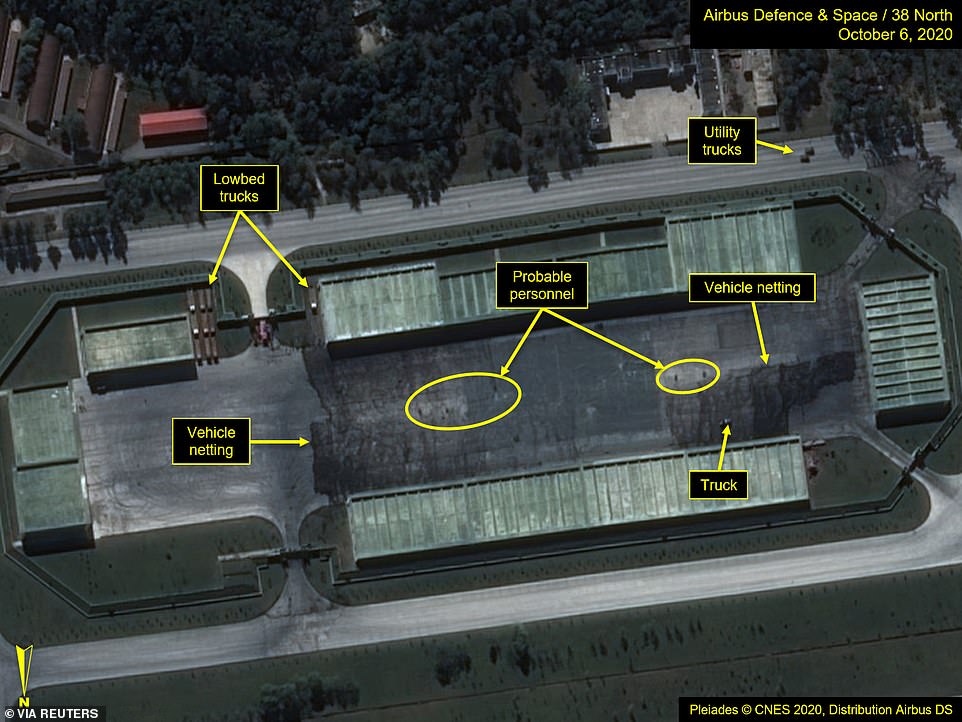 North Korea is also expected to use the parade to show off its latest missiles, which are being kept under wraps at vehicle storage compounds such as this one in Pyongyang 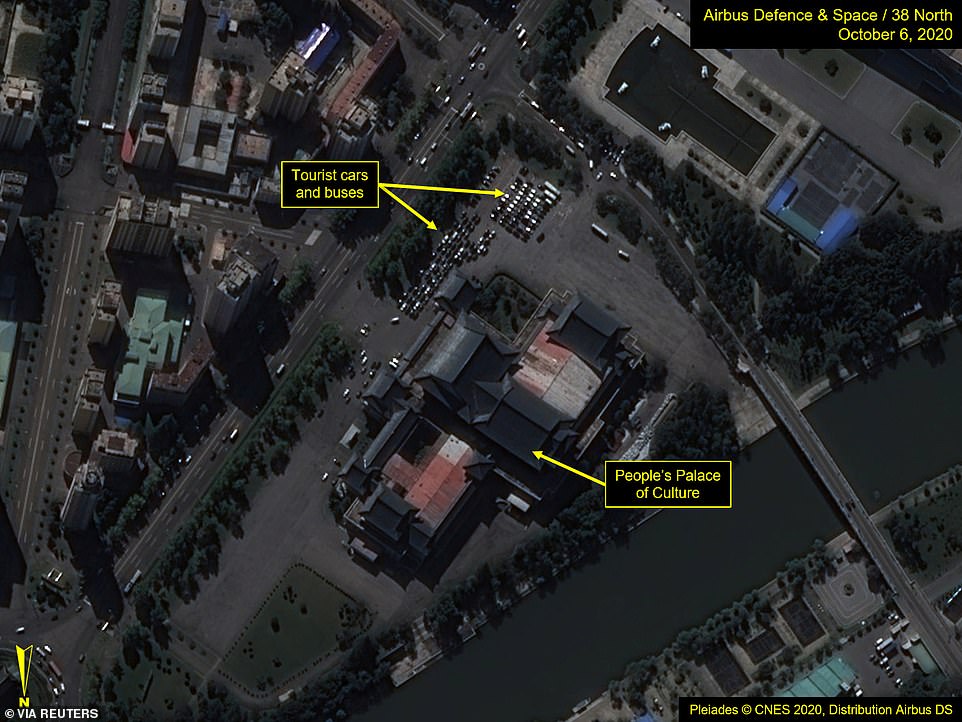 The event will also attract thousands of citizens to the capital (pictured above, tourist buses in the capital), as experts warn it could help spread the virus 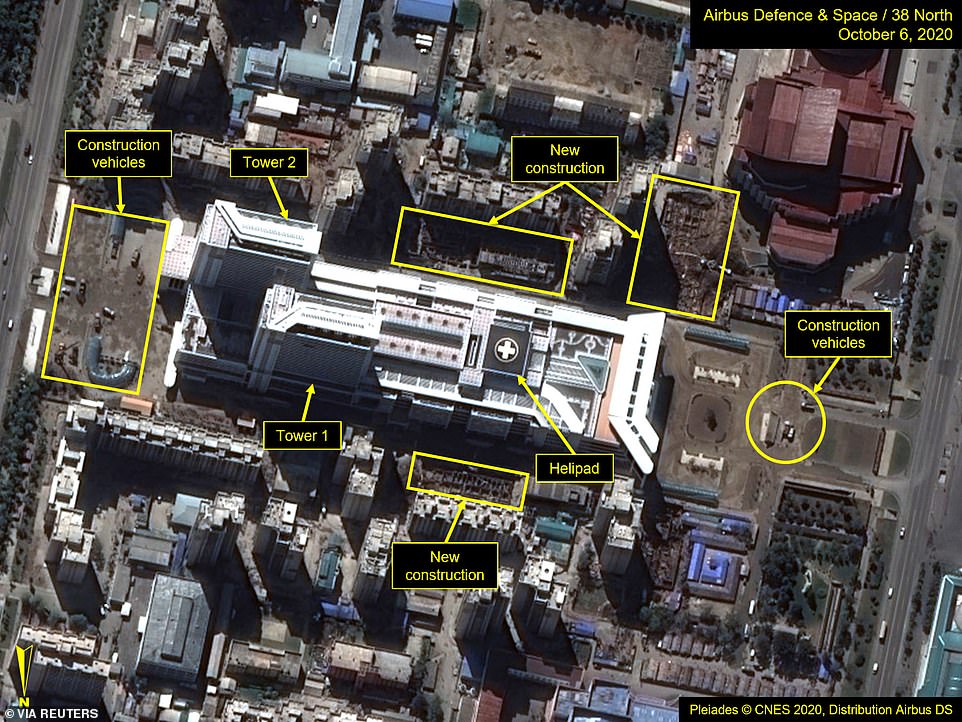 A major feature of the weekends’ celebrations is likely to be the unveiling of a major new hospital in Pyongyang, which workers are putting the finishing touches to 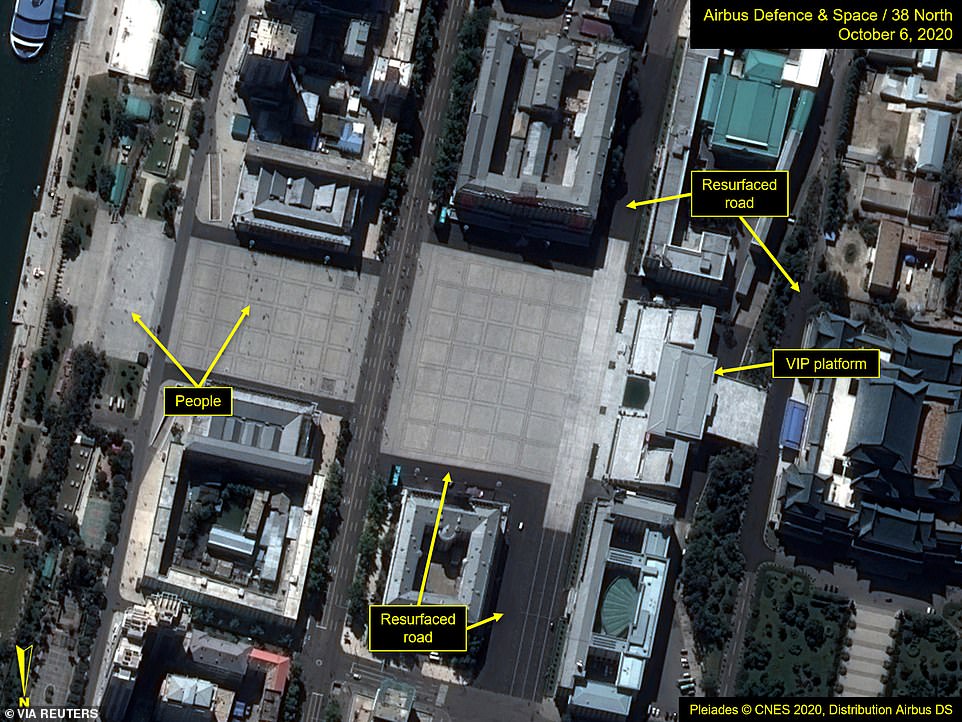 Major refurbishment works have also taken place at Kim Il-sung square, where the parade will take place, in preparation for the show 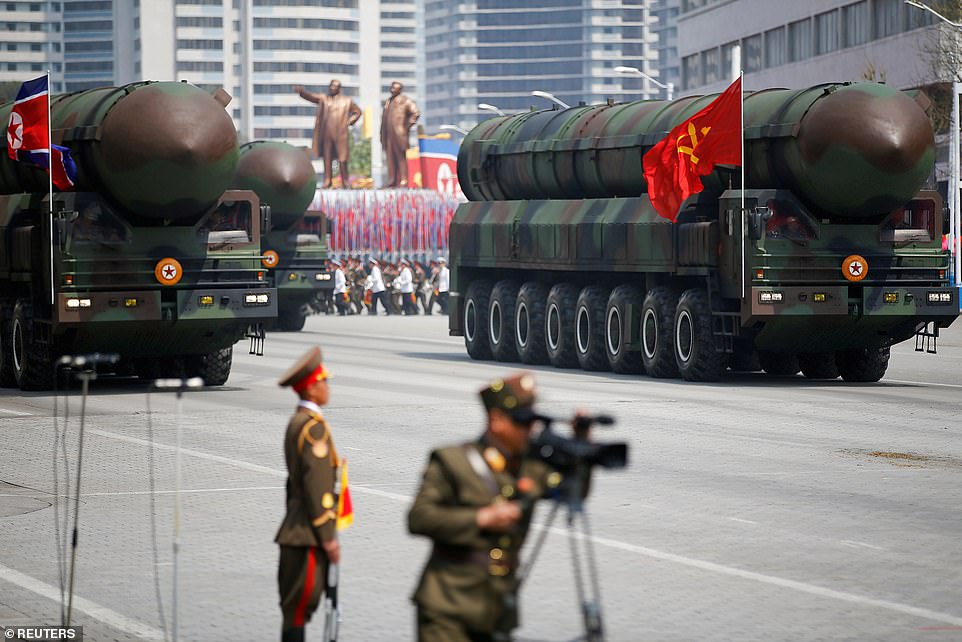 The hospital is likely far from being ‘functional’, said Soo Kim of RAND Corporation.

‘So the hospital will become another fixture of North Korea’s ‘Potemkin village’.’

Even so, the building is likely to ‘form one of the main propaganda pillars to this weekend’s events’, a report by observer group 38 North said.

Workers also carried out major renovations of Kim Il Sung Square, where the parade and other events are expected to take place.

‘Since North Korea has been affected by prolonged COVID quarantine measures and lately the floods, the leadership will really want to make the best of the upcoming celebrations to do just that.’

North Korean prisoners are forced to drink river water tainted with the ashes of their dead fellow inmates – and all for the crime of watching a foreign soap opera.

The horrific reality of life within Kim Jong-un‘s gulags was exposed by former prisoners who survived the living nightmare of Chongori concentration camp.

It’s a camp where North Koreans can find themselves locked up for acts as innocuous as watching South Korean TV or following the Christian faith. 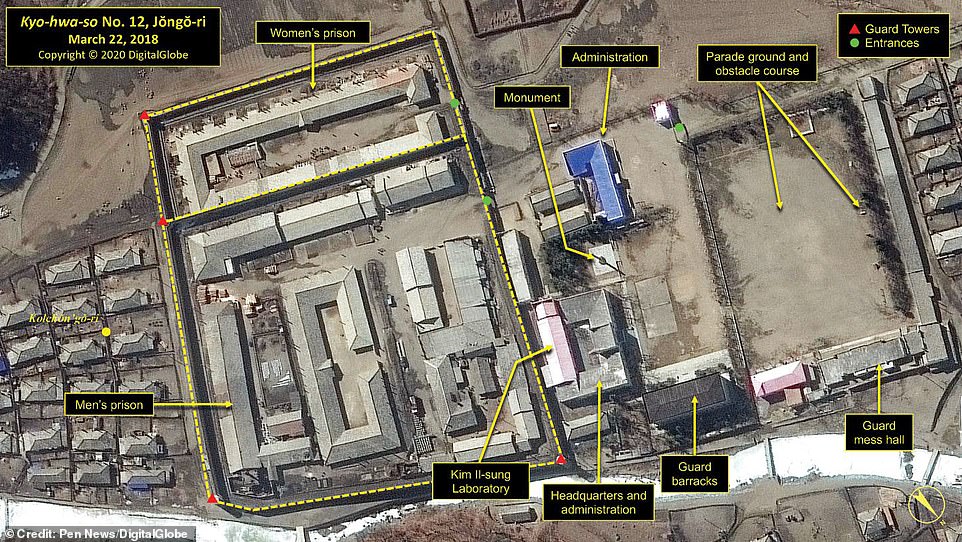 The Kyo-hwa-so (reeducation camp) No. 12 – is in North Hamgyong Province, in North Korea’s far northeast. The size of the facility is around six acres and it is estimated the 4,000 men and 1,000 women are detained there 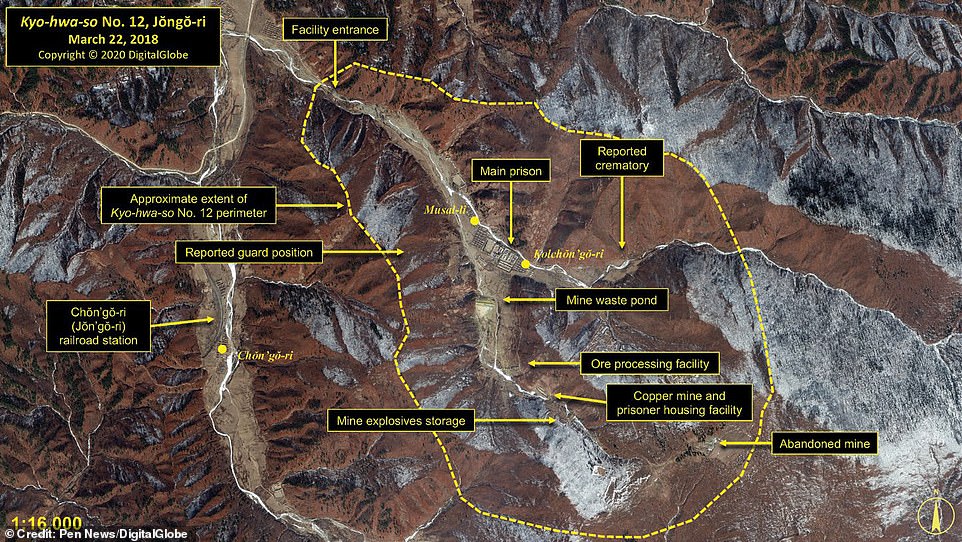 A map of worksites surrounding the main prison complex, including copper mines and a crematory

One former prisoner recalled: ‘Every Monday, we burned the corpses… there’s a place that looked like a house, and we piled the corpses in the round tank in it.

‘The facility was drenched in the smell of blood and rotting or burning corpses. ‘After burning the corpses, they stacked up ashes next to the cremation site. The ashes were used as a compost for farming.

‘When it rained, the ashes flowed into the river, and the prisoners drank the river water and used it to shower.’

They also recalled how, on rainy days, when the wood got wet, bodies would not burn as well.

On one occasion, the former prisoner even found themselves tripping over disembodied toes.

They said: ‘I fell on something. At first, I thought I was stuck on a tree, but when I looked closer, it was a toe. 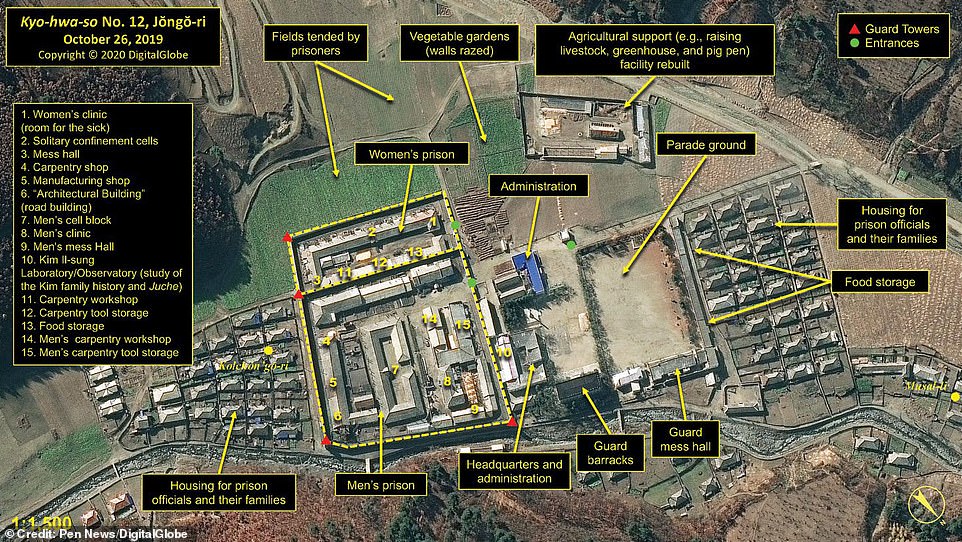 A detailed map of the facilities at Kyo-hwa-so, a gulag which houses around 5,000 prisoners

‘I climbed the mountain following the ash and there were five toes right in front of me. I was so surprised.’

Conguri has a high mortality rate due to ‘injury, illness, or physical and mental abuse by prison officials’.

The escapee, whose identity has been protected, made their horrifying disclosure in a new report published by the Washington-based Committee for Human Rights in North Korea (HRNK).

The report also revealed that the bodies of dead prisoners were piled in a storeroom prior to cremation, where they would be partially eaten by rats and decay would set in.

In addition, HRNK have used satellite imagery to reveal the location of the crematorium, the prison buildings and forced-labour worksites.

One of these worksites is a copper mine, which is believed to be further contaminating the river water that prisoners have to drink.

Joseph S. Bermudez, Jr. the lead author of the report, said: ‘We know people are suffering beyond imagination. 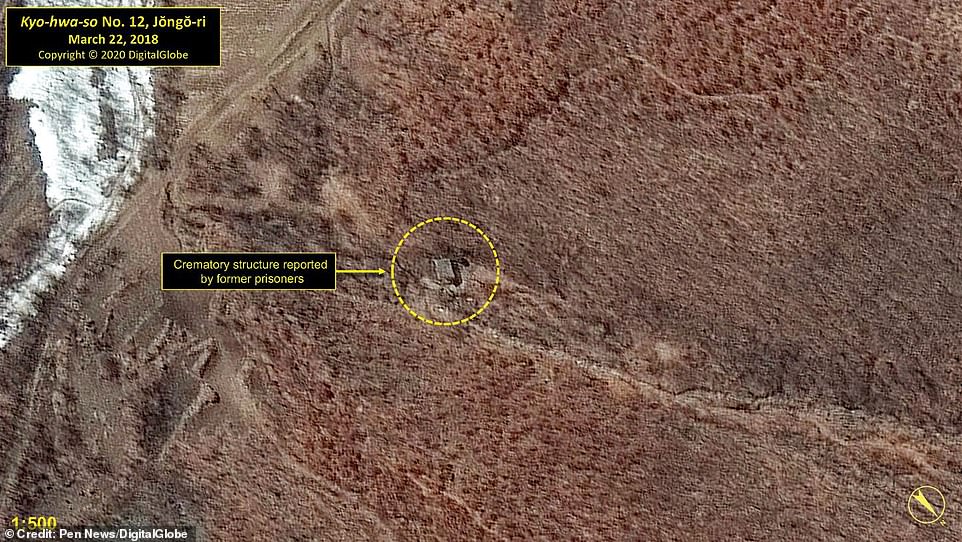 ‘The atrocities committed throughout North Korea’s vast system of unlawful imprisonment require the immediate attention of the international community.’

Amanda Mortwedt Oh, who co-authored the report, added: ‘The lack of human dignity afforded to prisoners is beyond repugnant, and the Kim regime must be held to account for such actions.’

Greg Scarlatoiu, executive director of HRNK, revealed the nature of the so-called crimes many inmates were accused of.

He said: ‘Behaviour that is perfectly normal in most other countries is criminalised in North Korea.

‘This includes practising religion, especially Christianity, and possessing a Bible, and accessing information from the outside world, in particular any South Korean material like soap operas.

‘It even includes ‘mishandling’ or ‘disrespecting’ a newspaper page containing the picture of the North Korean leader or his father or grandfather.

‘Anything along those lines results in imprisonment at a North Korean detention facility.’

Jorge Mendes, Jonathan Barnett and Mino Raiola do deals worth £400M in the transfer window

Joanna Lumley: ‘Christmas will be different, but please don’t worry’

Price: (as of - Details) Sage 50 Premium Accounting is an easy-to-use desktop accounting software,...