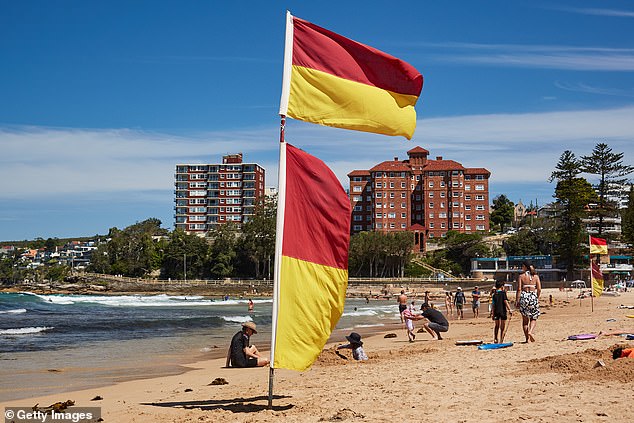 The area has been cut in two at the Narrabeen Bridge to give those outside the Avalong epicentre of the outbreak some room to breathe.

But Mayor Regan said south zone should now have the same freedoms as the rest of Sydney because there were no longer many cases there.

Beach flags raised at Manly as the Northern Beaches rules changed again on Sunday. Beaches are now open to residents for swimming and exercise along with rock pools and playgrounds

Manly beach on Sunday. The Northern Beaches council area has been split into northern and southern zones, divided by the Narrabeen Bridge. The toughest restrictions are in the north

‘I support the government 100 per cent but given the compliant behaviour we saw over the three-day restriction lift during Christmas, it’s hard to defend the return to lockdown restrictions for the southern part of the council where there are relatively few covid-19 cases,’ he told the Sydney Morning Herald.

Mayor Regan told Radio 2GB on Sunday that residents were annoyed seeing the rest of Sydney going Boxing Day shopping in Parramatta without masks on, or backpackers partying on Bronte Beach.

‘People are going: we’re doing all the heavy lifting, we’re doing everything right – can we please just have some eased restrictions particularly ahead of New Year’s Eve,’ he told The Two Murrays radio show.

‘People are getting a bit over it now, which is not a good sign.’

Large crowds pictured at Bondi Beach, Sydney, on Sunday. Northern Beaches residents are getting angry that southern suburbs get to party while they are locked down

Backpackers party at Bronte Beach in Sydney’s east on Christmas Day. Northern Beaches residents are furious that they have been doing the right thing while parties like this go on

Premier Gladys Berejiklian will next update the situation on Monday or Tuesday.

The stay-at-home order is in place until 11:59pm on Wednesday – just ahead of the last day of December on Thursday.

Mayor Regan agreed with the 2GB Two Murray’s radio hosts that some of the frequent and sudden restriction changes didn’t make sense.

On Christmas Day restrictions were eased to allow increased guests – but residents were prevented from leaving the area.

‘That was the one little quirk in it, didn’t make sense to me either, but I took it on the chin,’ Mr Regan said, adding that he trusted the science behind it and the experts who are researching the virus spread.

The rules suddenly changed again on Sunday with an exemption opening beaches, playgrounds and natural rock pools for swimming and exercise.

In the northern zone only five people may gather for exercise or recreation.

Northern Beaches Mayor Michael Regan (left) has asked for the southern zone to get the same freedoms as the rest of Sydney. NSW Chief Health Officer Kerry Chant (right) will help decide

In the southern zone, south of the Narrabeen Bridge, 10 people can gather.

No one from outside the Northern Beaches is allowed within the area without a valid reason that does not include exercise or recreation.

NSW Health Minister Brad Hazzard lives on the Northern Beaches in Dee Why, and Mr Regan said he met him three times on Sunday asking for more freedom.

NSW Premier Gladys Berejiklian will give the next review of the rules on Monday or Tuesday. The current stay-at-home order is in place until the last day of December – Thursday

The Northern Beaches could not wait until December 30 to hear about New Year’s Eve as businesses need to plan ahead to order stock and hire staff, he said – even if it’s just a temporary opening.

Mr Regan has also called for the JobKeeper subsidy to be increased to compensate Northern Beaches businesses while the area is hobbled by the stay-at-home order.

NSW had 107 active coronavirus infections as of Sunday night.

Six of the seven new local cases recorded in NSW in the 24 hours to 8pm on Saturday were linked to the Avalon outbreak, with one under investigation.

There have been 46 cases in the past seven days from overseas and 61 locally acquired.