The low cost transatlantic airline Norwegian Air faces a battle for survival this winter after being hit badly by the economic downturn caused by the pandemic.

On Monday, it revealed the country’s government declared that it will not provide additional financial support for the airline.

Norwegian Air said in August that it would run out of cash in the first quarter of 2021 unless it could secure fresh funds and has held talks with the government in the hope of winning support.

‘That the government has decided to reject the request for funds is disappointing and feels like a punch in the gut for everyone at Norwegian,’ Chief Executive Jacob Schram said.

‘The company and the board will turn every stone to get through this situation,’ Schram said, adding the carrier was not out of cash yet.

Asked whether the company was at risk of bankruptcy, Schram said he would not rule out any potential outcomes.

‘But we need ventilator support to get through the winter,’ he added.

In an update after the market closed, Norwegian announced it was furloughing an extra 1,600 staff, leaving 600 people still working at the airline.

The airline will also park 15 of the 21 aircraft it had in operation in recent months. 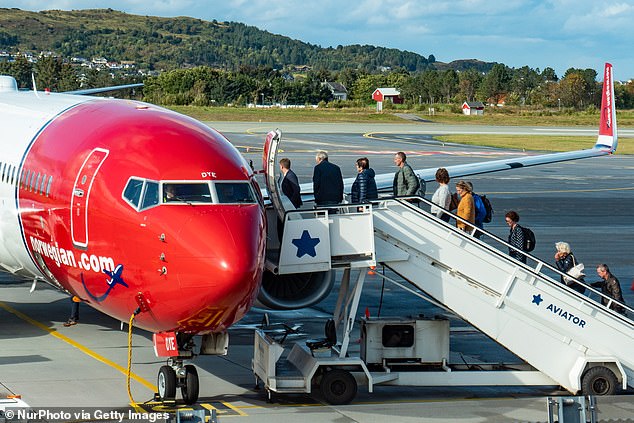 The airline would only fly 12 routes, all domestic.

Favoring free enterprise, Norway’s center-right coalition government has long ruled out any nationalization of Norwegian or other carriers and in 2018 sold the state’s remaining 10% stake in rival SAS.

‘It is a tough message to get. But we are answerable for the responsible use of public funds,’ Industry Minister Iselin Nyboe said.

‘Norwegian Air has a financial structure that makes it risky for us to go in with support. It was not defensible.’

A pioneer in low-fare transatlantic air travel, Norwegian Air’s rapid expansion left it with debt of close to $8 billion by mid-2020, making it vulnerable to the fallout from the COVID-19 pandemic.

The carrier has shown a great ability to overcome financial difficulties in the past, Transport Minister Knut Arild Hareide said. 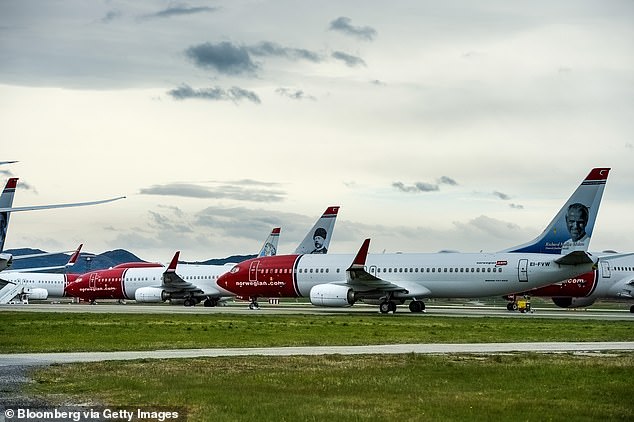 A further 1,600 staff are to be furloughed leaving 600 people at the airline

‘I don’t want to speculate on their ability to do so,’ Hareide said when asked about Norwegian’s chances of staying in operation.

Parat, a labour union for pilots and other aviation industry workers, called on the government to reconsider.

‘Wideroe, SAS and Norwegian must get help to weather the crisis,’ said Parat leader Unn Kristin Olsen. Wideroe is a regional airline.

Creditors and lessors took control of Norwegian in May with a financial rescue that allowed it to access state-guaranteed loans of 3 billion crowns ($329 million) as the company sought to operate a slimmed-down service.

Norwegian has grounded more than 100 grounded aircraft, including its entire fleet of 37 Boeing 787 Dreamliners used for transatlantic journeys.

It was not surprising Oslo had withdrawn support after the failure of Norwegian’s bid to become a pan-European airline serving intercontinental markets, said Bertrand Grabowski, a former aviation banker who is now an independent adviser.

‘You can perhaps use Norwegian taxpayers’ money to support a regional airline, but not one serving Paris-New York or London-Buenos Aires (routes),’ he said. 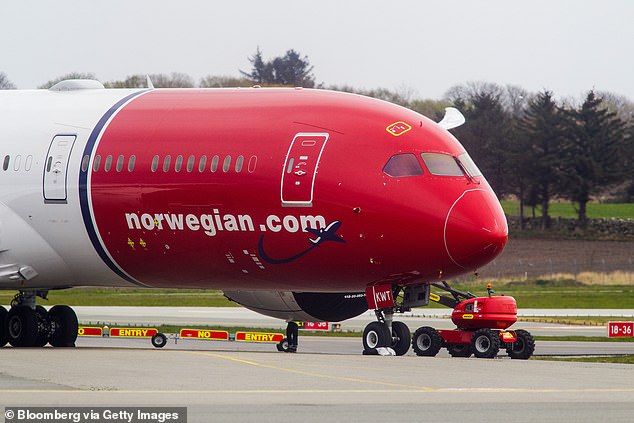 The company will use just 6 of the 154 aircraft on its books and will fly just 12 domestic routes, down from 149 when the airline was at its height

Airlines are particularly crucial infrastructure in Norway, the geography of which stretches more than 1,367 miles across fjords and mountains with few train lines to transport people.

‘Even if they had put in a bit more money for the winter, it likely wouldn’t have been enough,’ he said, adding that a bankruptcy would leave aircraft lessors stuck with planes they won’t be able to place.

However, a last-minute government intervention shouldn’t be ruled out entirely, Roeska said, adding that ‘the door is never closed’ until bankruptcy is confirmed.

The company has said that more funding could come from the sale of aircraft, conversion of more debt to equity or from its owners and the Norwegian government, while declining to specify the amount it might seek.

Having grown rapidly to become Europe’s third-largest low-cost airline and one of the few to apply the budget model to transatlantic flights, Norwegian Air is fighting for its survival again after the Oslo government on Monday ruled out further support.

Following are key dates in the company’s 27-year history.

Aug. 28: Norwegian Air says it will need to secure funding this year for the next 18 months or more to see it through the COVID-19 pandemic after reporting first-half losses of $610 million.

May 18: Norwegian Air completes a cut-price share sale and wins bondholders’ backing for a refinancing, allowing it to continue operating with a slimmed-down schedule.

March 16: Norwegian says it is cancelling 85% of its flights and temporarily laying off 7,300 employees because of the coronavirus outbreak.

March 5: Company scraps its 2020 earnings guidance and cancels some of its transatlantic flights.

Feb. 13: Norwegian says it will make deeper capacity cuts in 2020 than previously announced as it aims to return to profit after three consecutive years of losses.

Nov. 20: Appoints Jacob Schram as CEO. Schram, who does not have a background in aviation, had worked for consulting company McKinsey among previous roles.

Nov. 5: Raises 2.5 billion Norwegian crowns to meet its cash needs through 2020 with its third share sale in two years and a bond issue.

Sept. 16: Norwegian’s bondholders accept the company’s plea to postpone repayment of $380 million by up to two years. Aug. 19: Agrees to sell its stake in banking company Norwegian Finans Holding for 2.22 billion crowns.

March 12: Norwegian grounds its Boeing 737 MAX 8 jets after a fatal crash of an Ethiopian Airlines 737 MAX.

Feb. 18-19: Norwegian announces deep-discount share issue at only a third of the market price.

Jan. 24: International Consolidated Airlines Group (IAG), the owner of British Airways, says it will not make a bid for Norwegian and will sell its stake in the company.

May 4: Board confirms that it has received two separate conditional proposals from IAG Group in relation to an acquisition of 100% of its share capital.

April 12: Norwegian is notified that IAG has acquired 4.6% of the shares in the company.

Norwegian raises 1.3 billion crowns in a share sale to help to fund its expansion and cope with higher fuel costs after warning of a larger than expected loss in the quarter.

Jan. 25: Norwegian orders 122 planes from Boeing, 100 of which are Boeing 737 MAX 8 jets. The airline also enters agreement with Airbus about buying 100 Airbus A320neo jets. In total, the planes are worth 127 billion Norwegian crowns.