The 49-year-old Tesla CEO and SpaceX founder – and one of the world’s richest men – had been a controversial choice to appear on SNL amid a pandemic.

And critics online were unimpressed with his delivery, with one blasting: ‘Now everyone knows he’s not funny, witty or clever’.

Lorne Michaels, the SNL producer, was singled out for particular ire.

‘I don’t care how much Lorne Michaels wants to go into space, tonight is unforgiveable,’ said one.

Musk opened his monologue by mocking his monotonal speaking style, saying no one can tell when he’s joking.

‘It’s great to be hosting ‘Saturday Night Live,’ and I really mean it,’ said Musk standing on the stage in a black suit with a black T-shirt.

‘Sometimes after I say something, I have to say that I mean it.’

Elon Musk has delivered his monologue on Saturday Night Live, poking fun at his own eccentricities and appearing to confess that he has ‘Asperger’s’ 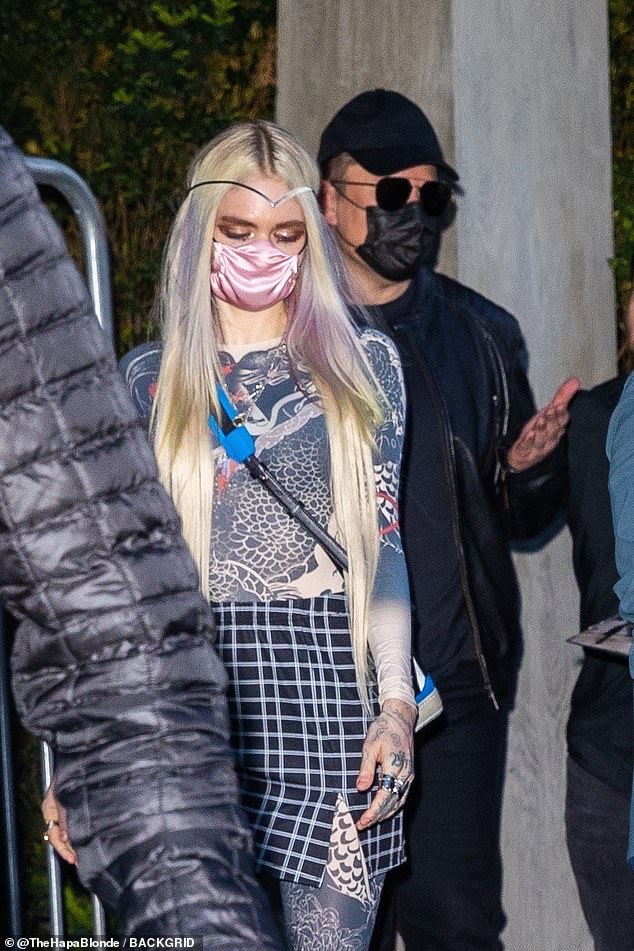 Canadian singer Grimes, 33, appeared in one sketch alongside her 49-year-old boyfriend 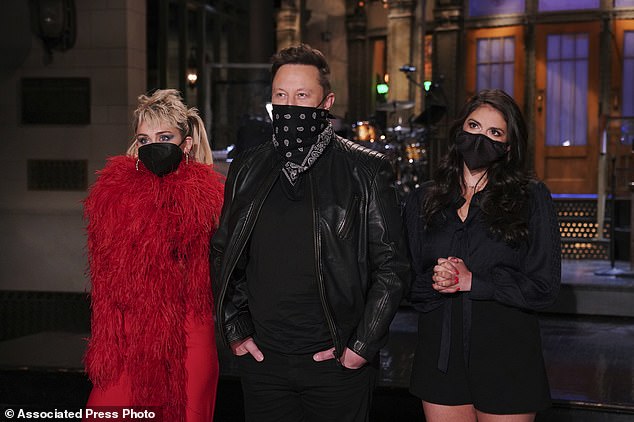 He added, in explanation, that he is the first person with Asperger’s syndrome to host the show:

‘Or at least the first person to admit it,’ he said.

It may have been the first time Musk has publicly said he has the mild form of autism. But at least one former ‘SNL’ host, Dan Aykroyd, also has talked about having Asperger’s.

And despite his admission, social media remained annoyed by Musk’s appearance.

One Twitter user described Musk as ‘a real life Bond villain’, while another responded with a photo of Joaquin Phoenix as The Joker.

‘This is the bad place,’ said another, with a meme from the show The Good Place.

‘Perhaps at 76 Lorne Michaels’ run at deciding what is funny is over…’ said another.

Yet others approved of his performance.

‘Somehow Elon Musk managed to be funnier than the entire SNL cast, who trained their entire lives just to be sketch comedian/comediennes and haven’t sent rockets into space & back or running revolutionary electric car companies or infrastructure for hyperloop-based transportation,’ said one fan. 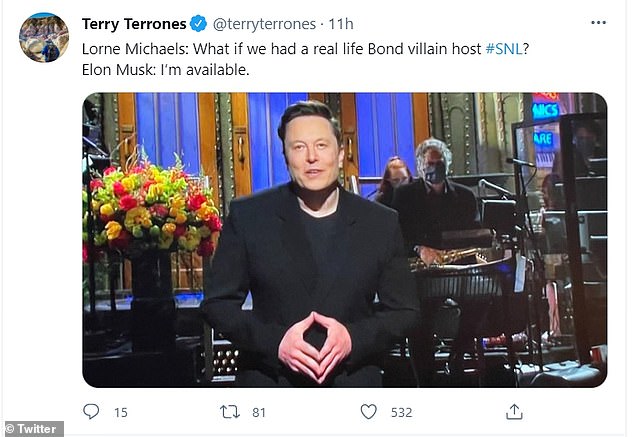 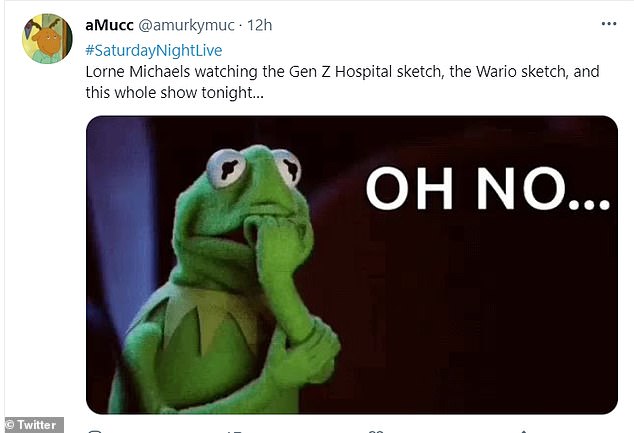 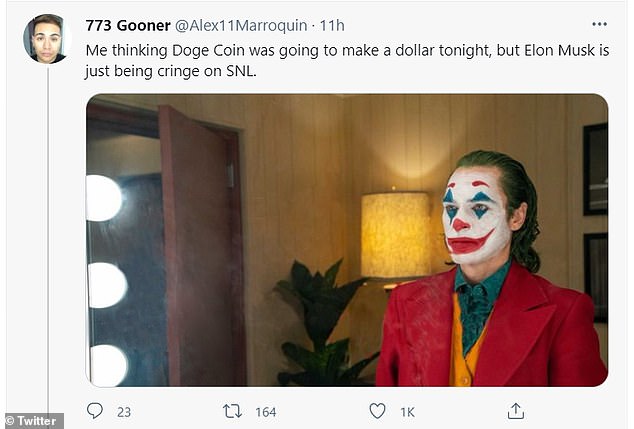 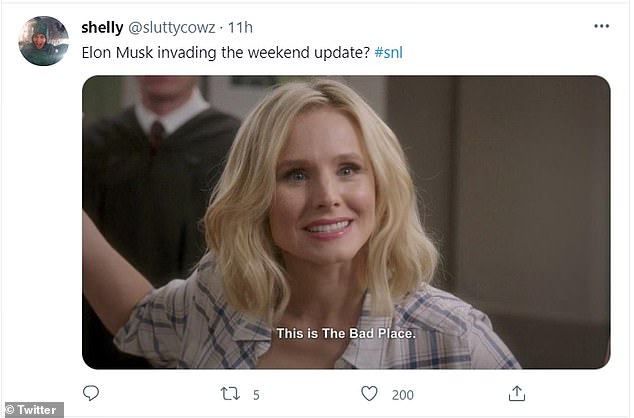 Musk also joked about his Twitter account, which has more than 50 million followers, and the tweets that led some critics to object to his being invited to host the show.

‘Look, I know I sometimes say or post strange things, but that’s just how my brain works,’ he said.

Then Musk added a boast that got his biggest laugh of the night, and an applause break from the studio audience.

‘To anyone who’s been offended, I just want to say I reinvented electric cars, and I’m sending people to Mars in a rocket ship,’ Musk said.

‘Did you think I was also going to be a chill, normal dude?’ 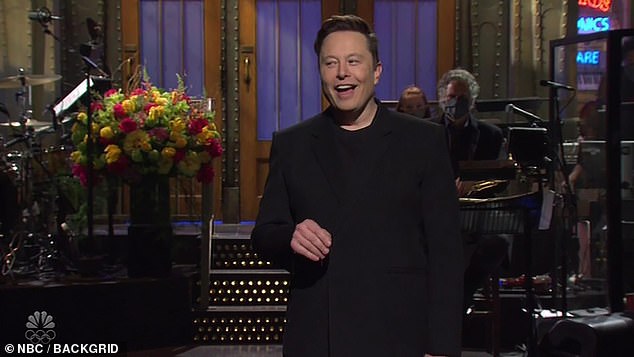 Musk referenced his unconventional tweets, and said: ‘Did you think I was also going to be a chill, normal dude?’ 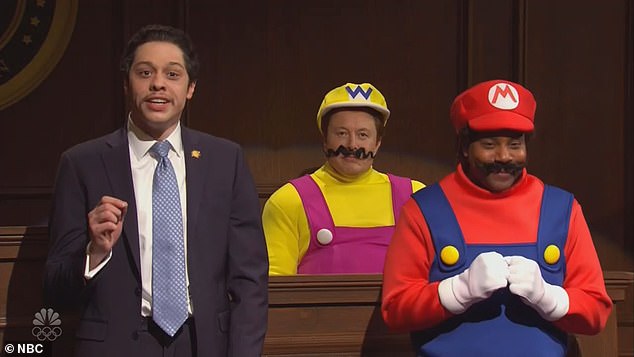 Musk portrayed Wario (center) in one sketch, with the Nintendo character facing a murder charge in court 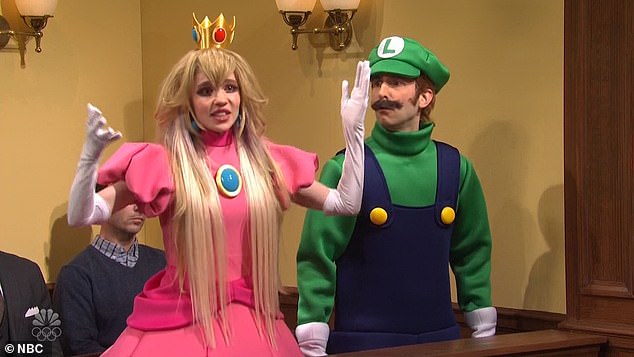 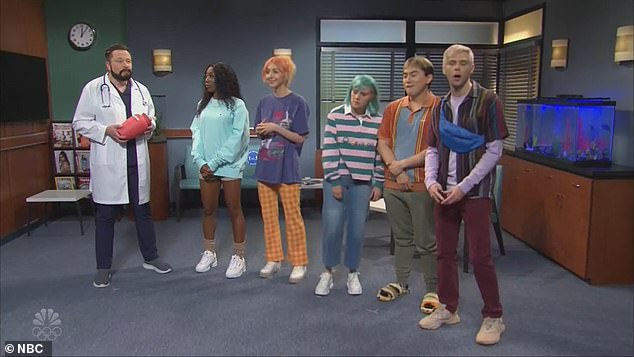 In another sketch, he appeared as doctor at ‘Gen Z Hospital’, delivering bad news in youthful slang to a group of teens 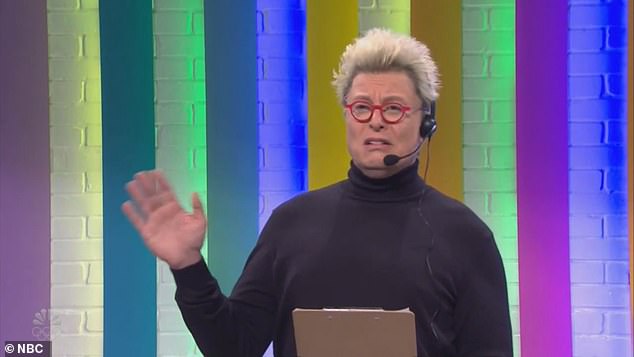 In another sketch, Musk portrayed a producer named Ragnarok on a bizarre Icelandic talk show, on which he proclaimed his love for the host Ooli 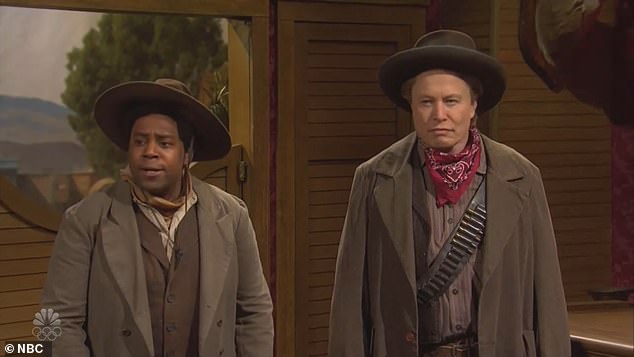 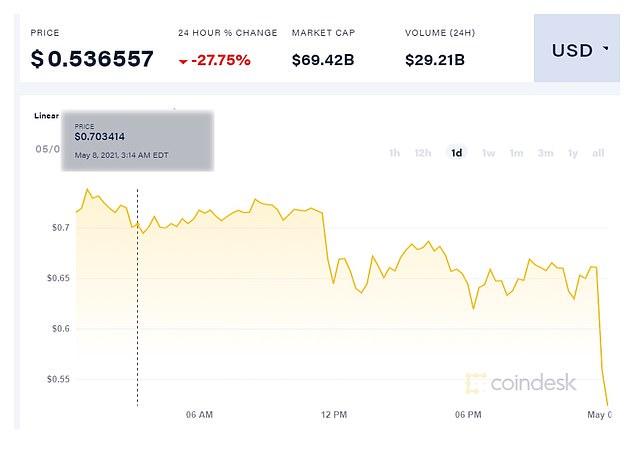 The value of Dogecoin dropped sharply as Musk spoke, losing more than 20% of its value

During the Weekend Update segment, the first joke took aim at Musk, with Colin Jost noting that a Chinese rocket booster had crashed into the Indian Ocean just before the show aired live from New York.

‘For once we know it’s not Elon’s fault,’ said Jost of the uncontrolled reentry of the Long March 5B rocket stage.

‘A lot of people have been wondering, why is he hosting our show and now we know, it’s because he needed an alibi,’ he joked.

Musk didn’t appear in the show’s unconventional and heart-warming cold open, in which cast members and their moms did brief bits for Mother’s Day as musical guest Miley Cyrus sang her godmother Dolly Parton’s inspirational ‘Light of a Clear Blue Morning.’

But Musk brought his own mother, model Maye Musk, on stage to talk about what he was like when he was 12.

The casting choice brought criticism from those who felt the show was celebrating a man for his exorbitant wealth in a time of great inequality and a man who spread misinformation to his huge Twitter following as he downplayed the severity of the coronavirus pandemic.

Playing on Musk´s reputation as an innovator, NBC live-streamed the episode globally on YouTube, the first time ‘Saturday Night Live’ has ever been viewable simultaneously around the world.

Musk took his first stiff stab at acting in the show’s first sketch, a mock soap called ‘Gen Z Hospital,’ playing a doctor in a fake beard who delivered bad news to a group of youths in their own lingo.

‘You all might want to sit down, what I’m going to say might be a little cringe,’ Musk said. ‘Your bestie took a major L.’

He had small roles in subsequent sketches. He played one of a party full of people out for the first time after quarantine, and he did a German-ish accent in a bleached, spiked wig as the director of an Icelandic talk show.

And on ‘Weekend Update’ he played a character close to himself, donning a bow tie and glasses as a financial analyst named Lloyd Ostertag, throwing an extended plug for Musk’s favored cryptocurrency dogecoin. 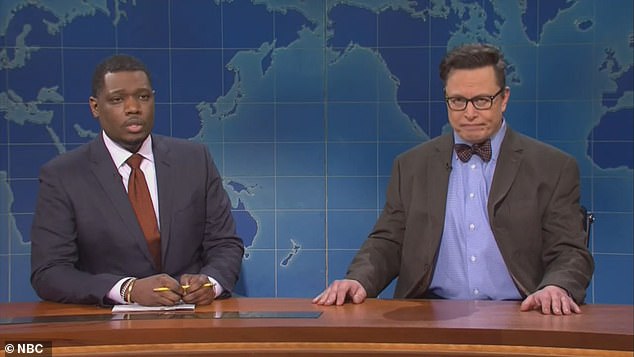 In the Weekend Update segment, Musk appeared in the character of ‘financial expert Lloyd Ostertag’ to explain cryptocurrencies including Dogecoin 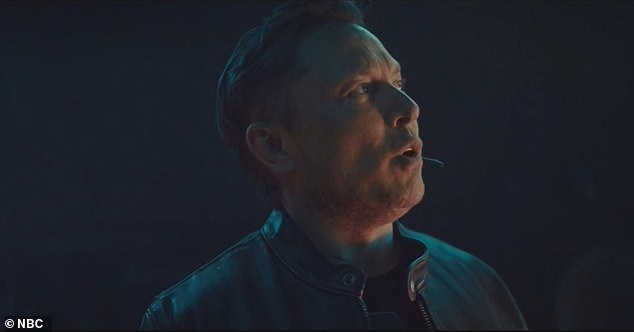 In one digital short designed as a trailer for a movie titled The Astronaut, Musk plays the steely ground controller for a Mars mission whose fate lies in the hands of a bumbling astronaut named Chad, played by Pete Davidson 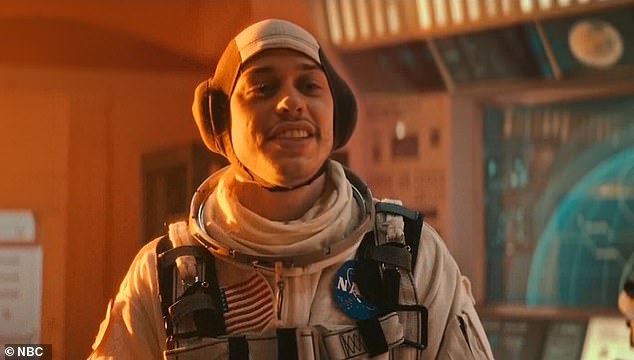 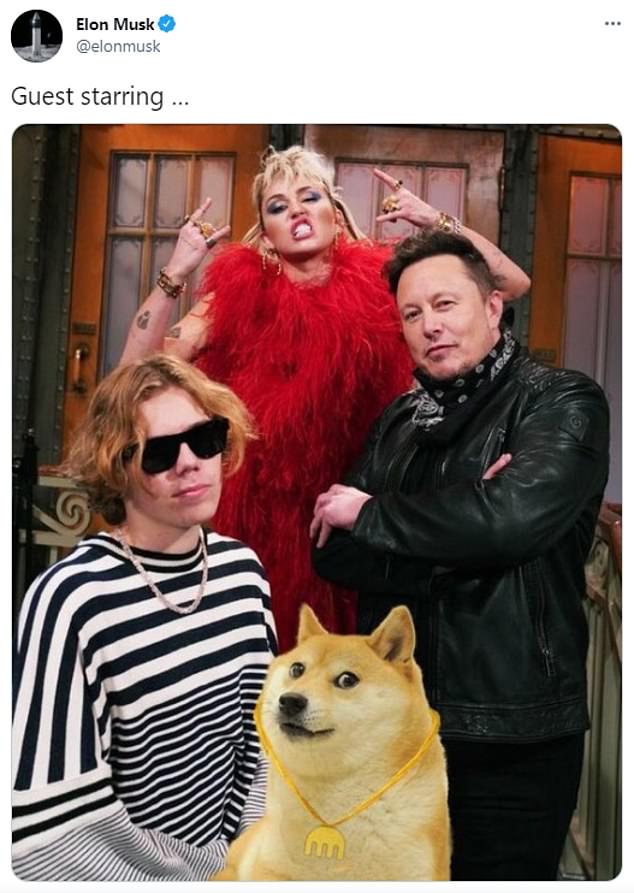 Musk posted a photo of himself, musical guest Miley Cyrus and Australian rapper The Kid Laroi along with the Shiba Inu dog from the meme that inspired the creation of Dogecoin

Dogecoin’s price, which has been volatile all year, tumbled 23% in the hour after the show began, and fell further on Sunday.

While Musk is likely the wealthiest host of the show ever – Forbes Magazine puts his fortune at $177 billion – several other business leaders, politicians and other non-entertainers have hosted the sketch comedy institution in its more than four decades on the air.

Steve Forbes, a publishing executive from a wealthy family and a longshot presidential candidate, hosted in 1996.

Donald Trump hosted twice, in 2004 as businessman and host of ‘The Apprentice’ and in 2015 as a presidential candidate.

The show’s sketches began making him their primary target the following year, but the choice to team with him has brought harsh criticism in the years since.

Union Jack flag must be flown on all government buildings, UK decrees

Head bowed, his hands handcuffed behind his back and wearing a black face mask and bullet-proof...