Nottingham is now England’s coronavirus hotspot and more than one in every 145 people in the city are carrying the virus, according to the latest data.

The Midlands city hasn’t ever had a local lockdown, avoiding the fate that befell nearby Leicester, but officials are now calling for more to be done.

According to test data analysed by the Press Association the city now has an infection rate of 689.1 cases of coronavirus for every 100,000 people.

This puts it above areas including Knowsley in Merseyside (601), Liverpool (579), Manchester (543) and Newcastle (499), which are all expected to face tougher lockdown rules from Monday which may include pub closures. 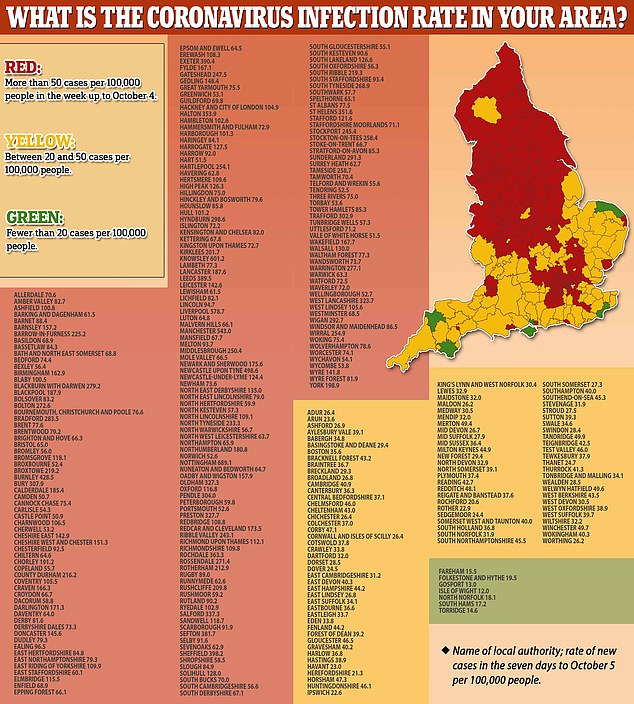 Data suggests Nottingham’s outbreak is increasing quickly, with Public Health England’s report suggesting the rate was 424 cases per 100,000 by October 4 after it being just 95 the week before.

The city is home to two universities and at least 425 students and eight members of staff have tested positive at the University of Nottingham, while an unconfirmed number of people have been diagnosed with Covid-19 at Nottingham Trent.

David Mellen, the city’s council leader, was alarmed by the soaring cases and said the Government needed to act urgently to stem the spread of the illness.

Department of Health data shows that 757 people tested positive for coronavirus in Nottingham today, to a total of 1,979 over the past seven days. 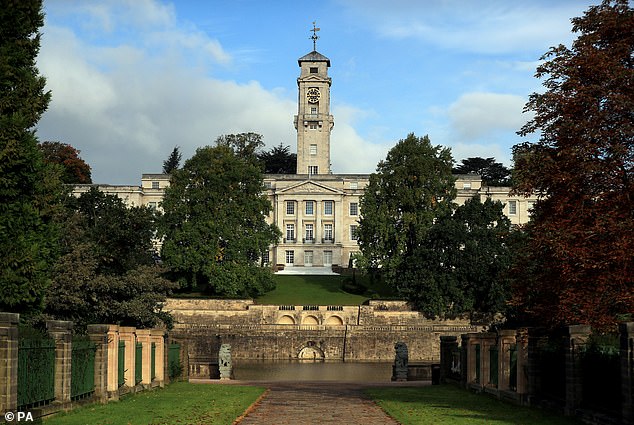 ‘It seems like we’re victims of a Government change of approach,’ said Mr Mellen, a Labour Party member on the council.

‘Even though we’ve got very high numbers that we’ve known about since the beginning of the week, we’ve got to wait until next week for Government to bring in what we expect will be new restrictions in Nottingham.’

Waiting until next week could allow the virus to spread even further, he said, adding: ‘There is a chance this weekend that people might think this is the last chance before Christmas, let’s go out and party – and we can’t have that.’

The new rates of infection are calculated using positive test results from the past seven days and comparing them to the population of the area.

They include test results up to October 5 and show 2,294 new cases were recorded in Nottingham in the seven days to October 5 – the equivalent of 689.1 cases per 100,000 people.

The infection rate in Nottingham will raise questions about the emerging north-south divide in coronavirus rules in England.

Much of the North is expected to face tougher rules from Monday, with pubs, restaurants and hospitality businesses likely to see curfews brought forward or total closures.

But the South of the country remains relatively untouched by anything except rules on social distancing.

It is not clear what rules will be set in Nottingham, which falls outside of the Northern regions, but the council there says it is expecting tougher limits.

Mr Mellen continued: ‘We need Government to act urgently and decisively or better still, give us the powers to let us get on with taking the action ourselves.

‘It unnecessarily places a huge burden on our local resources to manage the clear potential for people to decide to go out and socialise one last time this weekend before local measures are introduced, which runs the risk of making a bad situation even worse in terms of infection rates.

‘All we can do is urge people to do the sensible thing and stay at home. This deadly virus is now rife in our city and you are putting yourselves and others at risk unless you take this seriously and follow the strict guidance that’s in place.’

AREAS WITH THE HIGHEST INFECTION RATES

AREAS WITH THE LOWEST INFECTION RATES

Director of public health for Nottingham Alison Challenger said there was ‘no need’ to wait for Government restrictions and urged people in the city not to mix with other households.

She said: ‘Our latest surveillance report published today shows that last week the number of cases in the city shot up to 1,600 from just under 300 the week before.

‘That’s a dramatic increase, even allowing for any data glitches, and it’s abundantly clear that stricter measures are needed.

‘We need local people to continue to stick to the existing rules as they have done overwhelmingly so far.’

Ms Challenger continued: ‘In addition, we have said that because of the concerning rise in local positive cases and infection, everyone needs to stick rigidly to their social bubbles and not mix with other households.

‘There is no need to wait for additional Government restrictions – it is clear that infection rates are rising which means that we need to do more than we have been so far in Nottingham to curb the spread of the virus.

‘We are seeing an increase in Covid patients being admitted to hospital locally which is of serious concern.’

NHS hospitals in Blackpool are treating up to 65 per cent as many patients as they were at the peak of the outbreak in April, statistics show.

In Newcastle and Liverpool, admission rates are nudging closer to numbers not seen for six months as the second wave of Covid-19 rips through the North of England.

Cases of the disease have been rising markedly since mid-August and, as it works its way deeper into society and reaches older age groups, greater numbers of people are being admitted to hospital. Figures suggest one in four people who test positive in the UK end up in hospital.

At Blackpool Teaching Hospitals, 17 infected patients were admitted on September 28, 61 per cent of the peak level of 28 seen on May 23.

The data comes from a monthly NHS report and admissions have continued to rise in the first week of October but their locations are not yet publicly available.

A vast majority of NHS trusts – 153 out of 206 – admitted an average of one or no patients per day during that period, showing that a small number of hospitals are making up almost all of the rise in patients.

It comes as leaked public health documents have warned parts of the North West could see admissions surge past their worst levels before the end of this month if more action isn’t taken.

Local officials say it is ‘extremely likely’ that the number of inpatients will rise above 3,000 in October – higher than the maximum 2,890 in April and possibly double to 6,000, according to a report seen by the Health Service Journal.

Public health staff said it may even be too late to stop this happening because so many people are already infected.